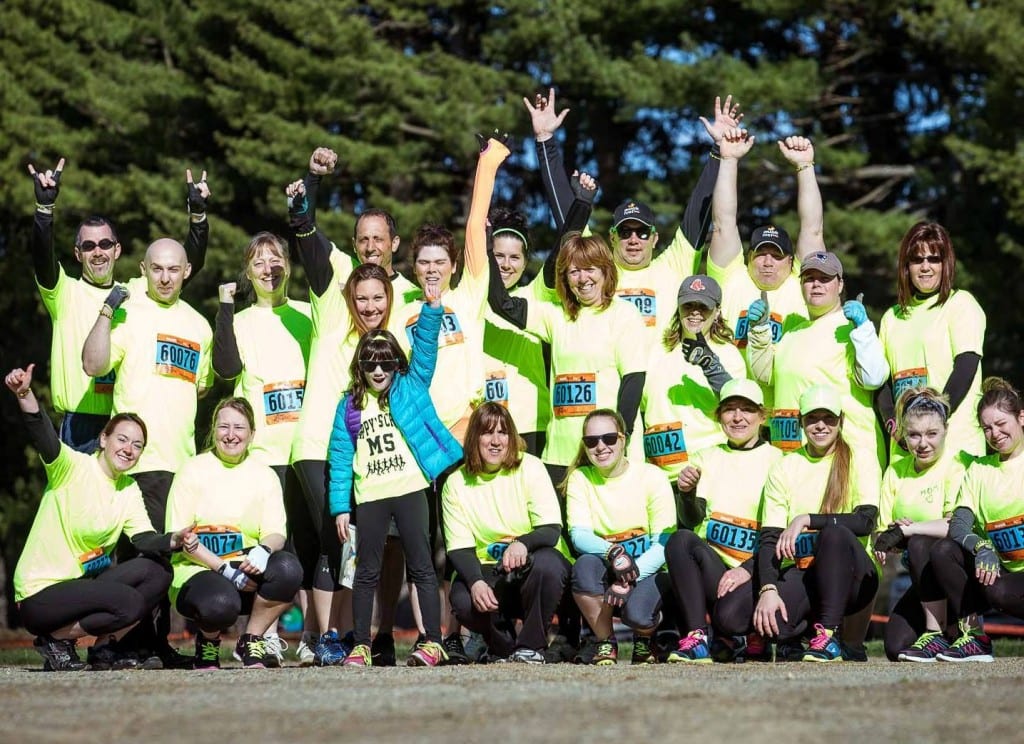 For the third consecutive spring, Muckfest MS returned to the New England area. After a long and snowy winter, the national race series has quickly become the unofficial start to the obstacle race season for many runners. They remain one of the few races that are popular enough to successfully span over both weekend days. Along with being an entertaining event, the primary focus of Muckfest is to raise money and awareness for Multiple Sclerosis, with 100% of the team fundraising dollars supporting the charity.

The event returned to the athletic complex in Devens, MA. The spacious venue offered plenty of space for runners and spectators. The parking lot was located on-site and only a short walk away. Muckfest also remains one of the only racing series that offers both free parking and free spectator access – definitely a rarity these days! Registration moved swiftly with volunteers checking people in electronically. With no waivers to hand in, runners simply showed their ID to receive their packets. Spectators were allowed to roam freely around the complex and many of the obstacles were easily accessible, making for great photo opportunities. Muckfest is primarily a team event, with many running in honor of loved ones that suffer from the debilitating disease. It's important to reiterate that the event is a fundraiser first and an obstacle course race second. Runners need to understand that going in and set their expectations accordingly. The obstacles may not be particularly challenging for the seasoned racer but the event is geared more towards fun than competition, all in an effort to raise money for a very worthy cause. 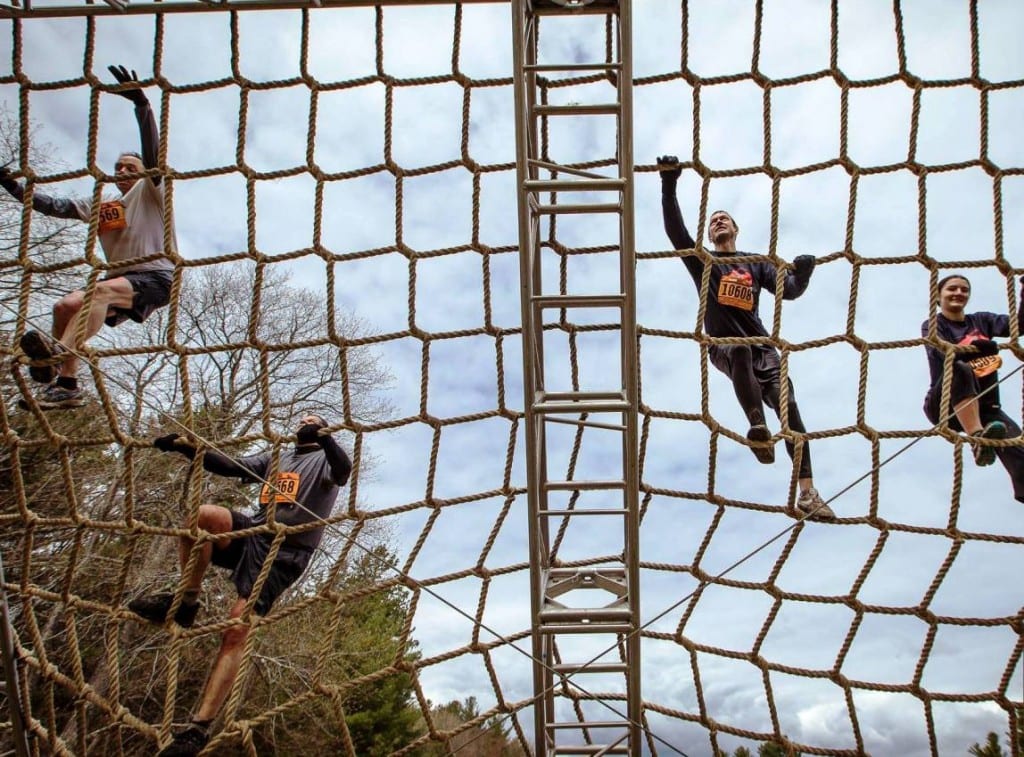 Prior to being sent out on the course, the MC was keeping the mood light with jokes and games before releasing runners. He also acknowledged the highest fundraising teams in each of the waves. The majority of the course followed the same route as previous years but had a few new obstacles and updates to some of the returning ones. The course was well marked with signs and caution tape and there were plenty of friendly and enthusiastic volunteers stationed throughout the course. The trail runs where relatively flat but they did have a few challenging hill inclines and declines. Anyone familiar with the race recognized some of the returning obstacles including Big Balls, Spider Web, Tight Rope, Skid Mark and Dragon Crawl. The popular Spinner obstacle was updated to include suspended rings instead of rope. Unfortunately, many of the participants chose to grab two rings instead of one which caused an immediate bottleneck. Another fun twist (literally!) was on the tube crawl. Instead of simply climbing through the corrugated tube, volunteers and other runners were also spinning it “fun-house” style making it much more difficult.

Surprisingly though, with a name like Muckfest, there was a distinct lack of mud. The only two mud-related obstacles occurred right at the end which I’m sure was strategically done for the post-race photos. While there was little mud, there were plenty of water obstacles and, with the cool temperatures, they became the most memorable of the day. The Muck Off obstacle involved simply leaping off a six foot high platform into a pool of frigid water. 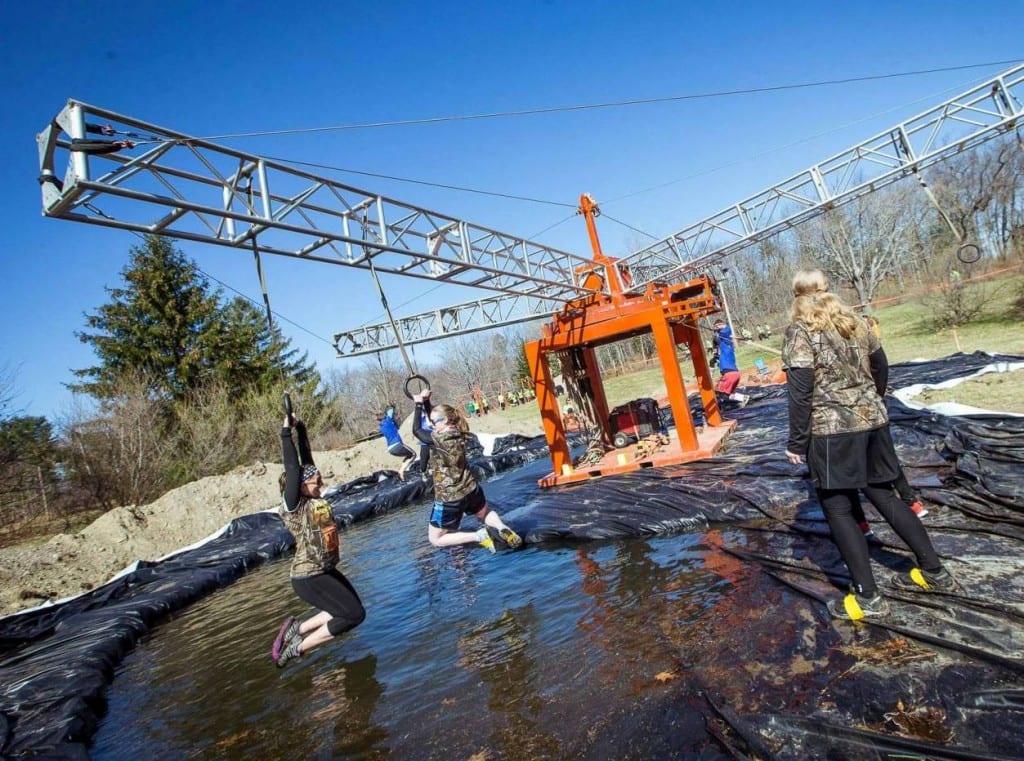 The returning Swing Set obstacle had participants swinging on a movable platform and propelling themselves into the pool below. On most of my reviews, I usually include a short video of the event. However, after cannonballing off the platform, I lost both my sunglasses and GoPro in the murky water. The water was too damn cold and deep to spend time searching for them. I was overdue for a camera upgrade anyway!

(Update: I was contacted my Muckfest that they found my camera and I’m in the process of getting it back!. Love these guys!!)

In my opinion, the new Flying Muckers zip-line obstacle was the best of the day. Muckfest is the first race I’m aware of that has successfully implemented a zip-line. It traveled over a stretch of water but it did not extend to the end of the pool, forcing runners to drop in the waist-deep water. The handles remained connected to the zip-line and automatically returned to the start, thereby eliminating any back-ups at the obstacle. My only criticism is that I wish it was longer! Another new obstacle this year was Shake and Quake, a balance bridge suspended over water. Move too slow and you may get blasted by the water cannons shooting up from below. The final new obstacle, Crash Landing, involved leaping into a giant inflatable stunt bag from a platform. Participants could choose between the lower or higher platform.

Unfortunately, some of the obstacles had some serious bottlenecks. Both of the cargo nets had substantial lines and so did the final Crash Landing obstacle. While backups are to be somewhat expected, especially for a popular and untimed event, some of them extended over 20 minutes. With the cool conditions and being soaked from the previous obstacles, the long waits were frustrating to many racers, this one included. 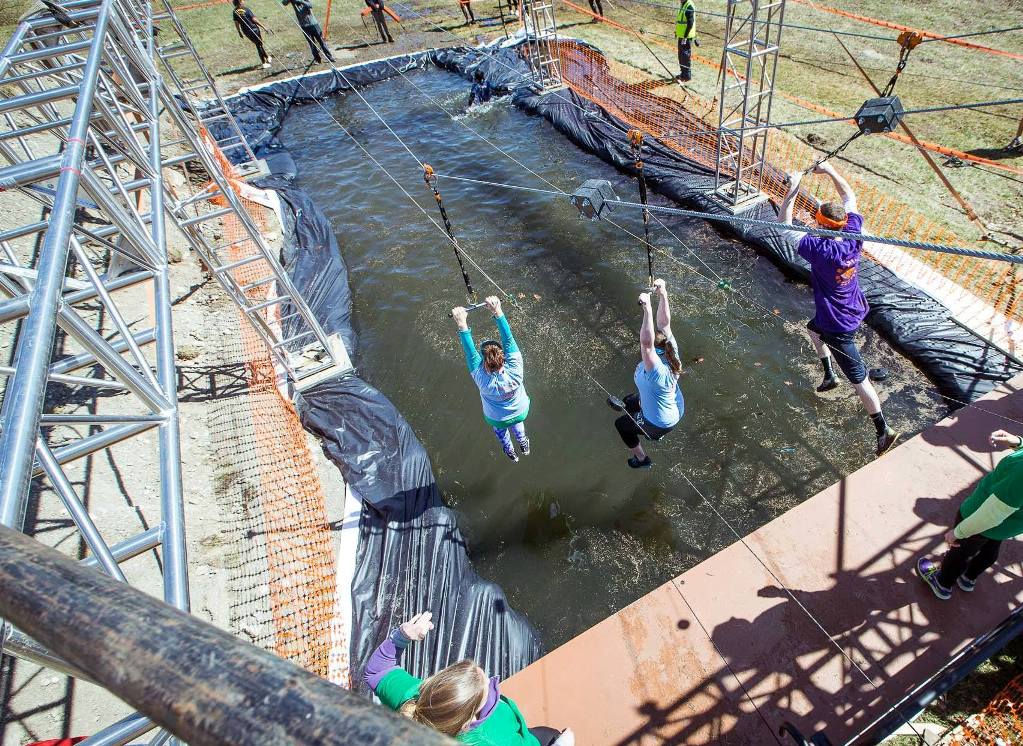 Each participant was given a T-shirt, complimentary beer ticket, snack bag and lunch voucher that could be used at one of the food stations that included brick over pizza, pulled pork, hot dogs, and veggie burgers. (Still no bling!) There was also a hose off area and a couple large changing area tents. The spacious venue had merchandise tents, a picnic area with fun lawn games and even a specially designed playground space with some mucky obstacles for the kids. Professional photographers were stationed throughout the course and would be offering free digital photos. 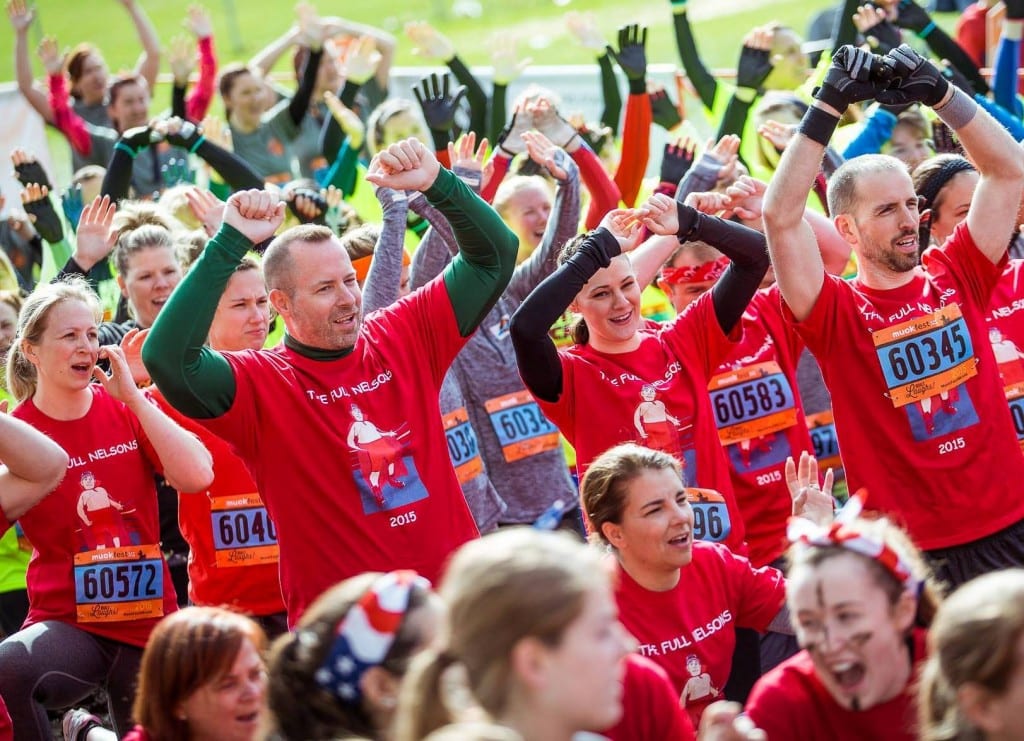 Muckfest once again provided an entertaining event that was enjoyed by most. The solidly built obstacles were well-designed and included some exciting new ones. They distinguish themselves from the pack with their many unique signature obstacles. When was the last time you ran an OCR that didn’t include a wall obstacle of some sort? Muckfest doesn’t have ANY and that’s one of the reasons I will continue coming back! The only negative was the extended wait times at some of the obstacles. If you're looking for a fun event that also supports a great cause, Muckfest is a great choice!

Have you done an MuckFest MS?

Leave your own MuckFest MS review and feedback...