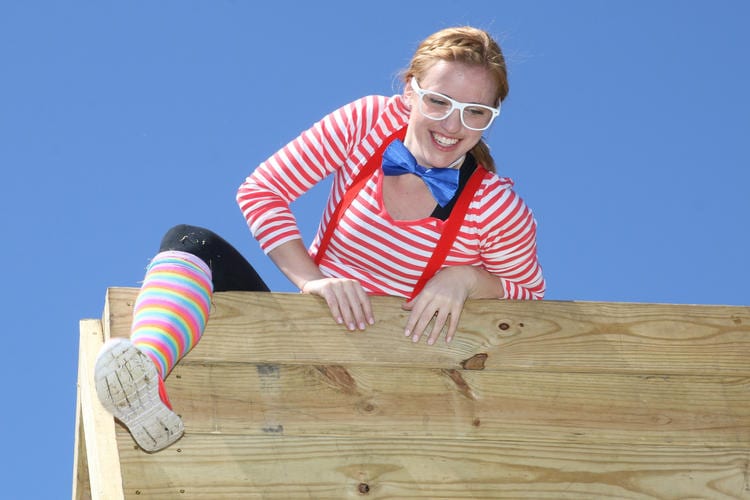 I woke up around 5:30am and was on the road around 6:15am. I made it to this Hartford time a little later than I wanted to, due to my GPS going rogue on me and taking me a little bit out of the way. I ended up missing the first wave and ended up going out with the second wave of the day. They had a decent turnout (over 400) so the waves were being sent out for a while.

The course started out with a very short sprint and came to the first obstacle which was a sandbag carry called “Carried away”. After this obstacle came the first “Wit” challenge of the day and I won’t lie, I didn’t really take the time to memorize the patterns and ran up the hill to complete the challenge. I was running solo while most were running as a team, so it was harder for me to have to memorize four different patterns by myself than being able to split the task with others. I ended up having the run back down the little hill and re-memorize the patterns before I ended up getting it right. After this was a very short sprint down the hill and came an obstacle that was a ladder climb up and then down a slanted wall with a rope, I decided to add a little twist to this and climbed up the slanted wall and down the ladder side and then back up the ladder and down the slanted wall.

After a sprint up the hill and then a minute or so on flatter ground, came the next obstacle which was three, four foot walls to hurdle/jump/climb over. At this point came another short sprint and the second mental challenge of the day “Scrambled” the object of this challenge was to create 3 words without moving the letters left or right and only up and down. It took a minute, but I was able to do this one, I also happened to catch two girls at this point so the three of us worked as a team. After a very brief sprint and came the obstacle “Shoot! and Ladder” which was a ladder wall climb. This was followed by another group of walls to deal with called “Walls on walls”. The next obstacle was another mental challenge called “Cinderbloku” which was a three cinder-blocks with dominoes written on each one and you have to have them total 1 to 6 both vertical and diagonal. This was a fun challenge and I seem to get it pretty fast! After another brief sprint came another mental challenge called “Tire Towers” which was three poles with one have three tires numbed 1, 2, and 3. The object of this challenge was to get the tires in the order of 1, 2, and 3 without ever having a lower number above a higher number. 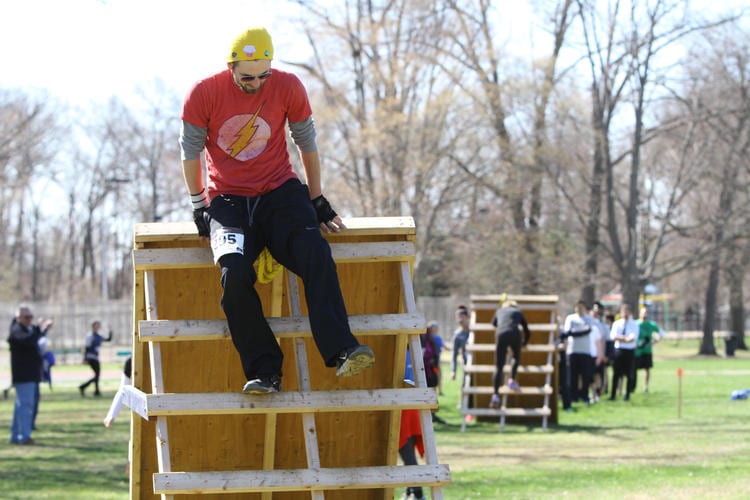 The next obstacle was another mental challenge called “Snake Eyes” which the object was to roll two big dice and then take the numbers provided and total each dice within two hula-hoops that were laid over each other to have 3 spots. Any of the stone blocks with a number placed on the middle was used for both dice and then you had to place stone numbers into to the other two spots to total each dice role exactly. This one was confusing as you didn’t actually have to use all the stones provided, but I was able to get it each time! Next up was “Returns of Rise Over Run” which was this time climbing up a slanted wall with the assistance of a rope for a total of four Rise Over Runs, I enjoyed this obstacle, but they only had one set and at this point I had caught other racers on each lap and had delays to complete them. A very short distance later was monkey bars (Gorilla Bars) and these were a nice challenge as they went up for a little bit and then curved back down. Up next was another mental challenge called “Stumped” which is a logic puzzle and I don’t want to say much more than that as once you knew the answer to this one it didn’t change, which rocked for laps two and three!

After this was a nice little sprint in the direct sunlight and racers then came to another mental challenge called “Ultimate Filed Sobriety Test”. The object of this obstacle was to balance on a wood beam and then with the assistance of a partner do a maze with two golf balls. This was fun, but also the only obstacle I saw someone injured on, one of the racers fell off the balance beam and injured her knee (I prayed she would be okay). Now came one of the longer (still not that long) sprints and then came a obstacle to climb over a bunch of tires stacked on each other called” “Mt Rubbermore”. Up next was a memory challenge called “Momento” where you had to flip tires and match two patterns on each tire. This wasn’t so bad and a good laugh! Right after this was a another mental challenge called “Bermuda” which you had to figure out the total amount of a specific shape, I don’t want to give this one away either, but it was funny, I tried this the first time with a group of other racers and they were counting each shape and I looked at it and a number just came into my head, I looked at the volunteer and told him my guess and he was shocked that I was correct (YAY)! This was also cool for laps two and three as the answer was always the same! Up next was “Tired” which was a big tire you had to flip if you failed “Bermuda” which I didn’t (lol)! Now was time for another short sprint and the last Tangram mental challenge of the course. This object was to roll a dice and get one of two shapes and you had to use stones to build that shape. I got both shapes between the three laps so got the chance to figure both options out. Now came the last obstacle of the course “It’s a 10” which was a ten foot wall. This was a challenging obstacle, but the only problem was they only had one wall and it caused at least five minutes delays two of my three laps. I actually climbed the left side which very few did, but I couldn't just run off and leave some of the racers, so I stayed each time and helped several over the wall. After this was fast sprint to the finish line! 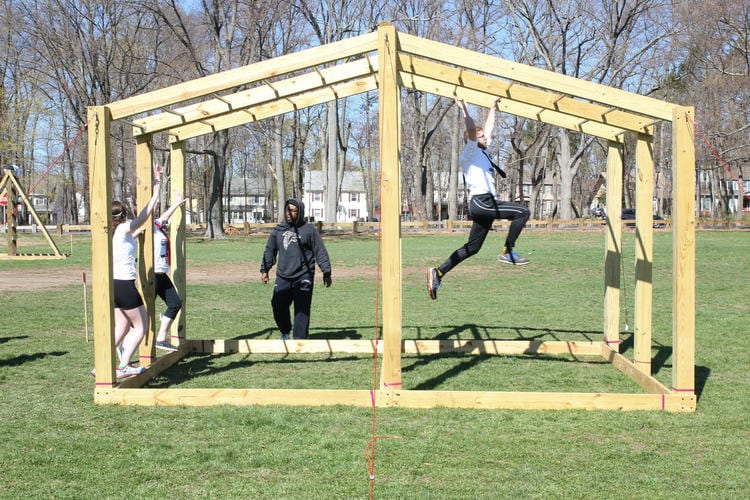 This was definitely a change for me with the mental challenges and added a change of pace to the course I have not experienced before. I also liked that only two of the eleven mental challenge obstacles were not repeatable and required me to figure them out each time on my extra laps. Other then maybe three obstacles the course ran smoothly without delays and if they just add a second lane of obstacles to those three the course would flow fast and minimal delays. The obstacles were also built well overall which is good to see for a newer OCR.

The schwag was a very nice finisher shirt and a pair of finisher sunglasses. I won't lie, I am a medal whore and love to get bling to the point I actually made and designed my own medal for this event (lol). I talked to James about this and he knows they need to step up the schwag game and will hopefully have a medal for the next event. Finishers (21 and older) also received a bear and had the choice of several beers (Half Full Brewery, Back East Brewing Company, Thomas Hooker Brewing Company, Two Roads Brewing Company, and City Steam Brewery) which was cool. Several of the sponsors gave out lots of product and a fair amount of the finishers went home with a case of Oohrah! Hydration water.

I am rating this event a 4.6 out of 5 stars, it was a good time and fun course with some really cool mental challenges and prototypical obstacles as well. They have room for improvement and I suspect they will do just that for the next event.

It was fun times and a new experience and I am happy I got to do it! I look forward to the next Grit ‘N Wit event.

Have you done Grit ‘N Wit? Share and Rate Your Own Experience…