This was my fifth trip to Canada in 2015 for an OCR race weekend and this one started out with more drama than the others. I arranged a place to stay via airbnb and arrived in Ottawa just after 8 pm on Friday night, but unfortunately the person I had to meet for the keys to the place was not available and explained via text messages he unavailable until 10 pm. After hours of waiting he was a no show and we ended up having to drive to the Spartan Ottawa venue parking lot around 1 am and all three of us slept in my Prius. An interesting beginning to the trip. 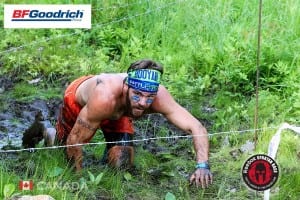 My friend Kelly (who traveled with me to Canada) made several observations about this event and the festival/spectator area. First, this event had a huge amount of children/kids that raced both on Saturday and Sunday on the kids course which looked awesome and even had its own version of the Platinum Rig!

The festival area had so many sponsors/booths giving both racers and spectators free products that it was easy to have food and drink all day (both days) for free. One of the companies that had a booth setup both days was Maple Leaf Natural Selections, which was giving out protein snacks called Protinis for free. When you combine the booths, younger kids with their family, racers, spectators, a good pre-race motivator/MC, and a good DJ playing a good playlist of music it made for a top notch festival area both days.

One additional note is the festival area had two water stations setup for spectators. They used the same huge blue water containers (2) used on the course for spectators to keep hydrated. The stations were definitely appreciated and something to look for at future Spartan Canada events.

This region of Spartan Canada (not a predominantly French speaking region) uses a different pre-race motivator/MC who was awesome and did a great job. He also has taken his job to a level none of the other Spartan (America and Canada) pre-race motivator/MC have and created his own custom made Spartan Warrior armor. At well over 6 feet in height and in good physical shape this makes for an awesome look. 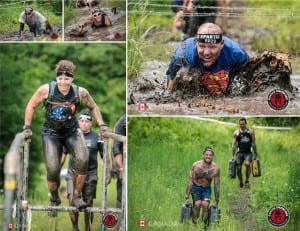 The course started out with a good inclined mountain trail run/climb and after some time came the first obstacle, which was a climb/jump over four foot hay bales. Just after the first hay bales was a net crawl, which I always dread as my hydration pack never fails to get caught up several times in these nets. Just after the net was another hay bale to jump/climb over and then the course continued on up the mountain and in the direct sunlight. The trail run continued on for a decent distance and eventually made its way to about a four foot log obstacle to climb/hop over.

Later came the hercules hoist and a much needed water station. After the water station, the course went back up the mountain and about half way up came to the next obstacle “Monkey Bars”, which at the Canadian Spartan’s is very different than the USA Spartan Monkey bars as they are on a much smaller version of bars and go a longer distance with a bell to ring at the end. After the monkey bars, the course for the first time made its way into the woods and out of the direct sunlight for a short trial run/climb up a stream bed that for the most part, was dried up and had no running water.

Once the course exited the woods and stream bed, it almost immediately came to the “Spearman” (spear throw) obstacle. The course then continued up the mountain for a brief trail sprint and came to the “Cargo Net” climb (yes the same cargo net I mentioned above), which is always a nice and easy challenge and a chance to catch my breath and sort of reset for the next trail climb up the mountain. After the net, the course continued up the mountain and up next came the “Atlas Carry”, which also happened to be exactly at the two mile point of the course. The Atlas carry wasn’t that bad this weekend as the course stayed dry and the ball wasn’t so hard to lift and carry the short distance. 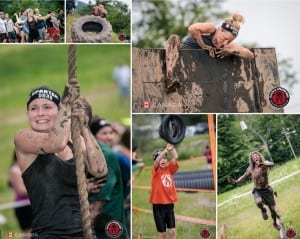 After the Atlas carry, the course turned and started to make its way back down the mountain for the second time and a short trail sprint later came to the next obstacle the “Camo Net Crawl”. The crawl also was in some heavy and think mud, so it was a challenge for me when you combined the crawl, mud, and dealing with my darn hydration back pack (lol). The course then continued on a short distance and came to the “Inverted Wall”, which being on a short distance after the crawl that covered most racers in a lot of mud made for a more of a challenging inverted wall. I learned early on this obstacle had hay on the ground, so I used some of the hay on each lap to clean my hands and the inverted wall off of the heavy mud. Just after the wall was the second water station and as already mentioned, water was needed on this course and I often took advantage of these water stations to re-fill my hydration often.

After the sandbag carry, the course continued down the mountain for a brief trail sprint and up next was the “Barbwire Crawl”, which was a nice muddy crawl and the barbed wire was placed lower than they had it at the Montreal Sprint (racers complained via Social Media, the barbed wire was too high up). The crawl started in very dirty, but low muddy water and then made its way to a thick mud that was on top of some larger and smaller rocks so racers really had to pay attention while crawling or they could easily smash/bruise both their legs and arms. The next obstacle was literally only a few hundred feet away and was an eight foot wall climb. I was able to help a lot of other racers throughout the weekend with getting up and over this wall, which always boosts my moral! 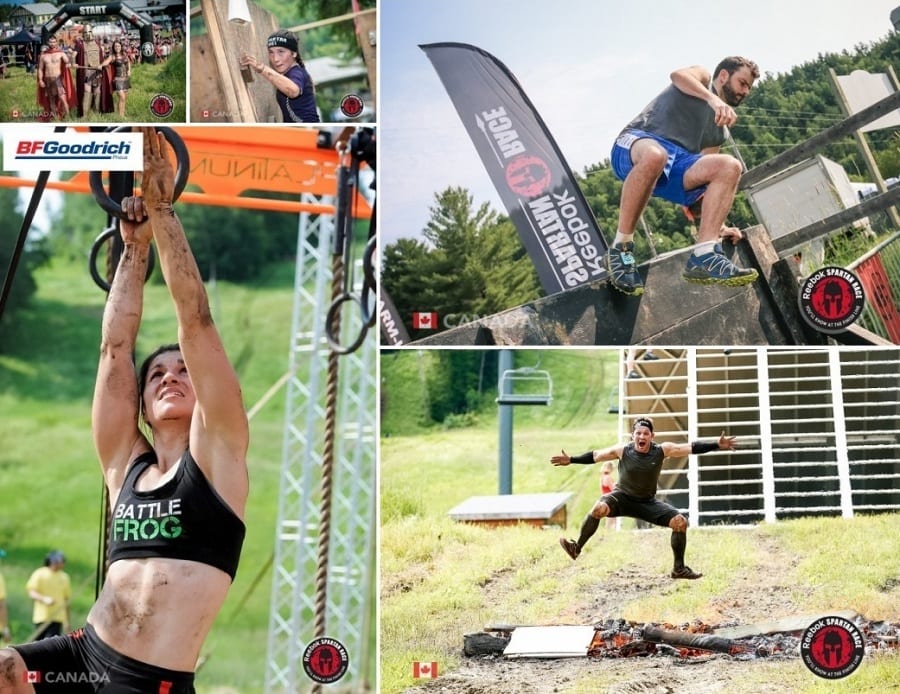 The course now continued back down the mountain and about halfway from the bottom came to the next obstacle, “Slack Balance Beam”, which is the typical Spartan Canada balance beam obstacle and starts out with a crossing on a wooden beam and then finisher with crossing a Slackline balance section and ringing a bell that I have to mention is pretty high up and makes this obstacle even more of a challenge. On this specific course, this obstacle was really difficult, because the balance beams where setup on the side of a mountain and not level at all and made it much harder. The course then continued down the remainder of the mountain and into the festival area and up next was the “Rope Climb”. In Canada, Spartan does not have this obstacle over a few feet of water, but rather uses hay to help cushion the fall for any racers that fall/slip off the rope. I am not sure why, but the ropes were covered in mud which made them more slippery than I expected they would be. Again, literally only maybe a few hundred feet away, was the next obstacle the “Platinum Rig” and with the decision to place this obstacle just after the rope climb, it made it even more of a challenge than it typically is. I hate to admit it, but the darn Platinum Rig has become my nemesis and I failed it all weekend and had to do the penalty.

Just after the slip wall was the last obstacle of the course, the “Fire Jump”, which depending on which lap I was on was sometimes a really high fire jump or sometimes a little lower. On my last lap on Sunday, they placed a bunch of cardboard boxes in the fire just before I arrived, so the flames were high on that lap. The course came to an end and racers were greeted by Spartan staff/volunteers dressed like the Spartan warriors (a very nice touch) and handed their hard earned finisher medals!

The newly designed medal for 2015 is a nice one and I am happy to add it to my medal collection. It’s also a nice touch Spartan went away from one generic finisher shirt and now have a unique shirt for each course/distance. Spartan Canada also uses a slightly different designed finisher shirt that is made out of a Dry-Fit type material and the medal has one minor difference compared to the USA Spartan medal, it does not include the year on the medal or a Trifecta pie piece.

Fun and challenging course, great festival area with lots of great free products to try, one of the best kids courses I have seen at any OCR, another top flight pre-race motivator/MC, and the typical great staff/group of volunteers I have come to expect makes for a rating of 4.9 out of 5 stars.

I have really come to look forward to my trips to Canada; Spartan Canada does an amazing job at all levels from the best registration system in the business, to good courses, and a great staff and team of volunteers. I look forward to my other planned trips this year to more Spartan races.

Have you done a Spartan Race in Canada? Share and Rate Your Experience…