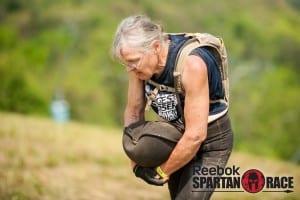 The Pennsylvania Spartan weekend has been one of the most anticipated Spartan race weekends of the year for me as last year’s Pennsylvania Sprint course was my favorite Spartan course I did all year. I also was super excited that Spartan was stepping it up this year and offering a Super at the same venue and I had high expectations for both the Super and Sprint to be good races.

The Super version of the course was just over 8 miles and took racers completely up and down the mount two full times and about half way up a third time. Both the Super and Sprint started from the same starting line and both began with the same run/walk up the mountain and at about a quarter of a mile into the course, both versions came to the first obstacle “Log Hurdles”, which was a nice and easy challenge to start with unless you are a really short racer. The course continued on and into some very deep and technical woods for almost a half of a mile in distance before it exited the deep woods and came to the next obstacle “Vertical Cargo”, this obstacle was also used for both versions of the course. The course continued straight up the mountain and eventually went back into the tree line and more technical trails that requires racers to really watch where they were going/stepping. The course continued for a little over a half of mile and up next was the obstacle “Cliff Climb” (Super and Sprint) and then a short trail distance up the mountain was a water station and then just after the water was the next obstacle “Herc Hoist” (Super and Sprint), which was way less of a challenge than just a few weeks prior at the Boston Super (the bags were saturated with rain water and mega heavy at the Boston event), which made for a nice and easy obstacle now at the top of the mountain. 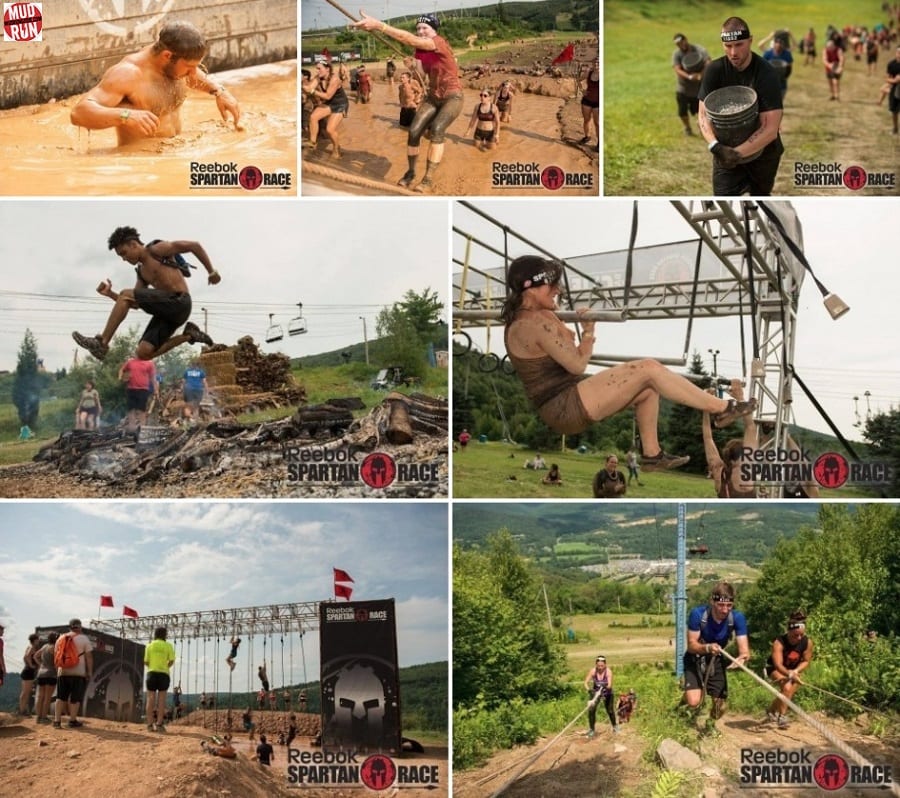 The next obstacle was the sandbag carry (Super and Sprint), which went down a steep trail on the mountain for a fairly long distance and then back up the mountain for again a long distance that was on a steep incline and really hit a lot of racers hard and slowed us down for the entire climb back up. This obstacle was on both the Super and Sprint versions of the course and I have to say it was way more brutal on Sunday after completing 3 OCR’s already on the race weekend and I had to stop a few times to rest on the climb up the mountain. On Saturday, I actually went more than half way back down the mountain and carried a friend’s sandbag up as well. A short distance after the sandbag carry was the “Spear Throw”. I noticed it looks like they have moved the hay bale targets a little further away, but not lengthened the strings attached to them and this looked to me to be causing some to have bad throws. I am happy I made this observation, as I adjusted my arch on the spears both days and was able to hit the target three times (I showed a group of racers the technique I use and did an extra spear toss on Saturday).

To this point, the course was the same for both the Super and Sprint, but this is where that changed for the Super on Saturday. The Super version of the course continued on the top of the mountain for a brief trail sprint before coming to the next obstacle, which was a classified obstacle on the map and I hate to say it, I cannot remember what it was. The course now continued back down the mountain and the next obstacle was “Stairway to Sparta” which is another ladder wall type obstacle, but with this one the first part of the obstacle is solid sections of very slanted wood that provides nowhere to grab on to and climb up, so it requires good upper body strength to get up the first part of the obstacles climb. From here the course went for one of the longer trail portions of the course that pretty much went through very technical trail descents that required racers to pay attention to the terrain and have patience to get through it. The next obstacle was the “Atlas Carry” and it was interesting to watch racers that just finished the above mentioned technical descents deal with the heavy Atlas stones. The course now continued on for a decent distance trail sprint and the next obstacle I recall was the “Farmers Log Carry”, which was two logs chained together that had to be carried for a short distance and then back. The course again continued for a brief distance and I am sorry to say I cannot remember what the next obstacle was but the next obstacle after that was a set of walls that were 7 feet high and then an 8 foot wall. This was almost the halfway point of the course, and you could see the course, obstacles, and the hot sun were taking its toll out on most racers. 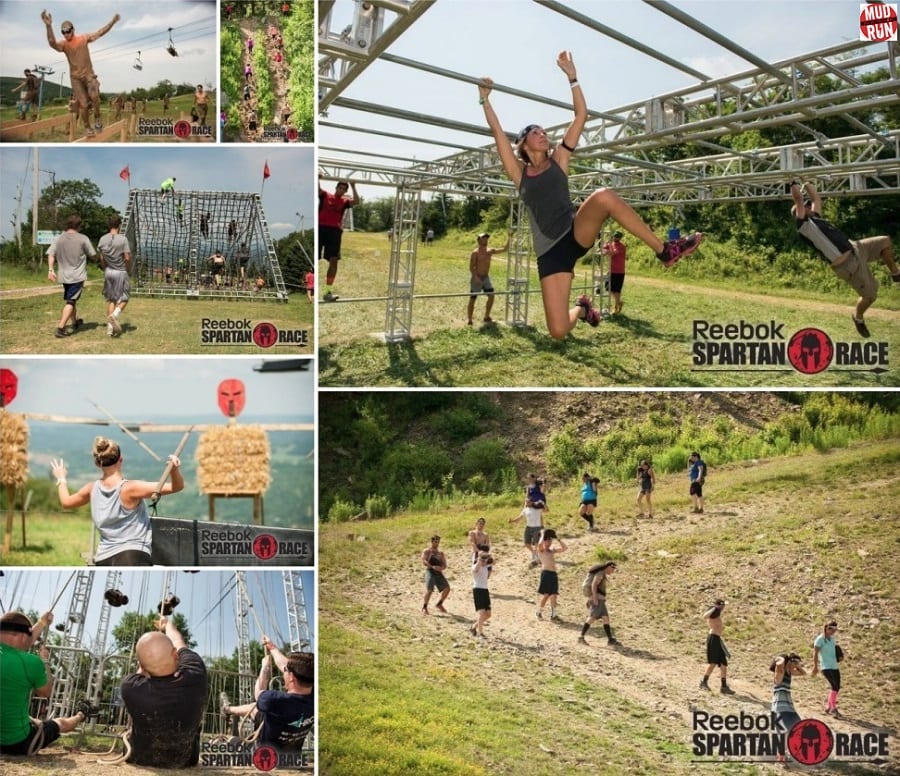 The course started to go back up the mountain and then back down and almost exactly a half of mile later was another classified obstacle and then the course made its way for over a half of mile more distance almost back to the top of the mountain and it was time for nice and easy “4 foot Over Walls”. A short sprint distance later was the next obstacle the “Log Carry”, which was a very challenging obstacle but dangerous as well. Some of the logs were short and thick and I chose to carry one of those down the mountain, I was feeling pretty good so I was trying to jog down the mountain and ended up tripping and falling to the ground and the log went rolling down the mountain and gaining speed the entire time I could see it. The log literally continued on until it was out of my field of vision and I later found out from my friend Raymond that he saw it eventually hit a tree and come to a stop. This could be, and from what I had heard was, a dangerous obstacle all day with several injuries. The continuation of the course was both Sprint and Super from this point and continued on back down the mountain. One of the next obstacles on the course was almost a mile down the trail and it was “Rolling Mud” and then a brief sprint later was the next obstacle “Tyrolean Traverse” which was the typical version of this obstacle that I have Spartan using this year. The obstacle on both versions of the course comes later into the race, so at this point most racers are tired and this traverse is a good challenge. The course went for a curve back into the woods for just a short distance and then back out and came to the next obstacle, the “Swim”, which was a very fun and challenging obstacle. I noticed on Saturday for the Super only one other racers opted to swim in the deep section of the water, while all the other racers (at least while I was in this section) chose to play it safe and stay in the shallower water and walk across rather than swim. 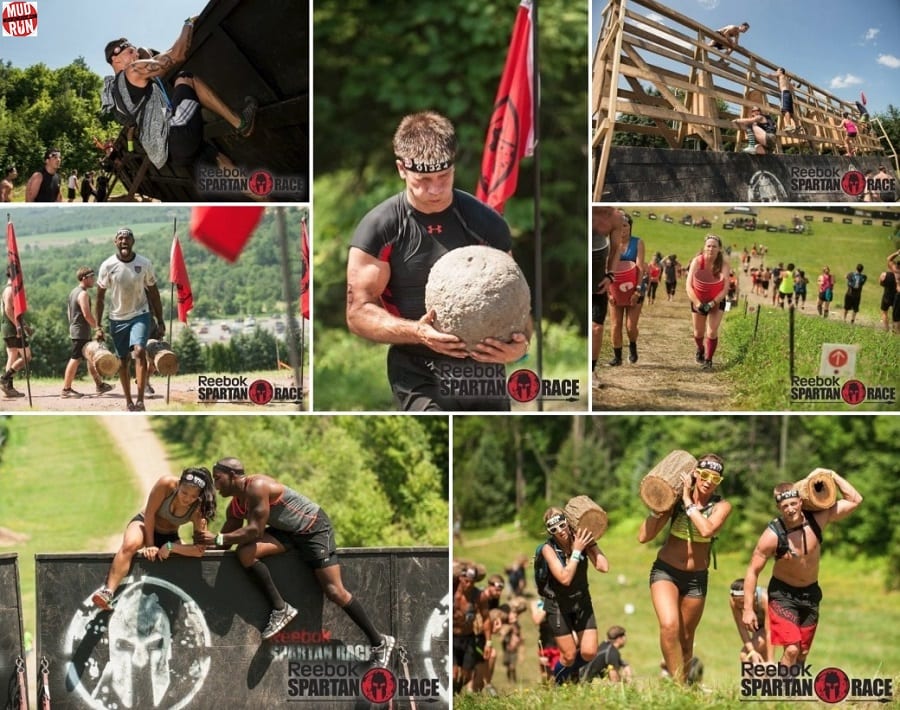 The course continued on after the swim and one of the next obstacles up was the good old “Bucket Brigade”, which went down a nice steep mountain and then back up and much like the sandbag carry this obstacle beats most of us racers down and takes some time with rest to get done. After conquering the bucket it was a short distance to the rope climb, which had ropes with and without knots in them. The course then continued down the mountain a short distance it was now time for one of the hardest obstacles on the course, a long barbed wire crawl down the mountain in a terrain that was rocky and the barbed wire was hung very low, once down the crawl it was time for the “Slip Wall” obstacle, which is always a nice and easy challenge and one I was happy to do just to take a break from the barbed wire crawl. Just after the slip wall, the course turned back up the mountain and it was time for barbed wire crawl # 2. This part of the crawl is where racers seemed to bonk and slow down which caused crawling lines and made this even more of a challenge. After the barbed wire, the course went a short way up the mountain and then came to the “Log Hop” obstacle which was harder than I expected on Saturday after just less than 8 miles being completed at this point. The course a very short distance later came to the “Clif Multi-Rig” and this one is always a hard one for my surgically repaired shoulders. The course started back down the mountain and it came shortly to the “Dunk Wall” and then after that was a very short spirit down the hill and it was time for the last obstacle of the course, the fire jump and then the finish line!

Super: This was the best Spartan Super, I have done to date (NJ, SC, and MA), which I expected it to be and really hope they add a Beast to this venue for next year.

Sprint: The sprint was very challenging and one of the harder and more enjoyable ones I have done, but I thought last year’s Sprint at the same venue was just a little harder.

The newly designed medals for 2015 are sexy and I am happy to add them to my medal collection. It’s also a nice touch Spartan went away from one generic finisher shirt and now has a unique shirt for each course/distance.

I am rating the weekend a 4.9 out of 5 stars. The reason for a deduction is they ran out or were low on water at most of the water stations on Saturday during the Super.

Time and time again, this venue lives up to being one of the best Spartan races in the country and I look forward to going back next year.

What Spartan Races have you done this year? Share and Rate your own experience with us…