The course was setup at a venue that is used for the county fair for many years and it’s a very flat course, but the scorching hot sun and heat made up for the lack of hills on this course. 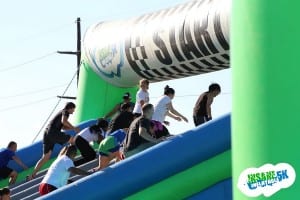 The first obstacle was right at the start line and was fittingly called “Let's Go”. This was a nice and fun climb up an inflatable obstacle and then a fun bouncy slide down. The course continued on for a short distance and if I recall the next obstacle was “Mattress Run”, which is much like the tire obstacles I have seen on many OCR courses, but with this one racers where trying to step in each hole on a very long and bouncy inflatable that resembled a mattress with lots of angled holes. After a brief sprint was “Big Balls”, which was a lot of inflated big balls that were placed in an inflated structure and racers had to avoid, ram, or be rammed by the big balls to get to the other side and complete the obstacle. The course continued on for a brief sprint and up next I think was “Levels”, which was an inflatable with different levels of blocks to jump/climb/crawl up and down; the hard part about this obstacle was trying to get up and down each block while not losing balance on each section. The fun part is, if you lose your balance on this or any of the obstacles, you do a face/rear-end plant on to a nice and cushy surface. 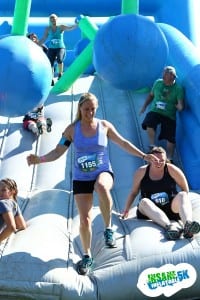 he course continued on and up next was “Tangled Up” which had many inflated obstructions and you had to pick a path and go over, under, thru, and around each section. This was one of those types of obstacles were my forcefully trying to ram through some sections caused other racers to get bopped by the inflated obstructions, so I tried to be very aware of my surroundings to not mess with the other racers in the obstacle with me.  The course then came to “Wrecking Balls” which was a long inflatable (110 feet long) obstacle with many large inflated balls hanging down and in the obstruction of runners, and also had a few other inflated obstructions between the large hanging balls. This was another obstacle that I had to be careful not to ram the balls as hard as I wanted or I would cause the balls to go smashing into other unsuspecting racers and knock them down.  The course went up a very slight incline part of the course and came to the next obstacle “Bumpin' Bumpin'” which was a rope climb up two and a half stories high and then a fun slide down, followed by a bouncy section. I chose to slide down on my stomach on this one and came crashing down face first in the final bouncy section, which was all fun and laughs for me. A short sprint later was the next obstacle was “Pure Misery”, which was not only a high in the air inflatable, but also was a long obstacle that started with one rope climb and then a slide down and then a series of inflated tipsy tower obstructions followed by another rope climb and one last slide down and off the obstacle! After another short sprint, it was time for “S.O.S.”, which was also a two and a half stories high inflatable obstacle that resembles the (now retired) NASA space shuttle and required racers to climb up and then slide down. 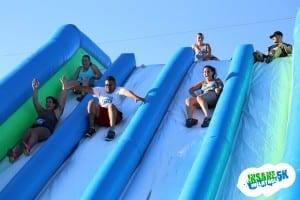 The course looped around some permanent structures on the venue and then went down a very short decline and made its way to the next obstacle “Jump Around”, which was an awesome and fun bounce up the obstacle and then back down. I enjoyed this obstacle the most, because as I started the down section of it, no one else was on the obstacle with me and I was able to do a flip and land on my rear-end and the literally bounce back onto my feet and keep on going without skipping a beat! This was good times and all smiles for me. The course went on for a short sprint more and then turned back to the festival area and it was time for the last obstacle, which started with several large hanging balls (everyone loves large hanging balls) and then some tipsy tower obstructions followed a tall rope ladder climb and finished with a fun slide down (on my stomach again) to the finish. 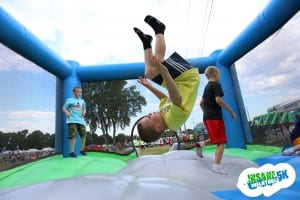 I have said this before and will say it again, not all obstacle course races have to be hard and/or have a great deal of difficult obstacles to be successful in this business. Insane Inflatable is a great example of a course and event that has made its own niche in this business and they had an amazing turnout in an area that typically does not put on a lot of obstacle course type of events. I noticed a few dozen groups of racers that had custom shirts made just for this event and I couldn't help but think how cool that was and how good it is for the future of obstacle courses.

The schwag included a cute and stylish finisher medal that has an inflatable obstacle on it, a nice looking finisher shirt, and a little flat waterproof storage device to be able to secure things like ID's and credit cards in it while racing.

It’s important that when it comes to an event like this, my readers understand I rate it based on a different perspective than I would a Spartan or BattleFrog event/race. The bottom line: registration was fast and smooth the course was fun and challenging (all be it only eleven obstacles) for both first time obstacle course racers of all ages, and even more experienced racers who attended this event with a full understanding and expectation it wasn't going to be a “Spartan” or “Tough Mudder” type course. The volunteers were awesome, which came to no shock to me, and the schwag was nice. For the most part all the obstacles moved fast and had very little delays (at least while I was at them). The course had, if I recall, two water stations and this would be the only area I would suggest to improve and add one more water station; especially on such a massively hot day as this day was. I am rating the course a 5 out of 5 stars.

I work for a very large company in the Hudson Valley area and today at work I saw at least a half dozen people rocking the Insane Inflatable finisher shirt, which I have to say was a first and really brought a smile to my face.

I am happy I ended up running the course and going to this event as I really love to provide a recap of all obstacle course races and not just the bigger named or harder challenging ones. Insane Inflatable is a great obstacle course to take a first timer to and introduce them to the world of obstacle courses in a fun and not to intimidating course.