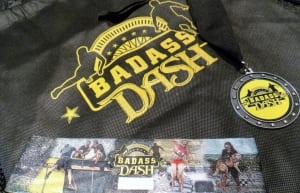 This BADASS Dash was held at the ROC (Recreational Outdoor Campus) located at 26749 Civic Centre Road in Georgina, Ontario.  It was easy to navigate to and was directly north of Toronto on Hwy 404 until it ended at the lake.  Garmin found the location easily and traffic was quite good considering it was a long weekend.  There was good some signage once you approached the venue that clearly directed you into the grounds. 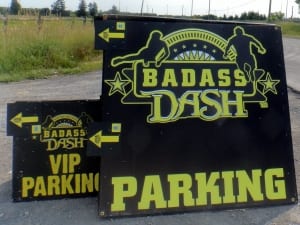 Leading up to the race, the organizers kept racers properly informed through emails and Facebook updates. As you entered the park you were greeted by a friendly volunteer who directed us to our parking spot.  Parking was $10.00 per vehicle and there was plenty of it, close to the main registration/race kit pick-up tent.  The lot was paved and accessible to come and go easily. For registration, there were no lineups at race kit pick up and you received your timing chip once you submitted your completed waiver. Bag check was available on-site free of charge, however, vehicles were close enough, as mentioned previously to come and go to if you did not want to check an item. As for “facilities”, there was a port-o-let on-site near the main venue area and it appeared to have main building access for additional facilities and change areas… We chose to change at our vehicle instead. 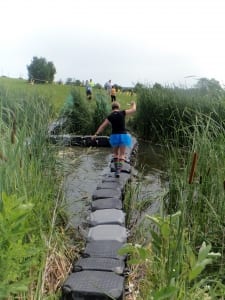 pectators are free and can sit along the course and watch the event.  We arrived early and tried to jump into the 11:00 heat but there was some confusion as to how to get to the main starting line, so we ended up joining the 11:20 heat.  There were only about 10 people in our heat and the crowd was quite small, a bit disappointing but again, it was a long weekend and that may have deterred many from making the trek north.

The MC kept everyone engaged and sent us off on time.  We headed out across the fields and began a series of activities that looped us out and around the campus while performing, sit ups, push ups, lunges, carries, climbs and hurdles.  We were a bit disappointed that there were not more sizeable structures, but we had a first time racer with us, so it was a good experience for them with little to no crowds or stress as they learned the ropes of racing.

Some of the more creative obstacles included the lily pad crossing, transport truck cargo climb, spider web shower and cargo net on hill water crawl.  Other obstacles that became somewhat repetitious were the hurdles and weaving around the mountain bike course with small hills to run up and down.

The K9 course seemed popular and drew a new crowd to this type of venue and the racing kids seemed to really enjoy the energy of having the animals around while racing to the finish line. 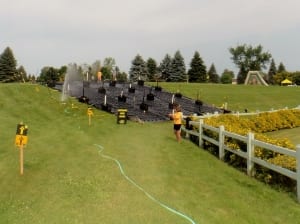 ot as motivating as they have been in the past, some appeared a bit disinterested to be there.  Most obstacles had a volunteer to monitor it and the one roped wall climb had the best volunteers –they were friendly, supportive and had an excellent sense of humour!  Another obstacle to mention was the sand pit crawl, it was long, and grueling and really was great. The volunteers there were hilarious and kept us laughing throughout! Well done!

Sadly, the final slide down the hill was not slippery and we ended up rolling or running down the bottom portion….a bit uneventful for the last big hurrah, and the announcer was distracted at the time so we did not get any fanfare as we crossed the finish line.

The merchandise table was easily located but it was disappointing to only get the backpack and headband for this event, no tee shirt unless you bought a cotton one. And the medal was the same this year as previous years, not good for those of us returning for some new bling!

Medics were on-site and their tent was clearly marked.

Prizes were awarded to the top Elite racers.

Bring back the bouncy castle slide and why wasn’t the bouncy house used at this event?  Reduce the number of repetitive items, 10-15 rows of things gets a bit tedious.

Perhaps reduce the number of obstacles but make them more challenging and less ‘home made’.  Change the medal (even slightly) be it the colour of the lanyard or the style of the medal.

Continue with the K9 version as it appeared to be very popular again this year.

Offer the option of a tee shirt online prior to the event so that you don’t have to carry cash to the merch area.

Modify the access to the start line so that racers do not have to cross in front of the start/finish line, was a bit confusing.

Do not have the racers run through the parking lot as the parked cars along the pathway were blocking the flags and also racers could be tempted to muck about with the vehicles along the route.  We also had to watch for cars coming and going across our path.

Thanks again to Brett & Brian for taking the time to plan and coordinate these events and supporting the OCR community at a variety of locations.   Know that your hard work is appreciated!