While obstacle course racing is becoming more mainstream, the obsessive racers that participate multiple times a month are still on the fringes of society.  CNBC even had it listed as an extreme sport on their recent program highlighting obstacle course racing.  A smaller group, albeit still pretty large, are the Legionnaires.  Legionnaires are members of the Tough Mudder (TM) community that have completed more than one event.  Although they do not have a separate name, there is a smaller subset of athletes that I call the Multi-Lap Legionnaires.

However, every TM weekend without fanfare and without special recognition, these Multi-Lap Legionnaires go out to TM events and complete distances that are incomprehensible to the average gym rat and even to many obstacle racers.  The multi-lappers are out there all day on Saturday doing 2, 3 or 4 laps of the course.  With each lap usually covering over 10 or more miles, that is a marathon or ultra-marathon length accomplishment, plus obstacles.

“SpideyBait” Melissa Dugan and Andrew Ekberg during part of a 40+ mile weekend.

This ultra accomplishment is made more impressive by the 2nd day of TM events.  While most athletes would be resting after such a long run, these athletes are back on the start line the following day….smiling…for another lap…or two.  Even more impressive is that the faces that are doing this tend to be the same people regardless of the location of the race.  Multi-Lap Legionnaire veterans like Eric Jenkins, typically seen wearing an Under Armour Batman compression shirt, and Joe Perry, typically seen covered in face paint, are sitting at over 80 TM finishes.  Both of them are closing in on their 100th TM by the end of 2015.  Other athletes like JP Pools is an advocate of counting miles completing his 500th mile of Tough Mudder at the recent Tough Mudder Long Island.  This is not just a male dominated group either, with female athletes like Devon Musko, who has over 50 TM finishes.

Towards the front of the pack are usually World Toughest Mudder Veterans like Jordan Smith (who ran 44 miles in Saturday in TM Kentucky and another 11 Sunday) and 10th place WTM finisher, silver bib wearing Joel Forsyth.  Some are veterans and some are preparing for World’s Toughest Mudder but not all of them.  It is Mudders like these and motivated athletes like Jim Campbell, the mastermind behind the 25+ and 50+ headbands, that are pushing athletes to attend more events and to go further each weekend. 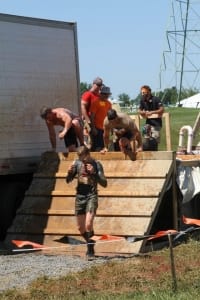 Most of them are season pass holders allowing one large purchase to fuel their obsessive nature.  However, not all of them are season pass holders and you will typically see those athletes volunteering at the events whether it is at the top of Everest 2.0 pulling athletes to the top or encouraging participants at King of Swingers to overcome their fears.

Parts of the OCR community look down on TM because of their lack of competitive wave.  I personally like competitive waves and would love to see them come back at TM.  Just because there is a lack of competitive timing at these events, do not be fooled into thinking that there are not incredible athletes out there every weekend covering distances that seem impossible to the average person. 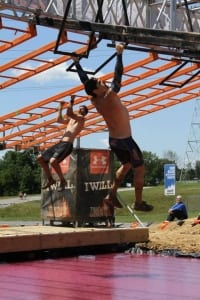 This eclectic group of athletes welcomes new faces, as I found out by accident and has a sense of community that is hard to find at other races.  With a weird obsession for pop-tarts and bacon, they definitely provide a unique flavor to the OCR world.  This flavor is built upon teamwork, camaraderie and having a good time while covering ultra-distances.  Whether you are running with the shark obsessed Melissa “Sharkbait” Dugan, Spiderman dressed Andrew Ekberg, the other Batman compression shirt wearing John Howard or one of the three Captain Americas (Andrew Blakley, Chad Macek or Aaron Krebs) there is always room for whatever exceptional aspect you bring to TM.  If you are looking for good training, and a friendly group of athletes, head out to the first wave of a TM and join the Multi-Lap Legionnaires on their ultra journey.  If you like what you experience, then make sure you show up the following day for another lap…or two.

All other pictures provided by Amy Perperis of Strength & Speed

0shares
Disclaimer: The viewpoints expressed by the authors do not necessarily reflect the opinions, viewpoints and official policies of Mud Run Guide LLC, or their staff. The comments posted on this Website are solely the opinions of the posters.
By Evan Perperis|2015-12-04T14:46:29-05:00September 3rd, 2015|Op-Ed|0 Comments