I am always open to try new things and love an adventure.  Last weekend we were pleasantly surprised by a new event that just launched in our own neck of the woods; it was a great short drive to the race site and there was an element of intrigue as we were only given snippets of information prior to race day.

GPS coordinates were given to us a few days ahead of the race and we scoped it out the night before on Google Maps so we could calculate our departure time in the morning.  The race location in Glenburnie, Ontario was generously offered for use by the MTB (Mountain Bike) Kingston Club, a local group that maintains and hosts races at their lakeside site.  It has some great elements of single and double track trails that weave through wooded areas overlooking beautiful Collins Lake.

For this adventure we were told to bring a whistle, a mountain bike, 4 litres of water, a CSA approved helmet and we could bring our own personal floatation device but it was not mandatory.  The race provided the choice of stand up paddle boards or kayaks for a portion of each lap. 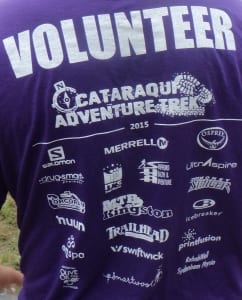 Registration was easy and online and confirmations were received quickly. Race kit pick-up was available the day of the event only and there were no lineups and our bibs and shirts were located quickly and easily.

This was a very family-friendly event, that had the race directors friends and relatives “volunteering” throughout the day and they could be seen directing traffic, cheering on racers and moving between photography and accounting for the racers as they looped past various points.

The race itself was an adventure themed race where participants were given directions at the start to head into the fields and gather 3 objects and then run back to the starting area where they dropped off the items to help disperse the pack before then being directed off into the first segment of the wooded trail run.  The first loop consisted of a 2.1KM single trail dirt path that weaved its way through the woods and came out onto a steep cliff edge overlooking the lakefront. This was my favourite part of the running segment….winding my way down towards the waterfront navigating through twisted roots, rocks and steep sloping terrain.  Beautiful!

Once down at the waterfront; volunteers, who were pleasant and keep you motivated, helped launch you from the dock toward 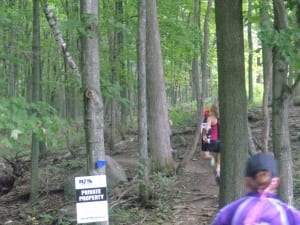 s the 800Meter out and back kayak paddle on the glass-like surface of Collins Lake. This section of the lake is beautiful, clear, and quite private and allowed racers to perfect their skills in a safe setting as they raced out towards the centre of the lake and around the buoys and returned under the watchful eye of the ‘water rescue team’ located nearby.

Once back to shore, racers headed up a slight embankment towards the transition zone where the Queen’s University Female Rugby Team had constructed solid bike racks and fencing to keep equipment safe and encourage a race ‘flow’ as racers transitioned to bicycle and headed west into the single and double track trails for approximately 6 KM.  The bike course was clearly marked and those less experienced, myself included, had the option to choose either a black or green trail based on our level of experience.  I was amazed at how awesome these trails were as they looped back and forth for what seemed like an eternity as you dodged trees, rocks and branches while navigating the signage along the course.  Near the end, you headed down a two lane pathway and I regained motivation as racers sped towards me and I knew that I was nearing some kind of a loop to return back to base camp; not before going through a brutally rough cleared field.

Once we cleared the field and headed back towards the main trails, Once out of the woods you race into the transition zone again to ‘high five’ your relay partner who then heads off for their 3 segment lap.  This is repeated over a 4 hour period and each lap must be completed in full to count. Solo racers also had the opportunity to tackle this course by doing consecutive laps. 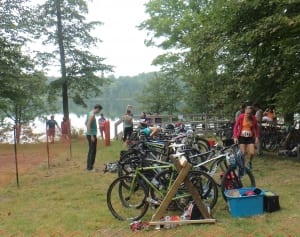 Going into this event we had decided that we would try it out for fun, enter a few relay teams to reduce the number of laps we had to do and also see what the adventure racing world is all about.  It was exciting to see some of the elite racers as they headed out multiple times –the winner completing 6 laps and making it look easy.  We celebrated small victories; one or two successful laps each, no major injuries, first times in kayaks etc….and trying something completely different on a beautiful Sunday morning.

The course was well marked and had some elements of decision, if you went the wrong way, turn back signs were clearly marked to re-route you around to another branch of the trail. 2 photographers took photos that were then made available to racers online free of charge.  A medic tent was at the main base camp but injuries were limited to scrapes and bruises as racers charged through the woods to complete their laps.

The finish line was well positioned so spectators could cheer on their friends and family; they also provided a tented area for shade for racers throughout the day.  Timing chips were located in racers bibs and announcers updated participants on the remaining time so they could estimate the number of laps they could complete.

Good from start to finish, keeping us informed, updated and curious as to the how the adventure would unfold throughout the day.  Email and Facebook were accurate and current. 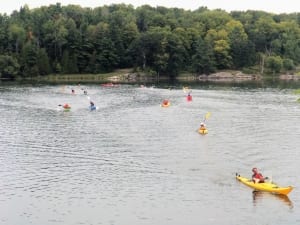 Many racers complained about the field segment of the course.  Perhaps add more to the run segment or paddle portion and omit that field segment next year?  I must admit it deterred me from doing a second lap as the jarring on a strange bicycle (I borrowed for the event) made it super uncomfortable and I was not going to do it again! As an OCR enthusiast we would have loved obstacles in that field so that we could dismount, climb some stuff, and get back on the bike to head towards the finish line…although I digress.

As a “medal addict”, I would have loved to see some cool ‘bling’ for the event, but I realize that cost has a lot to do with it and the tech shirts and socks were a nice touch.

Music…oddly enough, I couldn’t recall if there was music at this event, I did remember there being an M/C announcing laps, names and cheering us on, but not any music?  But then I remembered as we were standing at the transition zone, we commented on how great the tunes were to keep us motivated before heading back out.

Prizes were awarded for the following:

This year’s winner was James Galipeau (http://teamcanadaar.blogspot.ca/) from Gatineau completing 6 laps. The second and third male also completed 6 laps however came in about 6-7 minutes after the clock ended so those laps did not count.

There was also a bib draw for door prizes at the end of the day, a fun way to thank the participants with the opportunity of a parting gift.

We enjoyed this event and met some great people.  The location was ‘spot on’ and it flowed easily through the various activities. For a first time event, I think it was excellent.  Started on time, was well executed and no confusion as to the rules, flow, pace and activities throughout the day.  It was a relaxing environment and felt comfortable while racers waited for their partners return.  Transition zones were well laid out and not chaotic compared to some tri events we have attended.

I spoke to the one of the Race Directors shortly after the event and plans are already in the making for next year’s race.  She conveyed the following “…due to the secret nature of the location and course, we can't share too much; but, rest assured we have already begun planning…count on a similar format, possibly a longer option and maybe something for the kids.”

And her closing remarks were “Our main goal with this race was to introduce new athletes to Adventure Racing. While we were not a “true” adventure race (Adventure Racing {AR} is typically a team race and involves navigation) we felt that by taking the race into the woods, and the distance and time we covered, we introduced racers to adventure racing. Our racers were a great mix of first time ever racers, to distance runners, to tri-athletes, to obstacle racers, and a few “seasoned veterans” of AR. To get such a great mix of different racers into one race was simply amazing for us. And to have a course that seemed to challenge all of these racers in some way was the icing on the cake. We are so thankful not only to those who raced with us, but to our families, friends and sponsors that came together to help us pull this together. We look forward to many more years of the Cataraqui Adventure Trek!”

As passionate OCRs, we have to agree; it gave us a good ‘feel’ for AR and we have added it to our ‘activity’ calendar for 2016, eager to see what adventure awaits us.

Thank you to the volunteers, and Race Directors: Michelle McShane and Tammie Stanton for putting on a great event from start to finish and bringing it close to home.