Spartan Race World Championship was held on Saturday, October 3 Squaw Valley Ski Resort in Olympic Valley, CA. One of the largest ski areas in the United States, and the host site of the entire 1960 Winter Olympics. The race brought athletes in from all over the world, in total about 20 countries were in attendance. Check out our Spartan Race World Championships Coverage page for results, course map, predictions, & more.

Lake Tahoe: Beauty and the Beast

With the move to Lake Tahoe, athletes were presented a new set of challenges; the biggest challenge being the attitude – a factor which affected many of the elites.

The first seven miles of the course were a climb up to the peak of Squaw Valley, and it was immediately clear that experienced mountain runners would have an advantage. Robert Killian quickly surged into the lead on the men's side, a position he would not relinquish for the remainder of the day.

After the brutal ascent, the course took a 180º turn and for the remaining 7 miles, racers bombed down an occasionally steep downhill track. The 50/50 “balance” of ascent and descent had many dubbing the course 7 up and 7 down, with nearly as many complaining about the difficulty of the downhill sections as those who lamented the climbing.

The terrain wasn't the only challenge thousands of racers faced in Tahoe on Saturday, there were plenty of burpee-making Spartan Race obstacles as well. The Monkey Bars played a huge role in decimating the women's field extremely early; within the first mile almost the entire womens field were forced to perform burpees as Rose Wetzel-Sinnett successfully completed them and enjoyed an early lead. Many of the men were clogged on the monkey bars as well, with an especially big snarl after two dozen guys made their way through:

Carnage at the monkey bars. Lots of people doing burpees. The three, wide lanes were packed with people going three wide in each lane. I give the guy in front of me time to get about half way and then I start. I quickly catch up to him and he stops with two bars to go! I hook an elbow and say some, well, words of “encouragement.” He finally gets out of the way (forget if he fell or made it) and I go for the next bar, which is about 10 inches higher than the bar I'm hooked on.

I land smack on the ground on my upper back and neck.

My wife Sara said I laid there for “awhile,” but I only remember jumping back up and telling the official I was OK. Sounds like I knocked myself out for a moment.

That was the first time in the race I thought about pulling out… and we were only a mile in.

Those same monkey bars reportedly had a failure during or after the women's elite heat that closed several lanes, and many later racers were able to skip penalty-free. (We're tracking reports, and will update)

While Lake Tahoe raised the SRWC bar with terrain (and scenery), Spartan Race upped the ante with new twists on familiar obstacles that surprised many and proved challenging for some of the elite field:

While the endless climbs and rocky terrain were best suited for a mountain goat and played to the advantage of the mountain trail runners, the frigid water was a game changer – and a game-ender for some. Around mile eight, the swim in the chilly alpine pond shook up the men's and women's field, and was responsible for many a DNF later on in the day. 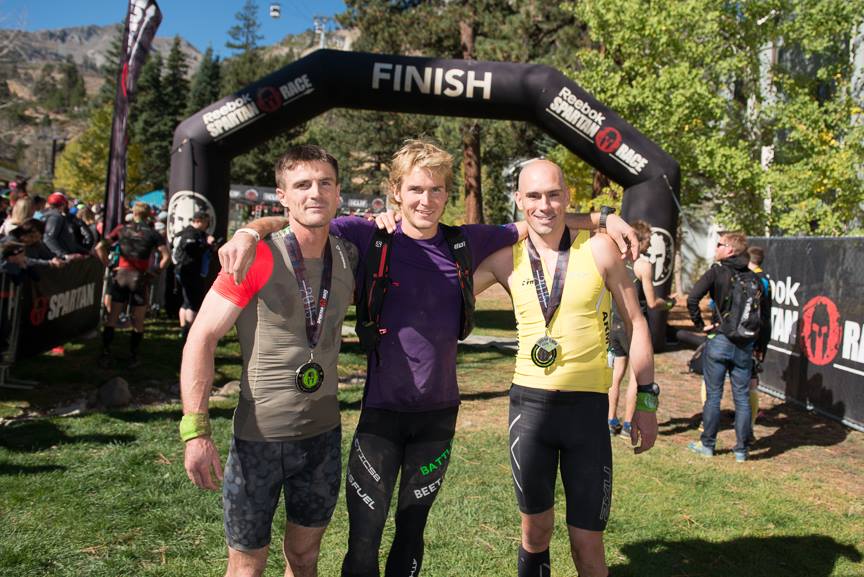 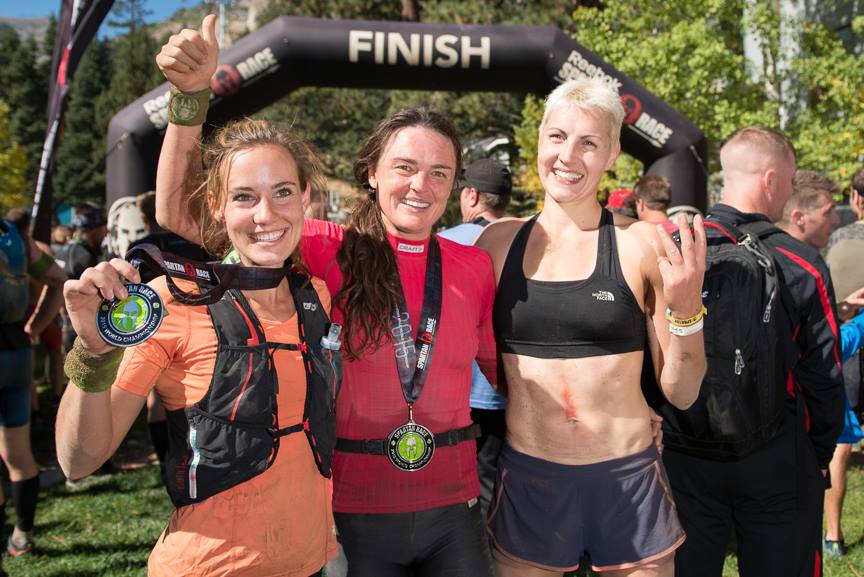 For the women, the race was decided on the Multi-Rig with 2-4 place all missing the last obstacle. Zuzana Kocumova would be named the new womens Spartan Race World Champion with a time of 2:53:03 making it cleanly through the multi-rig. Lindsay Webster would come into the multi-rig second slipping off the obstacle. As she was about 10 burpees into her penalty Rachel Paquette slipped off the rig as well and started to complete her penalty. Moments later Amelia Boone would attempt and fail the rig joining the other two in the penalty box.

Webster, would be the first to leave the burpee penalty area claiming a second place finish in 2:58:02. Paquette would claim third with a time of 2:58:43. Boone would finish moments later claiming forth place at 2:59:20. Rose Wetzel claimed fifth place for women with a time of 3:06:26.

More From Squaw Valley to Come

Spartan Race's 2015 season ended* with a bang on Saturday in their new, breathtaking – literally breathtaking as the altitude wreaked havoc on much of the field – venue, and Spartan Race 2016's season kicked off on the same course less than 20 hours later with a Sprint, Beast, and Ultra Beast. No rest for the weary, Spartan Race coins were immediately up for grabs to lock in spots for 2016's Staprtan Race World Championship.

Are YOU Ready to Spartan Up?

*There are still 20 Spartan Race events remaining in the 2015 calendar year that count toward 2016 standings & SRWC entry.
As always, you can save 15% off your Spartan Race 2016 registration w/code MUDRUNGUIDE15