Tough Mudder Philly – A His and Hers Recap Editors Note: For a change of pace and perspective, this is our first couples race recap/review. We are bringing you this in hopes of inspiring more couples to give the sport a shot that can create new memories and lasting experiences. I bring you, Jason and Lisa.

Tough Mudder Philly was originally scheduled to be one of the first events of 2015 in the Pocono Mountains. For unknown reasons, the event was rescheduled for Mid-October and changed locations to Coatesville, Pa. The Saturday/Sunday combo welcomed Mudders to the small town located about an hour west of Philadelphia.  The lasting memory of this event will likely be the chilly weather that hung around all weekend proving to be the extra obstacle.  In this review, you will get his/her perspective from Jason and Lisa.

Jason-The rolling hills of Chester County were an excellent element that tested the calves of Mudders all weekend.  The chilly weather didn’t seem to dampen the spirits of the thousands who chose to challenge themselves on the windy October weekend. Temperatures huddled on Saturday around the 40-45 degree mark, but the wind made it feel like it was in the 30’s. The Mudder 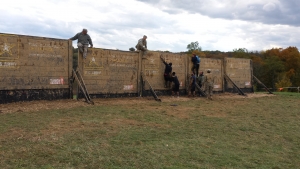 Village had its festive feel, but the weather afterward seemed to chase most people into the warming tent to warm up while having their beer. I cannot believe Shocktop sold too many additional beers on this weekend as I saw several men shaking so badly that their beer was spilling. Volunteers including the U.S. Army were everywhere offering encouragement and help when needed.

Lisa-As a distant observer, you would never know that the temperature at 8:00 AM on Saturday was only a mere 39 degrees. Temperatures did not seem to dampen spirit, and enthusiasm felt all around. Sean Corvelle was at the start with his ever-present smile and heartfelt words of encouragement, enthusiasm and inspiration. The unique highlight of this Tough Mudder was the presence of the army. Soldiers were stationed along both sides at the start, offering high five's to Mudders going thru the start gate and giving encouragement all along the course. The golden knights offered two shows in the sky with skydives at 10 and 2.  It was a unique sight to see and brought cheers from the Mudders even while in the middle of an obstacle.

Jason:  In ten previous OCR events over the past year, I have never had any cramping issues.  Most of the courses had some element of either hills or mountains, so I feel safe to say that I prepared for the vertical climb.  This was the first course I ran in 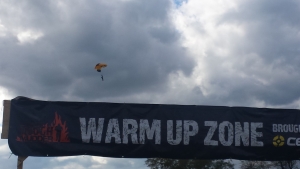 chilly weather, so I can only assume the cold led to cramping not only for me but also many people I passed on the course.  I loved the obstacles; however the placement of some had me head scratching. I don’t agree with Mud Mile right before Funky Monkey; mud-caked hands almost eliminates the possibility of crossing the grip demanding contraption, on a cold day nonetheless.  I always enjoy the Balls Out obstacle and Everest seemed to bring the teamwork element out of people.  To the people of Tough Mudder, double Mud Mile should be a constant at all events.  I will talk more about Mud Mile in the mud section.

Lisa:  In a nutshell, I would say this course showcases the beauty of fall at its finest: gorgeous colorful trees and plenty of rolling hills.  The Arctic Enema was followed by a series of hills in the killa gorilla which helped to keep your blood flowing on a cold morning.  For those who have anxiety over funky monkey and king of swingers, this race held your stomach in knots by waiting for these obstacles till the very end of the event.  As a smaller female, some obstacles prove a little bit more difficult due to an anatomical shorter arm span as compared to a man.  Although pole dancer is too difficult for my arm strength and the bars are spaced a little farther than is comfortable for me, I was able to complete the obstacle with a small modification of having my legs resting above the bars.

Jason:  The course had some natural mud at a few different spots along the way, but nothing major like Powerline Park Southwest of Pittsburgh.  Kiss the Mud made sure you didn’t stay clean as it was the first obstacle out of the gate.  The mud that found its way into those cracks and crevices that you are still getting clean three days later most likely came from the Mud Mile.  In this case it was 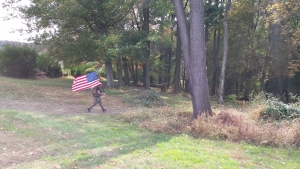 The Double Mud Mile.  At around mile 3 you hit the first part with about seven trenches that you had to cross each one 5-8 feet deep.  Somewhere around mile 8, you looped back and hit the back end of Mud Mile.  These neighboring trenches were what felt like 7-9 feet in depth.  Each round had to take the typical Mudder at least 20 minutes to cross and those that helped many others took longer.  It was at this point I was completely covered in thick mud that is always fun, but I was cold!

Lisa:  Since a lot of the course took place in open fields, there were a few “natural” mud creeks that one could choose to try to jump over or just embrace the mud and plow thru.  The most notable mud feature of this course though is without a doubt, the double mud mile.  A series of approximately seven trenches that required help even for the most seasoned Tough Mudder gave the perfect dose of unavoidable mud.  The added fun of having to go through twice makes it extra special as the second round of trenches were even taller than the first.  Due to the duration of time spent in the wet mud mile, it added an increased difficulty in really chilling you to the bone, adding another challenge to get warm and make your legs want to keep moving for the rest of the course.

Jason:  Tough Mudder put on a great event!  The location was beautiful, and the course was challenging.  The weather provided the extra challenge that made a somewhat difficult course instantly turn into a challenging course for most Mudders.  I would gladly run this course again next year, preferably in the month of September.

Lisa:  The combination of hills and cold weather pushed the Mudders to dig deep for motivation to keep going.  If you have never done a Tough Mudder in colder weather, it is an experience that will push you beyond other Tough Mudder races that you have done.  You couldn't always feel your arms or legs, but the love of the sport pushes you forward despite it all.