The battles that count aren't the ones for gold medals. The struggles within yourself – the invisible, inevitable battles inside all of us – that's where it's at.
– Jesse Owens

Let's forego the “Why do you race?” question and get right down to the subject of this article: wickedly cool medals that you've earned and love to show off. Whether you hang 'em all in your office on an elaborate medal holder or they spend their time in a box, you put in the blood, sweat, and (possibly) tears to claim them as your own and it's up to your discretion what you want to do with them.

Some make great bottle openers, others can serve double-duty as a dinner plate (see Little Rock Marathon), and possibly even be used as a grille ornament on your truck.

Below is my completely biased list of medals that I like the best, along with a sneak peek of what will be the coolest medal in OCR from Warrior Dash for 2016. Want to make your voice heard? There's plenty of room in the comments and on facebook.com/mudrunguide too!

Some medals are worth more than others for purely intrinsic reasons; I'm partial to my first marathon (OBX!), Ironman AZ, and a few others that I haven't given away to kids and are still somewhere in my office. I'll admit to coveting one “big deal” medal that I haven't earned yet, a Boston Marathon finisher's medal, and vow to fill that void / tick that bucket list item eventually.

As if just completing a marathon isn't a reward in and of itself, the Little Rock Marathon takes the award to a whole other level – Guinness World Record winning to be precise. This behemoth weighs in at 2.5 pounds and is over 8 inches across… and yes, this is just a FINISHER'S MEDAL, not the winner's awards – which we hope are even more impressive!

The Marine Corps Marathon (MCM) is just outside of the “big three” in terms of iconic races in the USA: New York City Marathon, Chicago Marathon, and of course, Boston Marathon. Absolutely a must-do race, MCM also offers a very distinctive medal that is near and dear to the US Marines, the EGA (Eagle, Globe, and Anchor) with a spinning globe in the middle.

Ragnar Relay and Ragnar Trail feature extremely unique medals, and were one of the first events to incorporate a bottle opener into their finisher's medal. Interestingly enough, at the finish of every Ragnar Relay I've ever done, they hand you the beer in a plastic cup, no opener needed. They probably figure that after 200+ miles, you're too tired for any more work. Little Rock Marathon – The biggest of the big Ragnar Trail at one point was going to be called “Ragnar Rugged” and this medal lives up to that name! The BAA unicorn is a medal of distinction and goal of many runners worldwide.

Here, in no particular order are my top 5 OCR medals for 2015, with one below that's getting some special love for innovation in '15 and even greater leaps in '16.

Spartan Race has this whole “trifecta” thing on lock; athletes from all over the world travel to multiple events in a calendar year to snag all (3) pieces of the puzzle to make an unique medal, it's really quite brilliant. As if that wasn't a huge accomplishment in and of itself, several athletes complete double, triple, and even ten (or more) by a grandmother and receive an enormous nX Trifecta award that grows larger with each trifecta completed.

The OCR World Championships features a large, substantial finisher's medal with a brushed finish that just oozes class; it's big wiuthout being obnoxious and a flashy design that's far from gaudy. A classy medal for a classy race, 2014 & '15 had different finishes for team vs. individual event.

Spartan Race makes the list again for the introduction of the Ultra Beast “Meduckle” – part medal, part belt buckle. Many people preferred the larger glow-in-the-dark UB medal from 2014, but any ultramarathoner will give a nod to the belt buckle (although technically, the Ultra Beast doesn't qualify for ultramarathon distance).

Savage Race makes their debut on this list (actually, this *is* the debut of this list) with a bigger & badder medal in 2015 that was extremely popular with SR fans, considering they have an exceptionally high athlete return rate, and you can only have so many similar ones in your collection… right?

Speaking of mixing things up a bit, Terrain Racing  took their Mud Monkey logo and moved it into prime position in their marketing and awards. 2015 featured 4 different colored rings with a big ‘ol angry monkey cutout in the middle along with some special medals for completing 2 or more. In 2016 there'll be plenty of opportunities to pick up an Angry Monkey or two with Terrain Racing events expanding nation-wide across the USA. Spartan Race Ultra Beast “Meduckle” is either loved or hated Terrain Racing went big with their Mud Monkey this year

Warrior Dash rolled out a whole new medal design for 2015, complete with two bottle openers in the shape of their trademark horns. While it might be cool to pop open 2 beers at once (we tried it, you catually can't) the brilliant upgrade was adding a magnet on the back of the medal so it's always handy!

Not one to rest on their 2015 accomplishment, Warrior Dash is upping their game even farther in 2016 with a 3D helmet medal that – guess what – operates as a bottle opener too! But seriously, the new 3D medal is extremely cool and a very neat advancement in the design of medals. Check out the video for slow-mo of uncapping some frothy goodness. Enjoy! 2016 WD medals are 3D, and still awesome enough to open one beer at a time

How Do You Display Your Medals?

Honestly, it started out as a goof to put an Alpha Warrior medal on my Jeep, and I was shocked by how many people asked me about it: “Is that some special model Jeep? I've never heard of an Alpha Warrior one before!” Before getting rid of the MRG Jeep, I pulled it off and had it stuck on my workbench in the garage for a few months, but the newest MRG vehicle was just begging for a new grille ornament. Truth be told, it's not even perfectly centered! 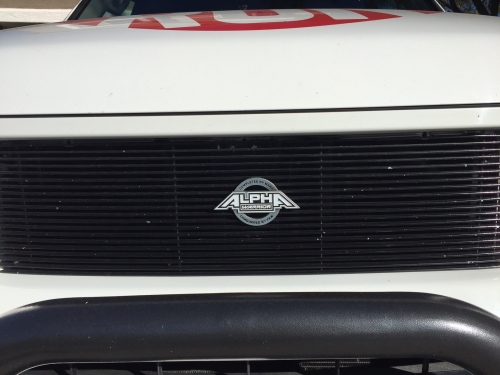 What's your favorite use for medals? Share your ideas in the comments or on the MRG Facebook page. Here's a great example; our Editor-In-Chief Margaret Schlachter likes to make wind chimes in her garden: 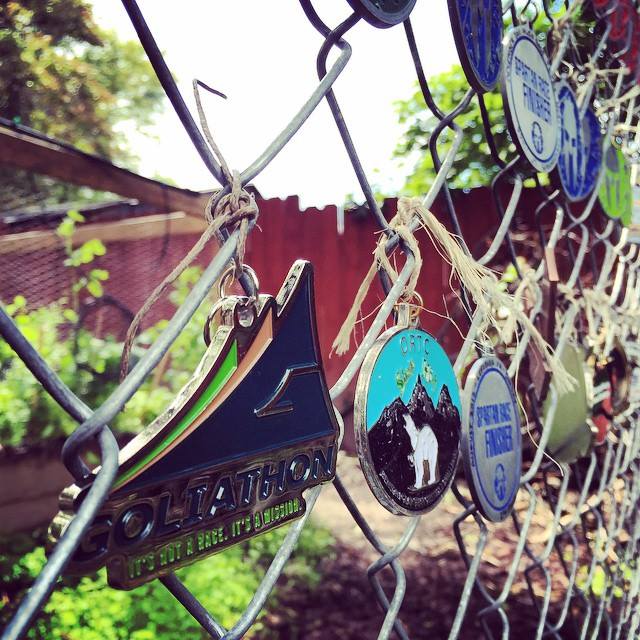 43shares
Disclaimer: The viewpoints expressed by the authors do not necessarily reflect the opinions, viewpoints and official policies of Mud Run Guide LLC, or their staff. The comments posted on this Website are solely the opinions of the posters.
By Brett Stewart|2015-11-30T15:02:16-05:00November 30th, 2015|Op-Ed|1 Comment