“Jumping Cholla!!!” Amelia proclaimed loudly, bringing me back to the reality that I'm actually operating a motor vehicle.

“Um, ok?” I asked her quizzically.

“Jumping Cholla,” she proclaimed again, pointing to the nearest street sign. “The name of that street is Cholla Street. Jumping chollaaaaaaa…”

Sadly, I knew what she was referring to. Heading towards Lake Las Vegas the day before World's Toughest Mudder, I allowed my mind to wander back to the first weekend of February, my first race of the year. It also happened to be my second date with Amelia. We came to the Super Bowl to root for our favorite NFL teams. Amelia is a well documented Seahawks fan, and I, a loved (throughout the league) Patriots fan.*

As part of the date weekend, Amelia had asked me if we could run a 15-mile race the morning before the Super Bowl. Mind you: this is my second date with the girl. While it's a strange thing to request, who was I to argue? “Sure,” I said, thinking foolishly that I could probably beat her in a footrace. You may laugh as this thought entered into my mind: “She's an obstacle course racer… I should be able to beat her in a running race.”

We woke up that morning at 4:30 am (Amelia, of course, was up before I was). While we're getting ready, she turns to me and asks, “Matty, if you wouldn't mind, there's this guy that needs a ride to the race as well. He's a Spartan guy.”

Back in February, the only exposure I had to Spartan Races were through Amelia. I was strictly a Tough Mudder guy though I didn't consider myself militant**. Those that do Tough Mudders consider them a personal challenge to overcome, whereas Spartans use the race as their measuring stick against others. Because I'm not a very competitive person, I stayed far away from Spartans. But because I needed to understand Amelia better, partaking in Spartan Culture would do me a world of good. We arrive at a small neighborhood on the outskirts of Phoenix, and an unassuming, quiet, skinny dude gets in the backseat. “Chad Trammell,” he says to me with a perfect teeth smile. “Nice to meet you.”

Chad was in town for the Super Bowl as well, as he is also a die-hard Seahawks fan (a fact casually left out by my date). Amelia and Chad start chatting it up while I start thinking how poorly this date is going. My contribution to their conversation were comments like “Bledsoe was a great quarterback, and a shared treasure among our teams,” or “Spartan Race… is that like a Tough Mudder?” During the drive, Chad revealed he was a dentist who was from the Northwest but recently moved to Alaska to live. I was fascinated by his decision to move there and was also happy to hear that he had a career outside of OCR. 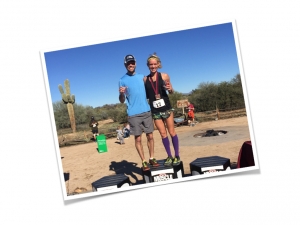 One of these people would be featured on NBC Sports Spartan Race in 2015. The other should have been.

We get to the race and proceed to sign in and warm up. There, Amelia introduced me to two more (very nice) people, Eric and Nina Acuna. Being a bit nervous, I was thinking to myself how I probably wouldn't remember a single name; clearly, time has proven me to be a dummy.

We toe the start line, and the (proverbial) gun goes off. I consider myself (kind of) fast, but Chad ran off into the sunrise with some other fast dude. It took them about 40 seconds to get 15 minutes ahead of me. And Amelia, the girl I was attempting to impress? Well, the good news is that she didn't “chick” me once the entire race. The bad news is that she didn't “chick” me because she was never behind me. Zoom. Gone. The girl is a freaking Chocobo.***

I was able to keep within eye shot of the bouncing pony tail for about 35-40 minutes, roughly 5 miles. After that, my pony tail radar went offline. I thought that perhaps she wasn't pacing herself that well, that I'd be able to overtake her in the second half of the race. Another 20 minutes go by, and still no Amelia in front of me. We approach the 4 mile “out and back” part of the course, and I'm maintaining a decent speed. I started to wonder if I might be carrying some extra weight when an ouchie is felt up and down my hip and leg. The guy behind me stops and yells out, “JEEZUS, DUDE, ARE YOU ALRIGHT?!? THAT WAS F**KIN' AWESOME!!!!”

I looked down and saw several little cactus balls attached to my body. According to the befuddled gentleman behind me, I passed this cactus and must've said something about its mother (yes, this was the way this guy positioned it to me). So it threw its little cactus balls at me. I've heard many elite excuses as to why someone doesn't do well in a race… but this one probably tops them… the race that I was attacked by a jumping cholla.****

As I'm removing the cactus balls from my leg, I see Chad and the other guy coming back from the “out and back” part of the course. “No way,” I said to myself. “NOBODY is that fast.” I looked down at my watch and did some quick math; both of them were averaging under 6-minute miles. I finally peel the last cactus ball off and start running. 15 minutes later, I see Amelia heading back from the “out and back.” “Hey, Amelia, how are you…” *WHOOSH* right by me… as if her facial recognition was malfunctioning.

A lot more running happened, and I was able to finish the 15 miles in 1:59:59. For 15 miles and about a thousand feet of elevation gain, I was pretty impressed. But Amelia finished in 1:47, taking first place in females. And Chad? He finally pulled away from the dude he was racing, winning the race and finishing a full half hour in front of me. 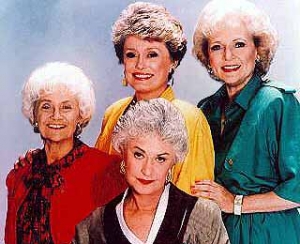 The way he acted after the race, you wouldn't have even guessed he had won. He was the exact opposite of my impression of Spartan Racers; calm, approachable, always smiling, and more interested immediately in the Seahawks. “You could've watched an entire episode of Golden Girls waiting for me to come in,” I remember saying to him. “With commercials!” I took a picture of both Amelia and Chad on the podium, winners of the male and female categories.

Back in the present, and out of my own prickly thoughts, I smiled. “Luckily there are no jumping chollas in the Las Vegas desert,” I said to Amelia, continuing our drive towards the World's Toughest Mudder venue. In hindsight, the date didn't go that badly, and Amelia still kept me around, even after the Patriots won.***** And Chad would be joining us in the desert for World's Toughest Mudder, a race I thought he COULD do well at.

It’s a good thing I brought Golden Girls Seasons 4 through 6 with me. 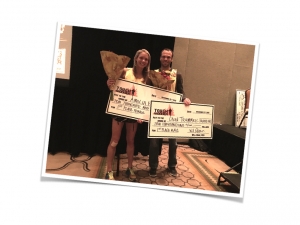 *This photo sums up my thoughts on Patriots' antagonists: 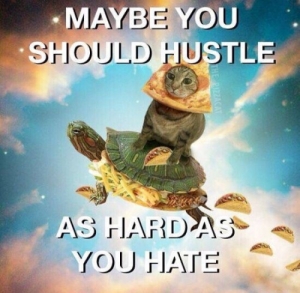 ***If you got that reference, extra dork points for you. If you didn't, look it up

****Me thinking it was pronounced ‘cho-la,' but luckily, Cassie Harris's five-year-old son, Jude, wasn't going to let me walk around like an asshole my entire life (“It's choy-a, Uncle Matty.”)

*****Barely. I almost got tossed onto the field as a “throw it back” sacrificial lamb immediately following “The Interception.”

0shares
Disclaimer: The viewpoints expressed by the authors do not necessarily reflect the opinions, viewpoints and official policies of Mud Run Guide LLC, or their staff. The comments posted on this Website are solely the opinions of the posters.
By Matty Gregg|2015-12-08T09:43:59-05:00December 8th, 2015|Op-Ed|0 Comments

About the Author: Matty Gregg