It seems so long ago that I ran my first BattleFrog race, but it was only February of this year.  So much has happened in between I suppose it's understandable.  Two Tough Mudders, three Spartan races, a Savage race and three more BattleFrogs; not to mention a trip to the OCR World Championship mixed in.  It's been a long road back to Miami and one of the most anticipated races of the year for me…so far anyway.

One thing that did improve was the weather!  It was the first time in the last four races, as well as the February race, that rain wasn't in the mix.  I realize the weather isn't exactly in their control…but certainly a welcome change!  Since I had worked on the parking again this race, I also knew that signage wouldn't be an issue this time either…no wandering around the lake looking for the entrance.

And when you approached the festival area it was obvious it was much improved over the first race.  Larger and better organized, it fed logically right from registration to bag check to changing and then into the stage and start/finish areas.  They were also able to arrange the Elite and BFX tent area for smooth transitions from lap to lap.  Although I don't race BFX (yet??!!), this was the perfect venue for it…a challenging course but little elevation change and relatively mild weather.

So after just a few minutes prepping, I was ready for the start corral once more and was treated to another great sendoff by Coach Pain…certainly one of the best motivators in the business.  No delays or over-crowding this time in the heats and that carried over to the first swim.  Although they staged the entry into the water for safety (no mass ‘wildebeest' plunges into the lake), the lanes had been reworked to allow virtually constant flow.  And from that point, the natural running paces spread things out, avoiding bottlenecks for most of the race. 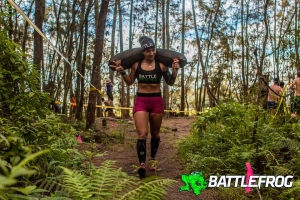 We hit the ramp walls early (thanks again Icebug for great traction even after the swim!…personally I'm not a big fan of publicly face-planting on an obstacle), a cargo net ‘high-step' and the over-under-thru before hitting the second and much shorter swim.  On the back side of the lake, we started hitting well spaced-out obstacles, which is one of my few issues with races in general.  I hate running!!…so having obstacles spread too far apart is always a huge negative…but not today.

Coming into the wreck-bag carry, we completed 60 degrees and the inverted wall, along with one of the shorter wall sections.  I don't know why, but I enjoy that wreck-bag carry…and traversing the shaded trails there in Amelie Earhart Park was a pleasure.  After some more meandering along the trail we came to the rope climb (and failure was not an option this time…credit the BFX athletes for their inspiration!) and then came the 8′ wall.  This was one of the only real bottlenecks of the day.  Just not enough space to put more walls and there had to be a good 10-15 minute wait.

The monkey bars came next…with a ‘twist' (pun intended!) as the bars ran straight across the top and tended to turn from other racers going across.  Not that it mattered to me, unfortunately…my recovering arm decided to sit this one out, so I did my penalty and headed on to the Normandy Jacks.  This was a nice setup and for those who realized it, you could pull yourself along the water with just your arms…fast, cool and easy! 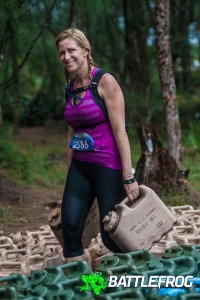 However, after a quick 12′ ladder wall climb, you were now coming into the tougher obstacle section of the race.  The jerry can carry (which I did not enjoy…brutal always comes to mind) lead into the third and final swim.  Then Tip-of-the-Spear, which, outside of the rig, is likely the most feared obstacle on the course…or should be.  Feared…hated…however you look at it, this obstacle takes its toll on all racers!  Although I made it a bit further on the ‘finger-grip' section than expected, it is still a bit beyond me…even though I do love the rope traverses (which I did both sections of and rang the bell, despite having fallen off the middle section…hey, so sue me, I did the penalty anyway…I just like ringing the bell!!).

I did manage the Delta Ladder and 12′ rope wall (strange as it sounds, another favorite of mine) before hitting that most feared obstacle…The Rig!  Even though I wasn't able to get very far on it (remember the arm checking out for the day earlier??!) BattleFrog had made some changes to the configuration, making this rig the first one I believe most serious racers could accomplish.  I'm looking forward to a shot at this once my body heals!!  Then it was onto the brand new obstacle…Hooyah.  While not necessarily a physically or mentally demanding obstacle, it was challenging enough…and a bit of fun…heading right into the finish line.

In the end, this was another good race day on a very satisfying course!!  Volunteers on the course?….plenty and very enthusiastic…although the word burpee came up a lot, which is inevitable I suppose.  The fact is, many racers these days skip the penalties altogether, so if they do anything, it's a win. 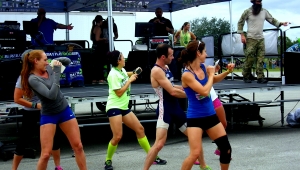 However, the greatest change…and a huge improvement not only from February but OCR races in general…was the festival.  Not only the organization but there was a huge tent set up right in front of the stage.  One of the few times that racers and spectators had somewhere of significant size to rest and eat…eliminating a major hurdle to making the festival more than an after-thought.  Dancing broke out regularly!!!!…thankfully, though, to the relief of all, I was able to refrain myself!

Then, of course, there was the Old Glory Ceremony, unique to BattleFrog.  In stark contrast to the music and dancing just minutes before, it is a solemn tribute to the Navy Seals and something you need to experience if you haven't already. 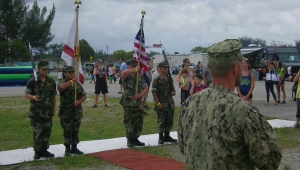 Unlike 2014, this Miami race is not the BattleFrog 2015 finale.  They have their Championship coming up this weekend outside of Orlando.  No doubt that course will be one of their most challenging of the year and rumors abound regarding the possible unveiling of some new obstacles!  Although my schedule got an unexpected glitch in it, I still plan to make it there for this race…one that I do not want to miss!!

The Rig…Ultimate Challenge of Destroyer of Souls

Be sure to follow all the action this weekend from Mud Run Guide at BattleFrog Championships.