In the last 24-hours, much talk has been centered around Tough Mudder. Yesterday athletes in the community were sent out welcome emails to become part of the new Tough Mudder Ambassador program. Within one of the emails apparently a few key lines were quietly added in which got the community buzzing yesterday, an apparent leak with the location of the highly anticipated WTM 2016 location.

We reached out to one of the confirmed ambassadors about the emails they received; they forwarded us this email…

We’ve got some new info for you – like the codes for your FREE event and a bit more on #ITSALLBEENTRAINING.

We’ve said it before (but we’ll say it again), #ITSALLBEENTRAINING is our epic January 2016 campaign that celebrates badass athletes, thrill seekers, risk takers, and adrenaline junkies. #ITSALLBEENTRAINING reminds you that you’ve been training your whole life for Tough Mudder. Every time you chose dare over truth, lived life on the edge, defied gravity, or rallied your friends to go on a backyard adventure – it’s all been training.

We’re psyched to share with you (and Mudder Nation) the content we created around this campaign, but unfortunately we can’t….until January 4th. Just know it’s pretty awesome and will give you chills (the good kind, promise).

Enough mush, this email is to give you the deets you’ve been waiting (patiently) for.

A few things to note after the thrill of getting free stuff wears off:

And, drum roll… below you’ll find 2 codes for one for you and one for the friend you’re initiating into Mudder Nation in 2016 to run any Tough Mudder event (excluding WTM)  for FREE (try not to lose these). Already bought a ticket for 2016? We can comp it for you if you'd like.

Got questions? We’ve got answers. Give us a shout if you’re not as psyched about this as we are. 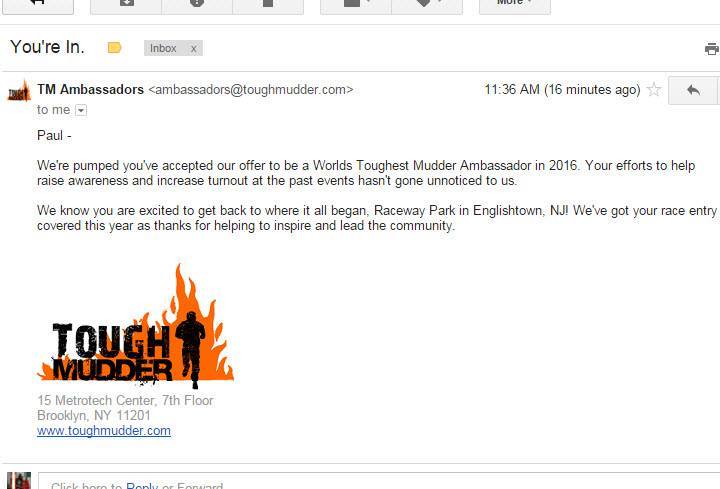 We spent the morning doing a little more digging in regards to this email that seemed to be sent to many members of the Tough Mudder community. The reactions have been across the board as many seemed excited with the idea of the race returning to it's roots while others were saddened they would not be able to give Vegas another go.

After some more digging, all the emotions expressed this morning were for nothing other than an elaborate ruse orchestrated by a known trickster or tricksters in the World's Toughest Mudder community. Normally, these jokes stick within the tight community but this mornings recent joke that appeared to be in response to mixed emotions from yesterday's ambassador emails reached a bit further.

We reached out to Tough Mudder Headquarters directly this morning to get to the root of this story, and Carol Gottchall, Communication Manager at Tough Mudder commented back with this official statement.

I can confirm that the email screenshot is a fake. Below is the only ambassador email that's been sent with the “You're In” subject line. I've blurred out the recipients but otherwise this is the entirety of the email.

We will be announcing World's Toughest Mudder 2016 details next month, and will let you know as soon as we do!

Look for the real location of World's Toughest Mudder from Tough Mudder Headquarters after the holidays. Then the community can all prep for another year, debating gear, training, shoes, and nutrition. Until then happy holidays.