The HH12hr is a unique event. Partly an exercise in team-building and partly an individual competition with strict pass/fail criteria and time hacks, it is designed to test athletes mentally and physically in new ways and is arguably the toughest piece of the Spartan Endurance trifecta. While completing the Ultrabeast is an enormous feat, the distance and requirements are well understood going into the race; with the HH12hr, the only thing you know is the duration. The designers are fiendishly good at developing new challenges for the athletes, and ensuring that no two events are alike. Also, the events are designed to have a relatively low success rate; the race directors aim for ~40% but are happy with fewer if that’s what happens, and often stack the deck to make sure the numbers aren’t significantly higher.

What follows is a report on the HH12hr, Class 016 in Temecula, CA from my exquisite friend, Le Roux Konig, a previous HH12hr finisher. While many of us were running the Sprint or huddling under tents trying to get warm, he and a few others were volunteering their time to help with the 12h hurricane heat in the wind and rain, and to bear witness 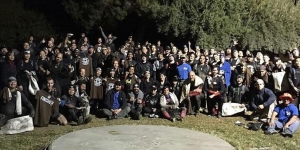 to the feats of the athletes who showed up to be tested in this crucible.

Hellmecula has frozen over. I remember thinking that standing at one of the HH12hr checkpoints about halfway into the event; layered in warm and wet weather gear, I was still soaked to the skin from the persistent rain and wind. But if I, a volunteer helping on the event, was cold the athletes participating were suffering through something remarkable.

The event started pretty subdued, as all of these things normally do. Participant’s huddling together, talking softly
amongst each other, comparing gear, sizing up the competition and making frantic last minute adjustments. This was my first time on the spectator side of a 12h endurance event though I’ve participated in several, so I also knew that they 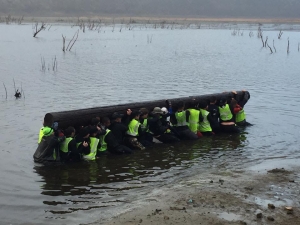 were all feeling that pent up anxiety and excitement that starts at the pit of your stomach and reaches into your chest.

Just before 7 am the duo of race directors Steffen “Cookie” Cook and Kyoul Cha showed up and lead the group of 33 brave souls to their “Nest”, the location where the event was centered. After a quick briefing, the group was marched into the lake where a grueling welcome party got underway. Hydroburpees – five per minute, for well over an hour (extra time was added when an HH12hr participant showed up to the event late – mental note: NEVER be that person). While it was not raining at this point, it was cold. And the water was cold. Whenever possible the participants huddled together to share body heat. True to Spartan fashion this was also where the Warrior Ethos at the heart of Spartan endurance events was 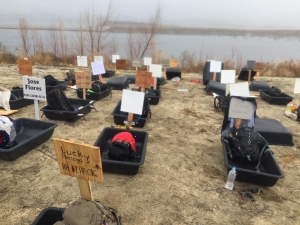 The hydroburpees was only alleviated by hoisting a monster log on their shoulders and doing squats while standing knee deep in the chilling water. The welcome party ended with some of Kyoul’s Towel Torture. Various dynamic tension bodyweight exercises were executed with the help of a towel, their teammates, balance, and tenacity. This was also when the hardest aspect of the HH12hr was introduced; competition. Unlike a lot of endurance events the HH12hr has an individual competition portion in addition to the team activities. You need to complete all the tasks given to you in the allotted time to be allowed to continue. The rain was starting to come down now, and the group found themselves battling the elements and each other.

First up was a scavenger hunt. The instructions were simple; retrieve four items from four checkpoints along the regular Spartan race course and do it before the allotted time is up. The thing is they were not told how much time they had! And to further complicate their lives they were told that they had to carry all of their gear and all the scavenger hunt items in big black tubs (which were on the required gear list). No rucks were allowed.

The looks on some of their faces were quite amusing; from pain to perplexion. However, they quickly resigned themselves to their lot and started turning the tubs into sleds. And one by one they were off to retrieve precious items. I was stationed at one of the checkpoints for the duration of the scavenger hunt. By now it was raining steadily, and the hills of Vail Lake were turned into rivers of mud made worse by the torrents of regular competitors who came out to 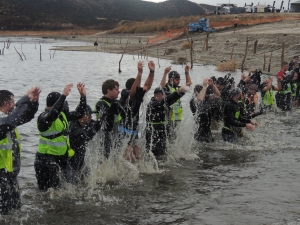 STFU on the Spartan Sprint course. But they pushed on. One by one they came by my station in a steady stream; sometimes to pick up the sandbag that they needed and other times passing by, dragging weighted improvised sleds that were battered and broken by the rocky trails on the way to another checkpoint. As the time went by, and weather conditions worsened, the stream slowed to a trickle, and I started to notice that I wasn’t seeing all the competitors anymore. Some had completed the task; others had dropped out through injury, hypothermia or other reasons.

When the time hack for the scavenger hunt was called, we made our way down to the nest. We passed four competitors; still resolutely marching on to the nest with their final items, but for them it was too late. They were informed that they did not make the cut. Understand that none of these people quit. They just did not make it down the hill fast enough one last time; whether from getting lost, equipment failure or injury. But they did not quit, and to have seen the disappointment on their faces as they processed that fact was tough. But I also know that these are people who will not let that fact get them down. Instead, I am totally convinced that I will see them at another endurance event soon.

At this stage 14 of the original 33 were still in it. The next phase of the event was designed to pit the participants against each other and themselves in strength, fitness and endurance for another four 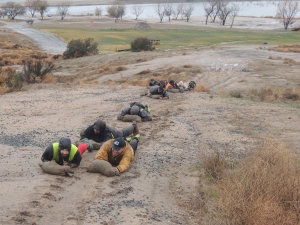 dark, wet and windy hours.
At this point, Le Roux was separated from the remaining competitors, and the rest was pieced together from a few online posts.

First was a piece of misery dubbed the Belly Rub Race. Participants had to push their sandbag in front of them up a hill and around a 500-yard muddy track while maintaining belly to ground contact the entire time. 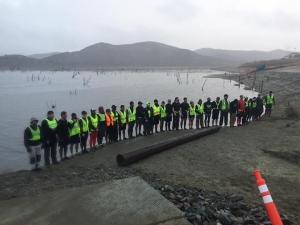 Next up was an elimination race. The remaining competitors were divided into three heats, racing against each other in feats of strength and skill utilizing the rope climb, herc hoist, and multi-rig obstacles. The slowest of each heat had to face one another in a final competition, and the last to finish here was heartbreakingly eliminated from the HH12hr at the 10½h mark.

Battling the wind and rain in conditions that forced the cancelation of a couple of afternoon heats at the Sprint, embracing the suck and silencing their inner demons, and competing head-to-head in a series of elimination challenges, all of the athletes who took on this challenge deserve a huge bow of respect. Those who persevered and received their patch truly earned it in one of the toughest HH12hr events yet. 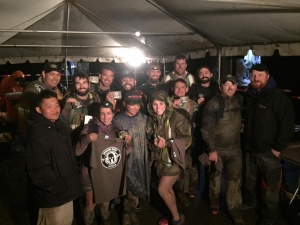