SURVIVAL RUN NICARAGUA 2016: By the Numbers 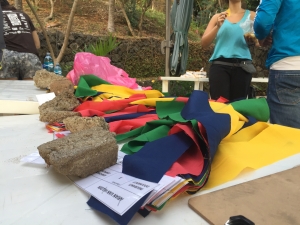 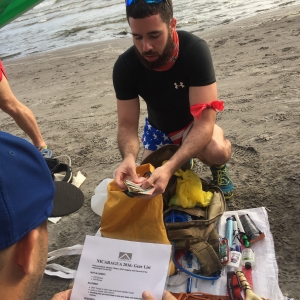 At 7:00 am racers assembled at the start/finish area in front Santo Domingo for gear check. Here racers had to show that they had all required items on their gear list and also that they were not carrying any of the banned items (GPS or Cell Phone). Racers were given a colored cloth, and after gear check was complete, the racers were informed that packet pickup would be a team challenge based on cloth color. The race would start when the first team completed packet pickup. 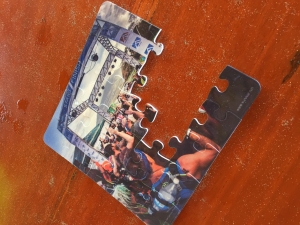 Each team was instructed to carry several 20-foot long lengths of bamboo down the rocky shore for about 3 kilometers to an eco resort Finca San Juan. Once the whole team arrived at the beach of Finca San Juan they had to work as a team to complete three tasks to retrieve puzzle pieces, build the puzzle and complete the challenge. 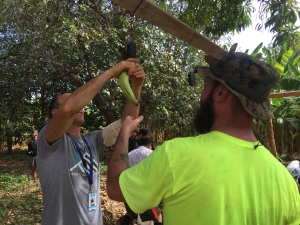 The three challenges were digging about 4 feet down in the sand to find a bag of pieces, find additional bags of pieces in a plantain field, and the last challenge was to build a raft and float several large rocks out to an island successfully. On the island, they retrieved a rubber container full of eggs. Each racer would have to produce and unbroken egg at each challenge in order to attempt it. Once the team constructed their puzzle they received a bracelet which could be used once to bypass specific challenges in the future. The red team would be the first to complete the task, and the race would officially begin at 9:17 am. 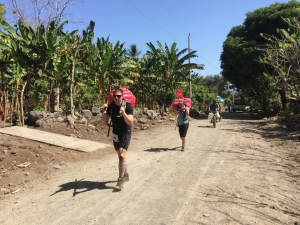 Checkpoint #1
The first checkpoint was on the Finca San Juan Plantation. Men had to fill their sacks with 30lbs of plantains, 20lbs for women and 50lbs for teams, and begin to carry them toward the town of Altagracia. Before reaching the town, they turned up towards Volcano Concepcion and began a hot trudge up a dirt road into single track trail to La Sabana. 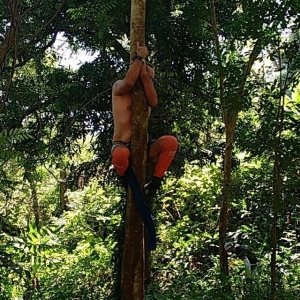 Checkpoint #2
Athletes arrived at La Sabana with their plantains and egg intact. Here they had to retrieve materials to build their own slingshot by climbing up a tree. Once they built their slingshot they could continue up the trail with their plantains. Two athletes dropped at this checkpoint.

Fifty-eight racers began the nearly vertical climb up the volcano with their plantains in the scorching tropical heat. They had until 5:00 pm to reach the top of the volcano and traverse around the rim of this active volcano. 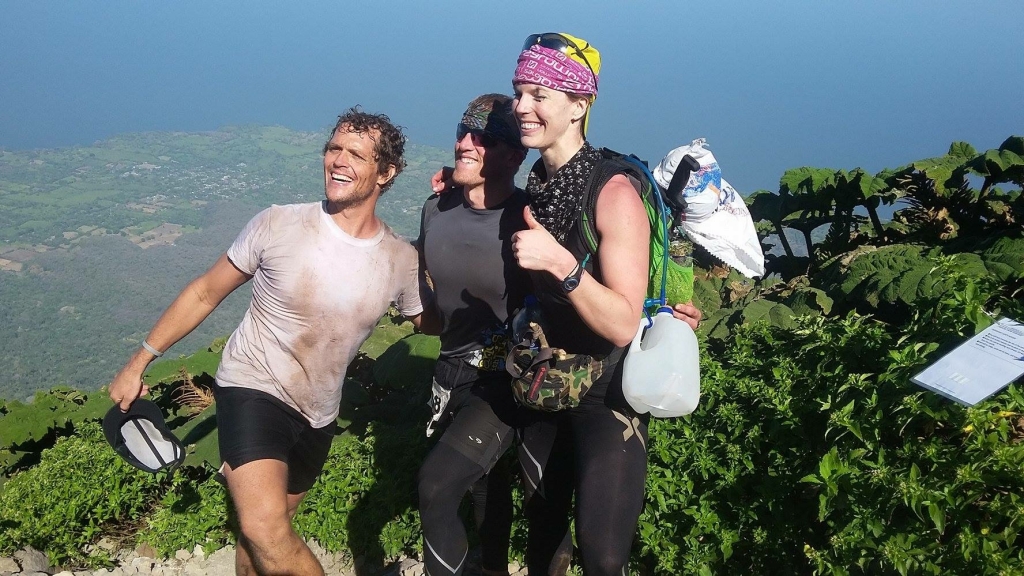 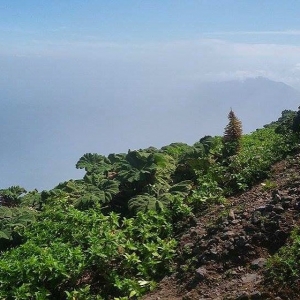 Of the sixty athletes that started thirty-seven made it to the top of the volcano and completed the traverse. Thirty-three of the athletes arrived at the top before the cut-off with plantains intact. Four athletes arrived at the top minutes after the cutoff without their plantains but were allowed to complete the traverse and experience the whole hike but would be out of the race officially. All other racers that missed the cutoff were escorted by guides down the volcano back to La Sabana tree climbs.  At the end of the traverse, they encountered their next challenge, putting their slingshot to use. The racers had five chances to hit a target with their slingshot. If they successfully hit the target once, they received their first wristband. Then descended the volcano through what is locally referred to as “the valley of death”. 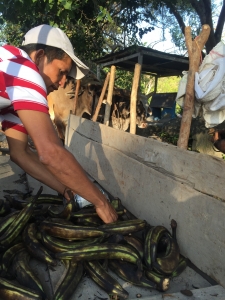 After a difficult climb down the volcano thirty-two athletes would successfully complete the plantain challenge dumping their plantains into a local farmers ox cart at Los Ramos earning the second wristband. Here they received the first piece of the four-part medal “FAIL”. Athletes who made 8:00 pm cut-off for this checkpoint could continue in the race, others their race was finished. The four athletes who did not carry plantains the entire way would not earn the FAIL medal, and one racer got took a wrong turn and ended up at a later checkpoint also failing to complete the tasks to earn a FAIL medal.

Before leaving Los Ramos athletes had to complete and additional challenge a second slingshot challenge. This was the first task racers could exchange their special wristband from packet pickup to bypass the challenge. Race leader Paul Romero used his bypass to skip this challenge. 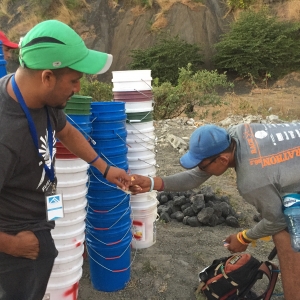 Seventeen athletes successfully completed enough tasks to move on within the time constraint to the Sand Bank challenge. Athletes ran down the road and purchased a bucket from a local in which they had to move ten loads of sand to a designated spot. The locals use this sand in their construction projects on the island. Before leaving the challenge, they also had to retrieve a volcanic rock from a designated area after climbing a large hill for their next wristband. Three athletes would be cut here due to time or self-drop. 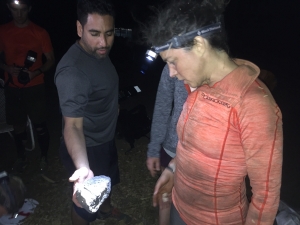 As the remaining 14 competitors raced against each other and the clock they arrived at Tesoro del Pirata for some petroglyph carving and a nighttime swim. The racers had to use their machetes to carve both the islands into the volcanic rock they had retrieved at the last checkpoint. After a local master carver had approved their carving, they received a bracelet and then had to swim out to a floating buoy and retrieve another bracelet before moving onto the next checkpoint at Santa Teresa. Two racers would not make the time cutoff at Tesoro del Pirata and would be out of the race making it 12 officially still racing. 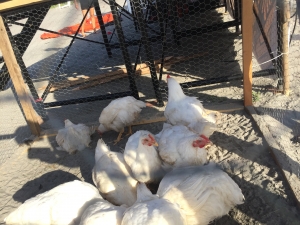 As racers reached Santa Teresa, they were checked in and checked for the correct number of wristbands. Here they would receive their next medal of the series “I” to accompany their “FAIL” medal. After receiving their medal, they had to buy a live chicken from a local and were directed down a trail through several trails back to Santo Domingo where they dropped the chickens at the start/finish area to receive the next wristband. Before leaving the beach athletes would retrieve another wristband out of a tree and pick up a long 20+ foot piece of bamboo and traverse down the beach and rocky shore to Finca Feliz where their next challenge awaited before the 3:30 am time cutoff. 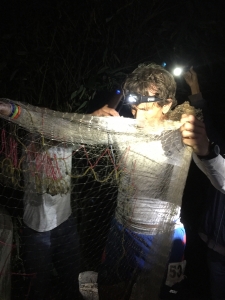 Eight of the twelve runners would successfully arrive at Finca Feliz with their bamboo before the time cut-off. Here they climbed another tree to retrieve another wristband then a local fisherman taught them how to fish in the traditional Nicaraguan way, with a net. After a quick lesson, each racer had to catch and clean their fish and wrap it in a leaf before moving onto a series of tree climbs at the next stop at Totoco Eco Lodge. Once the racers reached Totoco with their bamboo and egg still intact (or another egg bought along the way), they used the bamboo to climb the trees just as the locals often do when harvesting plantains. All eight racers successfully retrieved wristbands, and here they received the third piece of the medal “DID” making their medal say I DID FAIL. 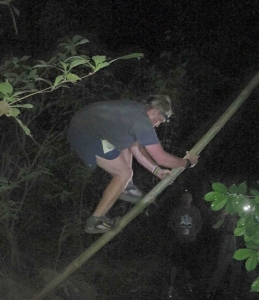 From here the race was as much about the clock as it was about the competition among the athletes. Athletes were instructed to race up the Maderas volcano where at the top they would swim in a lagoon in the crater to retrieve another wristband then race back down to Totoco. All eight racers were still in the competition and successfully completed this task. On the way down several athletes knew they were racing against the now extended time finish cut-off of 10:17 am.

As the racers left Totoco, they were instructed to run back to Santo Domingo and pick up a small pile of firewood from race officials before running down the long beach to the finish line. As the clock ticked away racer Dylan Morgan (South Africa) and Paul Romero (Canada) would be the first to cross the finish line together. They presented their egg, fish, and three medals before receiving the coveted DID medal completing the set of I DID NOT FAIL.  The two would be the first co-winners of SURVIVAL RUN NICARAGUA just after the 23-hour mark of the race at 8:10 am.

Next, Nicaraguan, Johnson Cruz would finish his third SURVIVAL RUN claiming third place. In fourth would be Arian Van Helden from the Netherlands. Van Helden is the first person to finish both SURVIVAL RUN AUSTRALIA and SURVIVAL RUN NICARAGUA. 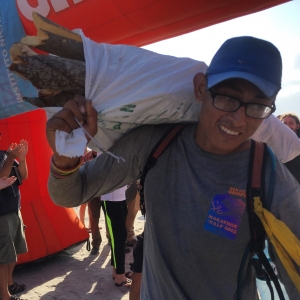 In fifth place, French Canadian, Helene Dumais, would be the first women in the four-year history to complete SURVIVAL RUN NICARAGUA. In sixth place, Curtis Pote (USA), would finish to his dad waiting to give him a hug at the finish line. The Nicaraguan jungle is a far cry from the old Iowan winter.  Team David consisting of David Dietrich and David Muhn would cross the finish line a half hour after the time cut-off and finish the race with only three of the four medals. 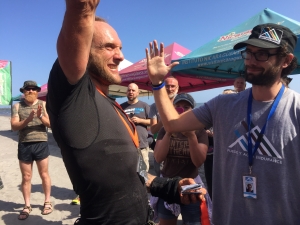 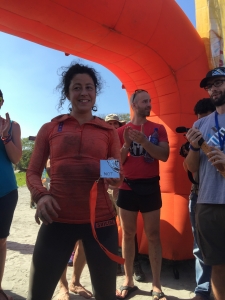 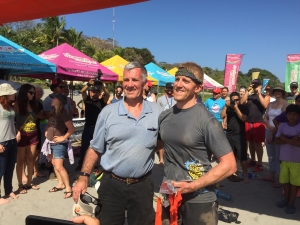 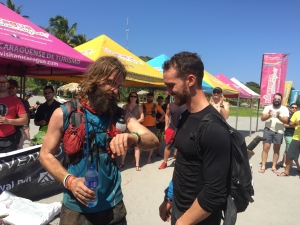 Overall, 2016 SURVIVAL RUN NICARAGUA proved to be the most challenging course in the race's history but also boosted the highest finish rate yet. The caliber of athletes was world class yet again this year. Many are resting today before attempting the Devil's Double, which entails completing the SURVIVAL RUN NICARAGUA & FUEGO Y AGUA NICARAGUA TRAIL RUN 100K. We will be covering all the action starting tomorrow morning.

Check out all the photos and updates from the race on our Official Coverage Page.