BattleFrog BFX24 – The Joys of Covering a 24 Hour Race There was something inevitable about being a part of this race for me. I've always been intrigued with OCRX endurance races, even though I haven't had a chance to participate or even watch one. So when BattleFrog initially announced the BFX24, I knew that I wanted to be a part of that somehow.  Initially, when BattleFrog announced the race, though, I had planned to run the 24 hours or at least as much of it as I could. However, injuries and a new job kept me from recovering and training enough to be able to attempt it. So I felt the next best thing was to participate in the coverage for the race.

Naturally, covering an event like this is not something you want to jump into the day before.  So a good three or four days ahead of the race I contacted Mud Run Guide about covering it with them.  I suppose they're a bit used to that with me…I haven't exactly been planning my OCR schedule months (or even weeks) ahead like most racers.  In fact, though, the only people crazy enough to want to cover a 24-hour race were either already running it…or pitting for their friends or family that were.  Fortunately, for me, when you're looking for someone to do something crazy in OCR, Margaret and Brett know that I'm just the guy they can count on to do it….or, at least, try it! 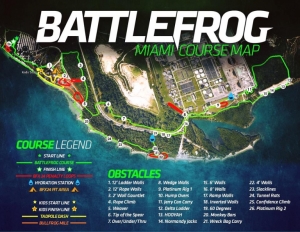 So Friday night after work, I headed over to the race venue.  Now you would think, after all, I'd heard all week about how beautiful Key Biscayne was, that the race was actually ON Key Biscayne.  Oh no…how naive I was.  So, with no race traffic to even guide me in (another big difference from a normal race day!) I did manage eventually to find the venue…on Virgina Key.  So after a brief but frustrating detour, I made it to the festival area and ran into some friendly faces…Brandon and Shenard (although I'm fairly certain I just butchered his name here…sorry buddy!!).  A few minutes later I was finally at the BFX pit area, and life seemed good again.

Unbelievably, I put even less planning into the actual race coverage itself.  Despite priding myself as a pretty good planner, I am known to kind of wing-it at times…at surprising times to many.  Getting there after the start, though…and later than I'd hoped…meant it was dark already when I was ready to get out and do some “covering'. 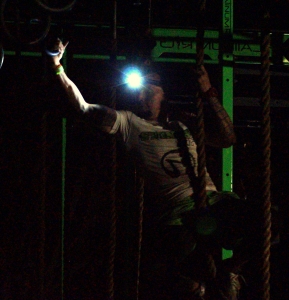 I did, however, put planning time into my supply packing.  Although I only had around three total hours to plan, shop and pack for this little outing.  So I used the rule of thumb…one minute of planning/packing for each hour of race time.  To be honest, I'm not sure where that rule came from but…oh well.  One thing I didn't to have with me was a course map.  So wandering more than a few hundred yards away meant I was seriously flirting with getting lost…twenty minutes into my coverage.  NOT a very auspicious start for my grand introduction to endurance racing.  Oh…there's more, though!  One thing I did remember to bring was my headlamp.  And I even thought of throwing in a large pack of extra batteries…tucked neatly and conveniently away in a side pocket of my bag!  Tucked neatly and conveniently away in the side pocket of the smaller gym bag that I had to switch out to a larger bag.  Now they were neatly and conveniently sitting at home on the bed. 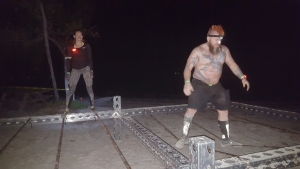 Never-the-less, I realized that the only way I would be able to see the action…and not get lost…was to follow the course (which, thank the OCR gods, had been well marked and in places specially marked with reflective tape…thanks, Margaret!!).  So that's what I did.  Follow the course flags with my three well-used headlamp batteries, my phone/camera (with the black tape replacing the newly broken camera lens cover), my trusty Gatorade and a picture of the course map from the Mud Run Guide website.  Yeah…this was going to be fun!!  Then something happened. 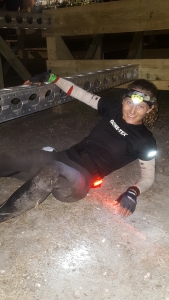 I lost my car keys!  Of course, I didn't realize it right away.  No, that would be called dropping them in the dark.  I must have been about a 1/2 mile into the course be then…switching my headlamp on only when necessary.  When I came up on the rope climb…or was it the weaver…and just as I was leaving I heard the volunteer say something to a racer who just handed her something found on the trail.  I barely heard the word ‘Hyundai'.  Instinctively checking where I had tied them (don't ask!!!) I realized they were mine.  Stunned would be a good word…like nearly falling off the edge of a cliff trail…with the instant realization that there's no way I should have been seeing those keys again.  Suddenly I knew again…the OCR gods were with me tonight…this was going to be great!!!

It wasn't until the over-under though that things finally started to gel.  Getting action photos at night without the flash was near impossible, at least for me.  Frustrated and embarrassed are words that came to mind…I wasn't exactly acing this test. But I didn't want to slow anyone up either or blind someone on an obstacle using the flash.  Particularly someone that could most likely bench press me.  Then I ran into Ivona Roy (and the “I” is pronounced as an “E”…by the way!!!).  I just asked if she would take a photo for Mud Run Guide…and she did.  Taking a few moments off from her race for a photo shoot…something she wouldn't do around 16 hours later as she flew by me near the finish line.  Sometimes I just overthink s**t……I've been told that before.  From that point on, life was good….once again. 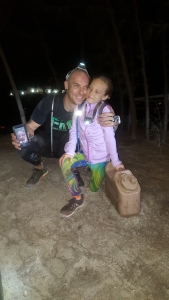 A short while later at the jerry can carry, I ran into Christian Bizzotti (whose birthday it was!) and his daughter.  Little did I realize at the time that she was on a mission this night and would end the 24-hour race having completed six laps…a total of over 30 miles.  Not bad…not bad at all!  All through the night then I continued.  Watching incredible athletes competing on a most challenging course while I had a chance to see what the course was like myself.  Asking some if they wanted to stop for a photo while we jogged along.  Some preferred to race in solitude, though…in their space.  So I was careful to respect those that did.  Later on that night, I started to understand that this was a different sort of race.  It wasn't the typical “sprint to the finish” of the other OCR races I'd participated in.  Very few (if any) would be completing the course without resting.  So a stop for a photo-op was a welcome break to many…and getting your photo on Mud Run Guide…..that wasn't such a bad thing either.

And the more I spoke with them, the more they seemed like any other racer…like regular people.  Regular people who just happened to be gifted and driven athletes.  But you wouldn't know that from talking to them.  Despite the fact that many of them lapped me as I walked through taking my time and taking photos, we could have been walking down any wooded trail or beach. At that point, many were already on their third or fourth lap on this five+ mile course…near the highest number of laps seen at a typical BFX race.  And some would go another ten laps before the 24 hours were over.  An incredible feat that almost must be experienced to appreciate truly.  The much-overused word “awesome” comes easily to mind here. 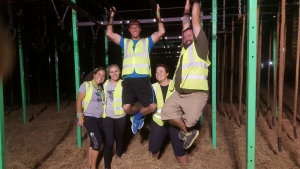 I also had plenty of time to spend with volunteers out on the course too.  Passing two or three manning each of those lonely outposts at obstacles throughout the course.  A very weird feeling to suddenly run across a couple of flashlights or glow sticks in the midst of nowhere.  And during the very early morning hours, they were indeed lonely outposts when many racers seemed to be taking pit breaks or starting to band together into small groups.  Sometimes the volunteers were all you'd see for 10-15 minutes. 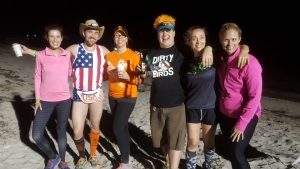 Don't forget the support crews either! Family, friends and fans who were out there….many for the entire night….providing food, drink, split times and encouragement for their racers, and seemingly all the racers they encountered.  It was just another reminder of the camaraderie of OCR and the special camaraderie among the BFX racers.  And these were the best-of-the-best BFX racers.  Those who would take the normally 8-hour BFX race to a whole new level.  For me, it was a pleasure and a privilege to be out there that night…at the inaugural BattleFrog BFX24 race.  Would I do it again?  In a heartbeat….”being on the wire is life….all the rest is just waiting”….

One interesting side note.  Somewhere along the course that night, I found out that there was a regular race Saturday morning.  What??!!  Now this was after midnight, about as far from the pit…and any chance of rest…as you could get.  Why I didn't know this is incredible….what I was going to do about it though is a whole ‘nother story…….stay tuned….