This weekend marked the return of Tough Mudder to Glen Helen Raceway in San Bernardino, and the debut of the Tough Mudder Half on Sunday.  Saturday dawned cool and very windy, requiring several of the venue tents to be reinforced. This wind would keep gusting as the day warmed up, often creating minor sandstorms across the dry hills. 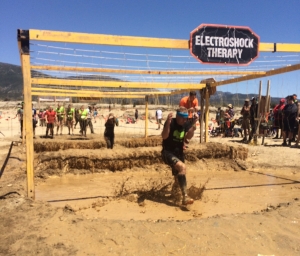 At this race, Tough Mudder had an interesting cross-promotion with the new Marvel movie “Captain America: Civil War”; the first heat of the day was provided equal numbers of Captain America, and Iron Man costumes to run in, and whichever team had 50 members cross the finish line first was awarded prizes. An interesting marketing gimmick, and it surely added to the fun to see so many costumes on the course.

The festival area had a strong presence from TM's new sponsor Merrell, who had shoes to try on and a couple of mock hills of varying surface (rock, logs, slick rock and slippery plastic) to play on.  The festival also had a slanted version of the Salmon Ladder to test athletes, a big beer garden featuring Shock Top, and several food trucks to provide sustenance to hungry Mudders. 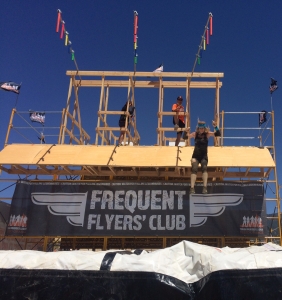 getting to the starting corral, we had to be officially warmed up by the somewhat cheesy MC. For sure, it's a personal preference, but I prefer just to get on with it.  Finally, the heat ahead of us took off, and we decided to bypass the always inspiring talk by Sean Corvelle at the start line in exchange for an earlier start as we tagged along at the end of the previous heat.  From the start corral, the course led directly up one of the bigger and steeper hills on the course, and continued along a ridge line for about a mile before dropping back down and finally reaching the first obstacle.

I'm glad the hill climb warmed us up, as the first obstacle on this course was Arctic Enema 2.0, requiring a slide into (and below thanks to the fencing) ice cold water, then a hop over a small wall into a second freezing zone before you could finally climb out and catch your breath. This is always an entertaining obstacle.  Next up was Berlin Walls, followed shortly after that with Cage Crawl where Mudders pull themselves through a long water obstacle using fencing that also provides about 6-8″ of clearance. 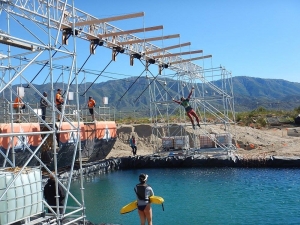 Here, there was the second lane; while first-time Mudders did Cage Crawl, the more experienced Legionnaires were funneled instead through Rain Man, an upgraded obstacle that also sprayed water on you multiple times while you floated/pulled/swam through. This made the obstacle a bit less comfortable and a little scarier.  Similarly, Liberator, a steeply slanted wall climbed with wooden pegs became Backstabber for the Legionnaires.  This version boasted only a single row of pegs instead of two parallel rows, and required significant upper body strength, or teamwork, to conquer.

A new obstacle that I was really looking forward to, the Block Ness Monster (Rolling Dice at WTM) was unfortunate out of commission and under repairs when we got to that point in the course, so we never got to play with this one. 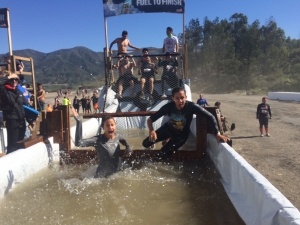 A few of the obstacles from 2015, including the infamous Cry Baby (featuring TM's version of tear gas) were nowhere to be found and have likely been retired. Others such as Pyramid Scheme (a slanted wall of slippery plastic that often takes teamwork to conquer) had a facelift; while last year's version was very steep and nearly impossible to do without help, the newer version was much less steep, and if you had stellar grips on your shoes (thank you Icebugs), you could do it solo. If you were sporting generic/bargain running shoes as many seemed to be, there were plenty of people willing to help you out.  Birth Canal, where you have to crawl under bags of heavy water, also saw a major change; last year the bags ran parallel to your course, this year they are perpendicular, which made this obstacle significantly easier.

Other favorite obstacles, such as the warped wall Everest 2.0, Funky Monkey 2.0 and my personal favorite, King of the Swingers, were unchanged.  Why mess with perfection? 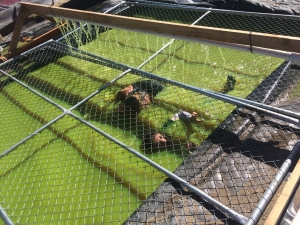 The course followed much of the 2015 course in reverse, tackling the big hills on both sides of the venue repeatedly (some might say relentlessly) for the first several miles, and hitting the relatively flat racetrack for the latter part of the race. They made great use of the venue features, with the course frequently turning unexpectedly, making the map that was released a few days before difficult to interpret and pretty close to useless. 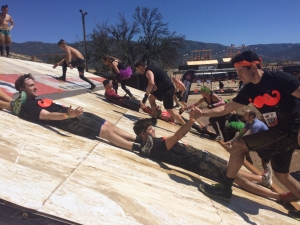 ten-ish miles and lots of great obstacles that tested participants physically and mentally, we finally came to the last split; first-time Mudders were introduced to Electroshock Therapy while Legionnaires got to take the leap at the Frequent Flyers Club – jumping to touch a baton before falling into a deeply inflated crash mat. Once they'd done this, Legionnaires had the option of crossing the finish line and grabbing their well-earned beer or looping back around to do Electroshock Therapy. Just because.  So naturally, that's what we did.

It's possible that I was simply lucky, or someone forgot to hook up an extra battery or something, but it felt to me 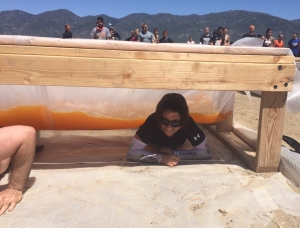 like Electroshock Therapy has backed way off the voltage they used to provide. Where before it's been extremely painful (if only for a second) and I've seen it knock people on their butts, this time through the few shocks I got were scarcely more than minor annoyances. I am curious whether this is a general observation, and whether it indicates a gentler face of Tough Mudder… You know, the kind that would make things easier by offering something like the Tough Mudder Half.

After the race, plenty of people were hanging around and socializing in the festival area, and there was a definite party atmosphere.  While I would have loved to go back on Sunday and try the TM Half, I'll have to leave that review to someone else. 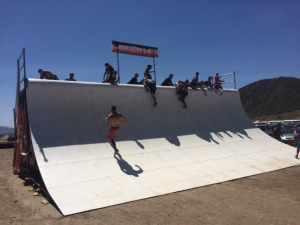 Once again, Tough Mudder came to SoCal and put on a great event. They made full use of the terrain and continue to boast some of the biggest and most fun obstacles in the industry.  Combine this with the carefully fostered atmosphere of camaraderie and teamwork, and a fun festival after-party and it's easy to see why so many Mudders keep going back again and again.