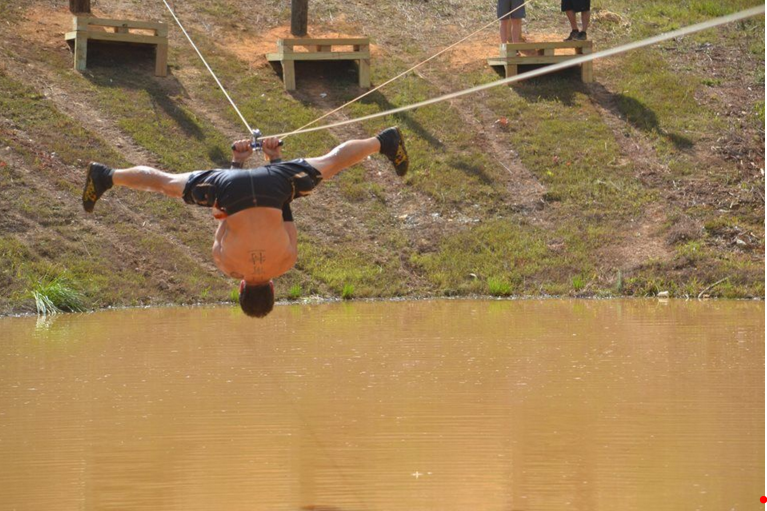 Are you sitting down? You might want to. Trust me on this one. When I reached out to this week’s victim, I was already a bit of a fan. The reputation of his smile, humor and the pack he runs with already preceded him, and I knew the first time I met him we would be friends…whether he wanted to be or not.

Luckily, he didn’t put out a restraining order, and friends we are. While he and his band of greying brothers are fairly new to our community, they have made a huge impact – and we are all grateful for it. Unless you do not like jokes about genitals. Then you might not be so grateful right now. 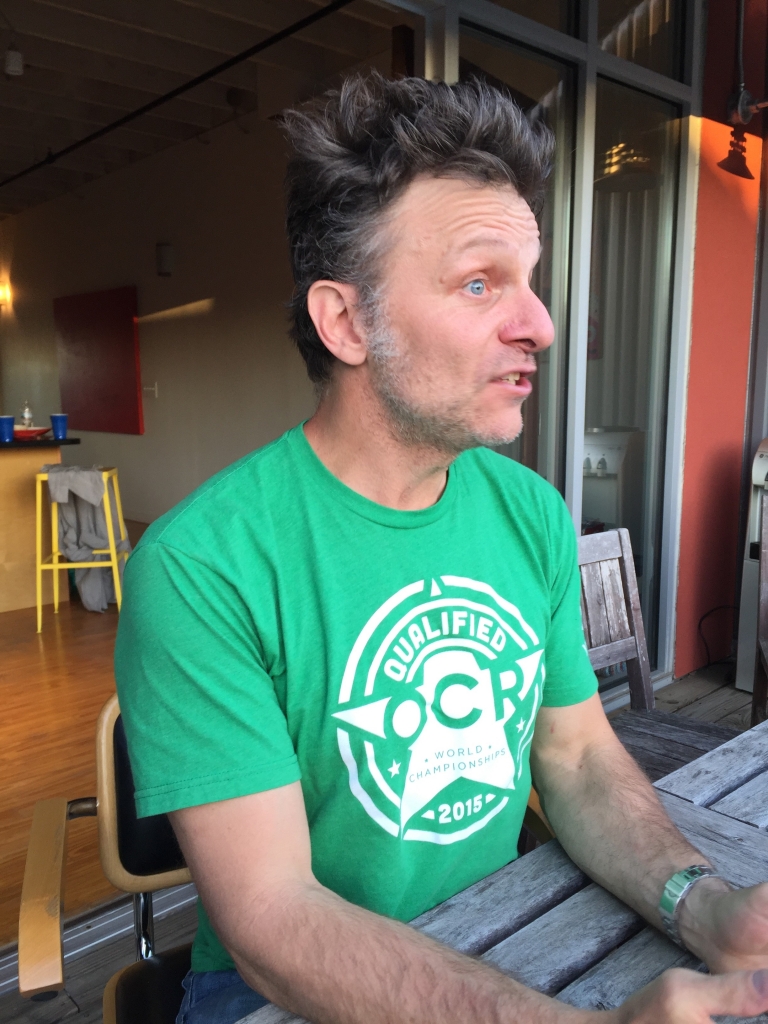 Architect. Through my design work, I separate breathtaking amounts of money from wealthy people so they can build their dream home, or 2nd/3rd/4th vacation house, or a shopping pied-à-terre, It's all caviar and Cristal…for them. Me, I’m driving a beat up Mazda 3 held together with hope, crossed fingers and OCR stickers.

BadAss Dash – Atlanta, March 2014. Out of the blue my wife says, hey, I’ve got a bogo Groupon deal for this obstacle race at Stone Mountain. Wanna do it? Mind you, I hadn’t run any sort of distance since high school. I wheezed through it with the speed of a sedated slug and the grace of Eddie the eagle. By the time we stumbled across the finish line I was hooked. There was a flyer on my car for Macon Mud Run. So, through the wonders of the modern smartphone and the interwebs, I signed up for four races while driving…being driven.

I like Icebugs and La Sportivas for my feet,

An old pair of board shorts for my seat

Unless it’s cold, nothing for the tits,

I was assimilated by the BORG….I mean GORMR – Georgia Obstacle Racers and Mud Runners – A tremendous group of people who opened my eyes to the wonderful world of OCR and swelled my Facebook stalking list to heretofore unimaginable levels.

What made you stay? 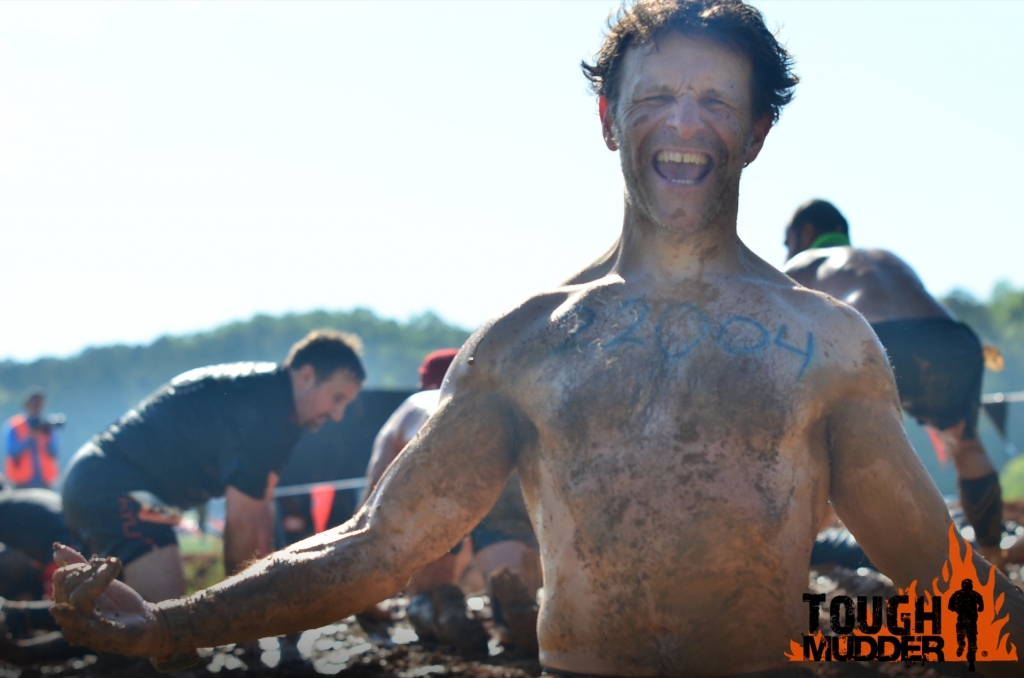 Through GORMR, I met Scott Bennett. A finer man you will not meet. And through Scott, I met Richie Taylor and Jae Lumley. These two, not so much. These three reprobates quickly became my friends. I was inspired by them, having more in commonalities of age with them than the twenty and thirtysomething racers. Anywho, we banded together (well actually I pushed, prodded, and cajoled them) to create a team for the 2015 Atlanta Green Beret Challenge.

I believe in the distant future when wise and gentle toga wearing gender-dismorphic-bigenitalia-pansexual archivists discover the great OCR codex, history will show it was Jae who came up with the name Grey Berets. As we did races leading up to that event, we became closer, tighter. They became the nasty old uncles I never had, and The Grey Berets started to become a known commodity – The idea of a team of swashbuckling old guys running OCR seemed to strike a chord in the community. So we decided to open our merry band of 4 to a wider group of men aged 50 and up, and I now have a spectacular band of brothers I am honored to call friends. There’s no leaving now. We’re like the mob. 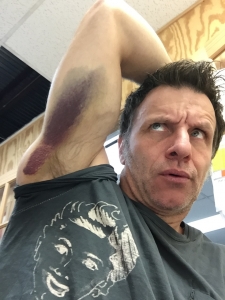 Well, it all started when I dropped trou at the biggest team tent prior to the start of the Spring 2015 Spartan Sprint, to change into my pecker pants (the fancier racers I guess call them compression pants or something technical like that). I was wearing my Marvel Comics boxer briefs, the ones with the unfortunately located green face of a sneering Hulk. This particular morning he wasn’t so angry due to the 28-degree temperature. There were lots of ladies about. Laughter ensued.

This is how legends are born.

But……if it isn’t that, the only other thing it could be are my race reviews, because it ain’t my sparkling personality and new Voltron undies. I put to words what most people are thinking during the more difficult parts of a race. That is to say, I drop more F-bombs than Samuel L. Jackson. And I possess an endless supply of genitalia euphemisms. It’s OCR community catnip, to like, half a dozen people. 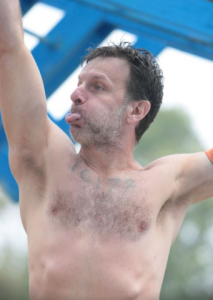 To me there are two distinct parts (though not mutually exclusive, and both get the OCR mob into a frothy frenzy) when discussing growth:

You have the view from 30,000 feet: How does the sport grow to become better known and thus introduce new people to the joy that is the pain.

You have the view from 1,000 feet: How does the sport become a sport, one that can be enjoyed by spectators and monetized for those that choose to become a professional, in the true sense of the word (Herein lies a topic that could take another 1,100 words and every known use of my favorite word. Hint: starts with an “f” ends in a “k”).

For the former, I think it’s keeping a keen focus on the vast majority of participants; the open wavers. I’m not the first to say they are the backbone of the industry from which all else is supported. At some point, everyone is going to throw up their hands and refuse to pay the ever increasing prices for something that ends up being a trail run and a food truck fest, because they can’t do a majority of the obstacles. I’m really intrigued by BattleFrog’s introduction of tiered obstacles.

For the latter, I think it is short courses and mandatory obstacle completion. If you had a chance to catch BattleFrog’s College Championships last year, you know there is no denying the viewability of that format. You get the same flavor and excitement with OCR Warrior and to some extent Broken Skull Ranch. This exciting format feeds nicely into the need to get OCR out to a vastly wider audience.

Platinum rigs by the pale moonlight.

The feel of shiny metal bling and other prizes

And yards of spandex stretched so tight

Grabbing booty to assist over many a wall

A Grey Beret gentleman to be sure

But you know some girls just aren’t so tall

So a boost on the butt is the right OCR cure

Lest you think me creepy old and dirty

We are all on the course as friends

In no way is it trying to be grabby and flirty

Danger Will Robinson! Danger! I see this as a quick way to shorten my Facebook friend list! Ah screw it, Spartan will change some other rule soon enough, and the collective OCR mob will pivot to that and forget everything I have said.

There are probably many others, but I don’t want to become Mayor Nellie of Negativetown.

Now – Ramble a little bit…tell me some things about yourself that you think everyone might want to know, or at the very least, that you want everyone to know…

I am not sure if it was possible to love this guy more than I did before we started on this interview, but…I am pretty sure I do. And you should as well. If you see him and his merry band of troublemakers out on the course, go gang hug him. Seriously… do it. But I cannot be held responsible if he tries to snuggle you. Or swear. A lot. Or both.

Special thanks to the Grey Berets who we love. Keep growing in ranks guys – you make us feel totally inadequate and we love it.