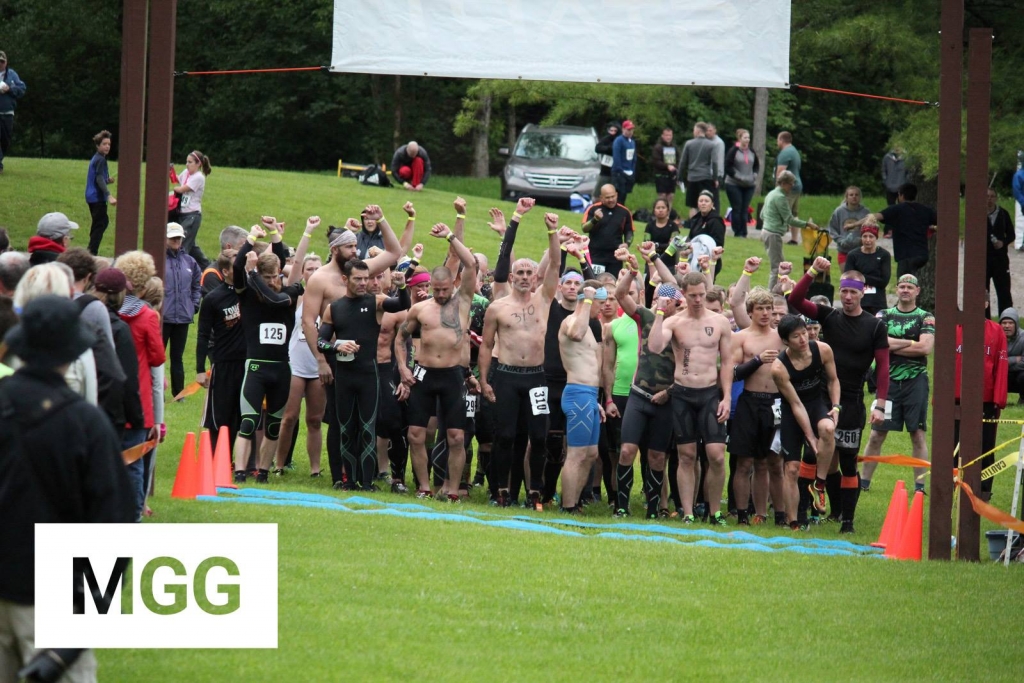 To anyone familiar with this race venue, many images immediately appear in the mind of the competitor. Oregonia Ohio is the home to Kings Domain; a 120-acre park which would normally host conferences, weddings, and leisurely hiking.  Today it was to host the venue known to many: Mud Guts and Glory.

The site of the last 2 OCR World Championships, and last year’s BattleFrog; Kings Domain hosts the Mud Guts and Glory event each year(twice in 2016).  The day began as rain poured in the early hours of the morning.  The additional challenge, as we would soon discover, was to saturate the entire course.  Never a welcome sign to anyone competing on those days.  Arriving at the venue allowed for multiple parking options with a premium spot within walking distance to the event, or the discounted lot with a short shuttle ride.  The layout of the welcome area was very straightforward with registration tents clearly marked and well-staffed with some wonderful volunteers.  I might also commend the venue on the “impulse buy” opportunity presented as the merchandise tent was located in the area where the shuttle pick up was located when the race finished.

Progressing past the registration was the common area containing team tents, vendors, main stage; and on this day, many fire barrels to help to warm all in attendance.  As common with most courses, the main event area contained a good viewing of some of the major obstacles for the course.  As difficult as it is at most venues for the spectators;  Mud Guts and Glory (MGG) provides some good viewing overall.  Unseen by the spectators were the challenges every competitor was facing in the hills and valleys of Kings Domain. 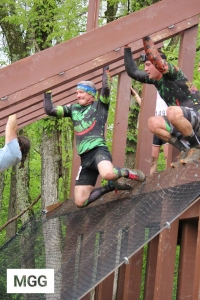 The start of our wave was a “family reunion” of sorts as MGG is also the unofficial “home course” for the race team the Crazy Mudder Muckers(CMM).  The race was also bittersweet, as the founder of CMM, Kevin Jones; was running possibly his last race at this venue.  Leaving the chilly north, Kevin is joining the BattleFrog organization, and moving to sunny Miami. The starting corral was abuzz with hugs, well-wishes, and anticipation of the challenge to come.  A sea of green and black swept over the start line to make our way through the 10k course (a 5k option is also available at this event) that was to greet us.  It was quickly apparent that the rain had taken its toll on the terrain as good footing was at a premium.  Anyone lacking the appropriate footwear was quickly faced with the equivalent of running up a literal “slippery slope”.

After a mile or so of acclimating ourselves to the terrain, the course wound us back into the spectator area.  A quick crawl under some netting took us to the first inverted wall with rope to assist.  A quick drop of the wall and onto the Irish table obstacle.  A deceivingly simple obstacle that can slow down even the best of athletes.  Past that was onto the decline/incline monkey bars-“monkey business”.  The major change this time was the absence of the water at the bottom which was replaced by a series of nets.  The change certainly changed the dynamic of the obstacle as the netting was causing issues for some who had lost their grip at some point in the trial.  Certainly a challenging obstacle, much akin to Sawtooth from the Savage Race series. 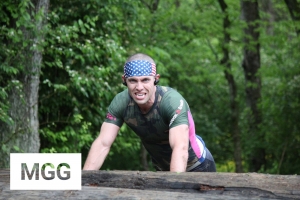 Descending from Monkey Business took the competitors through a gauntlet of over/under obstacles through a water-filled trough.  The unwelcomed feeling of being soaking wet in the chilly weather quickly made many competitors double their pace to regain their core body temperatures.  Now, soaked and cold; Castle Wall loomed overhead.  A 27 foot mind-bending monster of a stepped climbing ladder.  As much mental as physical, Castle Wall made many competitors pause as they began their ascent.

Once clearing that, it was back into woods and trails.  Flat ground came at a premium at MGG as thousands of feet of overall elevation climb was hidden in those woods.  Just as you found your way to the top of a slick mud-ridden hill, frequently we were then immediately faced with the unenviable task of having to negotiate our way back down again.  At one point, I actually used a stick to jam into the ground as I proceeded up an extremely slick hill as my fellow competitors scrambled for any hand/foothold they could find.  Branches, vines, and trees became invaluable aids to summit most of the hills. 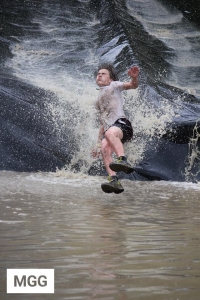 If the hills and obstacles were not enough to challenge the field; MGG also incorporated a few caries to keep things interesting.  After an arduous climb was completed, we were welcomed by a volunteer directing us to a pile of wreck backs to take on a leisurely stroll down the path.  Off we went with our new “friends” nestled uncomfortably on our shoulders.  Half way through that journey, we were also instructed to then connect our wreck backs to hoists as we then lifted them to the heavens at the mid-point of our carry.  The second carry (conveniently after another large climb) was met with a tire carry.  A task not normally terribly challenging, however; with the point in the event and the terrain, it increased the challenge exponentially.

Continuing through the picturesque park, we eventually made it to what every competitor had in their back of their minds since the start: Pinnacle Hill.  Looming before us was a monster of a hill, bordering on a cliff, of wet earth, rocks, and roots protruding from the soil.  The bottom portion had been washed out recently, and a log ladder had been constructed to help the transition.  Once that was passed, it was then our task to navigate up the nearly 90-degree ascent of Pinnacle Hill.  Ropes attached at the top of this monster cascaded to the bottom and provided the only way up the hill.  Not nearly enough handholds to help the ascent; so the rope was the only option.  Dodging rocks kicked up by the other competitors kept everyone wary, and looking up only reminded you of the remainder of the distance remaining. 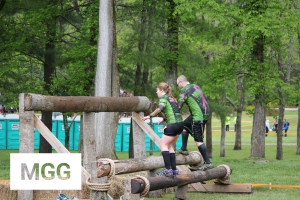 Once eclipsing this feat, we were treated to a now calf-cramping (very rare) flat section of course.  Rounding a turn at the top of this hill took us to ever kids dream, and every adults worst nightmare; the slide at King’s domain.  Appearing innocent enough, it was just an easy slide to the bottom, right?  If that were only true.  The beginning started slowly enough, however as the competitors reached the halfway point in the slide, the speed exponentially increased(some reported traveling 20-30+mph).  As we raced down the slick tarp,  water splashed up into your face, nearly blinding us.  After the barrage of water in your face, it was then for the briefest of moments; the sensation of flight.  With a triumphant blast, we were airborne; crashing uncontrollably into the pool.  A large pool resides at the bottom to catch everyone after their trip down.    The feeling of relief at the bottom was more than worth it for most.

The finish line looming nearby, a renewed vigor came over the competitors.  A smaller sternum checker and 2 inverted walls were the only impediments to glory.  After dropping off the back of the last wall, I rounded the last turn, removed my jersey mid-run; and ran triumphantly with it overhead.  Signaling that my journey for the day had culminated in that ever welcome beep of the timing mats at the finish.  After being adorned with my medal, I knelt to reflect on the challenge of the day, and the welcome hugs from teammates who had also tamed the beast that is Mud Guts and Glory.

Use discount code MUDRUNGUIDE for $10 off your Mud Guts and Glory registration!