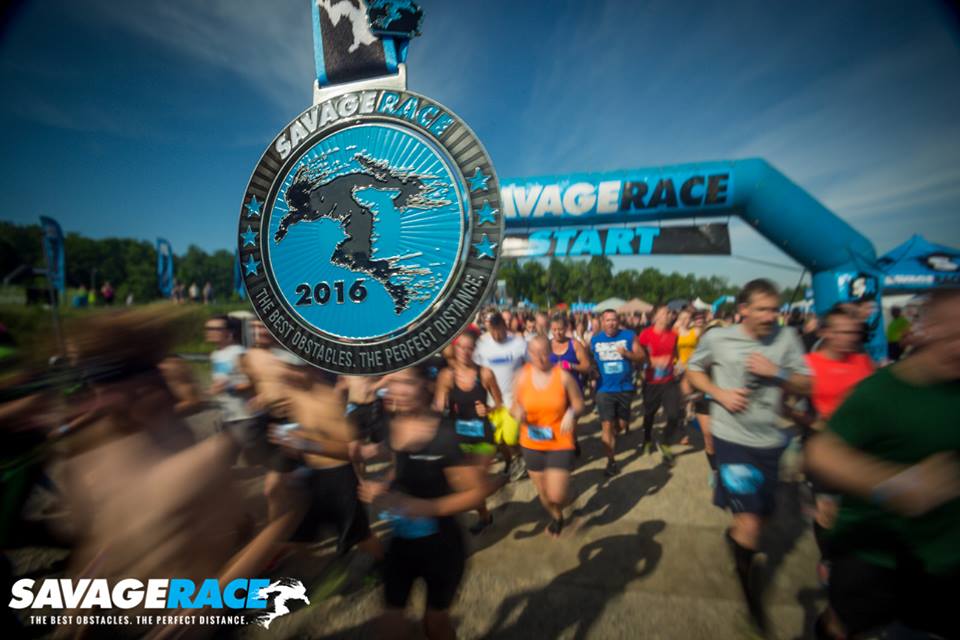 What possible use could there be for a ski hill in summer…….?

Mad River Mountain: Zanesfield Ohio was the sight for this year’s Savage Race Ohio.  The event has been held at this location for some years, and the success of the Savage series would not disappoint.

A hot morning brought the competitors to the Mad River Mountain ski facility in Zanesfield, Ohio (a short distance Northwest of Columbus).  Serene farmlands entailed the drive up to the location in the rural area; with its unassuming lack of hills?  Rounding the last turn unveiled where they were hiding, and Savage Race found them. 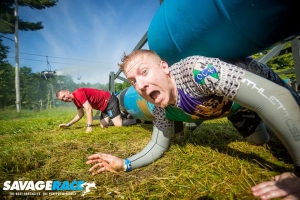 A slight change from last year’s venue as a fire in the offseason engulfed the lodge at the main event area; moving the staging point to a different location.  Parking was just across the street from the main area in a large field that was well managed by the volunteers directing everyone into a marching order of parked cars.  The change in event areas was the first thing that was different from last year’s event.  Unfortunately, the main event area was in a gravel-strewn area that may have been a parking lot at some point, with scattered grass growing amongst the stones.  This made things a little cramped as areas to stretch and warm up were limited to the gravel lot.

The space that was there was used to its maximum potential, though; with the main DJ stage, merchandise tent, bag drop, etc.

One of the greatest things about this sport is the comradery of the competitors.  Once I made my way through registration, I was greeted by old friends and fellow racers.  Any fear or apprehension about competing is quickly dashed when you get to see those whom you have suffered/competed with in the past show up with a handshake and a hug. 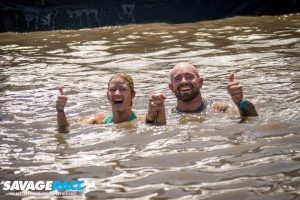 Once we had moved past all the catching up and pleasantries, it was time to get Savage!  The race promotors do a good job to get the field ready to run.  The opening “ceremony” at every Savage event entails getting everyone involved right from the beginning.  From the locking arms /swaying to the whole crowd simultaneously adding the “oh-ah's”, to the crowd surfing of some of the competitors; Savage Race gets you ready to compete.

Once all the fanfare subsided, and the competitors were lined back up; it was time to GET SAVAGE.  In a shot we were off;  the sound of dozens of GPS watches beeping in unison as the group took off.  A quick jog back through the gravel lot,  an abrupt turn, and we were quickly faced with Mad River Mountain looming before us.  In winter, as skiers sped their way down the snowy slope; us, in summer, were about to discover what it was like to do that in reverse; minus the snow.  A long/arduous sprint up the first of the many hills to come.  Long ago, I learned to stop looking up during these climbs.  Nothing can be more disheartening than being out of gas and look up, only to see many more yards to the top.  I just focus on each step knowing that the leg burning churn uphill always has to end. 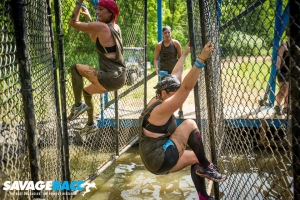 The one benefit of running up and down a ski mountain all day is the availability of the snowmakers.  What possible purpose could they offer in the summer?  The overheating-savings mist produced by these devices proved invaluable during the ascents/descents of the course.  You ultimately found yourself in a quasi/evil shampoo commercial designed by the Savage Race staff.  Mud, rinse repeat.

Last year at this event, I was plagued by a lack of proper hydration combined with extreme heat.  In the back of my mind, the obstacles I had failed were ever present.  As much mental as physical; OCR events can always find a way to worm unconfident thoughts into your head.  Doing my best to shake those thoughts off, I pushed on.  This year, I had planned/prepared much more.  Proper hydration was first on the list followed by nutrition.  Overall, as the day progressed; I felt much better than my effort last year. 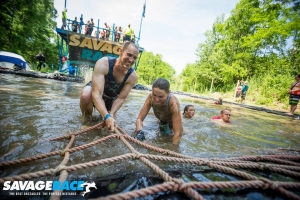 Savage not wanting to grant anyone any recovery time, felt the need to place a pair of 8-foot walls at the top of one of the first few hills.  Nothing like climbing a ski hill and eclipsing a giant wall to begin your day!  The day was fairly warm, so a slight respite was found in the stretch of course that weaved us through the woods.  The trails were well laid out, and not overly muddy to create any major issues for the competitors.  Emerging from the woods led us to a few more obstacles, including a crawl.  Once we had our fil of the uphill, it was time to return to baseline.

The downhill was just as treacherous as the uphill, as the ground was uneven and occasionally wet from the misters present.  Hopping down the hill led us to a “crown favorite”, Shriveled Richard.  This obstacle can have a profound mental and physical impact on the competitors.  During the heat of the day, however; it proved to be somewhat of a welcome relief to cool the body down.  After slowly regaining our body temperatures, and extremities,; we headed across the street to the other section of the course.

Across the street from the hill, the terrain was flat.  Well cleared and marked, the path wound us in/out of the forested area adjacent to the main event area.  Quickly we were visited by the parallel bars and the climbing wall.  Both challenging in their rite, they were spaced well as not to have too long of the stretches of running not broken up by an obstacle.  A new obstacle for Savage this year was the fence climb.  Sections of chain link fence on panels suspended over water.  These panels were also, only attached at the top, allowing them to swing freely, adding to the challenge. 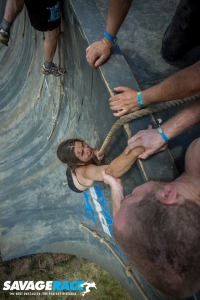 Not long after this was wheel world.  An interesting play on a piece of children’s playground equipment emerged from around a corner.  Many approaches were taken to this obstacle, as there are multiple ways to complete it.  A unique/fun obstacle that Savage brought on board last year.  As with the hill, the course then led us back into the woods.  Weaving and winding our way through the cover of the leaves, a welcome relief from the sun was granted.  If the canopy was not enough, we then had the opportunity to slog down a small stream on the property.  Relatively clean, we left the stream, just to have a muddy crawl under barbed wire.  The crawl was well executed as last year it occurred over rocky terrain, and this year was primarily mud.

With the flat ground proving too easy for the course designers, they then took us back to Mad River Mountain.  Crossing the street, we again made our way upward.  A quick beam carry took us to another signature obstacle, Sawtooth.  Sawtooth is a twisted version of monkey bars with incline and decline sections to sap the grip strength of every competitor.  This year it was not to defeat me, and I successfully navigated to the other side, avoiding the plummet into the drink.  Continuing our meander through the hills, we made our way to another strength obstacle.  Half-filled cinder blocks attached to rope were required to be pulled up the hill.  Once that was achieved, it was then necessary to carry it back down to its starting place.  Very akin to the herculean hoist in Spartan, Savage took it in a different direction, allowing the resistance of the weight and the terrain to continue the challenge.

Nearing the end, we began a rapid descent to the main event area.  With the welcome sound of the DJ stage, we found ourselves at the Savage Race version of BattleFrog’s Platinum Rig.  A combination of rings, ropes, and bars; it proved enough challenge to remind the competitors that Savage would not give up its finishing medals that easily.  Once the rig was conquered, it was onto to another Savage race signature obstacle; Colossus. 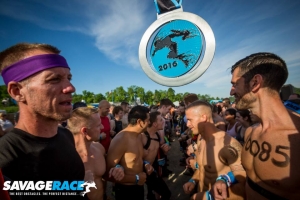 A small lead-up area led to the main ramp of the obstacle.  The lead up was fairly dry, so that helped with the rapid climb us the curved ramp.  Knotted ropes helped the competitors up the last section to the top.  A quick ladder even higher brought everyone to the slide.  A slippery dash down into the final water of the day.  Emerging from the last obstacle, the fire jump and the welcome finish line loomed.  Soaring over the fire to the welcoming beep of the timing mats.

A well-executed finishing area had the medals awarded, and t-shirts dispersed just after the finish.  Adjacent to the finishing corral was also the tent to check the current results.  Overall, Savage Race put on another quality event.  From the info in the OCR world, this venue is one of the most challenging locations that Savage puts on an event.  Well planned, and well-executed; Savage Race has put on another gem!

Have you done a Savage Race?  Leave your own Savage Race review and feedback

Use discount code MRG5 for $5 off your Savage Race registration!