For years, the obstacle racing industry has talked about the short course time and time again. The most famous and vocal proponent of the concept has been OCR racer Hobie Call. His vision of the sport in the future is a short course laid out in a stadium where people can watch all the action.  Over the weekend, at the Spartan Race Dallas Stadium Race after the main heats were complete a version of that vision was realized. The IORF revealed a standard stadium format course, in conjunction with USA Pentathlon and delivered by Spartan Race.

History of the Short Course 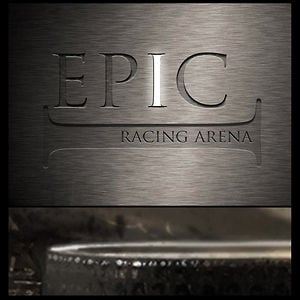 While many credit Hobie Call with the short course concept in the sport of OCR, there was another who first proposed this format even before Call. That person was Junyong Pak, John Paul Jones, and a small group of investors who first introduced the idea of a short course to the OCR community. In early 2012, Pak and crew began to roll out the idea of an obstacle race in a stadium that people could see all the action; the concept was called Epic Racing Arena. Pak already had his eye on the future as mentioned in this podcast from July 2012. Epic Racing Arena was ahead of its time and unfortunately never made it out of the development stage, but this idea opened the door for the future of short course obstacle racing.

It was in early 2013 that Hobie Call started to promote his version of a spectator friendly obstacle racing format to bring in more sponsors, athletes, and make the whole experience fast-paced and fun to watch. Call saw obstacle racing of the future as a team sport formatted very similar to cross country running. Call drew out plans for his concept even commissioning a miniature scale model of his design at his expense.

Hobie Call has continued to champion his idea and the industry is catching up. In 2014, at the Spartan Race World Championships, a short course concept was quietly tested and filmed by NBC. This was a far cry from the stadium format Call championed and instead was a short course in which participants did several laps on. All in attendance still agreed this could be “a future” of a televised version of the sport.

The internet series OCR Warrior built on the idea of a short course. Creating a head-to-head online show where two racers would take on the same course winner moving onto the next round and loser going home. The YouTube show aired for two seasons online during 2014 and 2015. Again progressing the short course format for the world to see. 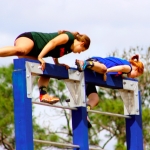 It was in 2015 that the world would first get a view of what a fast-paced short course could look like with the BattleFrog Collegiate Championships on ESPN. The 400-meter relay featured obstacle after obstacle with teams of four completing sections of the course. The show was fast paced, and the course made for television. This was the first televised version of what the sport of OCR could be moving forward. (The second season of the championships airs later this month on ESPN).

OCR Short Course of the Future 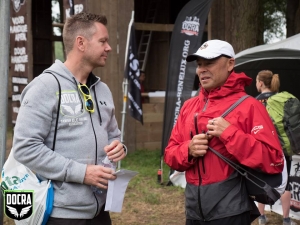 It is no secret in the obstacle racing industry that Spartan Race is pushing towards making the sport into an Olympic sport. For years, many have been working behind the scenes to make this happen. The IORF – International Obstacle Racing Federation is at the forefront of this effort. For the last couple of years, they have been working on laying the foundation of creating the “sport of obstacle racing”. Ian Adamson has been leading the change since day one recently meeting with members of the European OCR NGB's (National Governing Bodies) at the OCR European Championships and with members of other international sporting committees and federations. 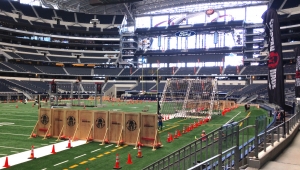 Adamson and observers from international sports got a glimpse of possibly an international games format in the standard stadium format showcased at the Spartan Race Stadium Race in Dallas. This was a first look at what could become the OCR sport of the future.
The short course showcased over the weekend was a mixture of Call's concept as well as the obstacle run as part of the military pentathlon championships which has been happening for years. This latest course is a hybrid offering the best of both concepts.  In Dallas, the obstacles were laid out like a standard running track on the Dallas Cowboys turf featuring obstacle racing staples as well as target shooting, a challenge that hasn't graced Spartan since the Utah Spartan Races before 2013. 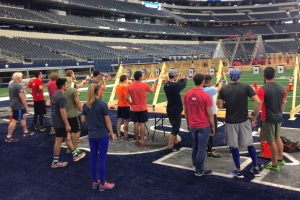 In this version, Modern Pentathlon Laser Shooting was included. This was piloted by the IORF and USA Pentathlon at the Spartan Race in Fort Carson last month, not coincidentally in Colorado Springs, the home of the United States Olympic Training Center and USA Pentathlon.

As the racers completed the fast-paced course, an announcer commentated and the leaders were followed throughout the course with video playing on the jumbotron for all to see.

One of the participants was Mud Run Guide contributor Jack Bauer who described the course as:

Knowing that the course would take only 4-5 minutes to complete, I knew I was going to be red-lining the whole time. Everyone was making riskier moves than in a normal race, whether that was sprinting to the front to gain position immediately or rolling off the top of the 25 ft cargo net recklessly to save a couple seconds going down.

The atmosphere was amazing and the setup was extremely spectator-friendly. The obstacle spacing was just right and although they could add a couple of new obstacles (rope climb or rig), I think they're definitely going in the right direction in terms of course design. I don't see any way that this wouldn't be an exciting sport that people would love in the Olympics.

As the sport of obstacle racing continues its charge towards the Olympics, the industry just might have seen into the future over the weekend with the standard stadium format. Spectators in Dallas might be looking back in 2020 saying they were the first to see what may become the Olympic format of the sport in the future.