Last night, Spartan Ultimate Team Challenge Episode 4 aired on NBC. It was all about Spartans vs. Ninjas last night with American Ninja Warrior Alums up against some of the top Spartan Racers. Advancing to the finals last night were the Sacramento Spartans, Team GRIT, and the Wedding Ringers. It was a star studded episode featuring obstacle racers Cassidy Watton and Maggi Thorne, fitness guru and author Ben Greenfield, and American Ninja Warriors Kevin Bull and Lance Pekus.

Did you catch the shoe grab from Greenfield to advance to the finals of the showdown at the slip wall between Sacramento Spartans and Team GRIT? Last night the Ninjas prevailed as the champions moving to the finals in a few weeks! Today we bring you a look inside the episode and inside the minds of some of the team captains and members from last night's episode. 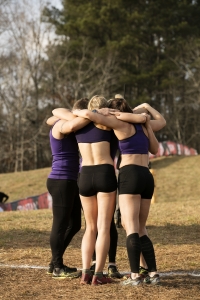 What makes this so much different than a standard Spartan Race?

This competition was in almost every way different from a normal Spartan Race. The main concern is usually yourself and how fast you can run and if you make your spear… With the team your main concern is how to work as a team and how to get your slowest member to go their fastest. The obstacles themselves take a lot of communication and with things like spear throw, you can only do so much and need to stay composed of other people aren't hitting it for example.

What makes this competition really stand out is the television, drama element. As TV goes, this was not all about the competition, it was about the teams and their stories. That came through in real life as we got to know each other and how much the competition meant to each person. It was more emotionally loaded than your average Spartan race!

The best moments with my team that you won't see on TV is workouts, meals, hours hanging out waiting to film and strategy meetings where we got to bond and just really enjoy the whole experience off camera. 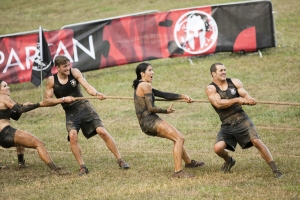 When I first sent in my application to be on the new “Spartan Race team competition show”, I literally had no idea what I was signing up for. This was a brand new show, a brand new concept, and my guess was as good as anyones as to how it was all going to play out.

Right off the bat, the first and most obvious difference between the show and a standard Spartan Race was the team aspect. I’ve ran in the open heats before and helped others, and received help in return. I’ve ran with friends before and pushed each other along the course when one of us needed an extra source of motivation. But it’s been a while, and to be honest, I’ve become pretty used to suffering alone and not having to worry about anyone but myself when out on the course. I was definitely going to be a bit out of my element trying to lead a team.

The course itself was only about a mile long, but every obstacle comes one after another. There is no time to get your running feet under you and slow your heart rate at all. In terms of difficulty, if the obstacles are easier or harder than obstacles in a normal Spartan Race, I’d say they are pretty hard to compare. There really weren’t any obstacles that you either could or could not do. If someone isn’t able to do monkey bars in a standard race, chances are no matter how many times they try, they likely won’t be able to get across the multi-bar without more practice and training. All the obstacles on the show were more on the side of “grit it out til you finish”. You and your teammates can get through it, it’s just a matter of what technique you use, playing to your strengths, and moving efficiently to not make careless but costly mistakes.

The most challenging obstacles were definitely the Slip Wall, which if you’ve watched the show at all up until this point you could probably figure out, and the Log Traverse. The Slip Wall was just unlike anything you’ve ever encountered before in a standard race. I remember seeing it for the first time with my teammates, and thinking that we were going to run up the wall as our strategy, and if one or two of us needed some help, whoever was at the top could just reach down and give a helping hand. Then we saw some teams in action and were quickly back to the drawing board. Also, I’m not sure if people realize this or not, but many times the Slip Wall took as long as the rest of the course leading up to it! The Log Traverse was also really tough. I’m convinced they haven’t put much focus on it yet so that they’re able to keep the episodes fresh as they move forward in the season.

The atmosphere between the two is a funny comparison. It is such a unique experience being “on set” rather than just at the venue before and after the race. I will say though, that the feelings experienced when the sound of the horn goes off on the starting line, the highs and lows you experience during the race, crossing that finish line, and even cheering on fellow racers, are all the same no matter on the show, or at a Super in Austin, Texas. The emotions crossing the finish line, the sense of accomplishment, the relief, the adrenaline, was all very much the same, but maybe even intensified because you have this team that was there with you every step of the way, knowing exactly what you are going through, and are feeling the exact same emotions when they cross that finish line with you.

I think that although this competition is very different from a standard Spartan Race, they still seemed to kind of blend the two worlds that really make up the OCR community. They have a lot of these athletes that have inspiring background storys, competing with a prosthetic leg, losing 100+ pounds, overcoming addiction, etc., and honestly they didn’t have to go out searching for these stories. These are the people that make up this community. It seems like we’re all a bunch of misfits that overcame adversity and found this random sport somewhere along the way. And then it combines these stories with real competition, elite Spartan Racers, trying to be the first to cross that finish line.

I really enjoyed my experience on the show, and I actually think it’s helped me tweak my training for the regular Spartan Race season this year.

What made this so much different than a standard Spartan Race?

The level of teamwork and communication required to complete the obstacles, which in themselves were monsters. The obstacles look challenging on TV, but they are even harder than they look, heavy, a degree of danger with the height or weight involved in some and you are just gasssssed from sprinting the race!

The teammwork side of it stands out along with the athletes they chose. I loved seeing families, farmers, co-wokers, etc uniting on this back breaking course because pure athleticism doesn't guarantee victory. You HAVE to work as one under intense circumstances and have the communication in place to modify your game plan if it's failing in order to come together and find success.

Tell us about a moment with your team we won't see on television.

We spent ALOT of time together as a team when we weren't filming. We felt it was so important to find out each other's “why's” of wanting to be involved in the show, get to know our backgrounds and openly discussed our strengths and weakness's. We trained together, eat together and had fun together. Ultimately I feel this gave us and edge. 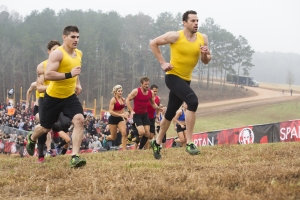 This course was bigger in every sense of the word than a typical spartan race. The rope was much taller…afterall, you have to fit five people on the rope all at the same time.The herc hoist was massive, and enormous box weighing hundreds of pounds that required five people to pull it up. The wall the dreaded slippery wall was higher than any wall I have ever seen in any race and you just couldn't get over it yourself. I believe I saw perhaps a couple people who were present at the event somehow clammer to the top of the wall like a tiny spider monkey but I swear they must have been professional rock climbers because it was literally impossible for nearly anyone to make it up this thing. So everything was just bigger, more epic, more heavy, taller, than the average Spartan Race.

The moment with our team that you won't see on television… I can tell you that when we finished one race we wound up going out and getting beer and burgers at the Vortex Bar and Grill in Atlanta for what can best be described as heart attack burgers something I am not typically known to do.

We were all so exhausted, so dirty, so muddy so exhausted all we wanted was the craziest orgy for our tastebuds on the face of the planet and the actual burger that I witnessed my wife eat, my tiny little wife Jesse eat was the coronary bypass – which included 2 bacon grilled cheese sandwiches as the buns. Total ingredients include: 4 slices of white bread, 8-oz. of ground sirloin, 10 slices of American cheese, one fried egg, 9 strips of bacon and 4-oz. of mayonnaise. Served with 10-oz. of spuds topped with 6-oz. of Cheesy-Cheese Goo, sprinkled with bacon bits. Estimated Calories (w/side): 3,707. She also added peanut butter to her burger.

That is actually their lowest calorie bypass burger. If you get a chance to visit the Vortex Bar and Grill after a Spartan Race in Atlanta, do it and eat up! 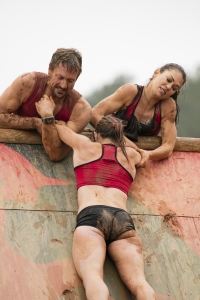 What made this so much different than a standard Spartan Race?

The Spartan Ultimate Team Challenge is so different from Spartan Races in the elite heat because we are never running as a team unless we are at the Texas team race. We are generally individually competing. It was so great to be a part of such an amazing team and event. The production and obstacles were so insane and intense!!!

What made this really stand out, and how do the two translate to each other?

Hands down the obstacles!!' They were so well made and huge!!! So amazing!! These two races translate to the most powerful and important concept of Spartan: the strong, powerful and such supportive family community of spartan!

Tell us about a moment with your team we won't see on television.

We left it all out in the course! Goofy, passionate, strong willed was all out there…. You may not see Stephen swatting with me I his arms! What a stellar team!!! I would do this again in a heart beat!!!

Tune in next week as six more teams battle it out on NBC Thursday Night at 9pm ET.