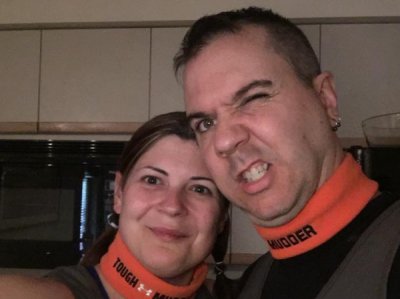 This was mine and hub’s second year of tackling the course at Tough Mudder in Whistler, B.C. Last year we went into this mostly unprepared and paid for it by being sore for many days afterwards. The bruising last year was epic, and although I was proud of my bruises, I wanted to see if I could be better on course this year.

The biggest concern we had going into this, was the weather. It was supposed to be chilly and pour rain the entire time, and that worried us. I have run in the rain but I was worried about my safety and the safety of my husband on the obstacles. During the weeks leading up to the race this year, we were in the midst of bathroom renovations, and could not take advantage of our home gym. I was nervous. Once we got on course that was a different story.

We were aiming to go with the VanCityOCR team, but due to the possible poor weather and not being able to coordinate meeting times properly, hubs and I took off on our own as Team Fick.

What Tough Mudder did well this year:

The new obstacles were present on course including King of Swingers, Rain Man, Pyramid Scheme (a favorite of hubs and mine), and Frequent Flyer’s Club. I was excited to see that we were getting new obstacles as you want something fresh and new when doing a race.

I also thought that this year overall the participants were friendlier and more excited to be there. I could feel the energy when hubs and I checked in to get our bibs (which were super-fast and painless).

We decided after last year’s walk up and down to the course that we would pay for the premium parking this year – that paid off big time. We were able to park super close to the start of the course, and our friends that came along were able to drop us off, see us do a few obstacles and then drive back into town for a bit while they waited for us to finish.

The course was also well laid out – it went in the absolute reverse of last year, so we got a completely different view of the mountain and the obstacles in general. It was neat going the opposite way around this year.

My favorite obstacles this year:

Pyramid scheme was a favorite this year. You had to work as a team and build a wall of people (like a ladder) to make it to the top. The wall was slippery and there was a tiny bit of a wait to climb up, but everyone on this wall was willing to help even once they got to the top. This obstacle to me embodied the spirit of Tough Mudder as it is not a race, but a challenge.

Rain Main – I do believe initially they were supposed to drip water on your face as you did the cage crawl (and I am glad that they didn’t). Having never done this obstacle before, I took the novice route and I enjoyed it. The water was a bit cold but I went through it like a champ. If this comes back next year, I will totally do it again.

With King of Swingers, the only thing that scared me besides my fear of heights is the shakiness of the platform you had to climb up on to get to the swinging bar. I felt very nervous doing this one and I ended up just jumping in the water.
Hero Carry – last year I couldn’t even fathom getting my husband on my shoulders for this one. This year, after some grunting, I was able to carry him on my back for 12 seconds. I felt very good about myself here, as the hard work and training done throughout the year really paid off.

Arctic Enema – the water was not a weird blue color this year. On the top of the slide before going down, I met a rather nice woman who gave me a bit of a pep talk (as this obstacle sucked for me last year), and I think I conquered it quicker this year. Bonus points for the volunteers pouring super huge bags of ice into the water as I was sliding into it. I think I felt my heart stop and it was damn cold but I think I liked it better this year.

What Tough Mudder didn’t do well this year:

Lack of event photographers – I always love getting the official race pictures, even though we had friends that took on course pictures for us. I maybe saw 2 photographers the whole time on course. They were not easily identified. As well, this year hubs maybe got 2 pictures of himself, but none of us doing any of the obstacles. We noted at Pyramid scheme there were pictures of the people in front of us, and then behind us, but not us. That was disappointing. Friends of mine that did the course this year also commented on the lack of photographers – Tough Mudder needs to step up their game on this.

Smaller Mudder Village – last years was much bigger. I am not just talking merchandise, but in terms of proper food vendors and areas to hang out in. Last year our spectators were able to buy at least coffee and food onsite, this year there was nothing. There were a few vendors giving out samples but our friends had to drive back down to the village in order to eat. This is a downer, as if we hadn’t paid for premium parking it would have been a pain for them to go down the mountain and come back. I am hoping more thought is put into this next year. There needs to be a good mix of food vendors.

Lochness Monster was not operational – I was looking forward to this obstacle the most. As we were running the course we saw it in pieces behind some yellow caution tape. I am not sure what happened with the building of the obstacle, so to see it on the course map and not get to do it was a disappointment. I hear for the Tough Mudder half course the weekend after it was fully ready to go. Please Tough Mudder don’t advertise an obstacle for the course if you can’t have it ready.

Lack of spectator spots – last year there were many more spots for friends and family to see you do the obstacles. This year, there was a spot near the beginning and at the end. Our friends took what pictures they could, however, they both commented that last year they got to see more. I am not sure what happened with this, but Tough Mudder as a company needs to think about not only the mudders on course but those that are out there to see their friends and family. I know that it takes a great deal of time and effort to plan a course, but if you want us to pay for spectator’s passes, please give them more than a couple of obstacles to see us at.

To be fair, there was a decent mix of good and bad that happened this year. Both hubs and I were able to complete the course safely without too many bruises. I am hoping for our third year in 2017, that we come back to an even more amazing course with better obstacles and more to see and do for our friends. I am excited to run this course again next year, and can’t wait to see what the future holds. Each year we do this course, we become stronger as a team and as individual competitors.