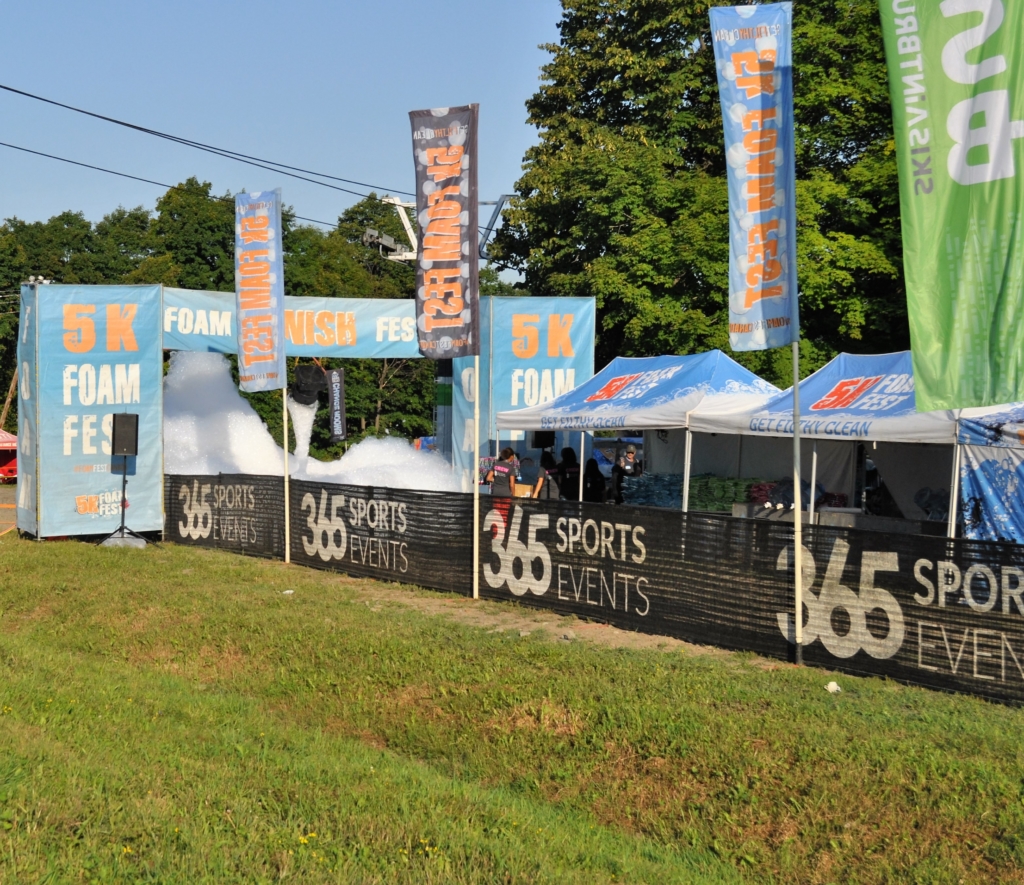 Every now and again we have to participate in the ‘fun’ events to find our inner child. We decided to head to the south shore a few hours from our home to 5K Foam Fest Canada to bring in the fun for the holiday weekend. While the US version of the event has come and gone the Canada series continues to hold strong.

5K Foam Fest was held at the St. Bruno Ski Resort in St. Bruno de Montarville, Quebec. This resort has easy access to the local highway and has an elevation of approx. 525 feet spread out over 50 acres.

Regular emails and online access kept racers informed right up to the race day. Registration was quick and easy online and the average rate was $52.00 before tax for a solo racer. Parking was an additional $10.00 and was well located just at the base of the village within walking distance. Volunteers were on site to assist with directing traffic reducing any flow issues and keeping the area free of congestion.

For accommodations, we chose to stay in downtown Montreal the night before and that left us a short ½ hr drive to the mountain the next morning.

We had been advised to arrive about 1 hour before race time (as per usual) and we were pleasantly surprised that there was only a short line up for race kit pick up (race bib, pins and tattoo) and to drop off our signed waivers. Volunteers were easily identifiable and were fairly well informed as to the timings and suggested that we could race every 15 minutes. 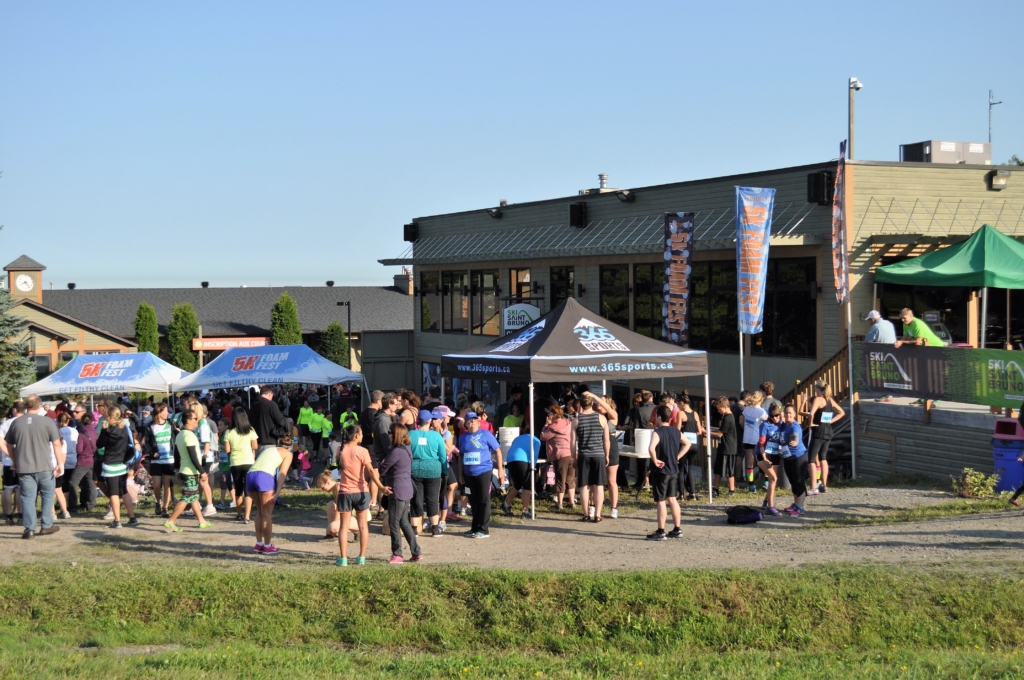 Knowing that we could race early we headed straight to the start line and only had another 5-7 minutes to wait until the next heat was released. The MC kept the crowd motivated and the foam continued to build at the start line while children and adults alike played in the foamy goodness.

This was a +/- 5 KM course and began with a slight climb up the first slope. We then headed sideways along the hillside towards a small fenced ‘under’ and then onto our first inflatable foam ‘obstacle’. It was a good location near the base of the mountain for spectators to begin getting some action photos as we continued along the mountainside and began to snake our way vertically and then horizontally until reaching the apex. The views were stunning of the small town, with Montreal looming off in the distance. Throughout the mountainside there were inflatable slides, tire crossings, lily pads, cargo climbs, mud crawls under wire, and some of their well-known obstacles like the human car wash that soaks you with foamy fun and the giant inflatable slides that tower over you as you approach with glee. Just the climb up the small enclosed ladder towards the massive slide gets your heart racing in sheer anticipation of the fantastic descent that awaits you.

As we raced down the slide and into the soapy water pit, you can’t help but grin as you stumble out and race off towards your next challenge. Even at the top of the mountain there was music to keep you motivated and some great inflatables, a nice touch when normally you only get the blow up activities near base camp. A few more slides and then down the hillside and loop back towards another smaller set of slides where the Zoom photographer waited to catch you at just the right moment. It is worth mentioning that the trails were really well marked leaving no room for error or interpretation. 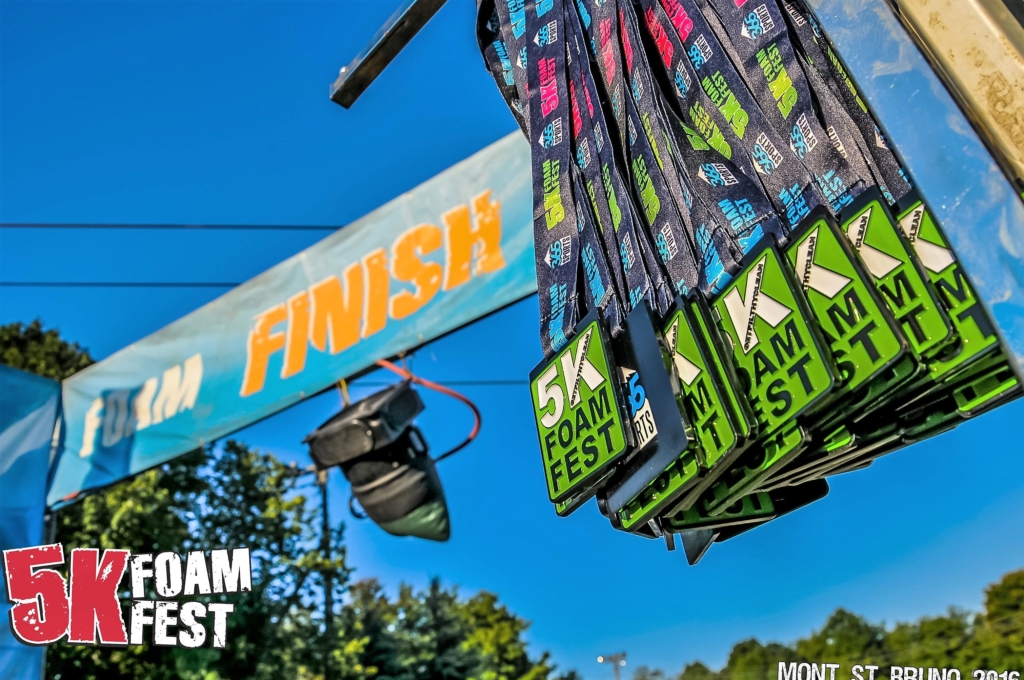 This was a spectator friendly event with ample areas to view the excitement at the start/finish lines, and Chapmans was there to provide racers with a tasty frozen treat.

Water stations were available along the course and even a port-o-pottie was available near the mid-way point that made it all the more enjoyable for those that had over-hydrated the night before!

The finish line looped nicely back at the base of the mountain and gave another excellent location for friends and family to take some additional shots and meet their families for a final photo.

The medal received by all finishers was different from the US version and popped in pink, green or blue. Each finisher received their choice of a Foam Fest towel again able to choose from green or blue.  It was nice to get something other than a t-shirt and it seemed well received by everyone.

This is a family-friendly, un-timed event.

A big thanks to the volunteers who were EVERYWHERE and kept racers on course, hydrated and motivated from start to finish. 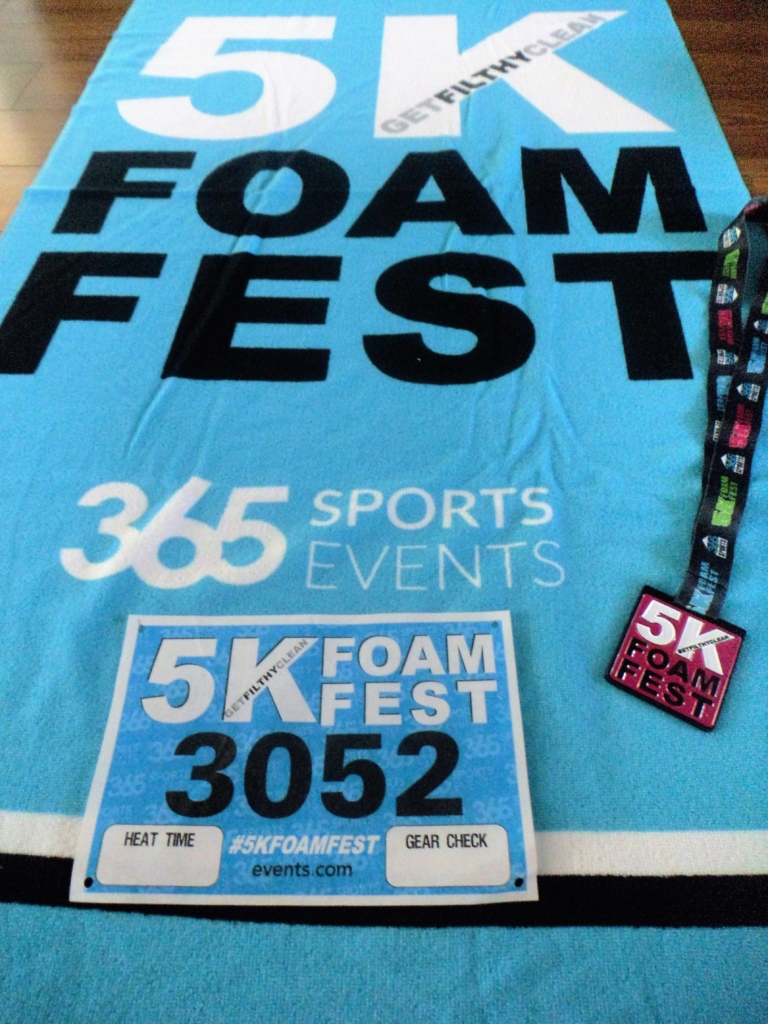 Thank you to Jesse Fulton and the 365Group team! Well done!