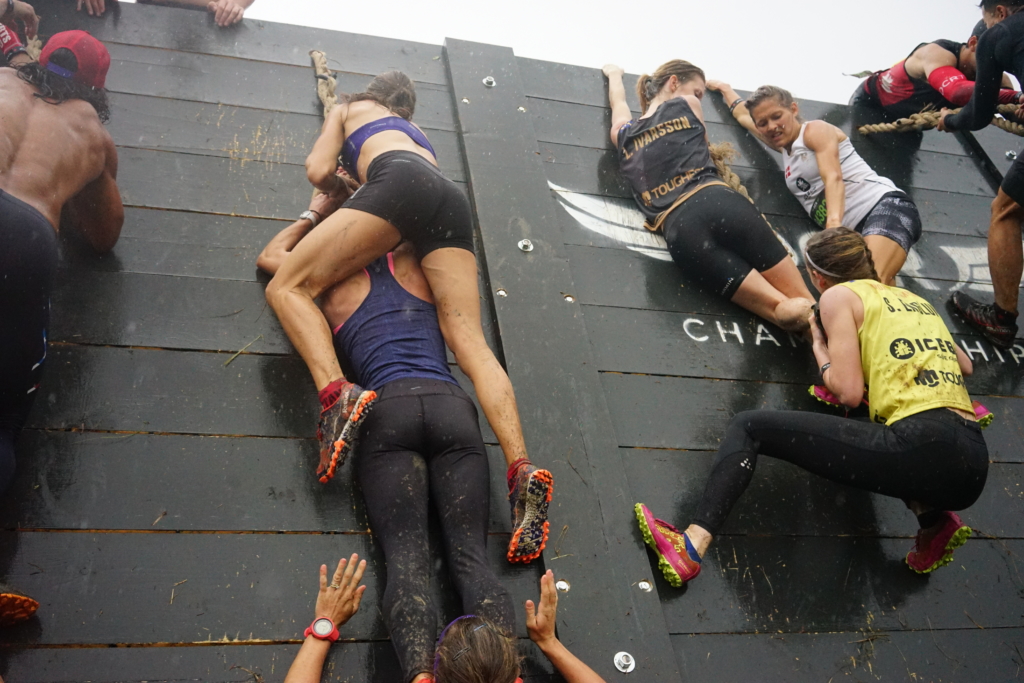 The OCR World Championships Team Race took place for the second year in a row. Last year the team race was a highlight of the weekend with athletes racing both for their country as well as athletes banding together to create international teams. The athletes set out in Men's Teams, Women's Teams, and Co-Ed teams in both the Pro and Open Divisions.

The team race was run in a relay format split into first a running second, followed by Platinum Rig for the obstacle leg, then kicked it off to nearly a mile long Wreck Bage Carry, then into a gauntlet of obstacles for the Obstacle Specialist, finishing with the team running all working together to get over the Tall Ramp Wall into the finish. 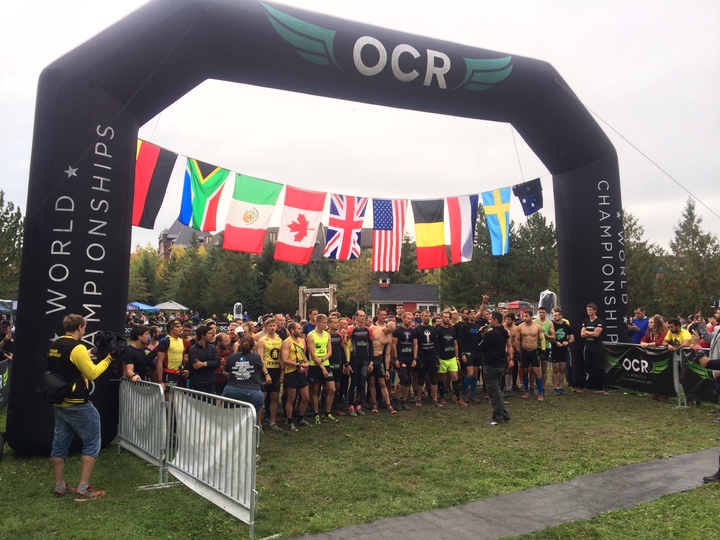 Adrian Bijanada briefs the athletes on the rules of the team race prior to the start. As he began his speech the rain started to roll into Blue Mountain. 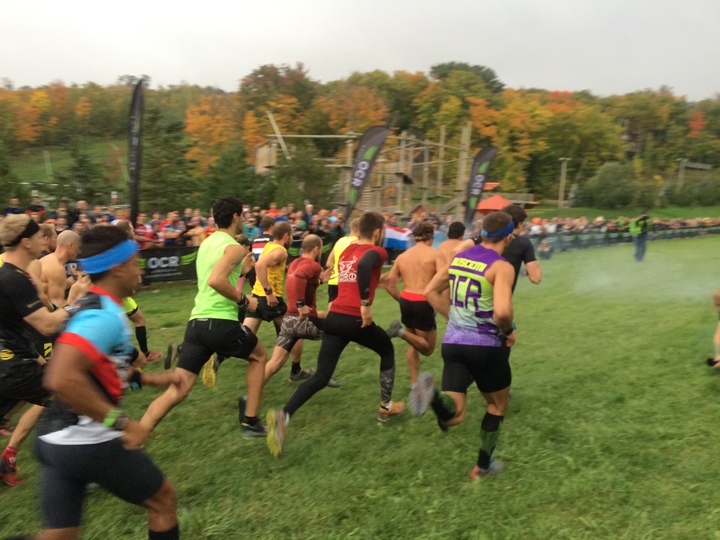 Men's Team Pro Heat heads out onto the course with the runners heading out for the first leg of the race. The rain started to poor as the men took to the trails. 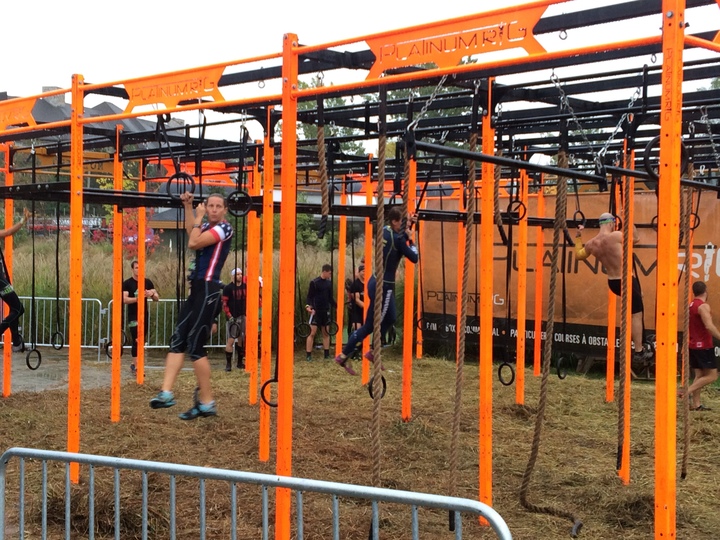 Obstacle Specialist athletes take on the Platinum Rig in the rain. Their grip strength was tested to the max today on the slippery obstacles. 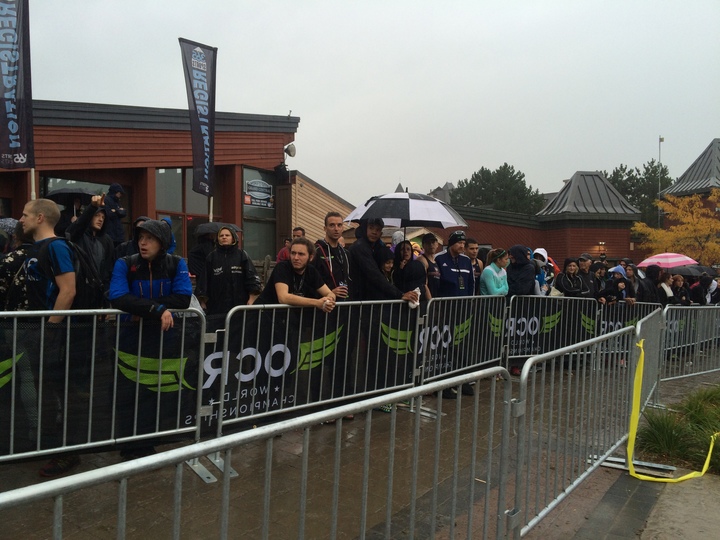 Friends, Family, and more watch the athletes as they come into the village area during the team race. The rain did not stop the excitement of the day. 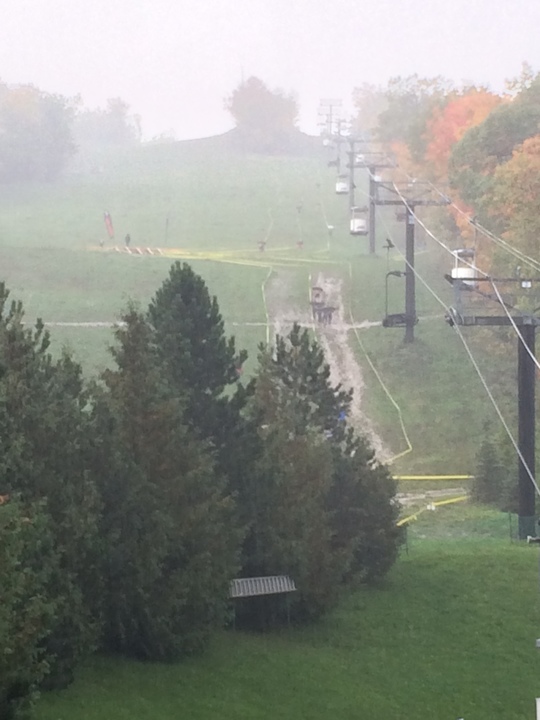 The Wreck Bag Carry quickly became a muddy mess this morning with torrential rain blanketing the entire mountain. As the rain moved in the course became slick and slippery. 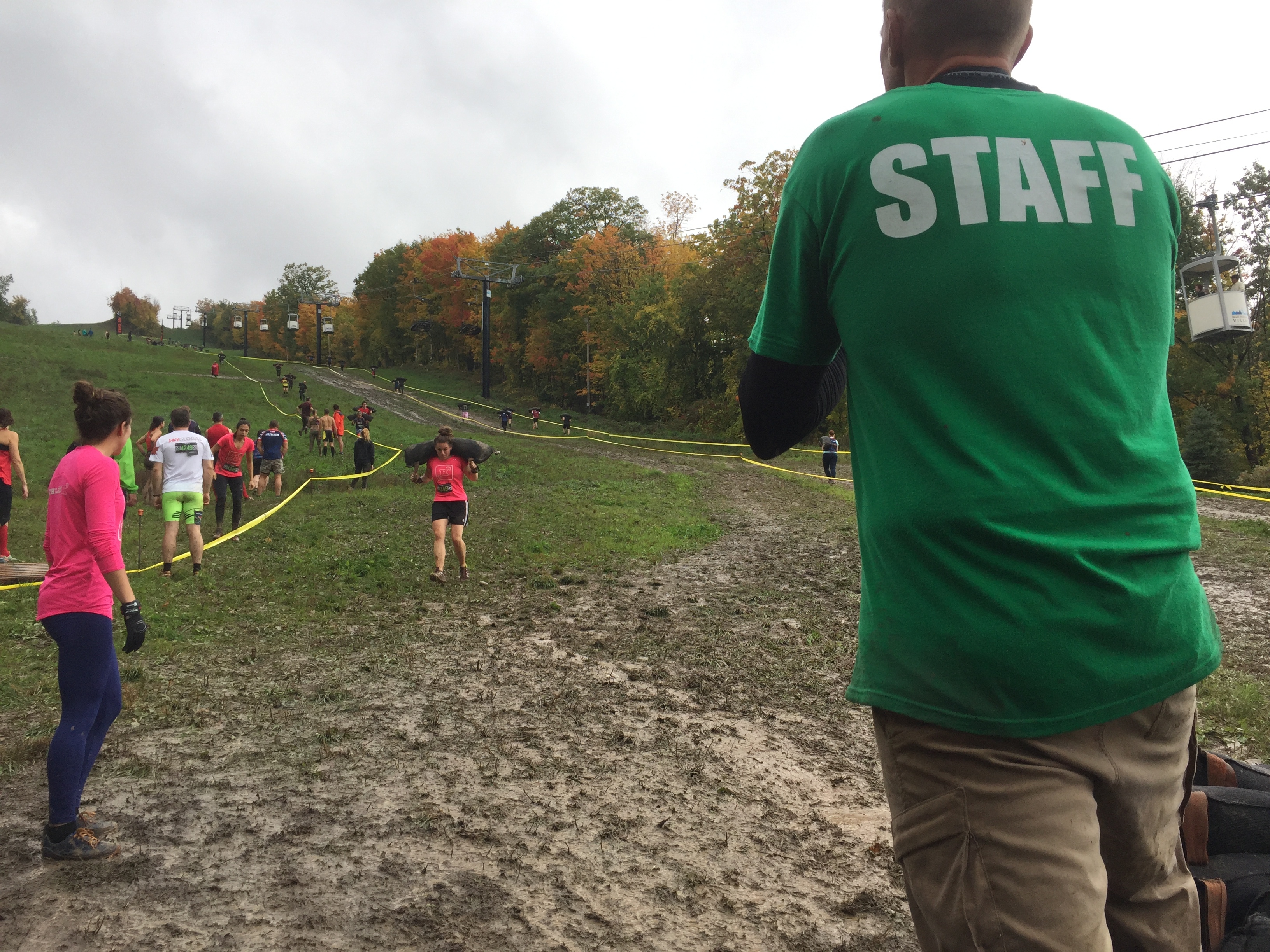 Volunteers cheer on competitors as they reach the end of the nearly mile long Wreck Bag Carry in one of the later open heats throughout the morning after the rain subsided. The rain subsided as the open racers were out on course however not before creating a slick muddy mess all along the course. Good traction was the key to success today. 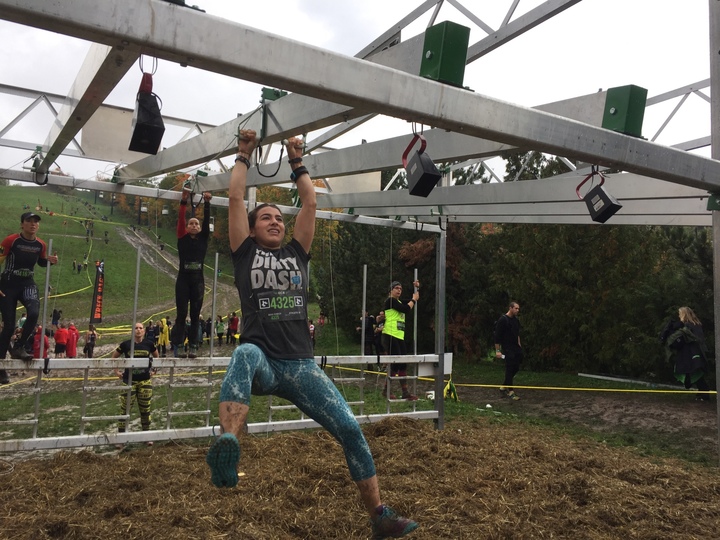 Athletes of all ages head out on the team race today including 14-year old Amelia Martinez who finished 3rd yesterday in her Age Group (13-17-year-old women). 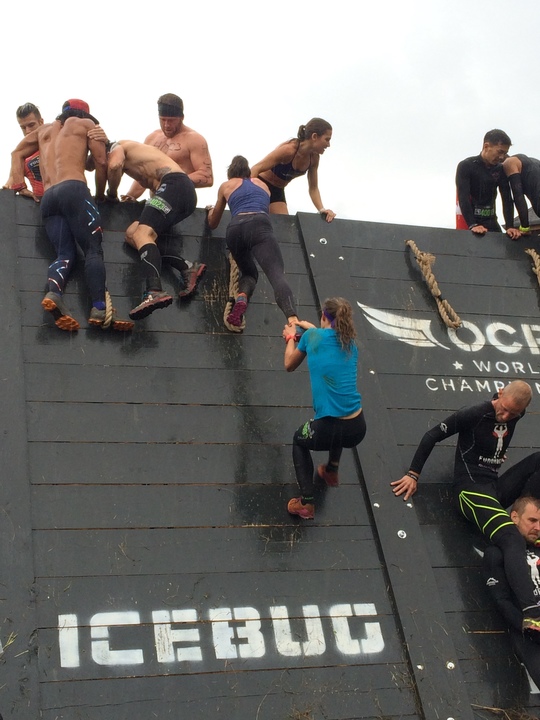 Lindsay Webster grabs teammate Nicole Mericle's foot as Faye Stenning watches for the third place team to arrive at the final ramp wall. Stenning gingerly made her way down the Wreck Bag carry which gave Team Sweden a chance to catch up to the frontrunners and Siri Englund would pass Lindsay's team on the last obstacle section and take the win. 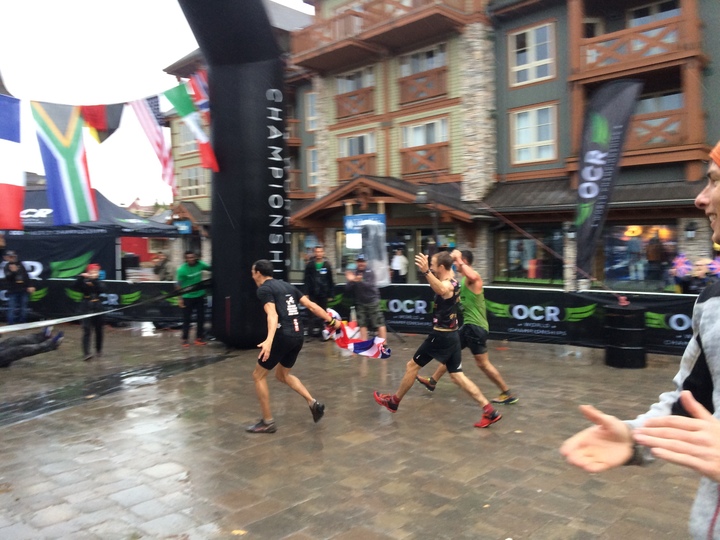 In the Men's Team Race Pro Division it was the UK Men took the win with Jon Albon, James Appleton, and Conor Hancock here celebrating as they come into the finish line. Team Canada(ish) with Ryan Atkins, Ryan Woods, and Jesse Bruce finished second and Team USA with Hunter McIntryre, Robert Killian Jr., and Brakken Kraker. 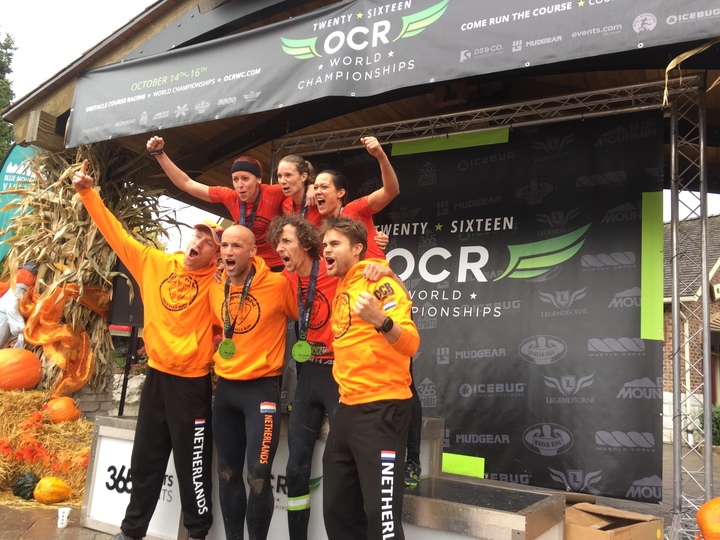 Members of the Dutch Mud Men Celebrate after a long weekend of racing. 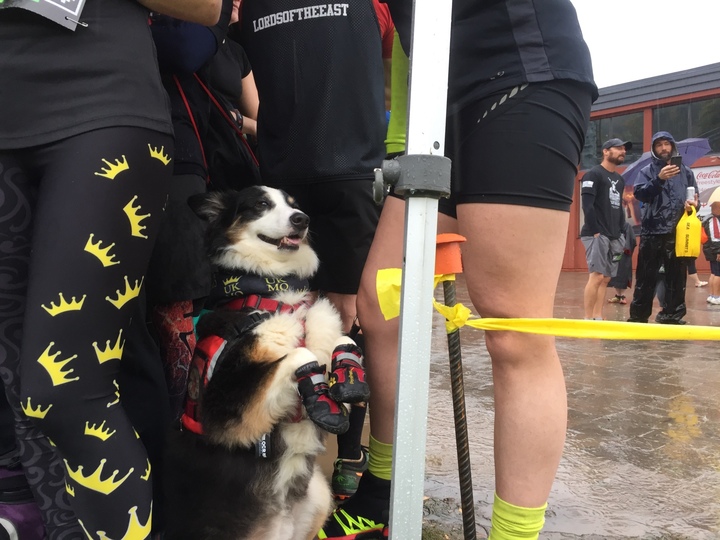 Roxie the Service Dog was representing the UK Mudd Queens today with her new buff next to a Mudd Queen athletes and her owner Desiree Rincon. Notice Roxie has her band. 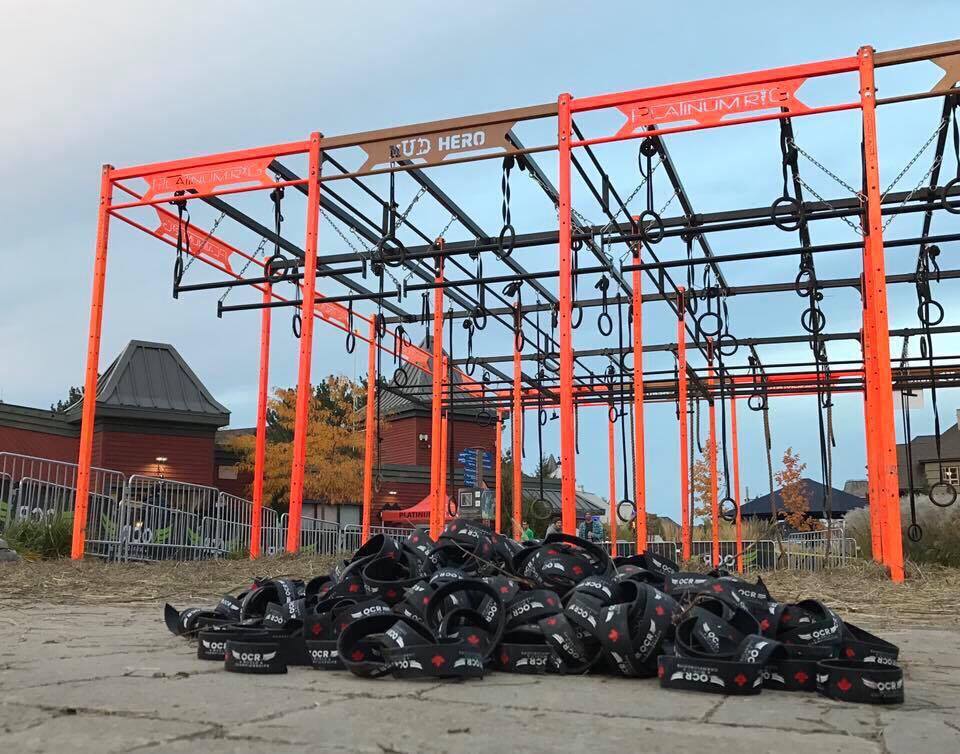 Bands left at the Platinum Rig #1. Always an obstacle which takes a few bands at the OCR World Championship event. 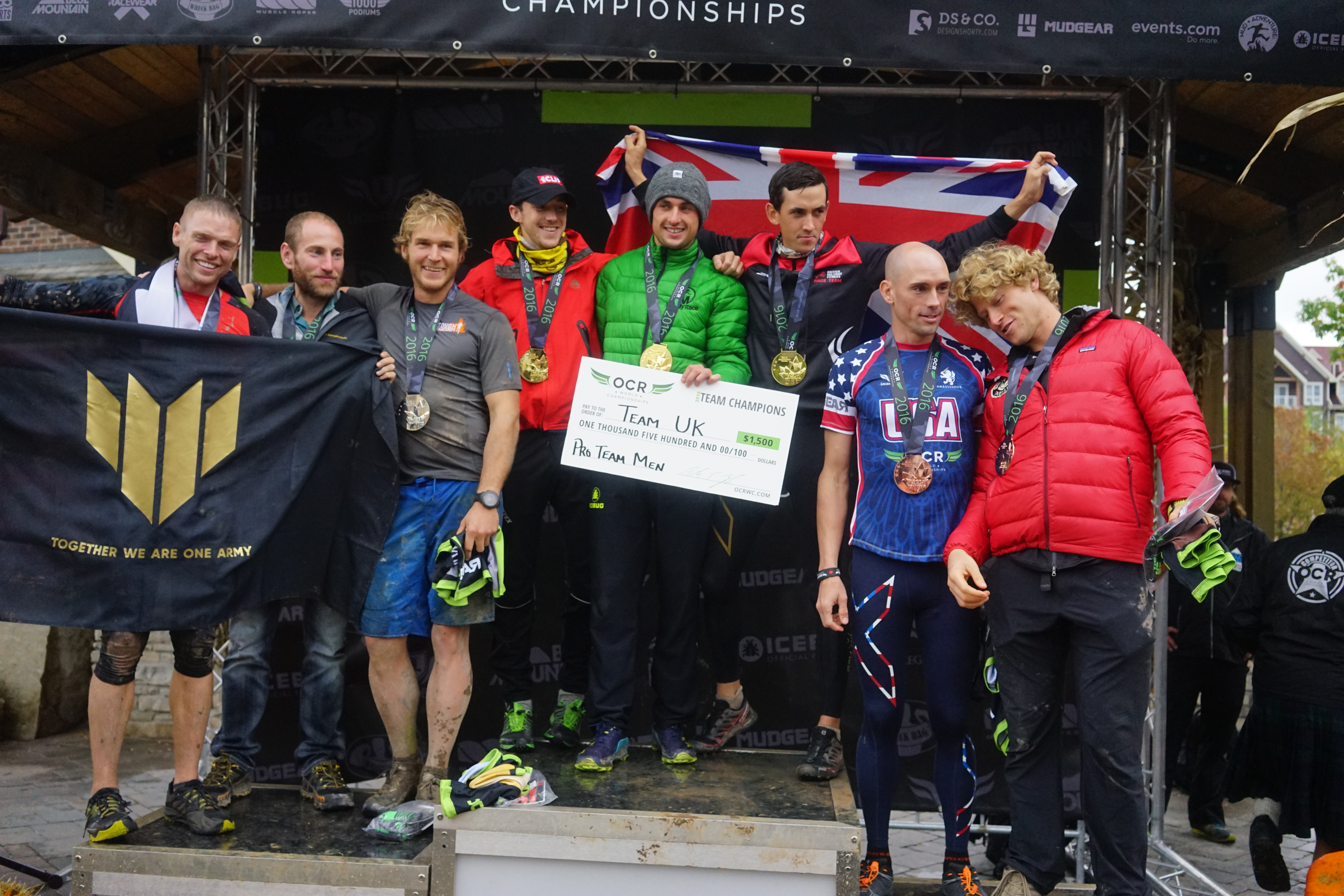 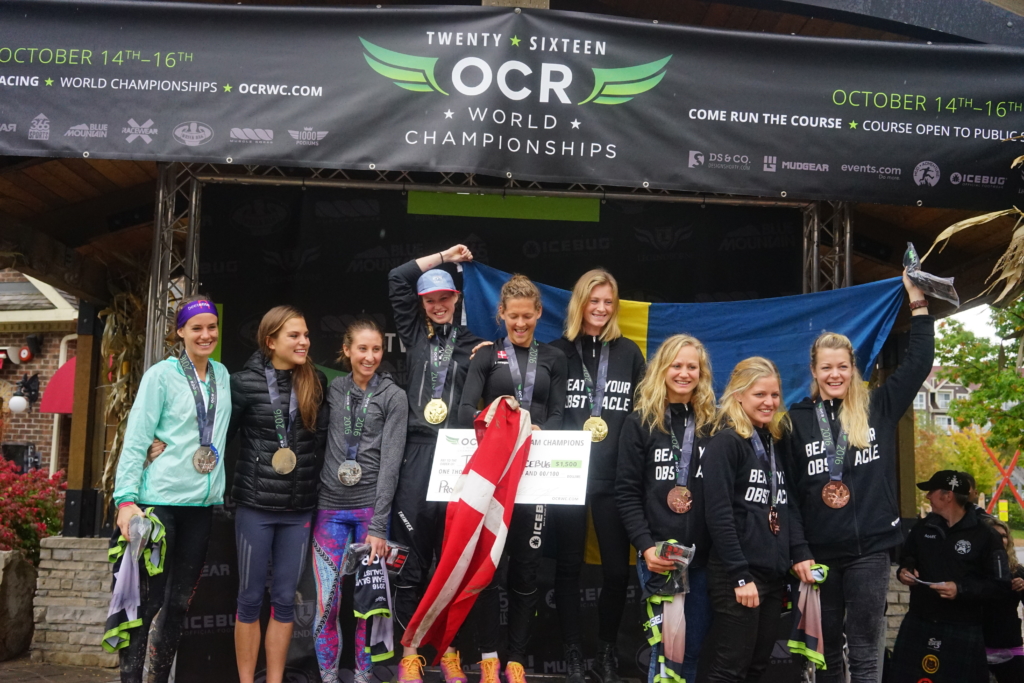 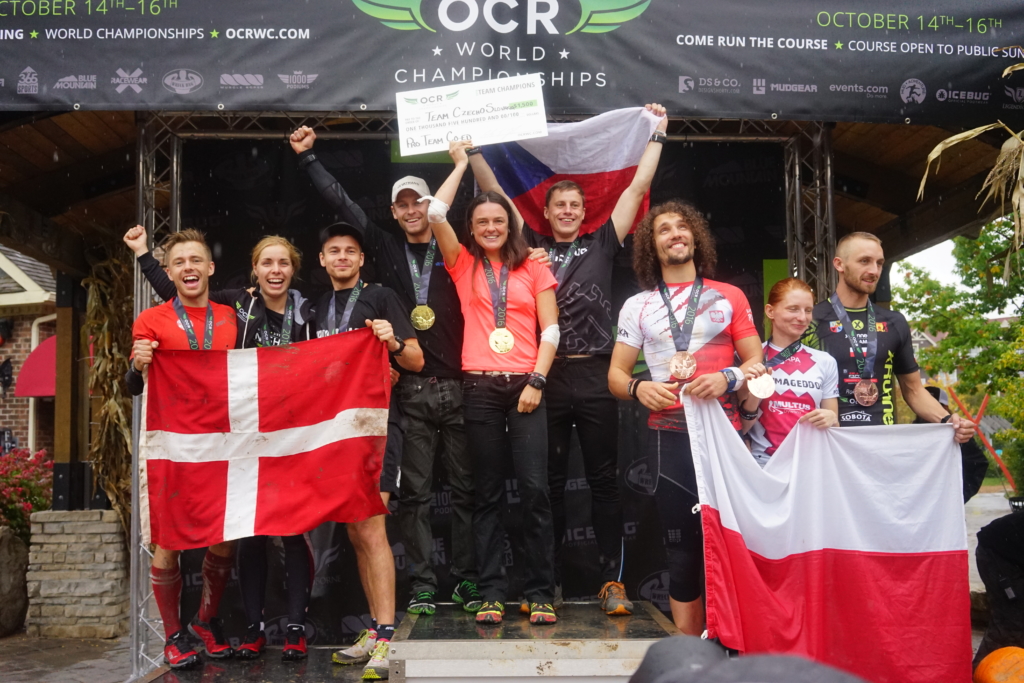