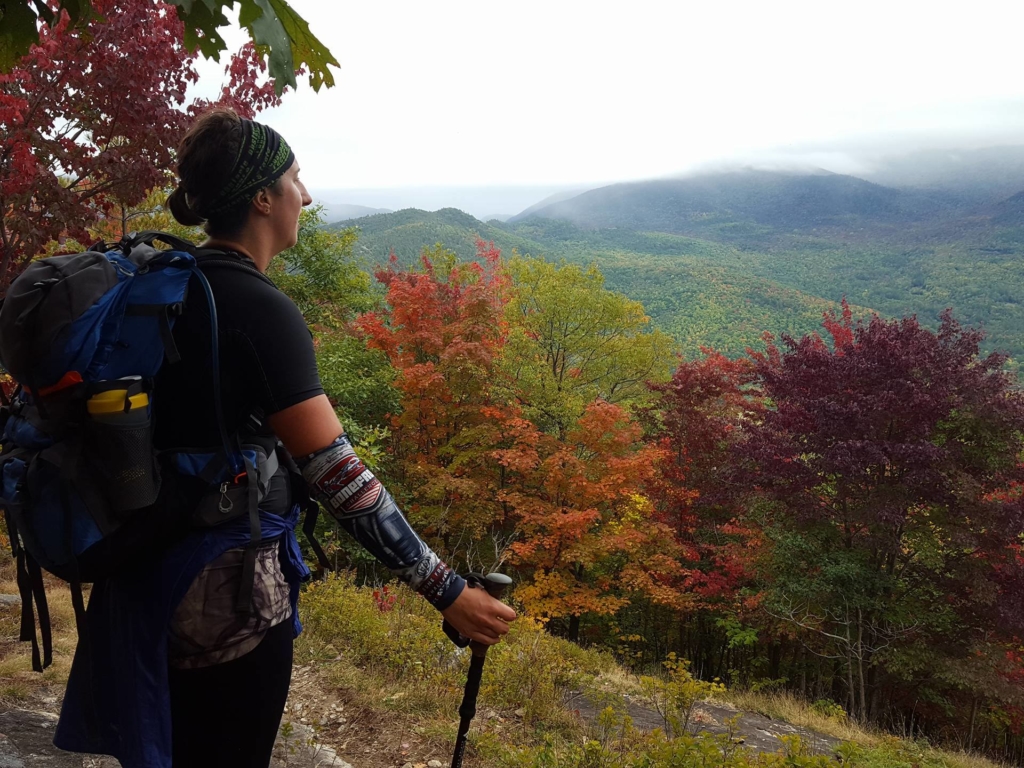 Earlier this year I received an invitation from Don Devaney to participate in a beta test of his new endurance event, the RYNGE. I was promised an event that would challenge physical fitness, problem-solving skills, mental grit and teamwork. The event was described to me as a cross between live action role playing and an endurance race, with the participants writing their own story during the event.

I was initially hesitant at the thought of doing a 72+ hour event as I’d never attempted anything like that before, but then I reminded myself that opportunities like this don’t come along every day. When an incredible opportunity is presented to you, you’ve got to grab it and run with it, so that’s exactly what I did.

The first challenge started months before the event. I’d received an email which included a document with over nine seemingly impossible questions to answer and was given until August 8th to answer them. Every time I looked at them, my eyes would glaze over, and I’d close the document for yet another week. Two days before the answers were due I opened the paper one last time, answered the questions as best as I could and sent them off.

Then it was time to see what I needed to bring to the event. Most endurance events have a gear list that includes some strange items, and this one was no different. In addition to the necessary equipment needed to survive a few days in the mountains we needed things like knapping flint, a kite rod, leather thong, carding wool and a combat helmet. I didn’t even have a backpack, so I hit up Amazon and ordered most of my gear. 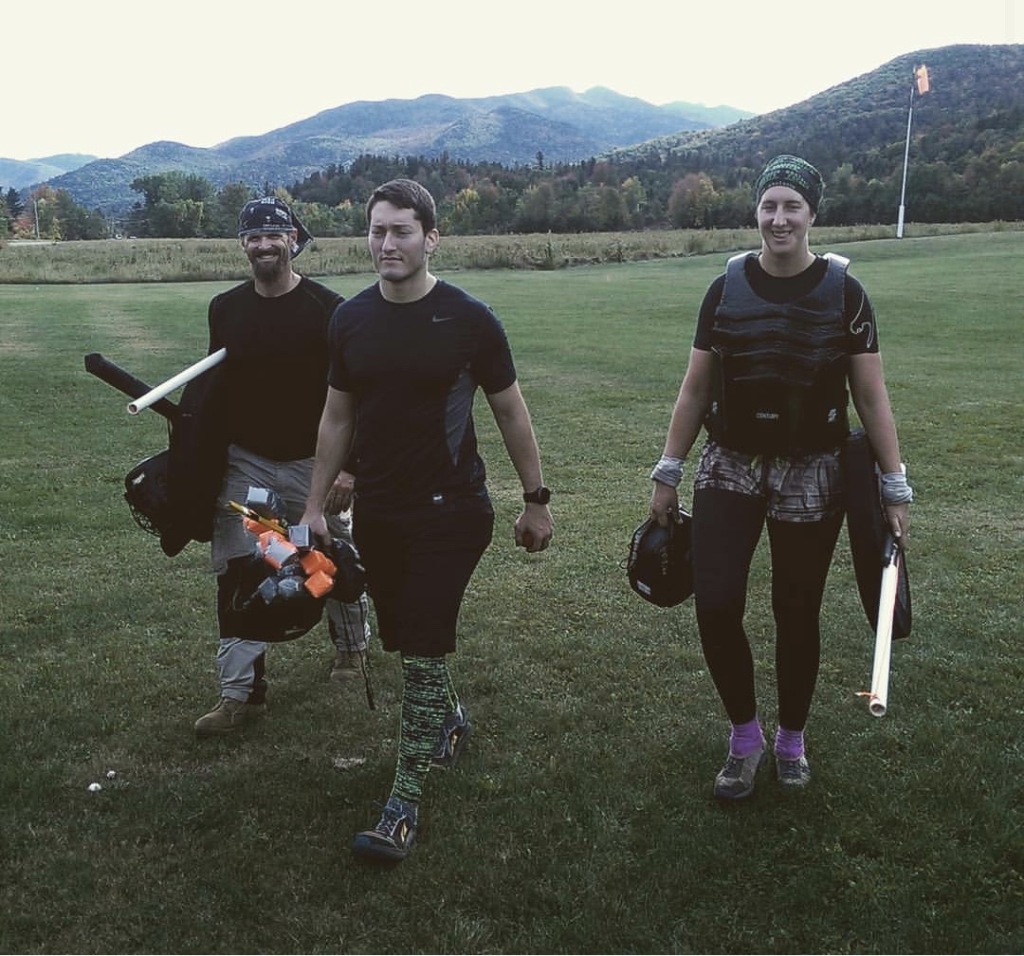 The next few weeks flew by and before I knew it I was standing with my friend BJ Pierce in front of the Adirondack Mountain Club in Albany, NY, awaiting instructions from Don. The first official task required us to buy six items from three places for under $9, so the two of us set out to buy our items. After getting our six items, we drove the two hours to Mercy Airfield (the base) in Keene, NY and waited for the real challenge to begin.

We kicked-off at noon with a gear check, followed by a brief introduction to our tribemates and the staff (known as elders). Only five of us had shown up to participate in the event, and I was the only woman in the tribe. My fellow tribemates included BJ Pierce, Yitzy Sontag, Ross Daniel and JT Bolestridge. The elders all had names such as the Oracle, the Wanderer, and the Trickster, with Don being known as the Elder’s Elder.

Our first task was to find a suitable location for a fort that would keep us safe from the barbarians that would ultimately attack us at some point during the weekend. We were led up a small trail and given some options as to where we could build a fort. We were advised that our first choice was terrible due to the proximity to the trail, so we moved further into the woods and started making shelter and fences for the fort. 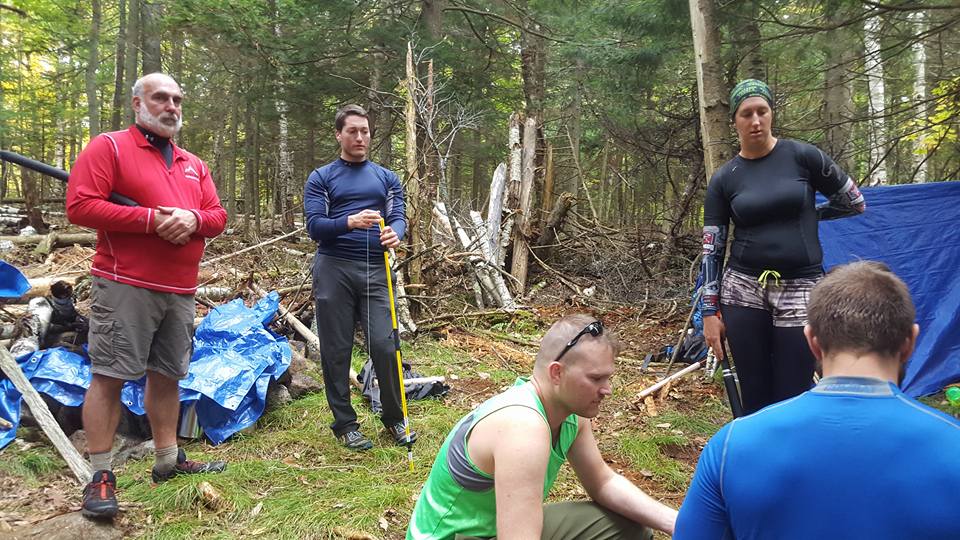 After setting up a basic camp and having dinner back at the base, we were told the back story about why we were there (as mentioned above, the RYNGE is about writing our story) and then told about our first pilgrimage which would be our only overnight hike. We had five hours to traverse three mountains (Blueberry, Porter, and Cascade) and would then be presented with our next task.

Unfortunately, things didn’t exactly go to plan timing wise. I may be able to keep plodding along, but I’m certainly not the fastest hiker, especially when carrying a heavy backpack. Our 5-hour hike turned into an 11-hour hike as I kept asking my tribe to stop and rest. This resulted in several power naps as we’d often fall asleep when resting. 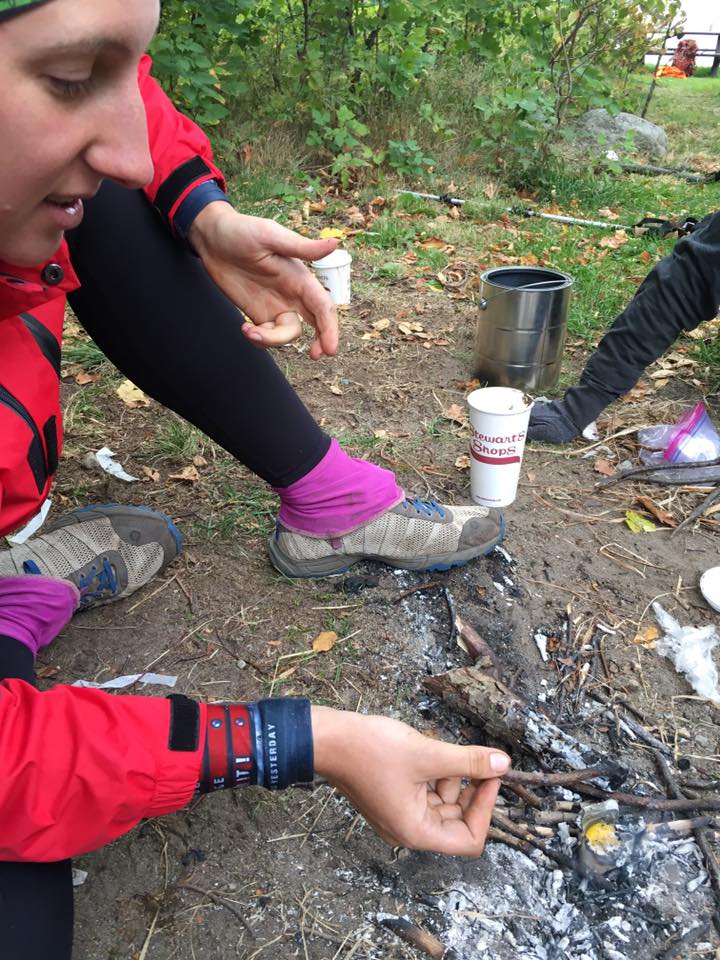 Once we all got to the bottom of Cascade, we had to build a fire, cook an egg, and take fire up a waterfall to the Wanderer. I was the last to reach the top of the waterfall and spent a few minutes teaching the Wanderer about the sounds that a Kookaburra makes before returning to the base. Being the only Australian meant I would often get asked questions about native animals and plants during the event.

While the elders made changes to the timeline of activities, my tribe and I had time to work on our fort. After a few hours, we all gathered back at base and were told to hike (yet again) to the peak of Blueberry for another task. I was already sick of hiking the same trail, but the view from the top was worth the long hike. 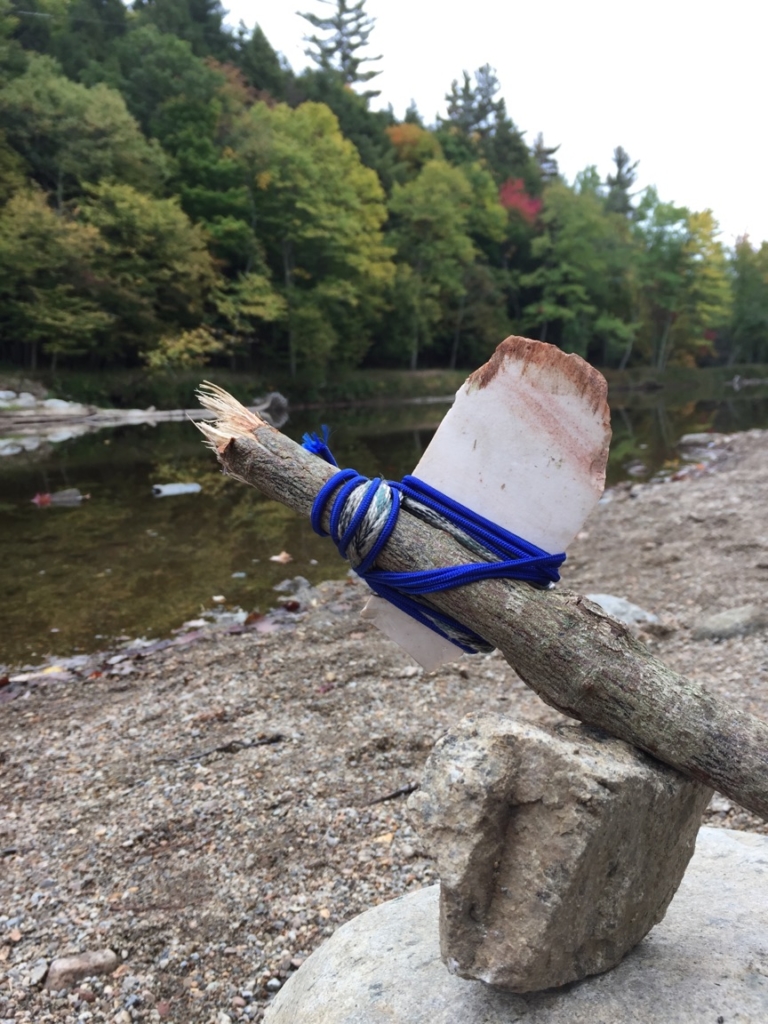 As the event was a Beta, we had the opportunity to break character and give feedback during the event. On the Saturday after dinner, we all sat down and discussed with Don what had happened so far and what was yet to happen. Don then had discussions with the other staff, and it was decided that we could get some sleep but would be awoken at 12 am for the next phase. So at 9 pm I curled up in the front seat of the rental car and had three hours sleep.

As BJ woke me up at 12 am I tried to pretend that I hadn’t heard him as I didn’t want to get up. I wanted desperately to stay curled up in the car and sleep more, but I also didn’t want to quit. So after many tears, I got my gear and returned to the fort with my tribe and helped make it more ‘liveable’. There was tension within the tribe, and I couldn’t help but blame myself as I was still upset due to sleep deprivation and sheer exhaustion. JT eventually returned to base, and we later learned that he’d decided to leave the game. 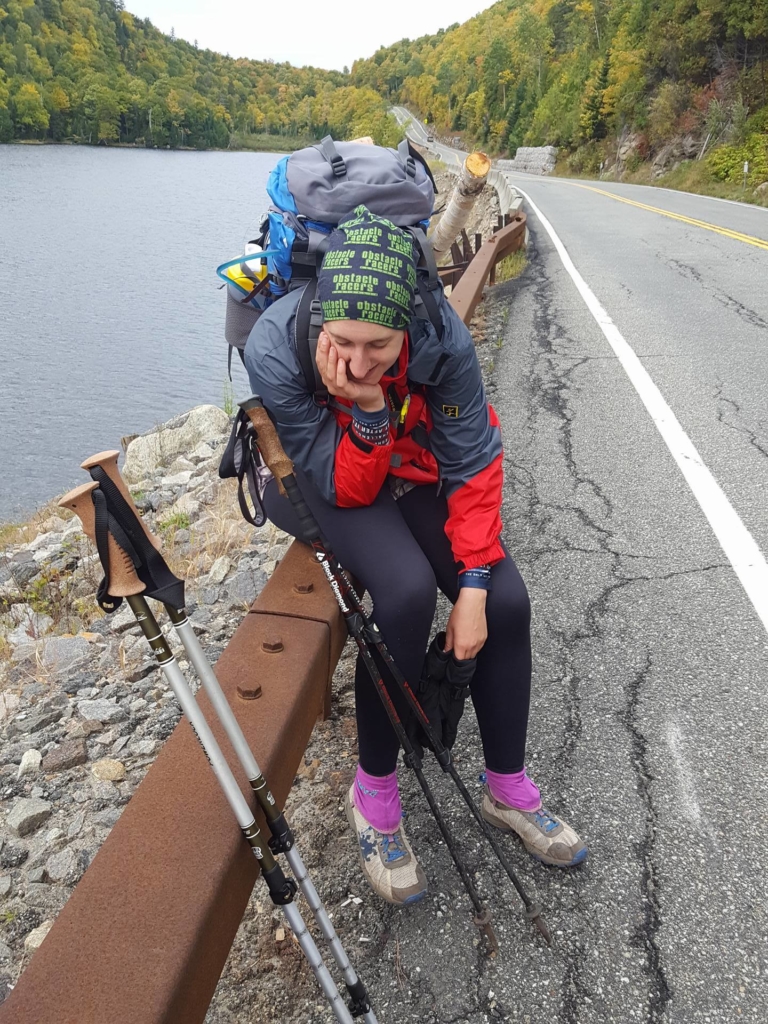 Over the next few hours, we kept hearing branches breaking under the weight of a foot in the surrounding woods. Anytime I heard strange noises, my heart would start pounding as the adrenaline surged through me. We knew the barbarians were watching our movements and it was only a matter of time before they attacked.

Part of the game included making weapons such as axes and bows defend ourselves from the barbarians. My first few attempts at making a club were dismal as they kept breaking, but eventually I made an axe strong enough to chop a small branch. Our actual weapons were later swapped for foam swords when we were taught how to fight by the guys from Knight’s Hall in Nashua. 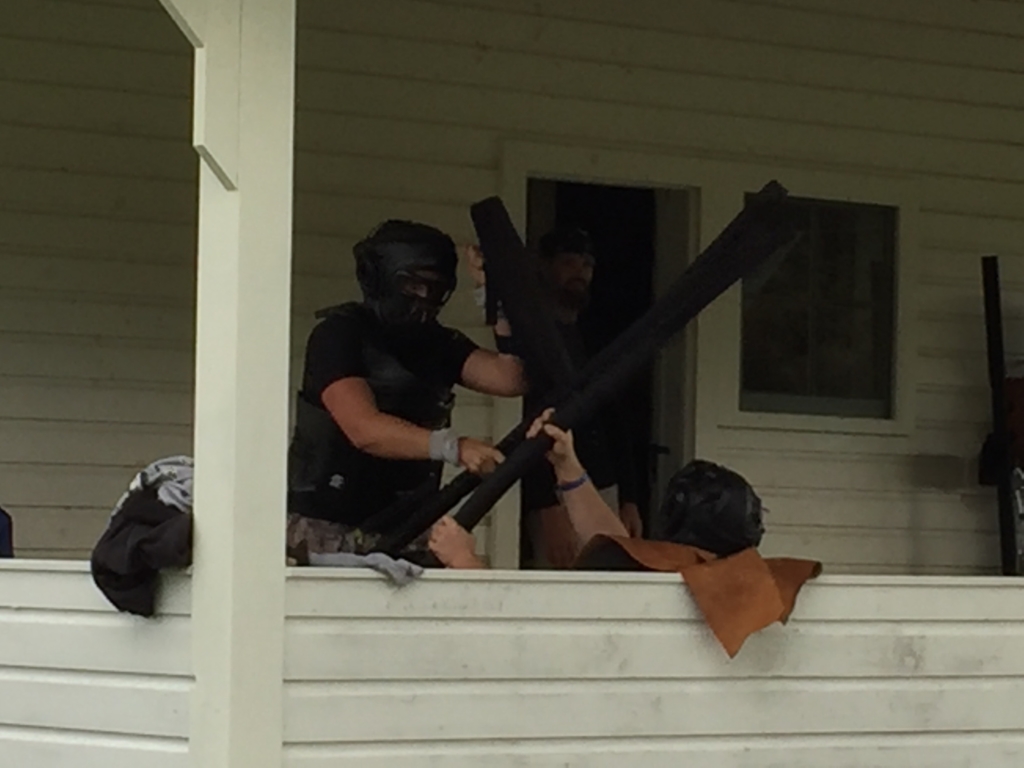 For two hours we tried to defend our fort as the barbarians attacked us. Ross had been sent on a special task, and I’d been left winded after being smacked in the throat by a sword which left BJ and Yitzy defending our fort. The barbarians were merciless as they destroyed our walls, emptied our water reserve and put out the fire. After the fourth attack, I joined BJ and Yitzy as we abandoned the fort and became nomads. Once the barbarians realized that we’d abandoned the fort they made their way to the base for an epic porch battle where I was crowned last (wo)man standing. I can’t even begin to describe the feeling of adrenaline that surged through me during the battle, but it was pretty powerful.

We were 55 hours in, and there was one more hike left to complete the RYNGE. We all got about four hours sleep on the Sunday night before waking at 1 am to make the pilgrimage. I’d managed to barter my way out of what was meant to be an 8-hour hike and instead went on a 4-hour hike to the summit of Cascade.

At midday on Monday, I was told that I’d finished the RYNGE, 77 hours after starting. I’d had about 7 hours sleep since waking at 5:30 am on the previous Friday, and I was looking forward to a shower more than anything. 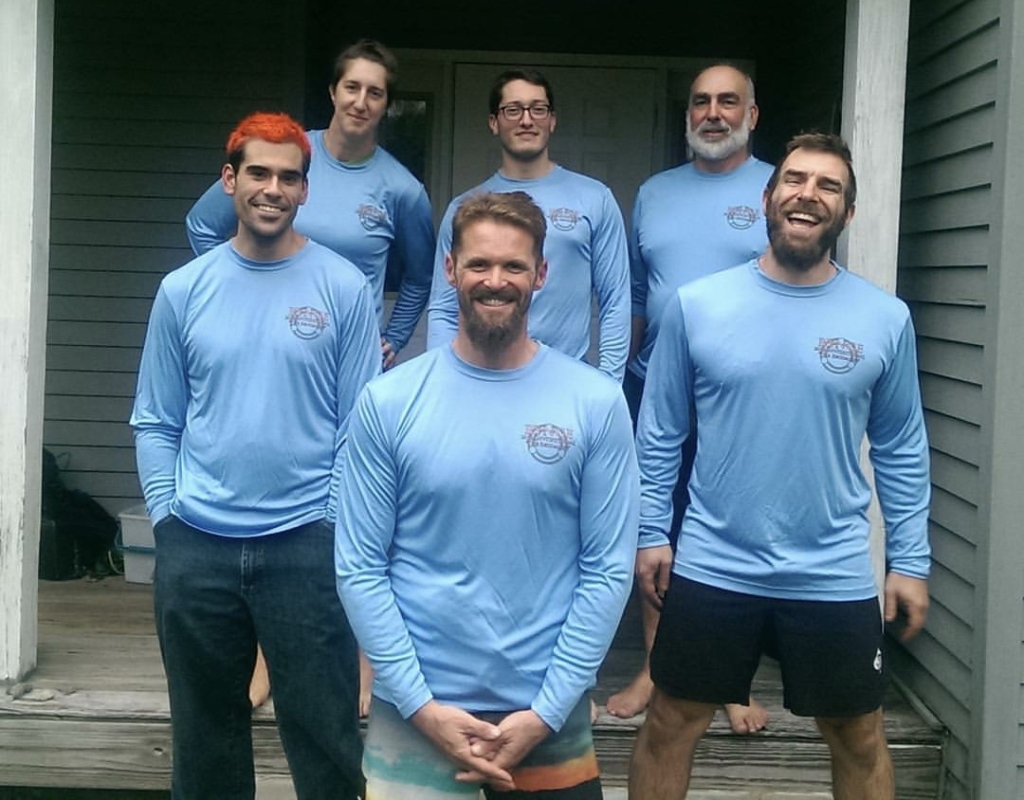 The RYNGE was unlike any endurance event that I’ve done before. It isn’t designed to break you but is designed to help build you up as an individual and a team. It’s an immersion event that gives the participants the chance to write their story while being educated and tested on what they’ve learned.

Despite all my tears during the event I had an incredible time and would strongly encourage others to participate next year. This is not the Death Race. It’s a game, and you are writing the story that goes alongside it. The key to getting through the RYNGE is learning how to play the game.

Vanessa is an Australian who is often found playing in mud every other weekend. After being asked one too many times when she would 'settle down' she decided to leave the corporate world behind and spend all her time travelling the world to do obstacle races.