Race Recap: The Benjamin Dash – A Dash for Cash With a Twist…or Two 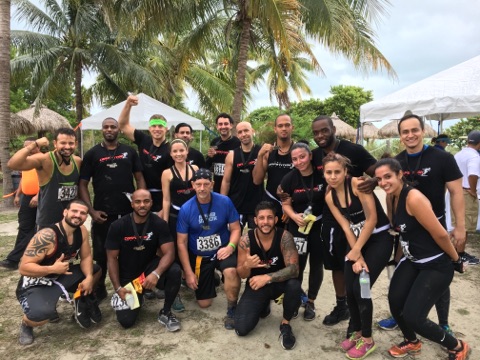 This past weekend would be the third time this year I was at Historic Virginia Key Beach for an Obstacle Course Racing (OCR) event.  It would also be the third time I was at an OCR event that was different than any I'd been to before. This past weekend was The Benjamin Dash.  Interestingly, on the way over, I passed at least three other running/biking events going on and it reminded me just how hard it is to get the attention of people in Miami.  There's just so much going on all year!  So I was very interested to see just what this race was about, as there was apparently cash up for grabs…and not just for elite racers!! 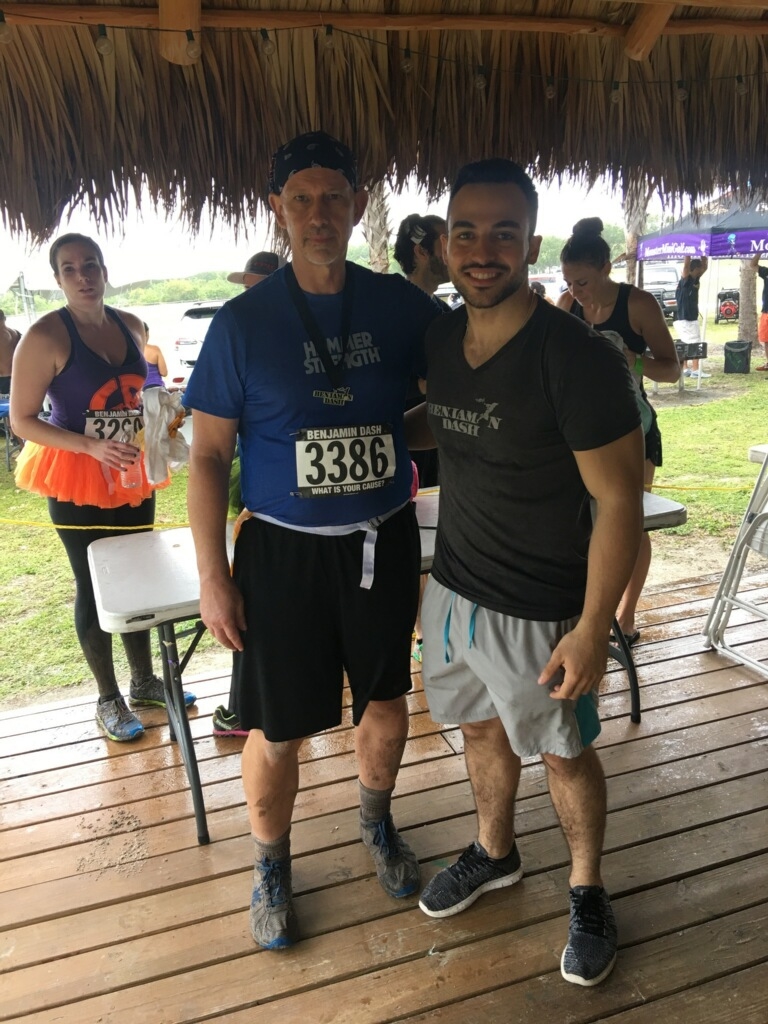 The weather wasn't particularly cooperative this day….windy and sporadic rain…although at 80 degrees or so, the rain was more of an annoyance in the festival area than anything else.  The wind was a different issue.  But the race staff did an excellent job securing everything, so while the wind whipped around a bit, nothing I saw ended up in the Bay.  Not long after I checked in (quick and smooth!), I ran into Giancarlo, co-owner of the race, who gave me a quick rundown on the event.  While it was a standard OCR race, they had placed flags (with implanted chips…(technology is so cool!!) throughout the course for racers to pick up.  And, being a slow racer (but steady….did I mention steady….relentless in fact) in a later heat, I was happy to hear that they re-stocked the course after each heat.  And I said there was another twist….but we'll get to that later.

So, with the obligatory OCR music blasting, the first wave went off at 8am…which included OCR staples, Karlee Whipple of Epic Hybrid Gym and Kevin Jones.  Then it was time to get myself ready for the course.  Having run here twice before, I knew there were some really interesting sections that could be real challenges (secretly I hoped we would hit the cliffs on the “back forty”).  Even with this possibility and the threat of running the mile long sand beach, I decided to go out at my fastest pace…Damn the torpedoes, full speed ahead!  Even without timing, I wanted to see what I could do on a short, relatively flat course here in Miami.  Of course, with the added task of looking for flags along the way. 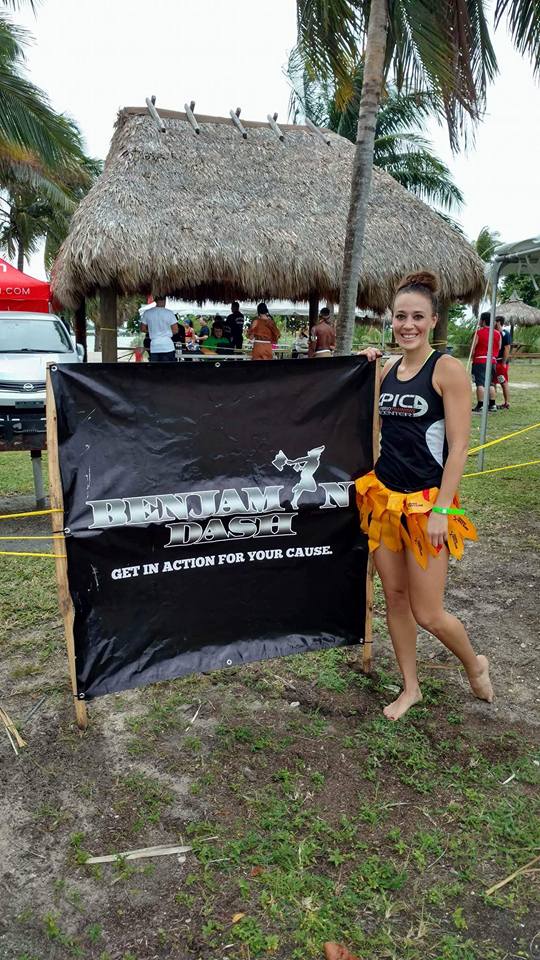 Although I did hear of some people missing a turn in the first heat (some showed up at the finish awfully quick), I found the course to be fairly well marked with volunteers at all the obstacles, as well as at what might be considered questionable turns/intersections.  Early on we traversed a balance beam section then hit one of the tougher slip walls I've seen.  Though it may not have been intended as one…can you say “rain.”  One of my favorite things at a race happened to the woman in front of me here.  She pulled herself up the rope with a friend helping behind…shouting “I can't make it…I can't make it”….all the way to the top.  For me, it was good news for the wrists and hands to make it up without a problem…but somehow managed to make the descent into a comedy/tragedy which hopefully was not videoed.  No…I don't want to talk any more about it.

What I will talk about is my attempt at a Humpty-Dumpty inspired 2-1/2 with a twist off a simple 5 or 6-foot wall (which again I strongly hope was not videoed!!).  As we made the turn towards the beach, we hit a section of walls.  Nothing I expected to give any trouble.  With my recent wrist and hand issues feeling better I was sitting at the top of the first wall and thought I would just hop down.  It would appear that I was not-quite-in-proper-position because I hit hard on my heels….leaning backward and crashing back on…or course…my wrists and hands.  And we all know that brief moment when it's too early to register the pain, and you run through in your mind what an idiot you are.  Fortunately, nothing more than some discomfort or this story would likely have a ghost writer (oh…an accidental Halloween pun??!!)  The next two walls were treated with more respect. 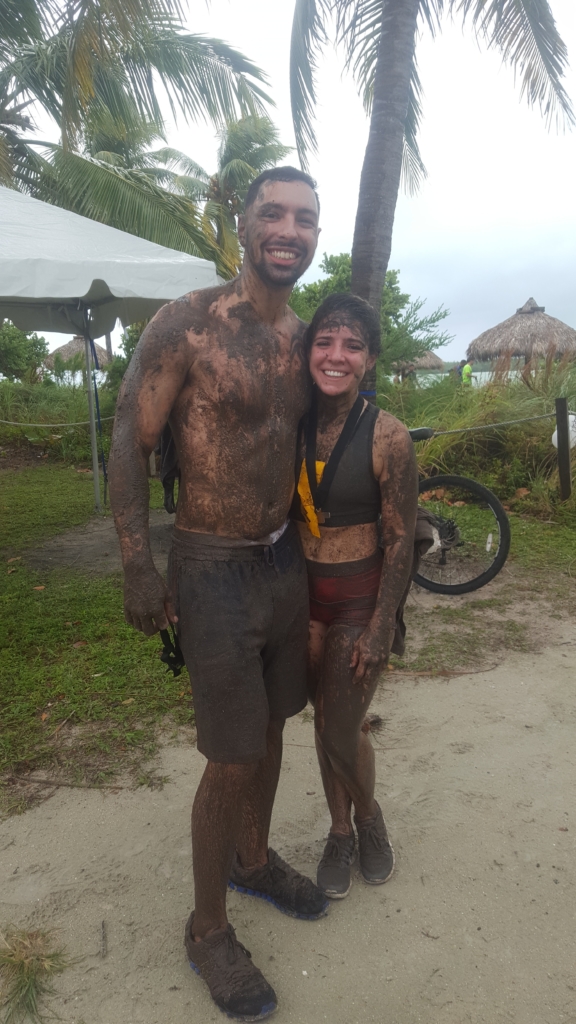 As the race went on, we hit a ramp climb to a cargo net and two short mud pits.  Unfortunately the wires you crawl under had slacked into the mud…but surprisingly most people were skipping even the muddy walk-thru.  Well….I came to get dirty…so while I didn't crawl (I was honestly worried they would call the medics thinking some old guy had lost it) I walked instead thru some of that its-pulling-my-shoe-off mud.  Later, I did run into Bryan and Madelyn who DID have the courage to crawl the mud….and of course I was immediately filled with regret.  Somewhere in that last section we also hit a warped wall which I was again, pleasantly surprised to see.  And again, intimidated….having finally recovered from dislocating my shoulder on a similar one the summer before this.  But I gave it a shot on the rope….and made it to the top.  Then a quick grab of the kick-plate at the top and I could pull myself…..wait!!…..it's not a board, it's a what?!….piece of molding??!!  So, there I was…hanging my 220 lbs by two fingers pinching a piece of rounded molding.  Not a naturally tenable position (please…please tell me there's no video on this one either).  I did try again and made it to the top…again…but just didn't have anything left in the hands by then so I had to bail out.  I'll be back for that one, though…this isn't over yet!!

After the last mud pit, we headed up the beach through sand and surf towards the finish line.  While I had my fasted OCR 5K time ever I'm sure, it was not a course without a few nice challenges mixed in.  And I started thinking afterward; this is a perfect starter course to finally get your friends and family to come out on.  You've been trying to get them to see what OCR is about, but they're intimidated by races that pride themselves on trying to kill you.  This one is different.  Not only are most of the obstacles very doable by most people…certainly with help…there is nothing stopping you from skipping an obstacle you're not quite ready for.  Not to mention having some fun outdoors in the woods, sand, water and mud.  Oh….and don't forget about the money flags!!

Remember that second twist I was talking about?  While I was milling about after my race, I ran into Bryan, the other race co-owner.  We had a chance to talk about what Benjamin Race is all about and what you can do with your flag money.  Benjamin Race strongly believes in the concept of giving back to the community and in the benefits of healthy mind and body.  So you see, when you bring in your flags to cash-out you have the option of keeping the money, donating it or a combination!!  And by the way, as I mentioned, the flags are chipped….and they are also preassigned the amounts, so you don't know what you have until you get back!  Not only was I impressed with the race and overall organization, but I was also very impressed with the vision and message of the owners.  I would certainly recommend it on both counts. 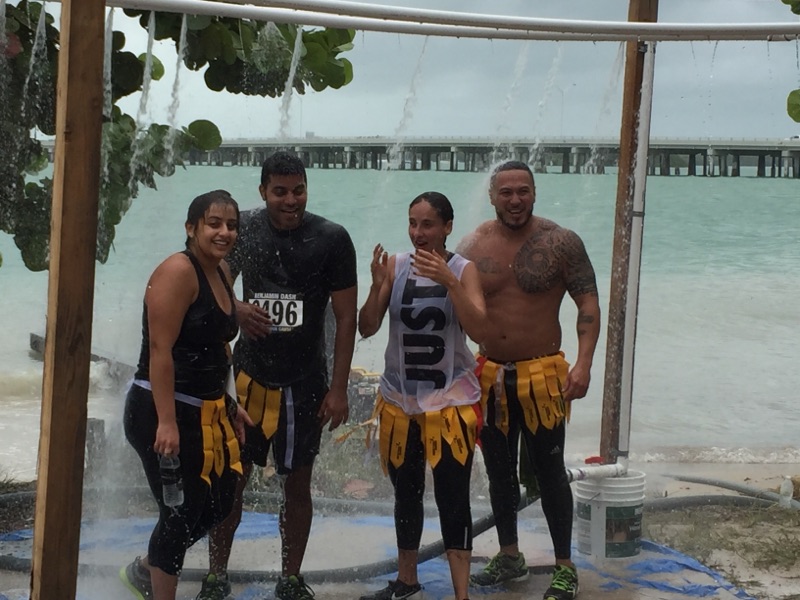 Lastly, though, and I suppose it's the engineer in me…again…I have to say something about the showers.  Pre-race, in the rain, I saw this guy putting together a contraption at the finish line and happily drilling away at the overhead pipes.  I also saw a pump and some water lines.  My curiosity was piqued as I wondered if I needed to be there (videoing of course!) when this thing was turned on.  I wasn't.  But I was there, later on, to see what was to me, the greatest race shower ever!!  I mean real jets of water to clean off with…leaving both hands free!  You'd have to scale it up a bit but I'm thinking some races should be looking at this…real hard….please….