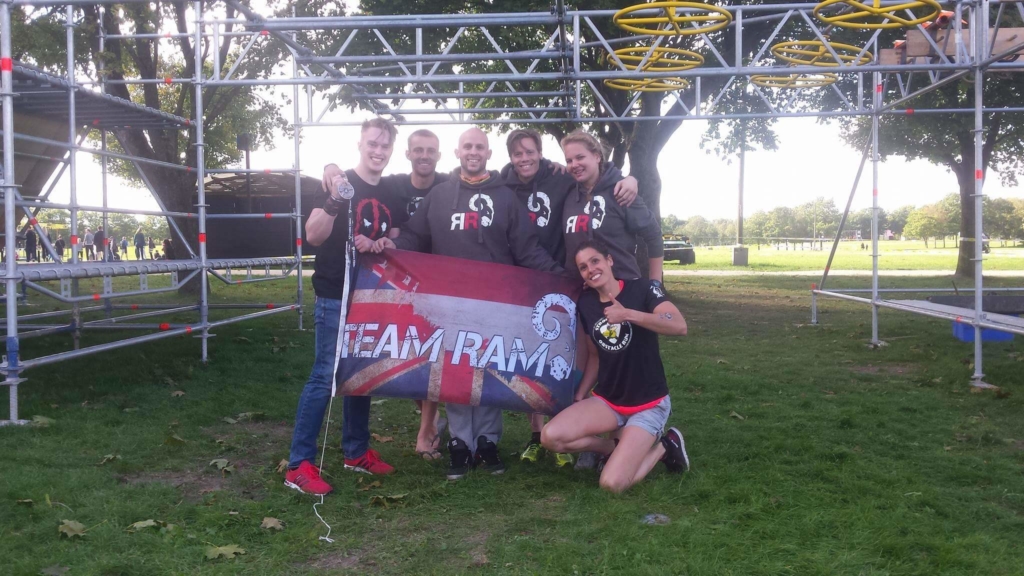 Strong Viking Roskilde. The first time Strong Viking set foot in Denmark, and we were there! Six RAM strong we travelled to Denmark by train, being hissed at for whispering in a “silence compartment,” then flew to Copenhagen and met the female versions of Waldorf and Statler on the airport.

In Denmark, we rented two cars, got completely shocked by the prices of well everything and made our way to the Hostel in Roskilde!

We arrived on Friday, so had a chance to check out the killing fields. We noticed two things. The terrain was flat as a pancake and the obstacles like back at home. We had some fun on the Varjagen Saga rig before being asked to leave the premises. Amped up for the next day we went back to our Hostel. 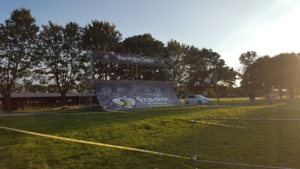 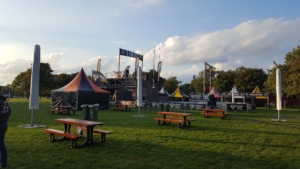 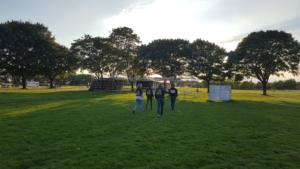 Race day! We arrived, got shocked again by the parking fees and headed up to the registration. I was hoping to be able to qualify for the Euro Championships at Roskilde, so I was a bit startled by the fact that we only received a red wristband (showing we were running the Odin wave) the blue armband which had to be taken of upon failure at an obstacle and a temporary tattoo with the starting number on it.. Where and how is the time being registered??
The tattoo didn't work for me, rubbed it off quicker than it was on, so borrowed a marker and put my number on my arm. We got interviewed by a Chinese vlogger, met a bunch of friends and some new faces. Started to get ready to race!

We made our way to the starting area. That’s when things went south regarding the qualifying. We heard there wasn’t going to be individual timing (saw that coming, but ok), no officials on the course and people were expected to take off their wristbands on their own if failing an obstacle. Two problems arose there. First of all the obstacles were a mystery to most of the runners, so how where they are going to know how to do them? There are a lot of Strong Viking obstacles that can be done two ways, the wrong/easy way, and the right/hard way. Secondly, how can you expect people to be fair and take off the bands themselves if NOBODY is there to monitor? It became clear the chances of qualifying where slim to say the least.
We were told the official start of the race would be behind the first starting wall, like at home, but that we had to wait there until we received a second starting signal. After a short warming up the first countdown started and off we were! Over the wall and lining up on the field behind the wall. That was going to be the starting time. I think we were with about 300 in that wave so that the first runners would be getting the same starting time as the people way back. Cool.. I made my way to the front as much as I could. Another countdown and off we went!

The first few kilometers felt good. I was able to keep my pace up. Messed up a bit on the “Dragon Ropes” trying to avoid getting kicked by the guy next to me, but was still able to ding the bell quicker than most of the people around me (what’s up with the lack of people able to do a proper footlock??). Managed to hit the bullseye at “Throw the Hammer,” so no burpees there!
I then started to heat up. There were no clouds at all, and with the 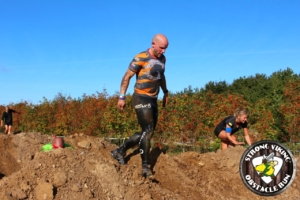 low humidity, I was hoping to be able to hit some water obstacles! The “Mud Mile,” which had more tracks alongside than through, and followed up by the trenches! The water wasn’t necessarily deep, but the humps were steep! We were struggling to get a grip on the loose dirt while being passed left and right by racers running past the trenches. Were we doing an obstacle race or a trail run? Oh well, I was doing an obstacle race, so carried on! After a few more obstacles the big slide, the “Fjord Drop” showed up!
Off to the “Hammer Banger.” Another obstacle unknown to a lot of runners. The volunteer needed to tell two people not to bang the log from both ends but take a separate log each and then kept shouting we only had to do 12 hits. I managed to move the log to the end in 9, so off I went! 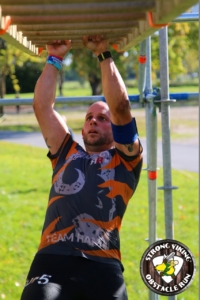 The renewed “Monkeybars” with wooden bars instead of the steel pipes where a piece of cake, but then came what my teams chief would probably call the “Red Perils.” What should’ve been the “Over and Under” turned out to be Over and Overs. 42 (!?) Red wooden fences swirling through what looked like a barn.
Then came the “Storm the Castle.” Right in front of me I saw a few runners struggle to get up without using the race wave ropes. I decided to go safe, ran towards one of the ropes and planned on only grabbing it if necessary. I ended up grabbing the top part with one hand and the bar with my other. Probably wouldn’t have needed the rope, but hey I was at the top!
Off I went again. The terrain was flat, so I tried to keep my speed up. Encountering all the familiar Strong Viking obstacles. While crossing the water, I managed to trip and land with one knee on a rock under water. Putting my full weight on it plunging forward. Luckily the cool water helped so that I could move on.
Not that much potential armband losing obstacles, until we reached the “Dragon Tails.” I noticed people where having a lot of trouble attempting the rope traverse and cat crawl. Left and right people decided to skip the obstacle and no armbands taken off of course. Losing time again, but to hell with that! I was not going to lower myself to skipping an obstacle! 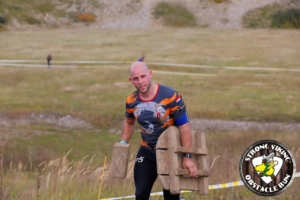 Off to one of the p.i.t.a. “obstacles,” Carry the Shield. Up and down some hills with a wooden shield and hammer. Knee still hurting a bit, so didn’t want to move too quick along the uneven sandy terrain. Afraid of twisting my ankle again. After a few kilometers reaching the “Walls 2.0”, starting to turn into my favorite obstacles. Just like at my last Iron Viking I had little problems climbing the high wall without the use of the little race wave ledge. Again it became clear the racers weren’t instructed properly since people were helping each other over the walls. And also another potentially dangerous obstacle without volunteers.
Off towards the finish of the 13km. Just before the loop for the 19km came the “Platinum Rig.” Here the volunteers stated the obstacle was “Fail is burpees,” so there were lots of people (with their bands on) doing burpees. Saw people crawl over the monkey bars, and skip the rig completely but managed to nail it on the first try again!
Making my way past the rig my ankle started to get sore on the side with the bumped knee. The ankle that I’ve been struggling with since my first obstacle marathon this year. I lowered my pace a bit, going back to a steady pace without pain. Another favorite obstacle, the “Strong Wall”. Jumped up, pulled myself over the wall and off I was. The distance between obstacles increased a bit. The “Rope XL”, an absolute armband monster back at home, was dry and didn’t take that much effort to climb to the top.
Then came the “Weaver.” People who’ve done the weaver know it can be quite a p.i.t.a. If you manage to get a cramp or are already tired. Also, you almost have to have done it before to know what to do in the first place. Left and right people were running over the logs, instead of the over/under/over/under like we were supposed to.
I then flew over the “Two Bars,” eased up on the sand bag carry not to injure my ankle and knee and made my way towards the “Gunnors Struggle.” I forgot this obstacle so chuckled a bit when I spotted it. Another absolute armband killer back home. A fairly large group of people where held up here. I noticed people were doing second and third tries here. I grabbed the bar, swung myself across and didn’t take time to see how the rest was doing. Off I went. GPS showed I should be nearly there. I swirled back onto the festival area, running towards the “Varjagen Saga.” As expected this obstacle was hard, skipped a lot, done incorrect and with a volunteer with no idea what he was doing telling people to do burpees upon failure. I ran up the first inclined wall, saw a guy struggling to get across dragon back so showed him there wasn’t much to it. He quickly followed, and we went on to the part where we had to enter on a steal pipe then move on to the two wheels, swinging around until the platform to enter the rings. Made my way across the pegs with the rings and started the pegboard. Decided to start as far away from the platform as possible. Without too much effort I made my way to around two-thirds of the board and then swung myself onto the last platform! I was through! Off towards the “Walhalla Steps,” launched me onto the higher bottom step, then easy up the others. Another Strong Viking finished! On the other side, a guy (probably from the DOCRA) was almost frantically trying to write down all the finishers numbers of those finishing with armbands and finish times. He was not having a great time…. I suppose the fact that 90% of the racers finished with their armbands didn't help. 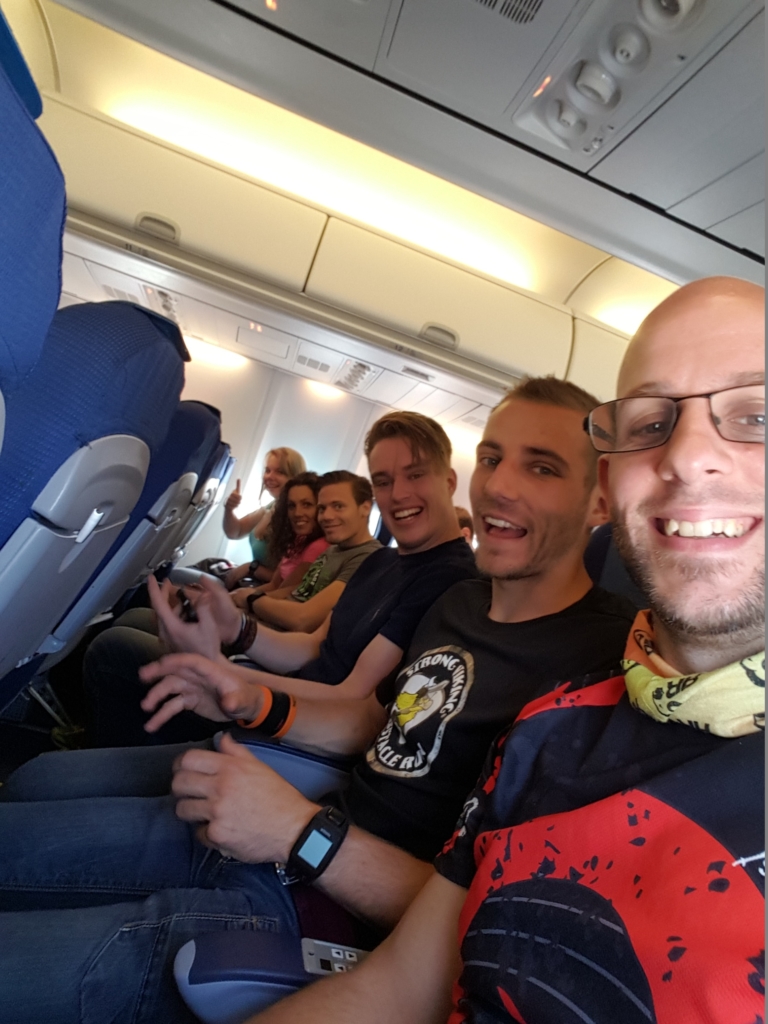 We left around five hours after the start of the race wave and people where still crossing the finish line with an arm band. So he had his work cut out for him!
Later I heard that only the top 10 would qualify for Euros, so I don’t stand a chance there. At least it was a nice training for the next qualifier!

All in all, I found the race to be average. The greatness of the Strong Viking obstacles was nullified by the lack of instructions and volunteers/officials. The competition was a joke without a timing system, and the arm bands were almost useless as a means of qualifying. The course was like I said before flat but at least they overshot the distance “only” around a kilometer. In my opinion, they should look into using the more rugged terrain surrounding Roskilde. We enjoyed ourselves, but taking away the true race spirit of Odin was a real buzzkill to me.

Next week we’ll be going back to the roots of our team. We’ll be doing a double race weekend with the Autumn RAM run on Saturday and a Spartan Beast on Sunday!
Thank you for reading!