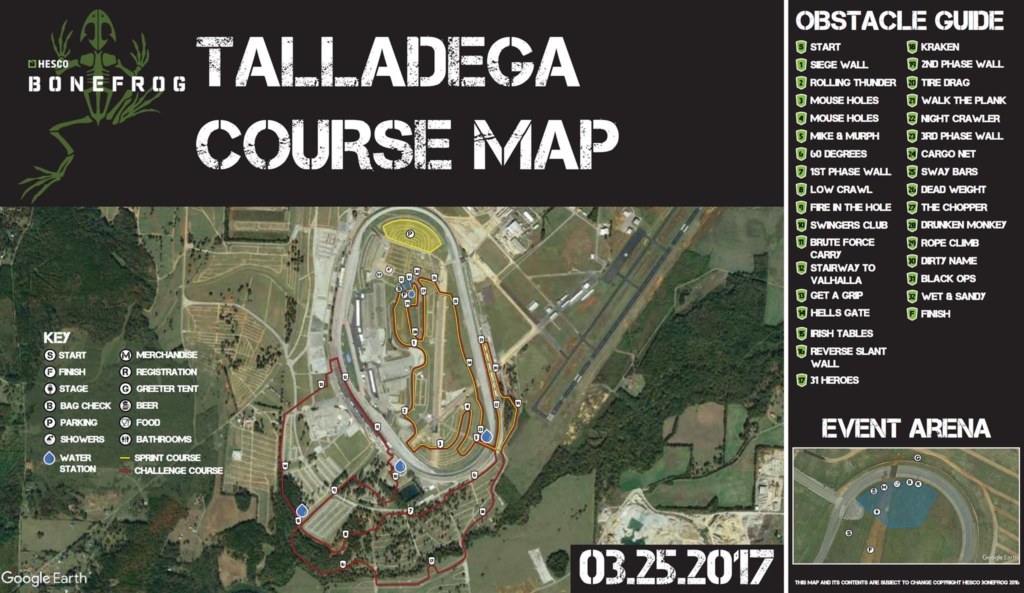 Bonefrog Challenge‘s second race of the 2017 season took place on March 25th, 2017 outside of Birmingham Alabama at the Talladega Speedway. The following is our quick overview and recap of the race.

Distances Available: You can pick from 3 race distances.  Sprint (3+ miles).  Challenge (8+ miles).  Tier-1 (run the challenge course then the sprint course for 11+ miles).

Parking: Parking was on the infield of the track, and cost $10. It was approximately a 5 minute walk from your car to packet pick, race start, and race finish. The bathrooms & showers were halfway in between the finish and the cars.

Facilities: They had actual (warm) private showers & bathrooms! These were in a permanent structure used on race days, so were quite nice, and there was no shortage of them.  No changing tent, because you have your own private shower stall.

Packet Pickup: It went super quickly, they simply looked up our name, handed us bib & shirt, and we were good to go. 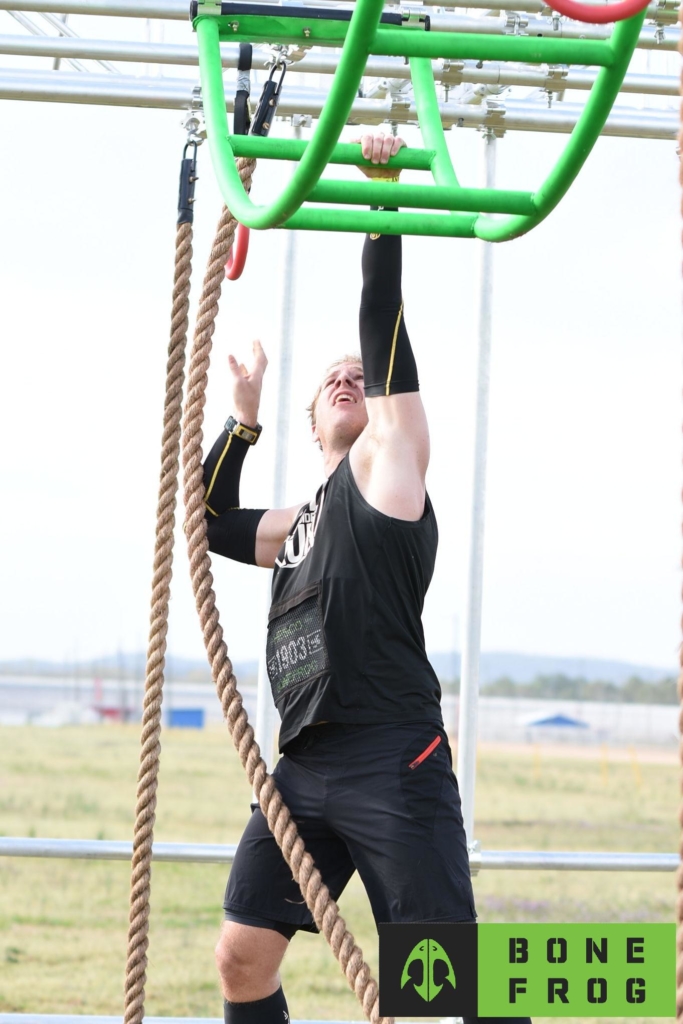 Festival Area: More than your local mud run, less than a Spartan Race / Tough Mudder. A food truck or two, demonstrations/trucks from some of the military branches, and a few vendors scattered around.

Attendance: According to the results, there were 600 finishers [318 Sprint, 179 Challenge, 103 Tier-1]. This is slightly less than the number of finishers they had at their Atlanta race last year, which was 671. However, Atlanta is a much bigger market, so the proper comparison will have to wait until they return to Atlanta this fall.

Course / Race Review: The race took place at Talladega Speedway, and for the Sprint version of the race, 75% of the race actually took place in the infield, which was a cool experience, even not being an avid NASCAR watcher.

The 3+ miles clocked in at 3.8 miles, and ended up with approximately 20 obstacles. Bonefrog had 3 new obstacles at this race, which should be at all their races for the rest of the year. Since I only did the sprint (3-mile) course, I only had a chance to do 2 of them. “Sway Bars” is their new rig with ropes, rings, and a curved set of monkey bars [You can find a video of Sway Bars from during the race here]. “The Chopper” is reminiscent of Wheel World from Savage race, but they aren’t wheels, but crosses instead [You can find a video of The Chopper from during the race here]. Both of these new obstacles fall into the more challenging/difficult scale relative to others that Bonefrog has, but are also quite fun.    For a brand new racer, or someone who fears upper-body-intensive obstacles, these might prove to be a little too tough, but plenty of people were getting help from their friends on course to complete the obstacles. 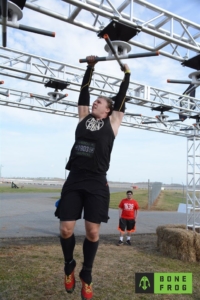 The first third of the race was entirely on the infield, with a few walls, crawls, and a rope swing over water. After ducking through a tunnel under the track, we hit the course split for Sprint (3 miles) and Challenge (8 miles). I veered left with the sprint. After another wall, and tire pull, we went up an embankment and then ran along the top of the track for a while. After a scramble down a hill and a crawl under a cargo net, we were back in the infield. Another wall or two, and a tall cargo net climb, found us in sight of the finish but with several loops & obstacles in between us. This is where their signature obstacles were all placed – Sway Bars, The Chopper, Black Ops, and more. Having run in the 9am wave, I didn’t encounter any backup on any of the obstacles, and when I went back on the course later, I still didn’t see any major backup at these obstacles. After Black Ops, there was one barb wire crawl, and we were across the finish. After crossing the finish line, and getting our medals, they had computers set up you could verify your time and print out tickets which had your time, and current placement overall, by age group, and by gender.

After finishing, bag check was next to the exit, and showers were on the way back to the cars, so it was a streamlined process getting wrapped up and home. 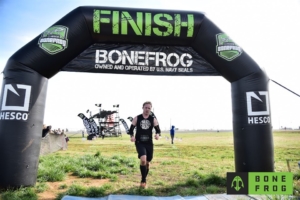 My one negative for the race is likely a matter of personal preference, but was related to obstacle order & placement. After finishing, my legs were definitely tired, but I was asking myself “Was that all the obstacles? Did we miss some? Is the race over?” As mentioned, the sprint had ~20 obstacles. About half of the obstacles I would group into the standard/simple things you either just jumped over (walls, etc), or crawled under. Out of the remaining “other” obstacles (~10), only 2 of those were in the first 3 miles. So, essentially, to me it felt like a long 3 mile run (with a few walls, crawls, and an obstacle or two thrown in), and then in the last 0.5-0.8 miles, you hit the “real” obstacles [both the new obstalces, Black Ops, their Sternum Checker, their rope climb, etc]. I honestly think that if these obstacles I mention had been re-ordered and been more spread out evenly throughout the course, I wouldn’t have the same “disappointment” I initially felt. But again, this is likely simply a matter of personal preference [and that my mind tends to forget some of the walls that count as obstacles quite easily – a benefit of not being short, I know].  And I also understand some of reasons/needs for why it might have *needed* to be this way [you need some walls at the beginning to break up the large group, and you want your signature obstacles at places where spectators can view them].

Overall, my preference for course design aside, it was a good race.  All the obstacles seemed well-designed and well-constructed.   Bonefrog is continuing to bring new obstacles to the table, with The Chopper and Sway Bars being fun (and challenging) new additions to the course.  The venue selection was a also a nice change from the farms & pastures a lot of races in the Southeast use for the majority of races, and I'm not just saying that due to the warm showers either.

Bottom Line: Would I recommend Bonefrog to a friend? Absolutely! Would I do another Bonefrog? Yes!