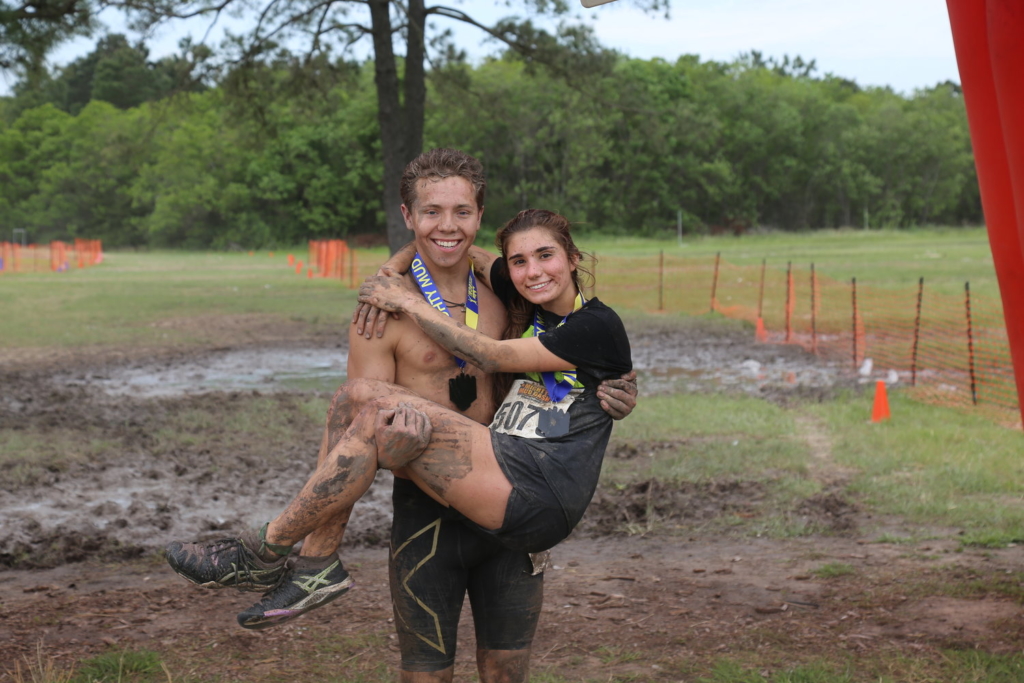 After a morning which seemed like a bad April Fool's Day joke of missed alarms, traffic and more my girlfriend and I arrived, a bit late, at The Mighty Mud Dash. Although I missed my initial heat instead it let me run for fun with my girlfriend taking on the course together.

Alright, so right off the bat at The Mighty Muddy Dash we were ankle deep in some pretty slippery mud, stretching for about a hundred yards before opening up to some pretty relaxed running through some grass (what would typically be the place for runners to gain some distance in a competitive wave). This went on for a little over a quarter mile, with us following a slightly winding path out in the open before reaching our first obstacle: Tube Tunnels (described on their website as “a long, dark, and muddy tube that goes through a mound of mud”). Immediately after that was Fenced In, a low crawl under some chain-linked fence through some trenches of mud. Then came Dark Knight (covered mud trenches), followed by Muddy Mayhem, which is exactly as it sounds: a long-ish trek through some winding trails through a forest, thick with mud anywhere between ankle and thigh deep, depending on where you stepped. 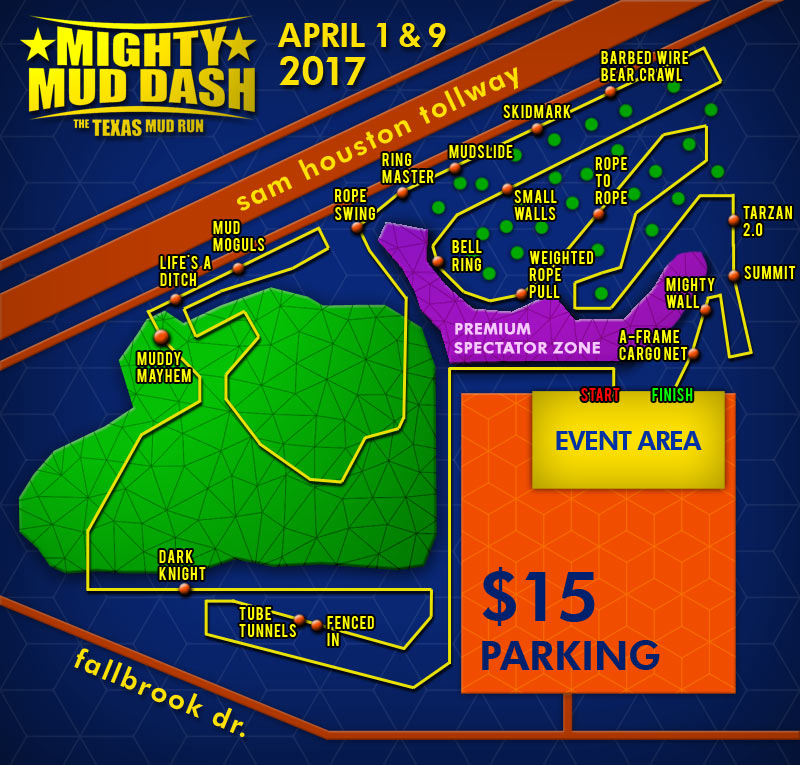 After this – a little less than a mile in – we came to Life’s a Ditch, more muddy trenches with uneven footing to walk through. Long story short, the race wasn’t kidding when it decided to put “mud” in its name. Usually, in running the competitive/elite heat I get to avoid getting too too dirty – the obstacles are typically in pristine condition given we are the first heat of the day – but running in the open heat was a totally different story, and it made it that much more fun! It was a nice change to go out, have fun, and just get muddy for a while. 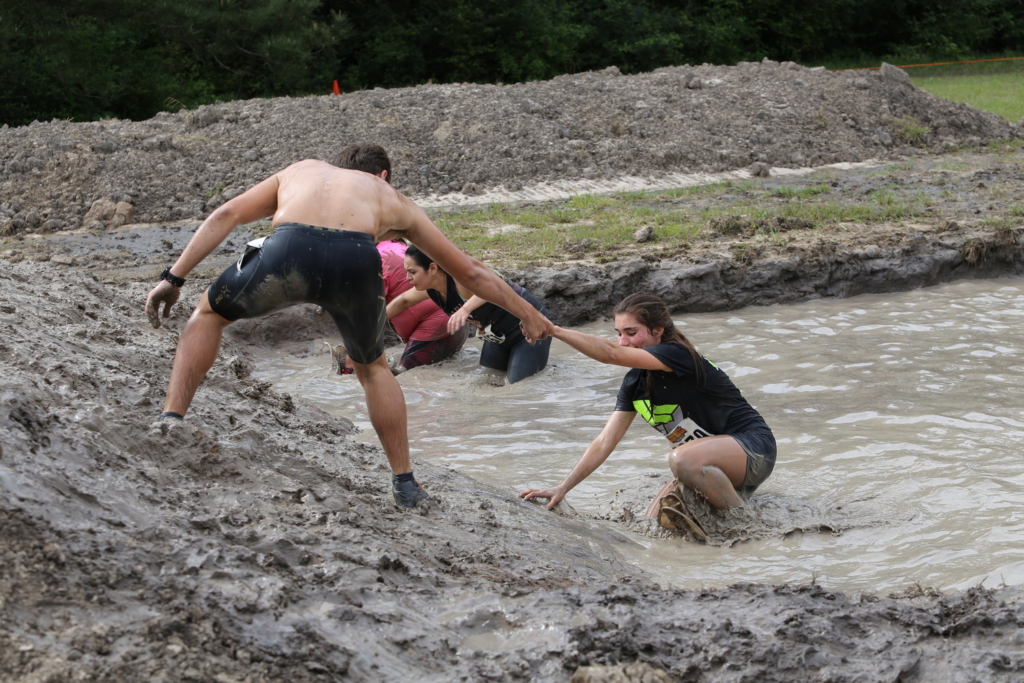 Next came – you guessed it – more mud. This came in the form of Mud Moguls – your classic Rolling Mud from Spartan, only with many more pits. Typically in Spartan there are three or so mounds of mud/pits of murk to go through, but here there were at least five or six, culminating in one final, larger mound that we got to slide down playground-style. Then came running through the woods for Muddy Mayhem part 2, at which point we were emptied out of the woods to reach Rope Swing.

Now they used to have an obstacle like this at Spartan, but it didn’t last long because it was a very difficult obstacle to calculate given the different heights and weights of the people who would be doing it. I myself enjoy the obstacle, but for similar reasons, there was an extremely backed-up line at this point so that Meagan and I had to wait a solid 10 or so minutes until we got our go at the obstacle. Essentially, it’s an A-frame metal structure with a rope hanging from the crest, and as a runner, it is your job to use the rope to swing across a muddy moat and land on the other side. In the competitive division, if you hit the water you have to repeat the obstacle; thus, those would be the rules I would try to apply for myself.

What I learned at this obstacle – from watching a few dozen people before me take it on – is that perhaps the calculations were a bit off on how wide the moat was or how far the swing was. Like I said, this is a difficult obstacle to calculate for, and quite fittingly, when people would swing from one side to the other, they would naturally land hip-deep in the middle of the moat. I realized that, in order to actually make it across without making contact with the water/mud, you would actually have to climb the rope mid-swing and do an L-sit with your legs; hence the back-up in the line, because everybody was landing in the moat. Having realized this, I successfully managed to make it across without making contact, but only barely.

I dismounted the rope and landed on the other side, then waited for Meagan so we could make our way to Ringmaster.

Ringmaster was basically a shortened rig, with a few yellow rings hung from a truss support-system, all over a pit of mud. We made it through this obstacle fairly quickly – and with no line, since people were pretty spread out after Rope Swing – and then headed to the inflatable obstacle, MudSlide (a 20’ tall inflatable slide that deposits you into a 3’ deep mud pit). Next came Truss Rope Skidmark (an extra-tight low crawl between a chain link fence above and mud below) followed by Bear Crawls, the barbed-wire-crawl-esque stretch of mud-crawling under some horizontal wires. Then we ran for a little bit – out in the open, now – until we reached the Small Walls, a 15’ high cargo wall. 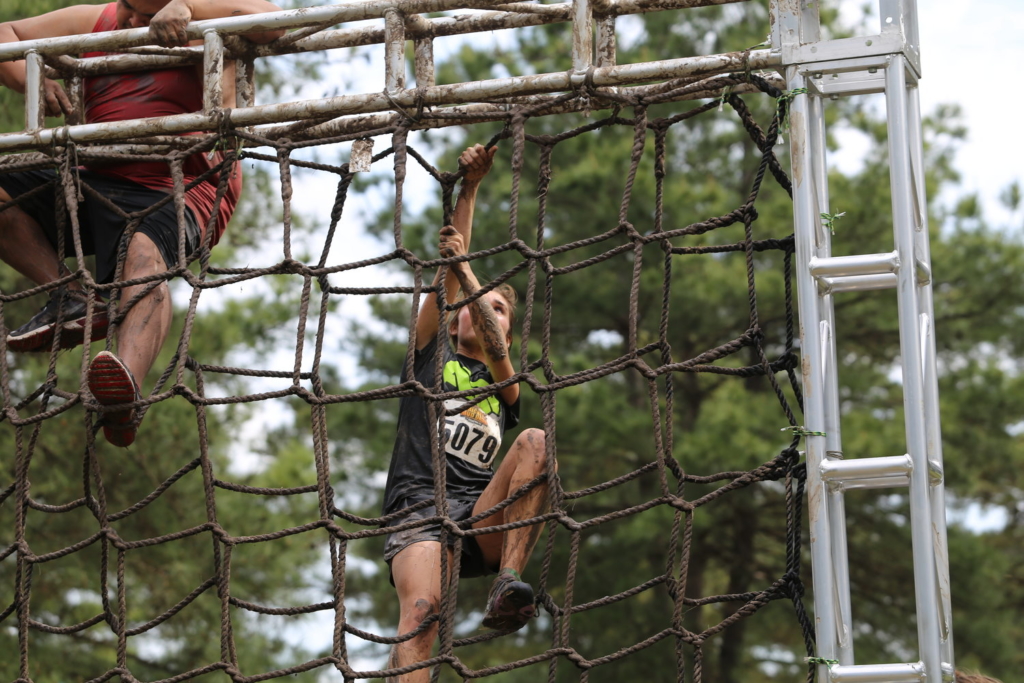 This was a fun obstacle mainly because we got to see the OCR-community at its best. People cheering one another on as they conquered their fears and made it over the wall, people helping each other out and encouraging one another all the way…it was a great time to see that, and often, being so caught up in the racing aspect of things, its easy to miss the special moments like this when people must come together to overcome that which they have never done before. It was awesome to watch, and a nice little strawberry for the day (In case you didn’t know, “strawberries” are “blessings” in my vocabulary). I got to try the flip over the cargo net again, and it once again blew my mind how efficient it was. We made our way on to the next obstacle.

Next came Bell Ring, your typical rope climb. What was atypical about this one, however, was the fact that the rope did not begin until about hip-height, so in order to climb the rope at all you had to have some level of core/upper body strength in order to get at least that high so as to choose whether or not to use your legs. Typically the ropes are much longer, but this was a nice change. The rope was also thicker than typical OCR-ropes, and much slicker (probably due to being later in the day). Twas a good time indeed.

After that came Weighted Rope Pull, which was essentially your discount Herculean Hoist. (I say “discount” not because it was inferior in any way, but because the bags were a bit lighter and, thanks to Mighty Mud Dash being an up-and-coming race rather than the established monopoly like Spartan, the obstacle was obviously less expansive in its set-up.) Then came Rope to Rope, which was essentially a Tyrolean Traverse. 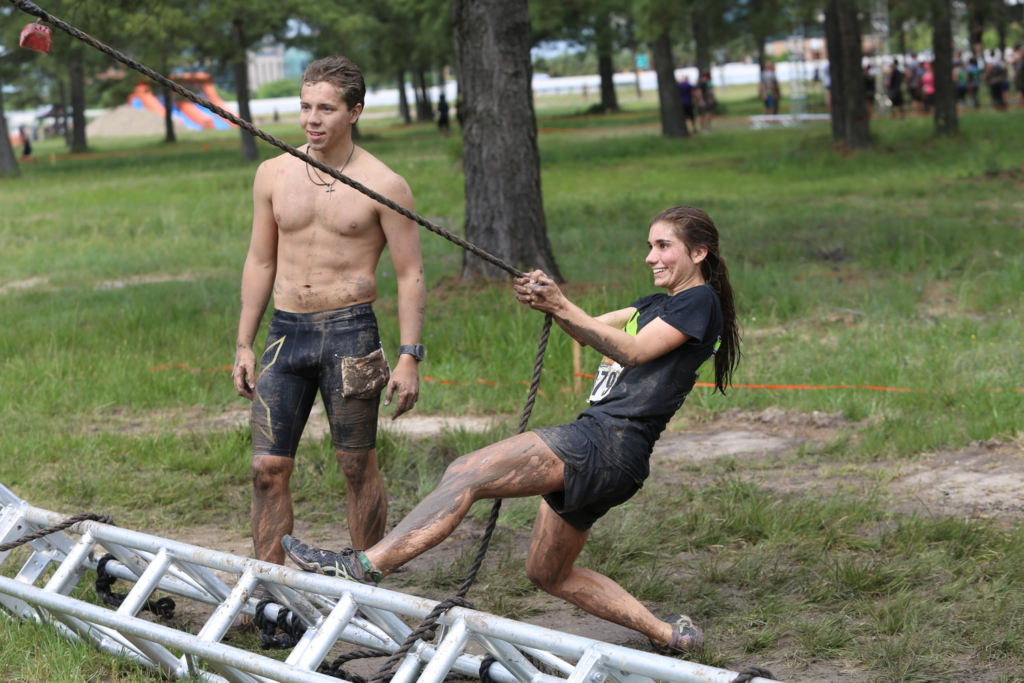 We ran for a bit before reaching Tarzan 2.0, a rig-like system consisting of “suspended wooden walls you must climb across, followed by several suspended poles you must climb to hit the bell at the end of the obstacle” (from their website). This was a fun one, though I will acknowledge that sadly one of their lanes appeared to have broken earlier in the day. 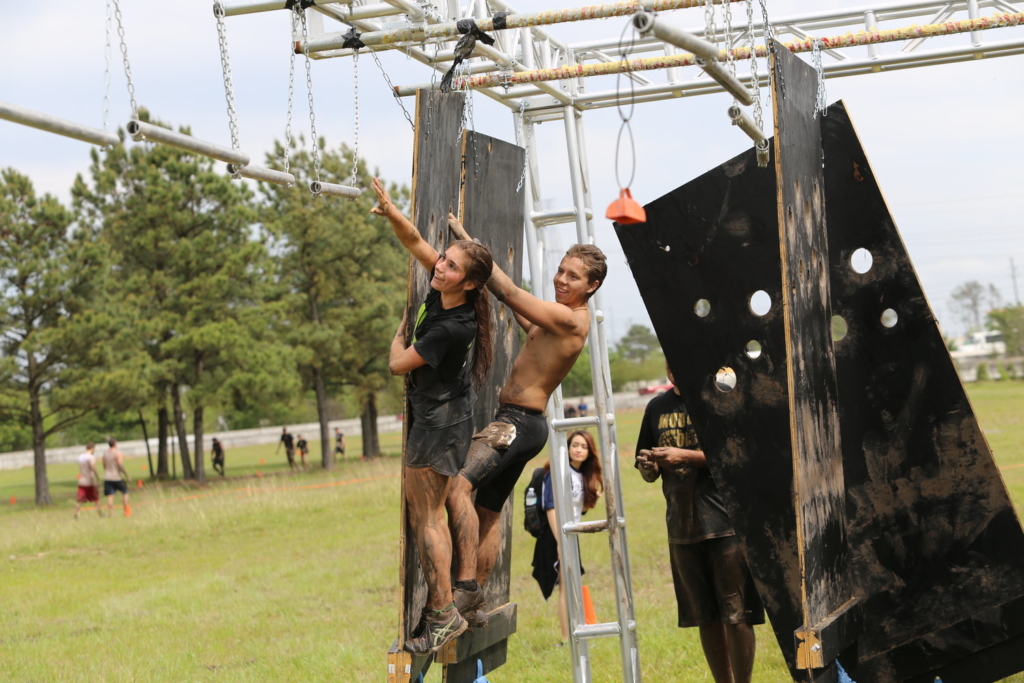 Then we ran around to reach the Summit, a half-pipe/mini-warped-wall like structure that then deposited you to dismount via a vertical cargo net. This was another of those obstacles where we got to see the OCR community at its finest, helping each other up and over the obstacle to make their way to the finish. 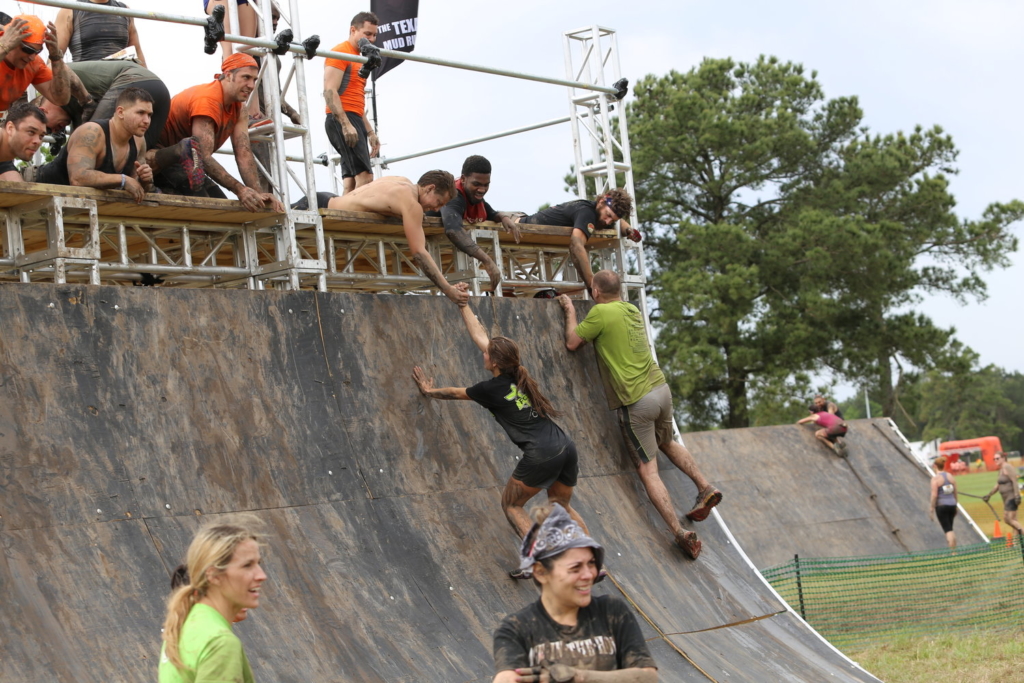 After this came the Sandbag Carry, which had the option of carrying either one or two sandbags, depending on your comfort level (Elites had carried two, so I did the same, holding them jerry-can style). 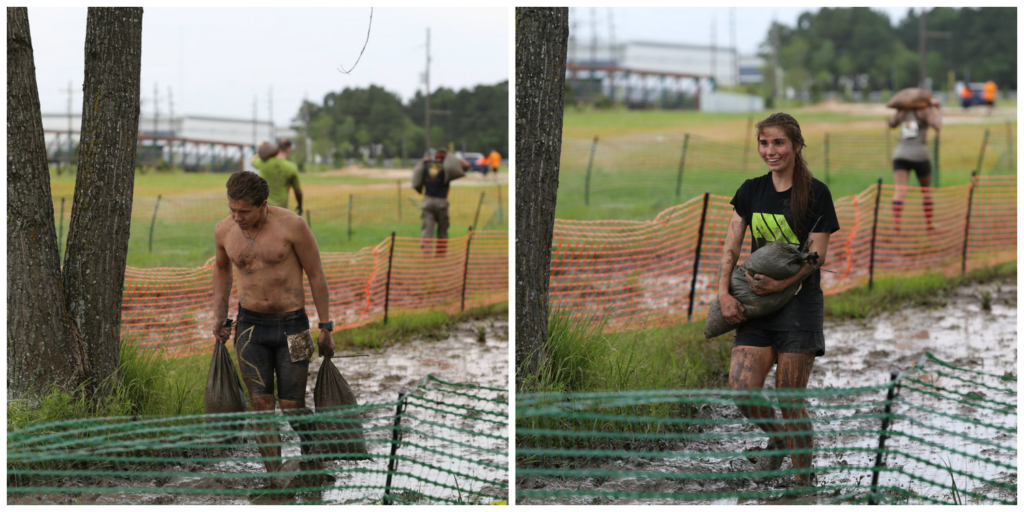 Only two obstacles left: the Mighty Wall (a slanted wall with ropes to help you climb up it, kinda like the Slip Wall without the slippage) and the A-Frame Cargo Net, a ginormous cargo that then left us sprinting to the finish to get accept our medals and some water, along with some drying mud that left us extra-motivated to go get showered and cleaned off.

All in all, the Mighty Mud Dash was a mighty fun time. It was nice to real back and just enjoy the course, something I’ve learned is always beneficial when you’re used to racing nonstop. Seeing the obstacle racing community in its support and enthusiasm was awesome, the venue was great, and there were a lot of interesting obstacles out there that left me pleasantly surprised with how much fun I had. The course was spot-on with its distance of three miles, and everything went smoothly save for the lines at obstacles like Rope Swing, Small Walls, Tarzan 2.0, and Summit (for those who are running it for the fun of it and not to race it, however, I’m sure the lines were a nice way to socialize, catch your breath, and discuss how much fun you were having). The course was a muddy mess but it was a fun muddy mess, and even though I missed my race I’d have to say I had an absolute blast. I didn’t get to spend much time in the main festival

The course was a muddy mess but it was a fun muddy mess, and even though I missed my race I’d have to say I had an absolute blast. I didn’t get to spend much time in the main festival area, but form what I could tell it was pretty lively (you could hear the music and MC even out on the course), and there were a lot of little tents set up with a bunch of good stuff going on. The showers were ahhhhh-mazing, far better than most OCR’s, where you are treated to but water hoses to wash yourself down with. These showers were full-out trusses spewing down jets of high-pressure water, allowing for a quick clean-off that left you feeling almost good as new as you headed back to the changing tents to change into clean clothes. My only complaint is that may a few more showers would be nice, given that the lines to the showers themselves was almost as long as the ones leading to Rope Swing.

But yeah, overall Mighty Mud Dash was a grand ole time. Great race, great venue, great course, great company, and it’s always a pleasure to be able to sit down and reflect on this amazing sport we have been provided with in OCR. I look forward to doing more MMD’s in my future; hopefully next time I won’t sleep through my race.

About the Author: David Tate