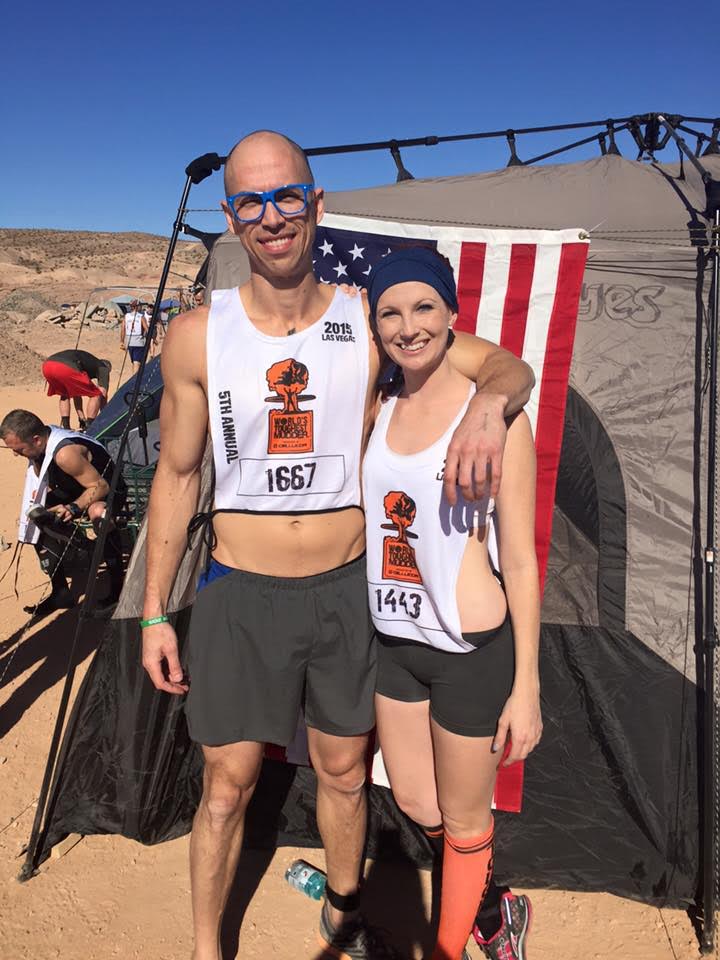 Cassie was first brought to my attention listening to her on a podcast. I have heard her name before, but didn’t truly realize how much of an impact she has had on the OCR world. I don’t want to focus on what she has been through medically, but she has survived more battles with cancer in the last few years, then anyone should ever have to. This has not stopped her being strong, working hard and participating in a number of OCR events. She is strong, humble, has a gentle soul and her infectious smile is amazing.

What was your first OCR race?

My first OCR was AZ Tough Mudder in 2012. I was in a really, really bad place mentally and knew I needed to pull myself from it. The anniversary of my miscarriage was fast approaching, and we had just found multiple tumors in my abdomen again. I knew I needed to do something to get out of my own head, or I'd stumble into the darkness and never find my way out. I don't even really remember how I heard about Tough Mudder, but it caught my attention and gave me something to train for. I ended up running it with my best friend Mike 3 days after having a tumor removed. I was pretty proud when I crossed that finish line – after being knocked out cold by EST. I think to date, that has been the strongest current they've ever had on that obstacle. They set it up so you had to weave through walls, while jumping over hay bales in a foot or so of water. Big thanks to the poor soul that took multiple shots to the head trying to drag me out of the water that day. You're my hero.

In your racing career, what has been the hardest race you have done and why do you feel that way?

I  know GORUCK isn't really included in the OCR world aside from an event they used to have called Nasty – but my Goruck Heavy has by far been the most difficult event I've done to date. It was a 24 hour event that took place on the Rocky Mountain Ridge Line. I have never been so physically and mentally challenged in my life. I'm from Arizona, so I'm used to warm weather and low elevation, so my body went into shock once we started to ascend into a blizzard on the first day, which lead to me hurling on the side of the trail about 4 hours in. I wanted to quit right there, but my pride got the best of me. It wasn't until about 18 hours later when the urge to quit hit me again. My legs felt like bricks and I couldn't feel my feet, and was having to carry a casualty up an incline to our final RP. But then, the sun started to come up and BOB touched my face and I was ready to get shit done and finish the event. My team physically pulled me through those last few miles, and they still pull me through hard times to this day. I wouldn't have finished if it weren't for them – that is a fact.

Is there any race / OCR that you won't do? why is that?

I will never again do another Spartan Race. I've done Battle Frogs, Warrior Dashes, WTM – and they've all been wonderful, mostly because the people are wonderful. Everyone is helpful and says hello, which is why I love them. I can't say my experience was the same at the Spartan, which turned me off from their brand. I'm not competitive, and I'm not an elite runner – so Spartan just isn't my brand of Kool aid.

If you have to look back on your OCR career, what is one thing that has scared you?

The cliff at WTM. I may or may not have cried.

Is there a specific goal race / or challenge you have in mind that you are training for now? If so what is it?

I'm really looking forward to the SISU Iron coming up in April. My mind is pretty focused on that. After that's done, I'll shift to training for WTM.

Is it hard to be in the “public eye”?

I'm not an elite, so I wouldn't consider myself someone that's in the public eye. People know me, but that's just because I really like people. I like making friends and making people smile. And I give all of the hugs to everyone all of the time. My goal is pretty much just to make people smile, especially if they're out on the course having a hard time. I'm not a contender, and I'll most likely never podium, so a prize to me is being able to successfully brighten someone's day.

Do you believe it is harder to participate in an event or be a spectator?

Oh man, this one is tough. I had to sit WTM out this year, so I decided to pit crew for Team FourEyes. It was hard because I wanted to be out on the course so badly, and you're still up for 24 hours – but most of it is just spent waiting and preparing to take care of your athletes. That's more taxing than you would think. But.. it's still easier than being out on the course. So, I think participating is more difficult than spectating.

My joints are hyper extended. What that means is that I can place my hand flat on a table and rotate my hand a full 360 degrees with ease. But it also means I have bad hips and knees – so I struggle with that a lot in these events. They're always popping.

Oh man, this is a really hard one to answer. I'm inspired by people in OCR on a daily basis for some reason or another. Amie Booth and Kelly Allen are my OCR Lady crushes. Not only are they amazing mothers, but they're badass women who have bettered themselves through OCR. I love seeing all they've accomplished and I strive to be more like them every day. Then there are amazing people like Blind Pete, Grant Polson, and Noah Galloway who show me every day that nothing is impossible. But honestly, anyone who has bettered themselves through the sport, or have overcome personal adversity by running these races is an inspiration to me. It's not hard to be inspired by the wonderful people of OCR.

What drives you to continue to race / OCR – is it a need to “feel the fear”, a competitive streak within yourself or?

Honestly, it's just a way to keep myself going. I don't want to become stagnant or complacent or let myself fall into an unhealthy mental state, which is something I struggle with a lot. OCR is my anti-depressant. It saved my life, not only by giving me purpose, but because it has brought the most positive people into my life.

What is the best piece of advice that you have gotten from anyone over the years in regards to OCR, racing, life (this can be anything).

There are so many things I will remember about the experience of BFX 24 from the course itself to the awesome scenery and volunteers to my amazing friends running the course or supporting me. However, one memory from that weekend will stick in my mind forever and that memory will be when Savannah and I were coming down the beach on either my 9th or 10th lap and we saw you walking the beach alone collecting shells. We asked you what was up and you responded, “I've never collected shells on the beach before. I just wanted to do that once.” I don't know what it was about that statement but it's really had me thinking ever since. How many little things in life do we do or not do that may seem insignificant but in reality are just as if not more important than what we feel are the big things. Sometimes small things like collecting shells on the beach can mean more than we ever could imagine. I think what it really made me think is – don't take anything for granted no matter how small. Be thankful that you can do simple things like that or difficult things like running a 24 hr race. You are a beautiful, strong and inspiring person. I am thankful to have had the opportunity to have met you. Keep up the fight and don't lose that smile.” I was sent this message after BFX24 and I've held it close to my chest ever since. I love that such a small moment could impact someone so deeply, and I love that he realized that the small things in life can sometimes mean the most. Don't take anything for granted.

Cassie Harris – I only have a FB that is public, and can be found by searching my name