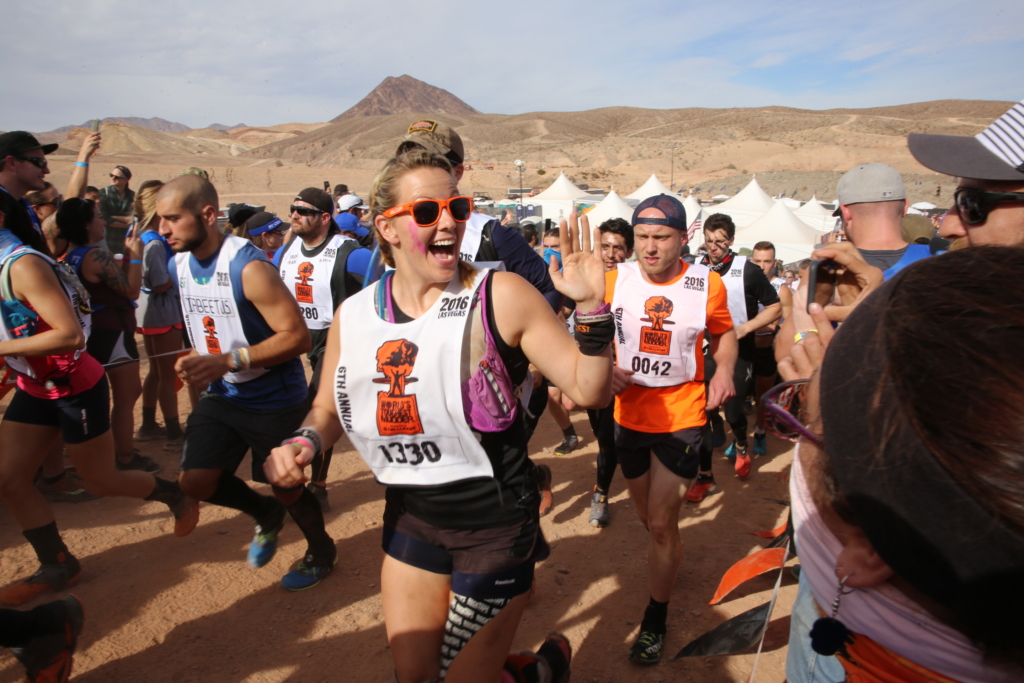 It’s another month, so there’s another announcement about the exciting new things that are going on the in Tough Mudder world! At some point, we’d expect the dust to settle on all these new race formats, opportunities for competition and the format for World’s Toughest Mudder, but for now, we will continue drinking from the fire-hose of excitement!

Tough Mudder made a major announcement today to include 4+ person “national” team relay format to World’s Toughest Mudder! There are even cash prizes for the top 3 teams! This is in addition to the formats that were present last year: male, female and 2+ person teams. This 4+ person relay format is something they hinted at two years ago, but didn’t follow through on. Now we have more concrete details that look like it’s set in stone for 2017.

How the “national” team relay format works is that the entire team must run together for the whole first and last lap of the competition. During any other lap, only half of the team needs to be on course at a time. In past years, the team rules have been that each participant must cross the timing mat within 1 minute of each other, forcing people to actually run next to each other. With the relaxed requirement that half the team runs at a time, the other half can be resting and sleeping so that when they’re on the course, they can push the pace. This will be a recipe for gigantic mileage. Perhaps we will see 125+ team miles this year.

One important caveat: applications for National Teams must be completed by August 1st, 2017!

Also, for a 4+ relay or 2+ non-relay team to qualify as (elite) contender, every person must have earned that status.

The additional facet to the team competition is that this is built for national teams. During registration, the team will select the nation that they will be representing and they’ll get a specialized national team bib. Multiple teams per nation will be allowed, but not multiple nations per team. Given that Chad Trammell and Robert Killian were Team America last year, and there was a 5-person team from Germany that split up last minute, I highly expect American & German teams. The question is if Team Australia who won second 2 years ago will re-emerge.

One hot topic has been how can people outside of the US & UK qualify as an (elite) contender without competing in a Toughest Mudder. Firstly, waivers are not available for an elite contender. Waivers, however, are available for contender status and are at the discretion of WTM Race Officials. You must register for WTM prior to applying for this waiver, and you must submit your application before October 20th, 2017. Some sample prerequisites that suggest that you might qualify for a waiver include ever earning a 50+ mile bib at WTM, having completed 25+ Tough Mudder events, or relevant performance at another OCR or endurance event.

The other details are that they changed the secondary achievement awards. For many years, people who ran 75+ miles and 100+ miles earned a season pass and WTM entry, respectively. Last year, the top 10 individuals earned both a season pass and WTM entry. Now individuals or 2+ non-relay teams who run 75+ miles get entry into a Toughest 2018 but no season pass. Further, individuals or 2+ non-relay teams who run 100+ miles get a 100-Mile Club Orange Jacket, but no other prizes. There do not appear to be any non-monetary prizes for top 10. I expect that the money that went to these down ticket prizes probably was repurposed to fund the 4+ person relay team. As someone who earned a season pass from running 75+ miles three years in a row, I’m going to need to step up my game to keep earning Tough Mudder perks.

In other news, there will be a Black & Orange Jacket for the Male and Female who hold the record for best WTM performance. Since both Ryan Atkins and Jon Albon finished 105 miles before Trevor Cichosz, it’s unclear which male will be awarded the record-holder jacket. Amelia Boone currently holds the female record for 90 miles in 2012. That was a crazy year and wasn’t known for high mileage so if she’s in that shape again this year and this year is mild, that record is achievable. Given her status coming back from a devastating injury, no one knows if she’ll be around to defend it or if someone will even come close to that high bar this year.

Of course, in true Tough Mudder HQ form, it’s currently April so we have many months until November. I fully expect this will not be the end of rule clarifications, if not downright rule changes. We will be eager to see how things shape up moving forward.

For one, there has been clamoring to give the ladies a reason to team up. Other than the absolutely amazing females who could win it all as an individual, it’s not beneficial for women to join a team because there are lower profile men that can run just as far. It’d be exciting to see some sort of team format with a female requirement. For the national team relay, it’d be interesting if half the team had to be female. For the 2+ person team, it would be intriguing to see how many couples could compete with the McBride’s. If you put the cash incentive there, a Ryan Atkins and Lindsay Webster could be attracted to that division.

The other major omission is the lack of age group categories. It’d be very interesting to see a Master’s category out there to recognize the 40 or 50+’ers that are putting down the crazy mileage. My birthday is a few months after Trevor Cichosz (we’re 30), so I don’t expect to get a benefit from any Master’s category no matter how old I get, but I do enjoy watching and appreciating.