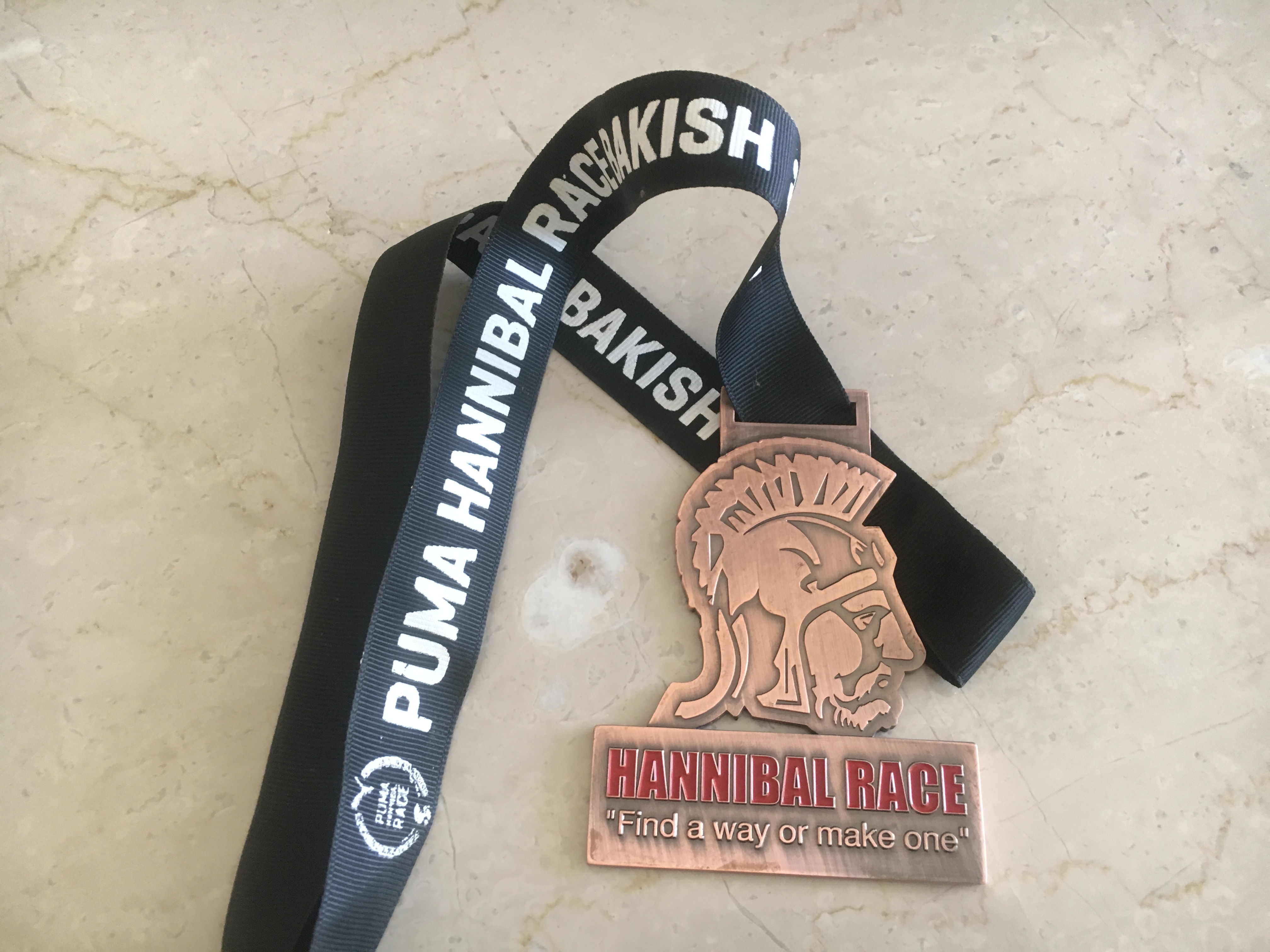 Finisher medal for the Hannibal Race.

Lebanon’s first OCR World Championships Qualifying event, the Puma Hannibal Race, took place last weekend in Le Plateau de Bakish in the mountains east of Beirut.  My Conquer The Gauntlet Pro Teammate Brenna Calvert and I had the pleasure of attending the event to see what OCR looks like in the Middle East. 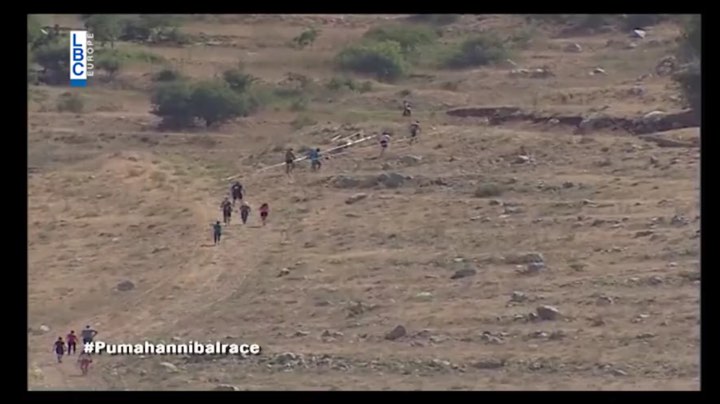 Overhead view of the start of the race from the 3 hour live broadcast.

The terrain was very challenging not only due to elevation gain but also due to its rocky nature and flora.  The first mile of the course was all uphill spiking your heartrate and separating the field.  The rocky terrain made it hard to get up to full speed and required your utmost attention when running.  The most difficult part of the terrain was the sharp, spiky plants which punched through my Icebug shoes irritating my skin.  The plants definitely required me to apply some mental strength to ignore all the little spikes so I could continue running at my max potential. 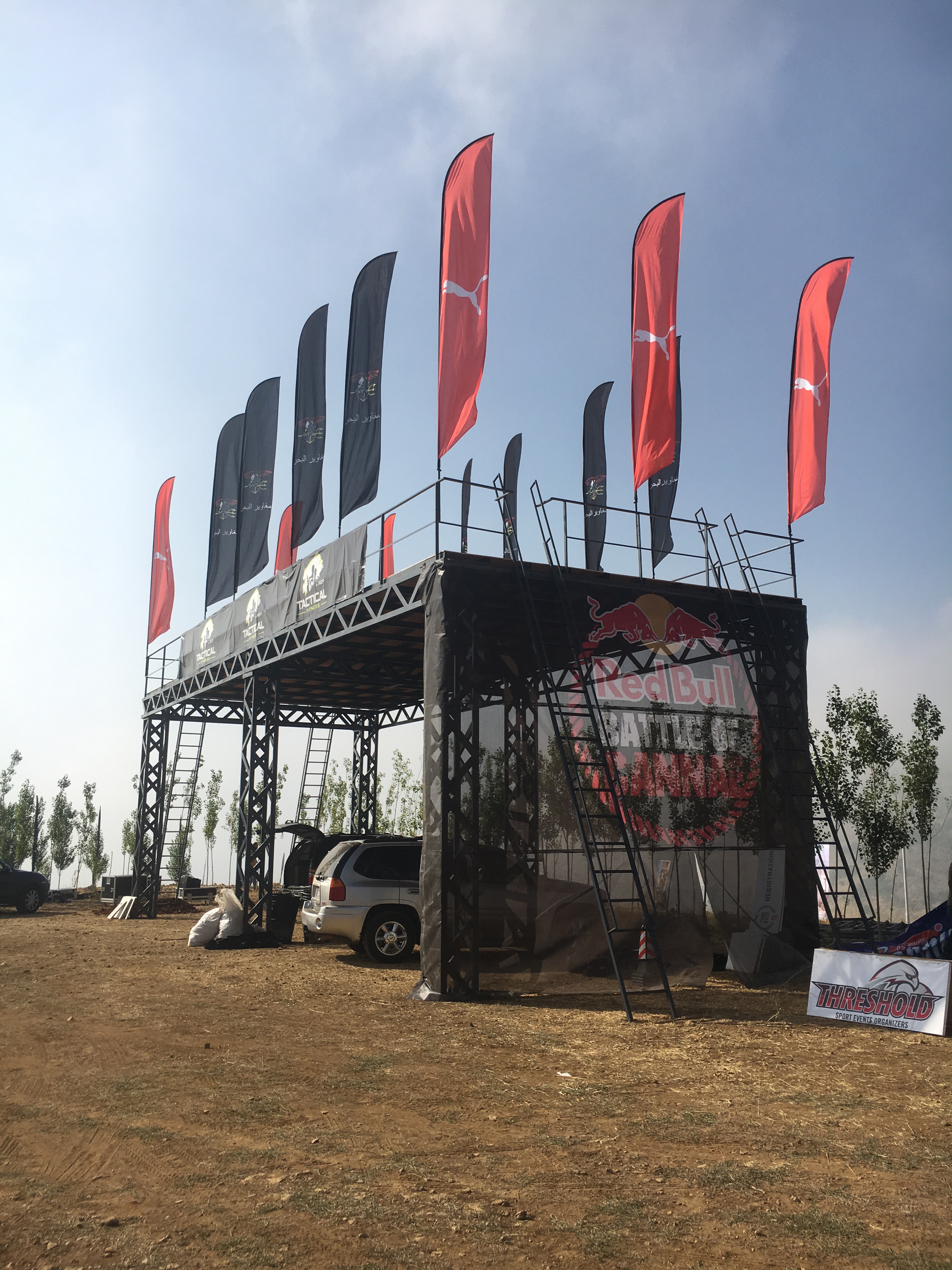 Battle of Cannae ladder climb over the top and rope climb underneath (taken during pre-race setup, cars would move on race day.)

Obstacles included monkey bars, rope climb, quarter pipe, low crawl, muddy low crawl, traverse wall, tire climb, an enormous A frame cargo net, large slip wall with ropes, 8-foot wall, quintuple steps, a fire jump and several others totaling 30 obstacles over the 8km course.  The obstacle layout was great with the first mile being obstacle free preventing backups and lines.  The obstacles themselves were very well built and were without any major issue.  Furthermore, there were obstacle attendants at every obstacle, which was great to see.  The final 200m had a gauntlet of obstacles called The Battle of Cannae.  This made for great viewing by the spectators and television cameras as athletes conquered 10 obstacles with no break.  Overall, obstacle difficulty compared to US series was harder than a Warrior Dash and about the same difficulty of a Rugged Maniac.

Some highlights from the Hannibal Race's afternoon waves.

(Video from Strength & Speed showing festival, obstacles and area from the afternoon waves.)

The festival was fantastic and was full of athletes taking pictures, laying on the grass and even some acro-yoga.  Red Bull is one of their sponsors and they showed up with a truck that transforms into a mobile DJ stand.  Loud music (in both Arabic and English), a large patch of grass for lounging, team tents, a booth selling food, free Red Bull, and sponsor tents made this similar or better than most US series.  The festival was comparable to a Rugged Maniac or Savage Race Festival.

The price is insanely cheap.  It roughly comes out to about $35 in US Dollars for race entry even for day of the race.  With prices like that, you can’t really complain about anything.

Aspects Better than the US:

The Hannibal Race gets 3 hours of live broadcast coverage on LBCI (mostly in Arabic), a major network in the Middle East.  Of the six races they have held, all but one were broadcast in a similar manner.  While we here in the US get excited about getting a time slot on NBC Sports, Lebanon may be the leader in the world on television coverage for OCR.  As far as I’m tracking, there is not a single other country that does live broadcasts, let alone a 3 hour time slot. 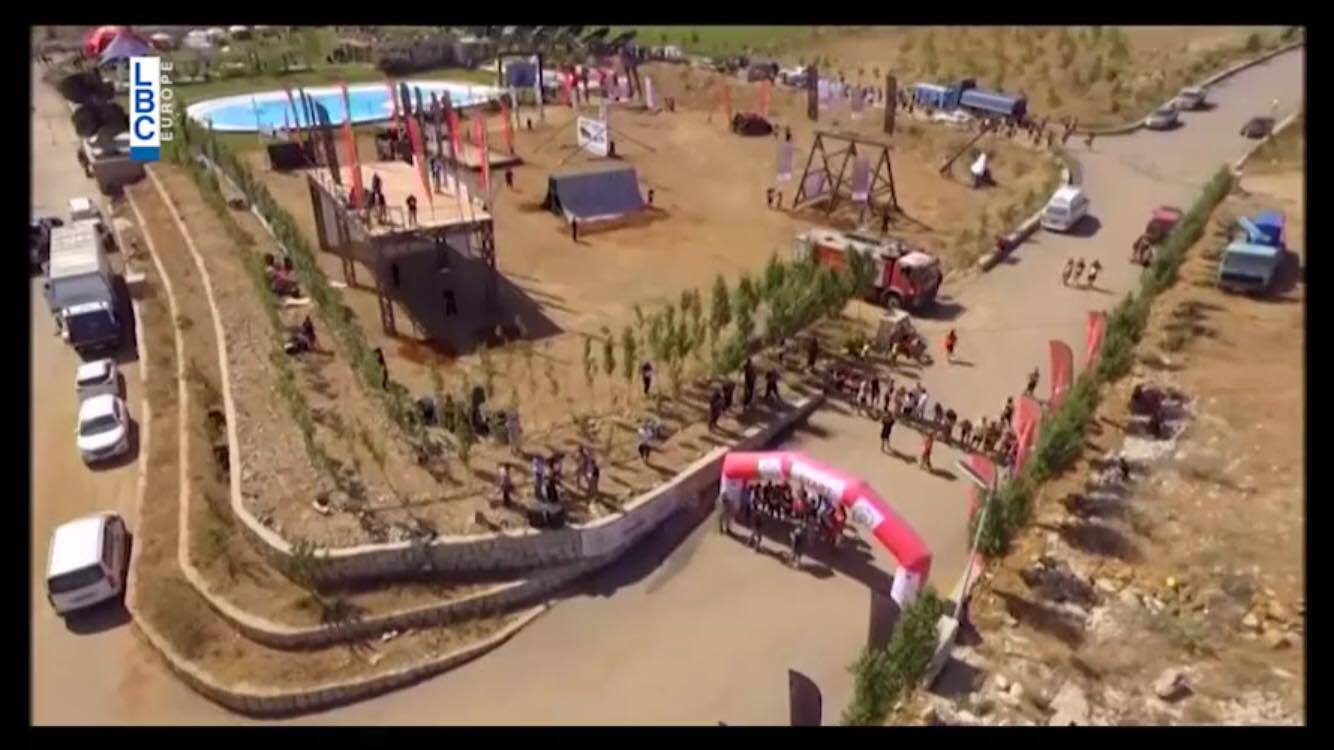 Battle of Cannae and start line overhead view from the live broadcast on LBCI.

Aspects Worse than the US:

The only thing I really thought was missing was a merchandise tent.  After traveling from the US, I would have bought one of everything in the merchandise tent…but there was none.  Luckily, Brenna and I still walked away with a t-shirt and rubber bracelet but it had to be acquired on the side, there was no booth for the general population to purchase one.

For elites, the only negative was there were multiple elite waves, which meant your finishing placement on your wave might drop later in the day as other athletes took to the course.  Not ideal, but it does make you push hard all the way to the finish regardless of your wave position.  This meant the results came out the following day, which is great because it allows the officials to ensure all athletes performed to course as directed, but means there is no award ceremony the day of the event.  However, an award ceremony is done later in month, which also includes press coverage from Lebanese papers and television crews.

View from an American Perspective:

If I could magically transport you to the race, you wouldn’t even be able to tell you were in the Middle East.  Athletes were dressed the same way you would see in America.  The only thing that would seem out of place was a decent sized presence of Lebanese Military, which were there because they are one of the main sponsors of the event.  They even have a military only wave to showcase their best Soldier-Athletes. 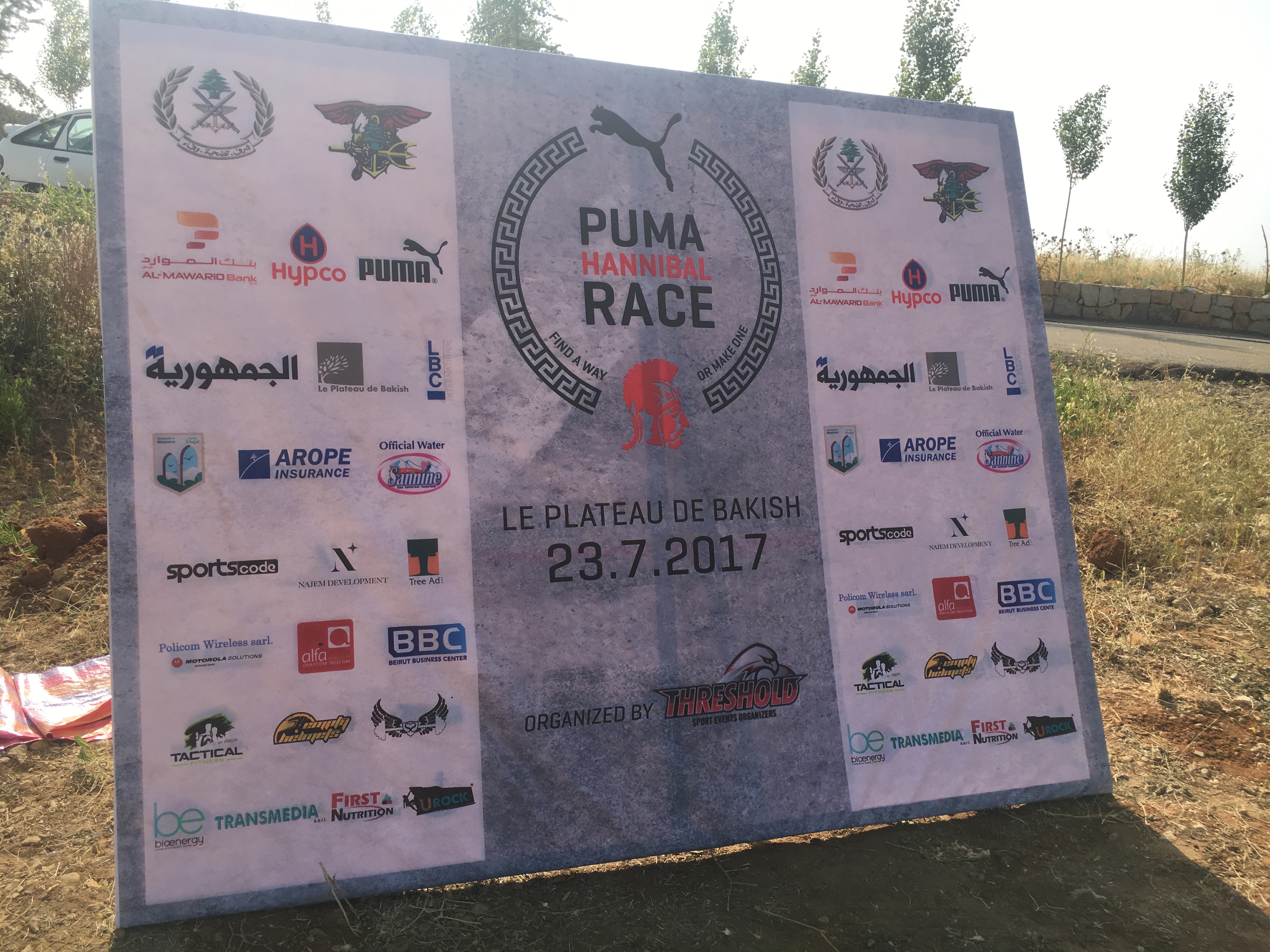 Sponsors for the Hannibal Race

The Hannibal Race is Lebanon’s only OCR series, typically holding 2-3 events per year in Lebanon and occasionally holds events in the Kingdom of Saudi Arabia (a challenge that their owner described in detail on the Strength & Speed podcast).  This was my third Hannibal Race and they continue to make big improvements from race to race, despite this being only their 6th event.

For the American Mud Run Guide followers, if I had to compare it to a US series it reminded me of the terrain of a Spartan Sprint with obstacle difficulty/similarity of a Rugged Maniac and the festival of a Savage Race.  The race was great but the overall experience of the entire trip to Lebanon was phenomenal and something I will never forget.  Hopefully, I will get the chance to attend another one of their events sometime in the future.

The event was an outstanding success, and several athletes reported their intention to attend the OCR World Championships held in October in Canada.  It was unbelievable to be at the race to welcome another country into the global OCR community.  #OCRunited 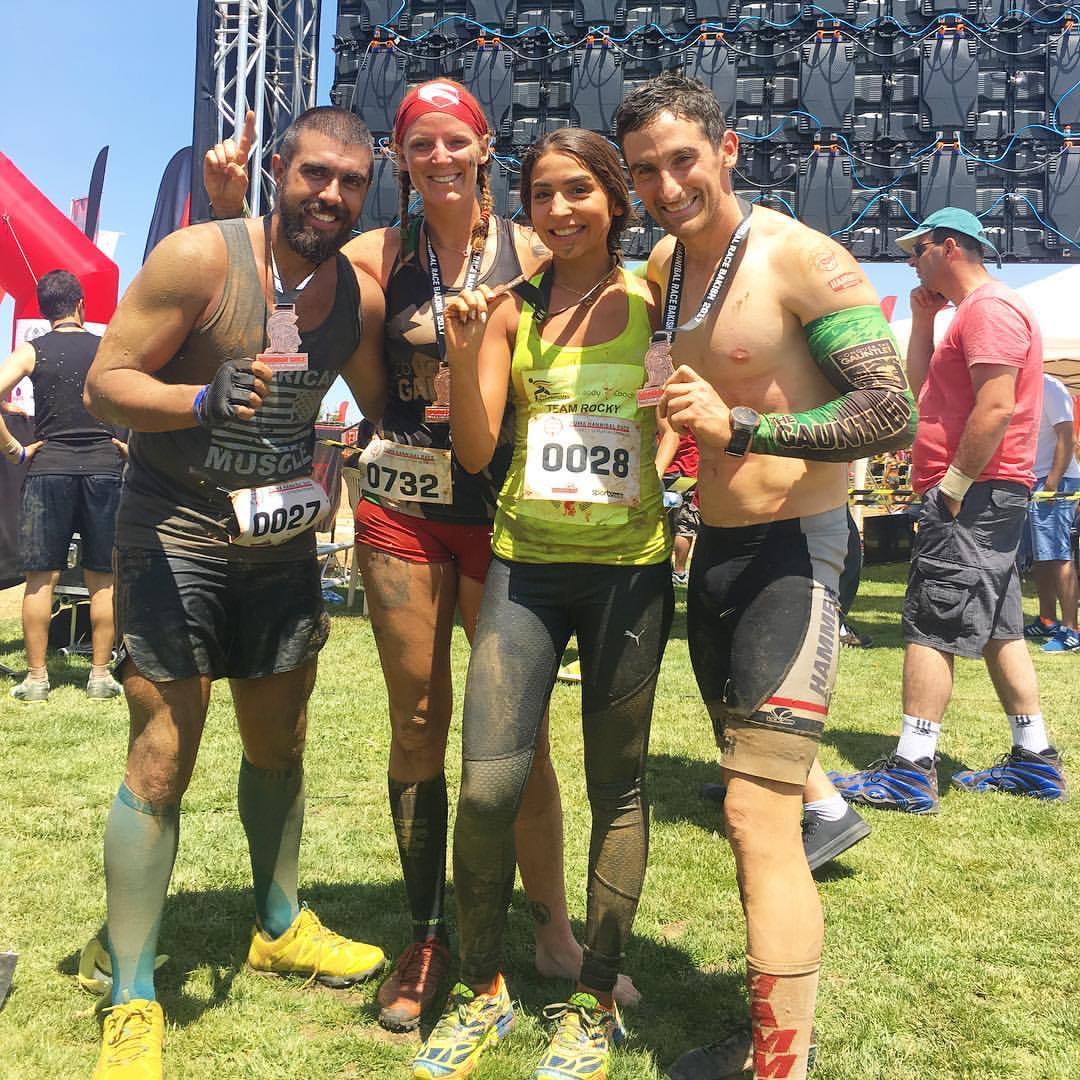 If you want to know more about Lebanon’s OCR scene or the Hannibal Race, subscribe to the Strength & Speed podcast via iTunes, Stitcher, Podbean or Google Play.  Episode 20 has an interview with their co-owner Amine Dib, a renowned fitness icon in the Middle East, and there will be two more follow up episodes.  In one, Brenna and I will talk with Lebanese athletes and in the other Brenna and I will discuss our overall experience sightseeing and racing both scheduled to come out in August.