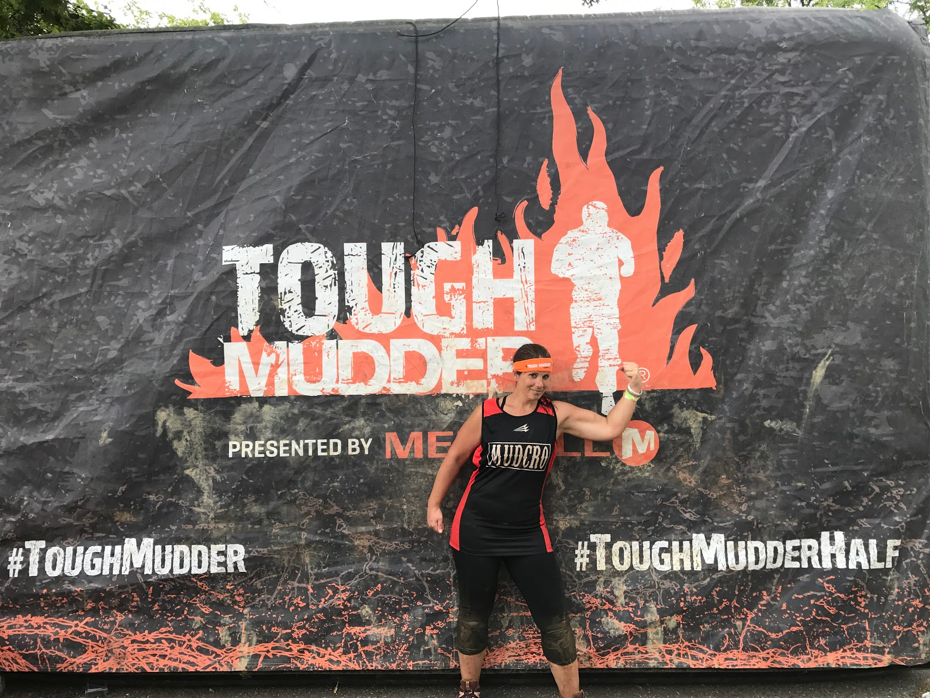 Tough Mudder asks, “When Was The Last Time You Did Something For The First Time?”

I am going to take it a step further and add, “When was the last time you TRULY felt like part of a team?” For me, the answer is this past weekend when I ran Tough Mudder with my friends from Sons of Mudarchy. Tough Mudder isn’t just a race; it’s a chance for you to bond with your fellow Obstacle Course Racers. Even if you registered and showed up to the race alone, during a Tough Mudder, you are part of a course-wide team the second you cross that starting line. At the event on Long Island announcer, Sean Corvelle reminded us all how lucky we were to be able to wake up and race as he had us bow our heads for a Tough Mudder builder who was supposed to have been getting married that day but had died recently in a motorcycle accident. His picture hung over our heads, and an American flag was held under it as we all started on our way. 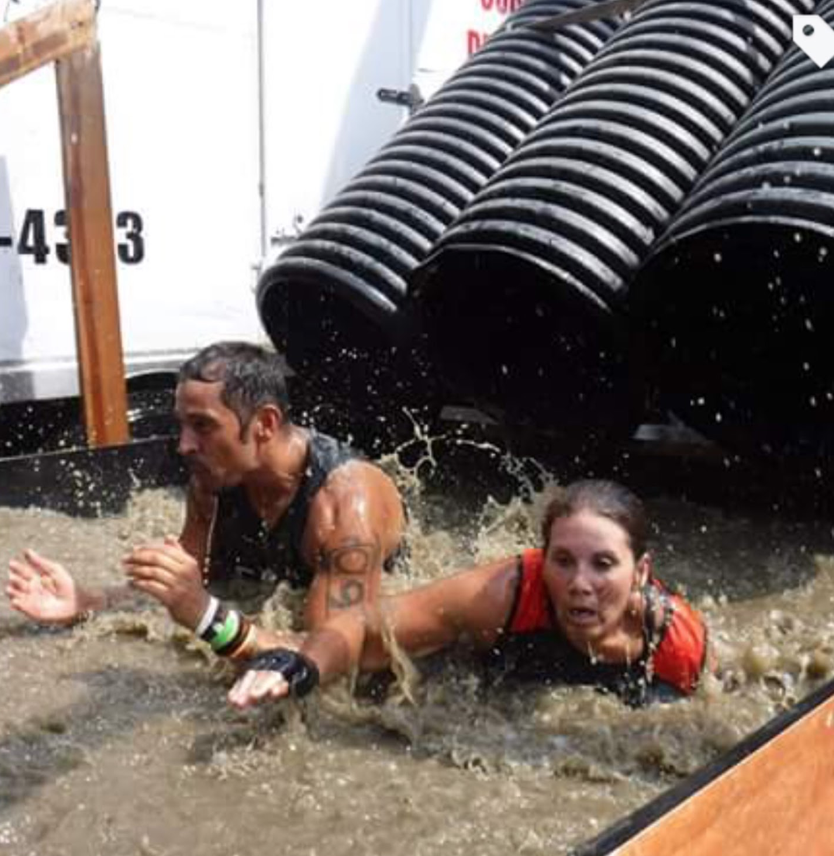 This course was full of trail runs. I ran with a group of about 15 people, and we stuck together the whole time. Some of us may have been a little faster than others, but we started as a team, and we knew we were going to finish as a team. This mentality is what makes Tough Mudder different from other races. I have done many different OCRs over the years and never have I seen more people in matching shirts sticking so close together. The obstacle called Hero Carry ensures that you are not alone as the objective is for two people to carry each other.

One person carries their partner, and then there’s a switching point where the carrier then gets carried. I was worried that I would not find anyone from my team that I could lift and who could easily lift me. There was another woman on my team who looked to be about my size, so we gave it a shot and completed the challenge together.  Seeing husbands carry wives and then wives carry the husbands was amazing. When you are faced with a task like that on a course, you make it happen no matter what! Pyramid Scheme is another obstacle where teamwork is a necessity.

It is a slippery sloped wall that you get up by having people form a human pyramid to pull people up. I’ve seen people walk on shoulders to get up, but my team had a great strategy. They formed a human triangle and used their hands to pull each other up. Then at the top, someone waited to pull their teammates up to the platform. People were pulling racers up from other teams and making sure everyone made it over the top. 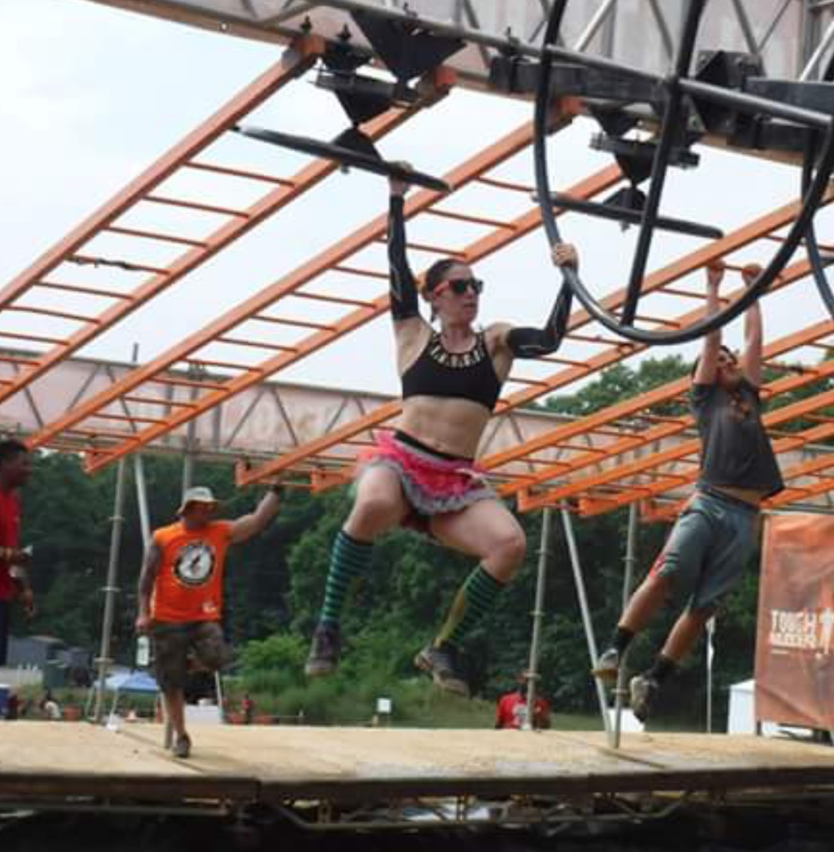 There are no penalties for skipping an obstacle at Tough Mudder, and if you enjoyed an obstacle you could get right back in line and do it again! We did this at a few obstacles. I was terrified to try Arctic Enema where you have to go down a tube into an ice cold pool of water and then swim under a tire and hop out. This was so much fun we did it two times and the second time we sat around in the water taking pictures. Another one that we enjoyed doing multiple times was The Block Ness Monster. This also takes teamwork. You go in muddy water full of huge blocks that you turn to “ride” over to the other side. People on one side push while people on the other side help pull you over. The new Tough Mudder book is called, “It Takes a Tribe, ” and this obstacle definitely could not be done without your tribe! Since Tough Mudder is not a timed race people feel less pressure to finish quickly and I found that anytime I needed help exiting an obstacle, here was always someone willing to wait and lend a hand.

I ran with a lot of Ninja Warrior lovers so we stayed and played around on Funky Monkey a long time. I can’t yet do monkey bars so I fell right in the water but it was fun watching them do the bars and the spinning wheels many times over. They were trying different techniques and we cheered everyone on as they made it across each time. There were not many walls and the ones they did have had blocks or ropes to help you up so people of all levels could do them. Even though I did not need help on these obstacles being with other people felt so different than running alone because while I was climbing they were all yelling out encouraging things. I was proud of myself but knowing that I had other people with me who was also proud of me put a smile on my face. 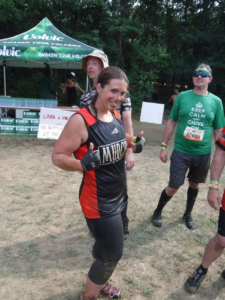 Now the thing that may have scared me the most was the thought of doing Electro Shock Therapy. When we got there I saw it and Kong was right next to it. Apparently, you don’t have to do it if it is your second time running a Tough Mudder so everyone on my team headed straight up Kong. I followed them up and then quickly realized this obstacle consists of rings spread over a huge inflatable mattress. As I mentioned I can not yet do monkey bars nor can I do rings. I froze. Everyone on that platform was trying to make me comfortable and being very patient.  I finally grabbed a ring and then immediately fell straight down onto the mattress. When everyone on my team was done , we saw a sign that said, “You are almost done..only ¼ mile more.” I was confused. Done???? What about getting shocked??? Now I WANTED to do it. So they explained that we didn’t have to do it if we were Legionnaires which is someone who has done at least one Tough Mudder before. Yes, I had done a Tough Mudder before but it was only a half and it did not include the shock obstacle. So I decided I was doing it. I walked up to the beginning..got a pep talk from the volunteer and I RAN! Right before the end I tripped over a hay bale and landed face down in the mud. I got up..got out and realized….I didn’t get shocked!! I have no idea how it happened but I felt nothing. I felt cheated. But not cheated enough to go and do it again as my team mates suggested. So off we went through the woods to finish up our race. 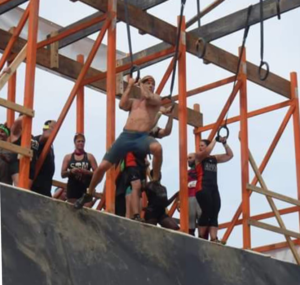 In all, we were on the course close to 6 hours. It took me as long to finish this as it did the Spartan Super. And even though they were both roughly the same distance, 9 miles, difficult terrain wasn’t the reason why this race took so long.  This race took so long because my team and I were enjoying ourselves and doing many of the obstacles over again. I was out there so long having FUN, and helping people. And waiting for my friends to finishing playing on the obstacles too. This is definitely a race everyone should try. There is no pressure to finish fast, there is no pressure to be “better” than anyone else and everyone is out there to have a good time and show good sportsmanship. I am already registered to do another one in October!

Tough Mudder plans ahead for their athlete's comfort. The day started out really hot and even though the inclines were not that steep I got overheated pretty quickly. I was so happy to see that Tough Mudder has more than enough water stations along the way. This particular course had about 5 or 6 and one of them even had juice with electrolytes in it. Near every water station, there were also porta potties and one water station had bananas and another had delicious Vega chocolate peanut butter bars. Tough Mudder definitely makes sure their athletes have proper hydration and nutrition on the course. One other great thing to note is that Tough Mudder athletes are clean along the course! All of the water cups ended up in the big dumpsters and the ground was not littered with GU packs or anything like that. But maybe this is because they were saving all of their garbage for the rinsing off station. This area was littered with garbage and clothes people did not want to take home with them. Let’s not leave garbage behind anywhere at a venue. Make sure you bring extra garbage bags to bring home your muddy clothes. We were respectful of each other on the course let’s be just as respectful to the venues that allow us to come and indulge our healthy addiction! So grab your neighbors, friends, family, coworkers or just come alone and Do Something For the First Time!! See you on the course….. 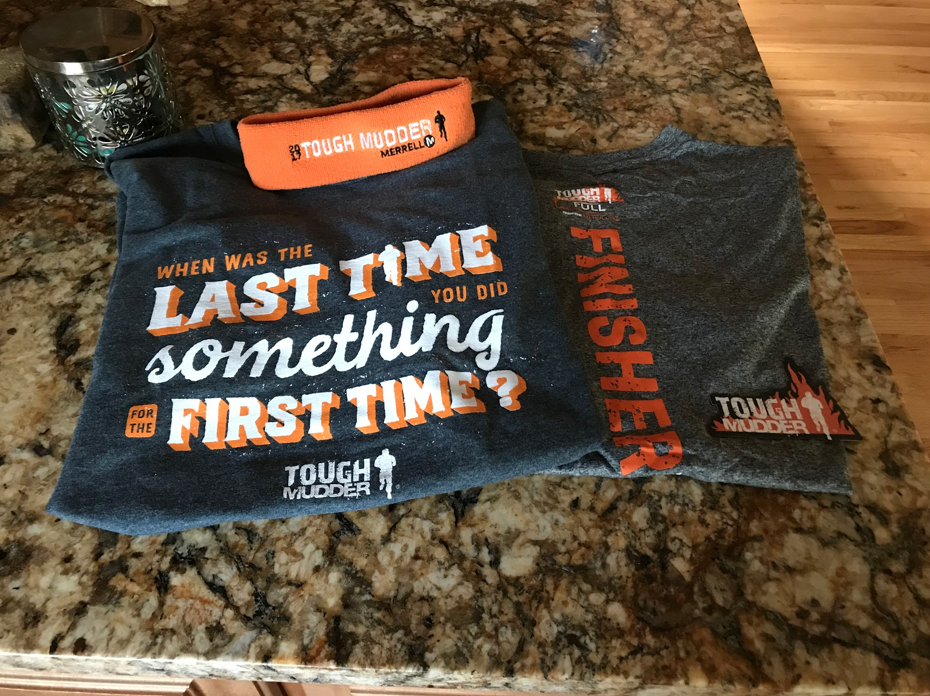