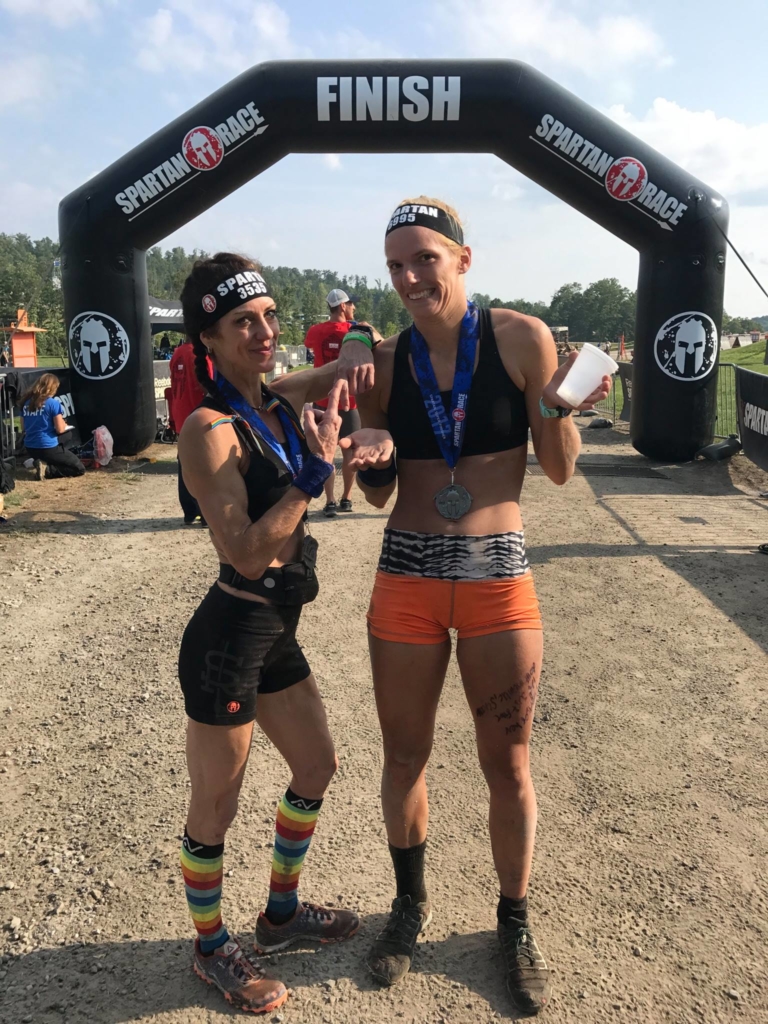 Our friends over at BROCR were behind the scenes at the recent Spartan Race in West Virginia. They recently shared the story behind the story of the epic finish line over the weekend between two of the female athletes. The story is below.

We were behind the camera covering the Spartan Race West Virginia Super on Sunday. We caught the dramatic burpee-off between Nikki Justice and Amy Parrish Bortoff for first place (Nikki would emerge victorious). We also captured the video of the dramatic finish for third place when Alex Sawicki came screaming in to the finish at 88 miles per hour, passing Amy right before the fire jump, as Alex secured the final spot on the podium.

It was an AMAZING race and these women should all be commended for putting forth a SPECTACULAR performance!

But there are people who have been bashing Amy for “giving up” so close to the finish line… which, if you know Amy (like we do), is the furthest from the truth. In Amy's own words;

“Watching this video it's easy to come up with a multitude of comments and critiques [of my performance]. It looks as though the woman in the video gave up. We all look back on races and wish we had changed on step, one grip, one climb, one stop for hydration… Unless you were there for every step that was taken… you will never know exactly what took place.

So many things were happening at once [at the finish line on Sunday], it was so exciting! I unzip my belt to grab a hand full of confetti, and as I'm just starting to jet towards the fire jump, here comes Alex flying off the Rig in full sprint! She zips by me like a bolt of lightning as we jump the fire and hit the timing pad!! It was incredible!!!

My final ‘ooops' was thinking the fire jump timing pad was the finish… so it appears in the video that I ‘gave up'… NEVER!!!! I quickly look forward and see there is a second timing pad [underneath the arch] and sprint to it [which the video doesn't show].

I came so close to such a HUGE win!! But I'm not disappointed in my performance. I hold my head up high and smile because I ran 3 solid races [that weekend]!”

It should also be noted that Amy and Alex are not only fierce competitors, but friends, too. We reached out to Alex to discuss what happened that day and the comments surrounding the video and here is what she has to say;

“The comments have either been uplifting or upsetting. Anyone who has a single negative thing to say about Amy ‘giving up', ‘slowing down', or ‘not wanting it' has obviously never met her and doesn't know what kind of racer she is. Unfortunately, that video doesn't show who she is as a person or racer. Don't let the glitter and rainbow socks fool you, she's got a mean race face and she races HARD every time she's on a course so ‘giving up' was not what she was doing. That's what I love about [Amy], she can be a fierce racer but has the ability to laugh at herself.

After the finish, this is the kind of situation where [Amy] could have been pissy, nasty, upset, cursed a bunch, and just walked away from me. She did the exact opposite [see pictures attached to this post showing Amy is THE BEST at being a true sportsman!], she was the second person to come up to me while I was rolling around [in pain] in the dirt, Tyler McCredie [her boyfriend] was the first, and she congratulated me heavily and even made a joke about the confetti and covered me in some of it which I thought was hysterical. [Editor's note: Amy asked for the photo with Alex to commemorate her performance.]

After seeing all the comments on social media I have to agree with what Amy says, the world needs to throw more confetti and less stones. She's a human being, cut her a break.”

All of us at BROCR are impressed with the raw athleticism displayed this past weekend in West Virginia, as well as the sportsmanship displayed by these two athletes. We are always proponents of building each other up and detest negativity. We agree wholeheartedly with Amy in that the world should throw more confetti and less stones!

About the Author: BROCR Media