November Project – How it’s made me a stronger, faster OCR Athlete As we enter into the final weeks of 2017 many of our OCR seasons are coming to an end, if they haven’t already.  This is a great time, as many of us do, to reflect on the goals we set out to accomplished. Did we meet those goals? Did we exceed those goals? Did we come up short and if so why? For me, it’s also about looking forward. I like to set goals for the offseason as well. Where can I improve? Maybe it’s finally getting my spear to not just hit the target but to stick. Maybe it’s working on endurance, or mobility, crushing nutrition, increasing grip strength. The possibilities are endless. Personally, I’ll put a pen to paper within the next few weeks and layout the goals I want to achieve in the offseason.

For those who want to mix up their training, increase their endurance, brave the elements (because we do this already) and have fun…let me introduce you to my secret weapon. November Project.

For those of you who know about November Project (NP for short), you know how amazing this community is. For those who have no idea what the hell I am talking about, here is a brief synopsis.

November Project started at a bar in Boston, MA over a few beers like many amazing things do. Two Vikings friends, Brogan Graham and Bojan Mandaric made a pact back in November 2011 to workout every morning for the next month and track their progress. The workouts varied but the core of the workouts was running the bleachers at the historic Harvard Stadium. The two continued working out and tracking their progress through the winter of 2011 and eventually began inviting friends to #justshowup. At that point, a movement was born. Fast forward six years and November Project is a free fitness community in 44 cities ACROSS THE GLOBE. I had the chance to see these two in action this past June at the annual NP Summit. I can’t even articulate what I saw, you just have to see it for yourself. Aside from the fact these two are 6’4 each, all muscle and incredibly fast, they just need the horned helmet and they’re ready for battle.

That is a very short synopsis of what NP is and how it came about. What I would recommend is picking up the book and checking out the website (november-project.com).

Now how I came to NP is a different story. I joined the Worcester, MA tribe (NP_WooYEAH!) in July of 2016. A friend at the time had been going for a while and after completing a Tough Mudder I figured I should check it out. I am not a natural runner, sure I played sports growing up but I'm used to running and then throwing myself over a wall or diving through the mud. I can easily raise the herc hoist, carry sandbags all day long and show that Yokohama tire who’s boss. Running on the other hand…well that was my weakness. My hope was to become better conditioned for my races in terms of running and tackling mountains. What I got was that and SO much more.

Back to my first day, it was a hot humid day in early July. Coincidentally it was also NP Yearbook day. I showed up at the stadium that morning, not knowing anyone and was surrounded by people in costumes. I’m talking pink power ranger costumes, feather boas, a gorilla costume …the list went on and on. Some tall dude dressed like a cross between a Newsie and a nerd comes walking up to me and goes “Hi I’m Sam” and give me a huge hug and sprinted off. I legit stood there and thought…what the heck just happened?! Turns out it was Sam Kenary, one of the NP Woo’s co-leader. Oh yeah NP does hugs…we don’t shake hands. We look you in the eye and hug you. It’s awkward…..just deal with it. You don’t hug? That’s okay we will fist bump or high five you while still awkwardly looking deep into your soul…. 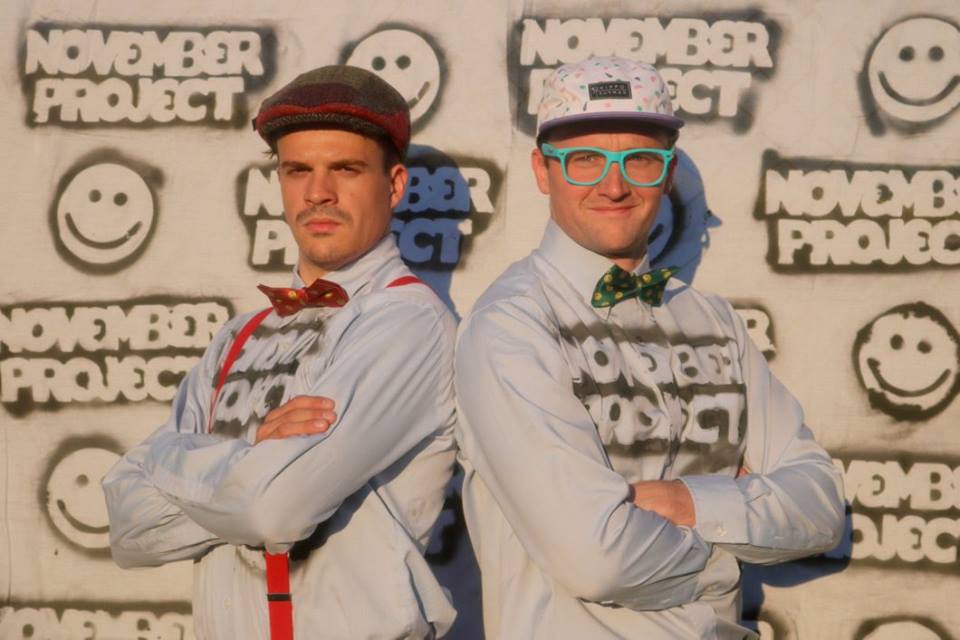 Next came the bounce, where this other crazy, a very loud guy dressed as a cross between a Newsie and a nerd gathered everyone into a very tight, close circle. Turns out it was the other co-leader Ivan Zvonar. We start every workout with a bounce usually with a call and response chant ending the chant asking ”you good?” where the tribe responded, “Woo Yeah” (to clarify other tribes yell eff yeah – but the real swear word, trying to keep it family friendly here people). Then after a quick newbie meeting, it was off to climb the bleachers and at some point, they asked you to run by the photo booth for a quick yearbook photo. 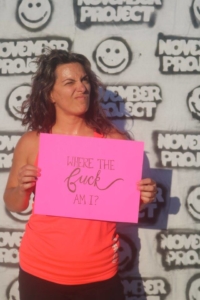 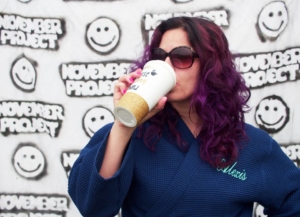 Needless to say after that first day  I continued to show up. It paid off, six weeks after joining NP I dominated a Spartan Super crushing the hills on the course. Even my teammates were in awe. Fast forward to the Fenway Park Spartan Sprint held in November of that same year. I took 30 minutes…yes 3-0 minutes off my original time in 2014.  Fenway 2014 was my very first Spartan race where I fell in love with OCR. In 2015 I was a bridesmaid in my best friends wedding and was unable to race. Although the thought did cross my mind to race and rush to the venue to get ready. In the end, I valued my friendship over the race and decided against it.

As I continued to show up I slowly started meeting people. This one girl kept running up and down the stairs, slamming her hand on the bottom wall and yelling “Woo yeah”. Aside from thinking she could haul ass I also thought…maybe the shouting and hand slamming was a bit excessive.  Well, I should just stick my foot in my mouth because this girl came up and introduced herself to me “Hi I’m Regan!” she said excitedly.  I went to stick my hand out to introduce myself. Well, Regan stepped back and said: “hell no I’m here for the sweaty hugs”. Needless to say, Regan is now one of my nearest and dearest friends and I cannot picture my life without her. She is one of many stories I have of NP. My tribe, like many of the NP tribes, are like family. We laugh together, we cry together and at the end of the day we support and bring out the best in one another.

I also got to meet another individual who goes by the name Peanut. I felt an instant camaraderie with her as she is a fellow OCR racer and one hell of a badass. When I signed up for my first trifecta I text peanut right away, when I was packing for the beast in Killington, VT it was Peanut I ran my pack list by. Basically anything related to OCR I have her on speed dial. Which brings me to my next point…. 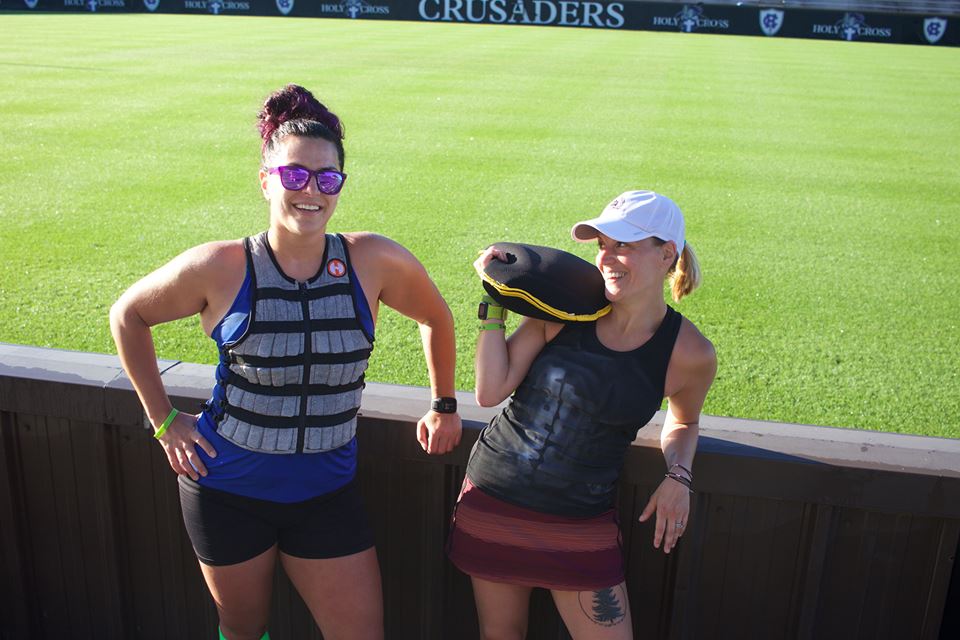 The more I got to know people in NP the more I realized it wasn’t just runners, there are many many OCR athletes hidden within the tribes. Aside from the conditioning/training aspect that attracts OCR athletes, the NP community is also similar to the OCR community. There is the comradery, the desire to do your best day in and day out, race everything and be weatherproof. Like many OCR races, NP never cancels regardless of if it’s -32 degrees in Canada with eight feet of snow or 110 degrees in Arizona with 100% humidity. You may even show up one morning and see Austin Azar running hills with NP_YEG (Edmonton),  Grady Jackson eating stairs for breakfast at the mothership (Harvard stadium) or Marc Montano in the middle of a bounce an NP_SD. Point is whether you’re an elite or not there are tons of us out there within the tribes.

NP to me is a lot of things these days. They are my backbone, they are my friends and they are my family. NP is where I can be myself and not have a care in the world. It’s where I can laugh, I can cry, I can come crash a workout or I can just show up and soak up the energy.  When I throw on a weighted vest and run the stadium I don’t get criticised for it. Instead, I get high fives and “hell yeah”. Usually, I’m chasing Peanut as she zips up and down with her own sandbag at that point.  It’s because of NP I decide to push myself outside of my comfort zone. I ran my first 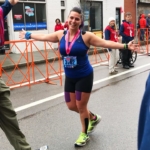 half marathon this November and haven’t ruled out longer trail races (because it’s all training for OCR right?). As I told Peanut and Regan on a group chat when discussing the upcoming half marathon. “Nah I’ll cheer station for the half it's too many miles”, they both responded, “says the girl who will be coming off of a 15 mile Spartan Beast at Killington”….they had a point. The people are genuine, they root for you, they actually give a damn about you and want to see you succeed. I can go on and on and on ….and on and on and on about how amazing this movement is but I’ll just end it right here with this. Why don’t you #justshowup? 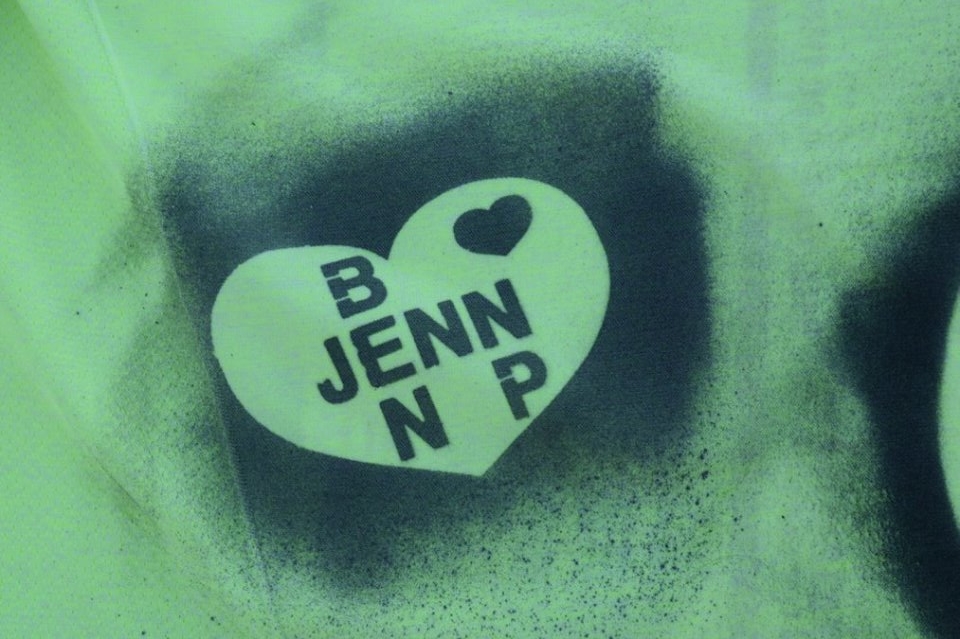 A big part of NP is the grassroots gear, it's flat black spray paint with November Project and your tribes signature tag. Worcesters is the smiley face as it was originated here. This tag is to honor an incredible human being Ben O'Meara who was taken from us too soon this past spring. Ben was and will always be an integral part of NP. He and his wife Jen embody what NP stands for and always be with us. As she eloquently put it, “time with Ben was about quality not about quantity”