Remember this announcement a couple months ago? 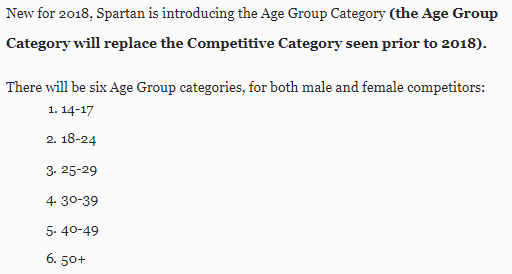 It seemed like everyone in the OCR community made a big deal about Spartan Race getting rid of the Competitive category and switching it with Age Groups. Most of the complaints came from those in the 45+ portion of the 40-49 age group, as they argued even just a 5-year age difference makes a huge difference for Master’s athletes. This topic blew up on social media, with most of the arguments favoring the older racers. Many said that Spartan should combine 18-24 with 25-29 and create a single 18-29 age group. Instead of one 40-49 age group, many wanted to separate 40-44 from 45-49, too. Despite lots of negative feedback, Spartan decided to stick with their initial 6 age groups.

Let's fast forward to this past weekend when Spartan Race hosted its first US race of 2018 in SoCal. Would participation numbers for Master's athletes be higher than those in their early 20s? Short answer: yes. Does it even make business sense for Spartan to have separate 40-44 vs. 45-49 age groups, though? After all, Spartan would lose money if they don’t have enough participation in these age groups. One race from this past weekend is too small a sample size to make any conclusions, so I looked at overall participation numbers over the past three years from a few races. Each race was from a different area of the country and for each distance type in order to get some variety in my sample. As you can see, there were typically nearly twice as many 40-49 racers as there were 18-24 racers (which gets its own age group category). 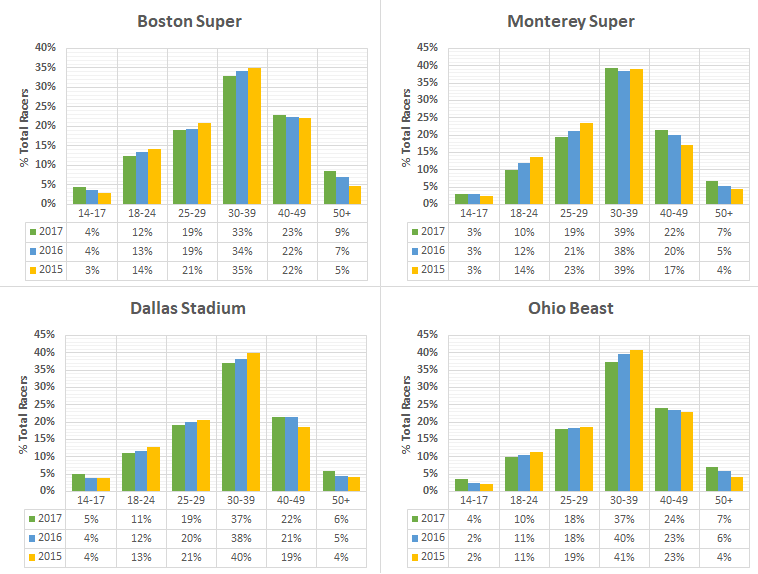 I took it one step further and broke down the 40-49 age group into the two desired age groups: 40-44 and 45-49. Those charts sure look pretty identical for each venue, don’t they?

The 40-44 age group almost always had a higher number of racers than the 18-24 age group. Similarly, participation numbers for the 45-49 age group were within 1-2% of those from the 18-24 age group. This suggests that there will be sufficient participation from the 45-49 age group to warrant their own division. Despite what the data shows, let’s say Spartan Race decided that they won’t create a 7th age group to separate 40-44 and 45-49. If Spartan is determined to have exactly 6 total age groups, are they choosing the right ones?

There’s a reason high school sports have the freshman, JV, and varsity teams. Most human bodies undergo major transformations during your high school years, which is why so few high school-aged athletes can make a major impact on a college team. Most high school-aged racers would fall into Spartan’s 14-17 age group, which I agree is a fair age group range. Athletes tend to get stronger and faster as their bodies rapidly grow during puberty. You continue to develop physically for a few years before reaching your “physical peak” sometime in your 20s. Even the most well-trained athletes can only stay within their true physical peak for about a decade before their performances inevitably drop.

Despite having more experience and awareness, older players are constantly replaced by unproven younger players. Why do you think so many people make a big deal about Tom Brady playing at such an elite level despite being 40 years old? Because it’s so rare! In fact, there have only been 60 players in the entire history of the NFL who played during their age-40 season, and nearly half of those have been kickers. In the 100-year history of the NHL, there have only been 85 players to play into their 40s, and that number shrinks to 27 if you look at the NBA.

Carry this over to OCR and you’ll notice a similar trend. Yes, there are outliers like Hobie Call and Cody Moat who continue to dominate opponents 10+ years younger than them, but in general, athletic performance declines noticeably once you reach your late 30s. Very few Master’s athletes remain competitive with the best-of-the-best racers, and those who do are in their early 40s, not their late 40s.

Most people think of obstacle course races as jumping over walls, weighted carries, doing monkey bars, etc. In reality, completing all of these obstacles combined will take up less than 20% of your total race time. At least 80% of your time on the course will be spent running, so it’s worthwhile to compare OCR performance to running performance at various ages.

Older runners can actually remain competitive with the top elite runners late into their 30s in longer distance events since it takes over a decade to maximize your aerobic capacity. The opposite is true for shorter events, though, so if you want to set a PR in the 100m, you probably want to do it before you’re 33.

Age grading is used by track and field to take into account the natural decrease in athletic ability as we age. Everything is on a “0-1” scale, where “1” means you’re in your physical prime (typically in your 20s for both genders) and anything lower means your age suggests that you are no longer in your physical prime for that distance. Here’s a great explanation on age grading, along with a calculator (at the bottom), so you can plug in some numbers and see how some of your recent running times rank.

For those of you who are data nerds (like me), there's a link to an Excel file on this page with every single age grade factor for dozens of running distances.  Rather than forcing you to scroll through thousands of lines of Excel data (exciting, I know), I made this chart to show how age grades change over time, specifically from ages 18-49 since those are the age groups that most are complaining about: 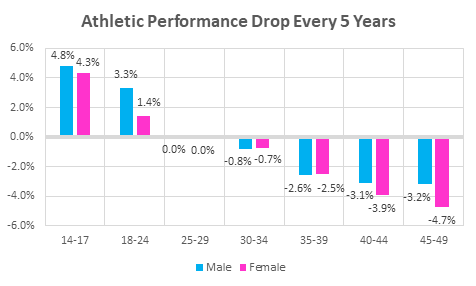 Athletic performance levels stay very consistent throughout your 20s. In fact, there is very little difference in athletic ability from ages 18-34. Once you reach your mid-30s, however, athletic performance slowly drops until major decreases begin your 40s. Ask anyone in their 40s and they’ll tell you that they just don’t recover like they used to even a few years ago.

Unfortunately for the 50+ racers, participation numbers don’t appear to be high enough to justify smaller 50+ divisions, such as 50-59, 60-69, etc. Peak athleticism decreases even more sharply into your 50s and 60s, making it even more difficult for racers approaching retirement to end up on the new 50+ Age Group podium. Unless a massive wave of passionate 60+ racers starts participating in OCR events, it doesn’t make financial sense for Spartan to make changes to their 50+ category.

Keep in mind that everyone gets one year older each year, and many of the current 40-44 racers will soon fall into that 45-49 category. Finding new customers is one of the hardest things to do in business, so it would be a poor move for Spartan to anger many of its existing customer bases. Several financial studies have shown that your peak earning years occur in your late 40s, which suggests this is when your disposable income would be highest. In other words, you’re probably more likely to spend extra money at the event (which makes race companies happy).

0shares
Disclaimer: The viewpoints expressed by the authors do not necessarily reflect the opinions, viewpoints and official policies of Mud Run Guide LLC, or their staff. The comments posted on this Website are solely the opinions of the posters.
By Jack Bauer|2018-01-30T11:59:58-05:00January 31st, 2018|Op-Ed|16 Comments