Michelle Ford is a true inspiration to us all. I watched in November as she came in third place at World's Toughest Mudder. The entire time that I saw her on the live footage she was smiling, happy and looked like she was having a great time. It was her positive and genuine spirit that made me want to feature her in this article series – not to mention the fact that she is a genuine badass. She is an athlete and a member of the Vancity OCR Wolfpack. I hope you enjoy getting to know her better.

My name is Michelle Ford. My husband and I recently moved to Squamish, British Columbia. If you aren’t familiar with Squamish it’s a small(ish) mountain town right in the middle of Vancouver and Whistler. It’s also ‘Canada’s Adventure Capital’ – aka the ‘do-everything-town’ and/or the town where every other human is a world-class athlete. So when I’m not busy working as trainer/coach, or training for upcoming races, I’m trying to keep up with the Squamish life and learning all the things like climbing, skiing and biking and what not.

I was raised by a family of athletes. My pops was a big-time football player, my aunt was one of the first Canadian women’s hockey teams and my mom played every sport she could. So it was inevitable I was going to play sports. When I was 6 my parents put me in gymnastics because I kept jumping off the furniture. I spent the next 10 years training 20hrs a week as gymnast which pretty much set me up for any other sport thrown my way.

Once a jock, always a jock. Despite taking a 6-year hiatus from sports to finish a BFA in photography and dabble in life as an artist, I needed to go back to my competitive fitness routes and signed up for a Spartan race with a fitness group I was training with at the time.

2012 Vancouver Spartan. had just started working out again and could barely run a 5k so it was incredibly painful but I had the best time and was hooked.

I’ve done a little bit of everything. Sprints, Supers, 100 milers, 50k, marathons and just about everything in between. While I appreciate the short stuff after the fact, I'm convinced that, mentally, a little part of me dies with every sprint or super I finish, whereas when I'm out there, alone, 5hrs into a 10hr race, I am in my happy place. The final few hours of those long days, and even longer heavy carries, when the burpee count is getting into the 200s… I live for that. I carry that feeling with me in every workout, race, run. I have some unfinished business out there and I cannot wait to get back out there and chase down the sun and everyone in front of me.

I like challenging the strong, whether it’s the inside or on the outside. OCR does exactly that.

Honestly, it’s the women (and men) who are in the open heats, that are out there on course for 3 sometimes 4x longer than me that make me push myself. Those folks who are out there, doing something completely out of their comfort zone, huffing up those steep hills, racing themselves to finish something they’ve never done before. I hope people realize how inspiring that is, and how much harder it is for those racers to finish the race than it is for me to finish top 10.

On the course what has been your favorite obstacle and why?

Any heavy carry. Lets me get a little ground on all those ladies who kick my butt in the running department.

On the course what has been your least favorite obstacle and why?

Barbed wire. Oooooooo I hate it! The feeling of all those sharp rocks on your skin is like nails on a chalkboard. Once, while racing in Texas, I not only rolled over several cactuses, but I rolled my face perfectly onto a large piece of hay so that the stick went straight up my nose and caused my nose to bleed for the rest of the race. Just the worst!

Are you someone that plans your race schedule in advance (to take advantage of things such as early bird pricing) or do you sign up for things on the fly?

I like to plan my races in advance, however, I always register super last minute. I’m a bit superstitious and worry if I commit financially to far in advance that I might get hurt or some other catastrophe will happen that will not allow me to race and I’ll lose my $$$.

It’s incredibly inspiring and humbling. I think if you allow yourself to become overly competitive and not embrace the talents of all the athletes around you, you are setting yourself up for disappointment, and burn out. Whereas when you encourage your fellow competitors and your friends and those racing around you that you may not even know it takes a load off your shoulders and can really get you excited about what limits you can reach and not put the pressure of what everyone else is trying to reach.

I’ve been competing in OCR since pretty close to the beginning of its time. I’ve seen the evolution of how athletes train for the sport go from a very CrossFit specific style of training to OCR specific (heavy carries, burpee, and pull-ups) to running specific and rock climbing. My biggest weakness is running and grip. So I spend most of my time working on speed and in the climbing gym. There seems to be a trend where athletes feel they need to train 100% all out 100% of the time while simultaneously racing back to back races in back to back weekend; this is a recipe for a plateau, injury, and burn out. I strongly believe in trying to get the most out of my training for the least amount of work. For most people races aren’t longer than 60-120 mins. I see no reason to be doing workouts that take upwards to 120+mins to complete when you can create powerful, purposeful workouts in 20-30 mins. I could ramble on for days about adrenaline usage `during training vs racing but I won’t bore you sciency stuff. 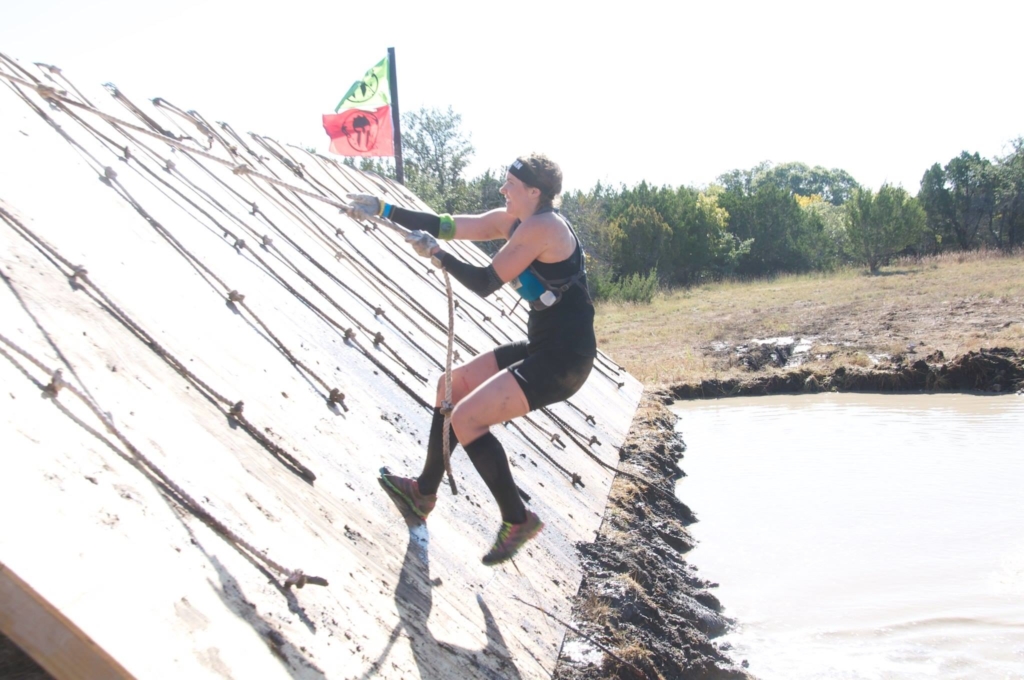 Don’t be scared! These races are so fun and anyone (I mean anyone is capable of doing them) I also suggest you become comfortable with running/hiking and spending some time working on grip strength… oh! and I really think there is a big benefit for doing long and slow heavy carries to build stamina and endurance for all those carries.

The likes Serena William winning the Australian Open while being in her first trimester. Danica Patrick for standing out in an all-male industry. Joe Rogan for being a funny meat head yet a huge supporter of women’s rights and my husband who has to be one of the most disciplined athletes I know.

What is one your one A race/bucket list race you want to do?

TMX in March. Pretty excited to go from a 24hrs race to a 1mile race. Also WTM in Atlanta. And maybe one-day race Western States 100m.

Best training tip for an endurance event such as World's Toughest Mudder or a 50km ultra.

Whats the best way to reach you on social media if someone wants to reach out?

I’m not that best at social media but pretty active on instagram: @peak_power