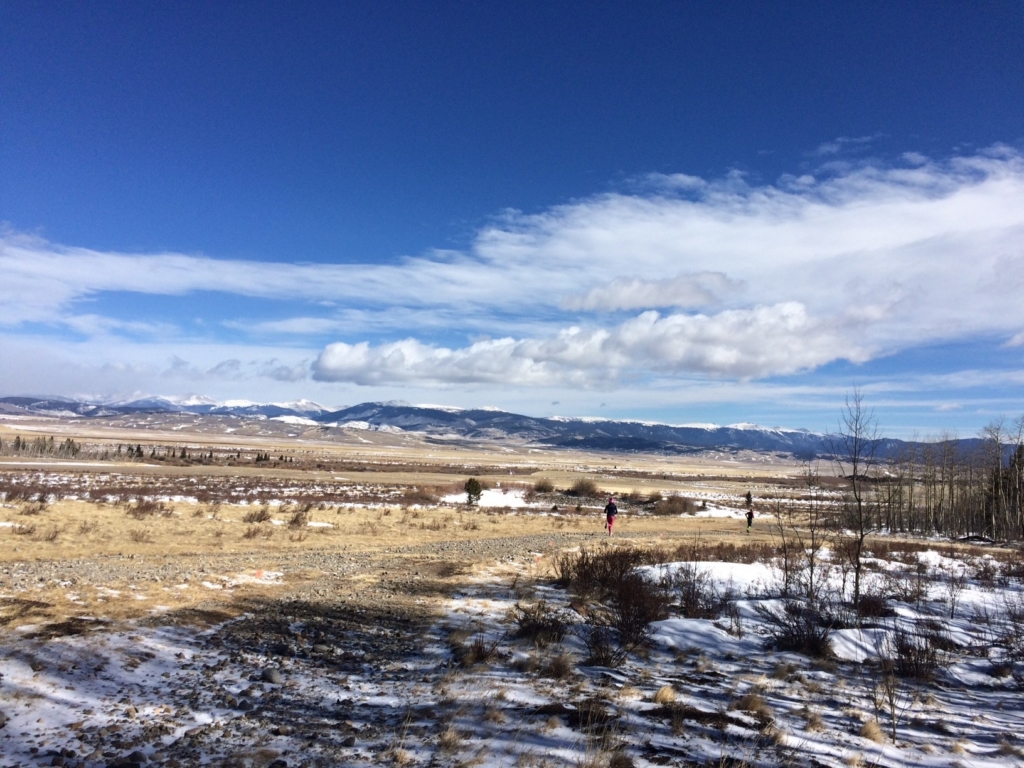 Nestled away in the small mountain town of Como Colorado is an Abominable Adventure Snow Run that is put together on the grounds of a kid’s adventure camp. The race boasts 4 snowy miles at 10,200 ft of elevation and 20+ obstacles for you to crawl, climb, run, sled, and trudge through. Course Director Scott Jones was tasked with putting together the best possible course he could working with the weather conditions of this season. In the 4th running of the event, the adventure run had to deal with the constant melting and freezing of snow as well as a fresh set of powder the morning of the race. With the constantly changing conditions and high winds, there was no way to know what kind, of course, would be ready for runners on race day. The event started with a sprint across an open field to capture a flag in an Aspen Grove. The flag we traded for a heavy brick and carried up a steep hill. At the top, we were marked for completion and then brought it back to its original spot.

Most people would be content climbing this hill once, but the Abominable Run had us do it three times. Once with a heavy brick and then two more times with sleds in tow to slide back down the course. Runners were instructed to bring their own sleds. This created an array of sleds on the hill from Marvel themed to thick trash bag DIY sleds created an unusual scene. Definitely not your kid's sledding adventure. In between slides we completed 25 burpees and run another loop around the camp before returning to slide down the second time. The burpee zone was overseen by two young kids who would yell random numbers in an effort to get you to do more burpees. The back half of the course had your traditional obstacles, but with knee to waist deep snow really pushed it over the top. This part of the course had the most running and featured multiple walls to jump over, several wire nets to crawl under in the snow, a set of balance beams with burpee penalties for falling, and another brick carry up and down a hill for good measure.

The Abominable Adventure Run did a great job utilizing the space and resources it had to provide a wonderful experience for racers of all abilities. The lack of volunteers could be felt as each obstacle did not have someone to monitor, but racers aided each other at every station and a course briefing was given before the race. Hopefully, the race in the future will have more volunteers at each obstacle. After Race Base Camp

Base camp was held at the camp’s cafeteria and provided hot chocolate and coffee for all runners as well as a warm area to change and use the bathroom. Lauren Jones was in charge of setting up registration and keeping things running on this side of the race.

There were only two sponsors announced before the race started and the lack of big corporate sponsors gave this race a small town feel that you do not get with some of the bigger races. With 150 racers registered there was a much more intimate feel and you were more connected with the event organizers than somewhere else.

Runners were not timed, and everyone was encouraged to have fun, but if you managed to finish the grueling course you were awarded with an Abominable fleece beanie and a finisher dog tag for your collection. The party continued well after the race with several prizes and awards, and people were encouraged to head over to South Park brewing in nearby Fairplay Colorado to enjoy a craft beer.

The event organizer told me this was going to be a small race and not to expect anything close to Spartan Race or something similar. However, what they did manage to accomplish was bringing together a community around obstacle course racing and they made every runner feel like more than just a bib number. If you are looking for a competitive heat with timed laps and a big race atmosphere, then the Abominable Race is not for you. If you want to feel a part of a community and come out and enjoy the OCR sport we all love then you found the right race. Overall race rating: 4 out of 5

Have you done an Abominable Winter Obstacle Adventure?

Leave your own Abominable Winter Obstacle Adventure review and feedback...