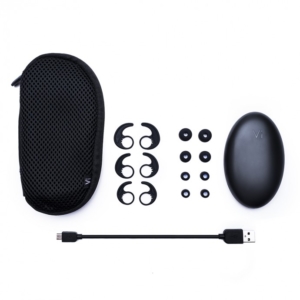 GPS and heart rate tracking technology has been dropping in price (and size) every year.  The Vi fitness tracker headphones aim to take this fitness tracking technology seen in many popular watches from companies like Garmin and Suunto, shrink it into a pair of headphones, and add some artificial intelligence to go along with it for good measure. LifeBEAM, the company behind the Vi headphones, provided us with a set of headphones for review. LifeBEAM got its start developing a helmet that tracked the blood flow and heart rate of pilots and astronauts.  After licensing this technology to other companies who have been building their own headphones, they have now put out their own brand of headphones – The Vi. Their “aerospace grade biosensors” will track your heart rate, elevation, cadence, speed, time, and location (while paired with a smartphone).

Inside the box, there are several different sized earbuds for you to get a fit specific to your ear. Given that the device is tracking your heart rate through this fit, it is important to make sure to use the right size earbuds.  A companion app is available for both Android and iPhone (this review utilized the Android version of the app).   After doing the initial pairing, there will likely be a firmware update for the headphones available.   Several firmware updates became available over the time we had the headphones.  These could take as long as an hour to fully load on the headphones, so plan accordingly before trying to use them for your first run.

For your first few runs, the Vi will be in a calibration mode as it learns your running style and tracks your vital signs.  When you first start, you are asked whether you are running to get faster, go further, or lose weight. The company states that it takes approximately 2 hours of running with the device for it to be fully calibrated and unlock the full set of features. Until that point, the heart rate monitor, cadence training, and other features still work – it's just the AI coaching piece that is not fully enabled. In my case, after more than 4 hours of running with the Vi it was still stuck in calibration mode with around 60% completion. Their support team was initially unable to resolve this issue, but after a few weeks they were able to push an update to my device to force calibrate it, after which I did have access to the AI coaching features. 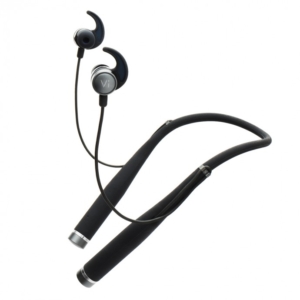 Once you've run with the device a few times, you'll have a good grasp of what the device can and can not do – and it's not always intuitive.  The basic interaction is that you touch the right ear bud once, which puts it into listening mode, and then speak a command.   You learn early on that you can use the phrase “What is my heart rate”, to find out your heart rate. This works (most of the time). After learning about this command, the voice assistant states she'll tell you other commands later. One might think you can then say “What is my cadence”, “What is my speed”, or “What is my pace”, or “How far have I gone”. None of these commands actually work. The only other 2 commands you are able to say is “Step to the Beat” (which enters into a metro-dome mode to help you get a certain cadence), and “How Am I doing”. This “How Am I Doing” command will tell you your average speed, distance, and a few other stats, but there is no way to get those individual stats without having to listen to all the others. Since the initial review, Vi has released a new firmware expanding the list of voice commands available. You may now speak commands like “Pace”, “Speed”, “Distance” and more to get instant feedback on those stats. A full list of voice commands available can be seen here

The headphones do have physical buttons, which can be used to control the music (skip songs), adjust volume, as well as confirm a yes/no command if necessary.  Most of the control and interactions come in the form of voice commands like those above. If you are on a busy path, and need to check your heart rate, this means you need to ask everyone around you “What is my heart rate”, in order to get your Vi to tell you your stats.  You might be in for some funny looks, or just a conversation starter, depending on where you decide you need to get some feedback from the Vi!

The device has 3 run modes you can choose from – Free Run, Run For Time, or Run For Distance.  If you are using Free Run mode, after every mile the assistant will give you the distance you've run so far, your average heart rate thus far, and average speed. However, the data given is your average for the entire run. There seems to be no way to get the data for the mile last completed. During my testing, the first few runs the voice recognition seemed spotty at best recognizing my requests to the voice prompts (once I figured out the limited subset of commands), leading me to hear the phrase “I'm Sorry, I couldn't quite understand that” many times. However, firmware updates that were pushed out during my time testing did improve the accuracy of hearing what I was saying.   Several other runs the device would seemingly lock up, and not accept any voice commands.  A few other times the Vi would accept voice commands, but lose the ability to control the music playback.  There appeared to be no rhyme or reason to it.  These became less and less frequent with subsequent firmware updates, but during my last test run before publishing this, the device locked up and wouldn't respond to voice commands for 15 minutes out of the run (although it still played music in the background and chimed in at a mile interval).

Once my Vi was calibrated, the only real change I noticed was that the headphones would then be able to give me audio feedback on my pace. It uses use zones called “Beast mode”, “Cruising speed”, and “Picking it up a little bit”. Unfortunately, there is no way to tell exactly what heart rate or pace ranges this corresponds to.    Beyond having Vi automatically chime in with where my pace was as I sped up or slow down, during my tests I noticed no other “intelligent” coaching that occurred.   According to a support document, the training on the device is currently Version 1, and they plan for an upcoming Version 2 release to have planned training, where Vi will guide you on what to do day-by-day to reach your goals.  Before and after runs, Vi would give would also give generic fitness tips, and advice to cool down, but unless you are a completely novice runner, these will not be of much use to you.

Heart rate accuracy was one area the device seems to have spot on. We compared the accuracy against a Garmin heart rate chest strap and a Mio Alpha wrist monitor, and it tracked very well against both of those. In addition, nearly every time we checked our spot heart rates during runs against the data shown on the Garmin it was within 2 bpm of what was shown on the Garmin.  Above is a graph showing cadence across 3 different devices (a Stryd footpod, Garmin footpod, and the Vi), and below is a graph comparing the heart rate between the 3 previously mentioned monitors.   You can view more comparisons and zoom in or out using this link. You may notice that around the 3:30 mark is a straight line – this is one of the times the Vi randomly stopped tracking for a short period of time.  Again, these became less and less frequent as firmware updates came out, but did still happen. 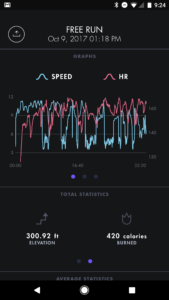 The Vi app on your phone provides basic data on your run, but you shouldn't expect to do any in-depth analysis with it. Instead, they provide the ability to export your runs via a TCX file, as well as the ability to auto-upload your run to Strava.     While the app is functional, there are certainly some quirks to it.   For example, while you can stream a playlist from Spotify, you are unable to load and play your own playlists you have on the device even though the UI suggests you can do so.  You can work around this by starting your playlist through Google Music before starting your run.    The sound quality of music playback subjectively felt pretty good, as the Vi utilizes technology from harman/kardon for playback.  Since the Vi headphones don't have a GPS chip in them, you must run with your phone with the Vi app open to track your distance.  If you don't currently run with your phone, it's something for you to consider when looking at these.

The company recently released a beta mode for both treadmill and cycling. In using the treadmill mode, the Vi app itself has no concept of your distance as you are running. Given you are running on a treadmill, it assumes you can read the display on the treadmill itself. Once you finish, you simply enter in the distance run (that again, you read from your treadmill), and it gets saved like a normal run on the Vi. You then can see the usual graphs of heart rate, cadence, and more. In my tests in the treadmill mode, the device accurately tracked my stats – at 10 minute intervals, it told me my average heart rate, and in viewing data on the app afterwards, the full breadth of stats was available. However, like several of my other runs on the road, while the activity was going on it never once was able to accept or respond to voice commands, so I was unable to get a readout of any stats except at those pre-defined 10 minute intervals. A treadmill can be a nosier environment, however, I would have thought it would have been able to understand at least a few commands while using the treadmill. This again, is something that could be patched via firmware updates to the Vi in future updates.

Overall, the Vi headphones seem like they have a lot of future potential, and some brand new runners might like it. As someone who has a bit of running history, and also already has a Garmin watch, it wasn't the best fit for me personally. I don't enjoy running with my phone, and the AI coaching is too basic. The main issue for me though was there were way too many instances of the device not responding to voice feedback, or losing control of the music playback for me to put my trust in it at this point. With future firmware and software updates, this device certainly has potential, and several of the issues above could definitely be fixed with those updates.

If you are interested in getting some Vi headphones for yourself, you can do so here, and for a limited timed get an additional 20% off and free shipping with the code: FREESHIPPING20