For three hours they waited.  Patiently.  On the Boardwalk.  The sun shone brightly and clear.  The blue water beckoned.  The umbrellas, towels, and toys remained in the parking lots while hundreds of men, women, and children stormed the beach of Ocean City, New Jersey for the annual Memorial Beach Challenge.  I finally ran the race this year and can confirm that by far the hardest obstacle was the sand.  Soft, deep, sand.  Not just flat beaches of sand.  But also man-made, 20-foot high mountains of sand.  Six or seven of them if I recall. 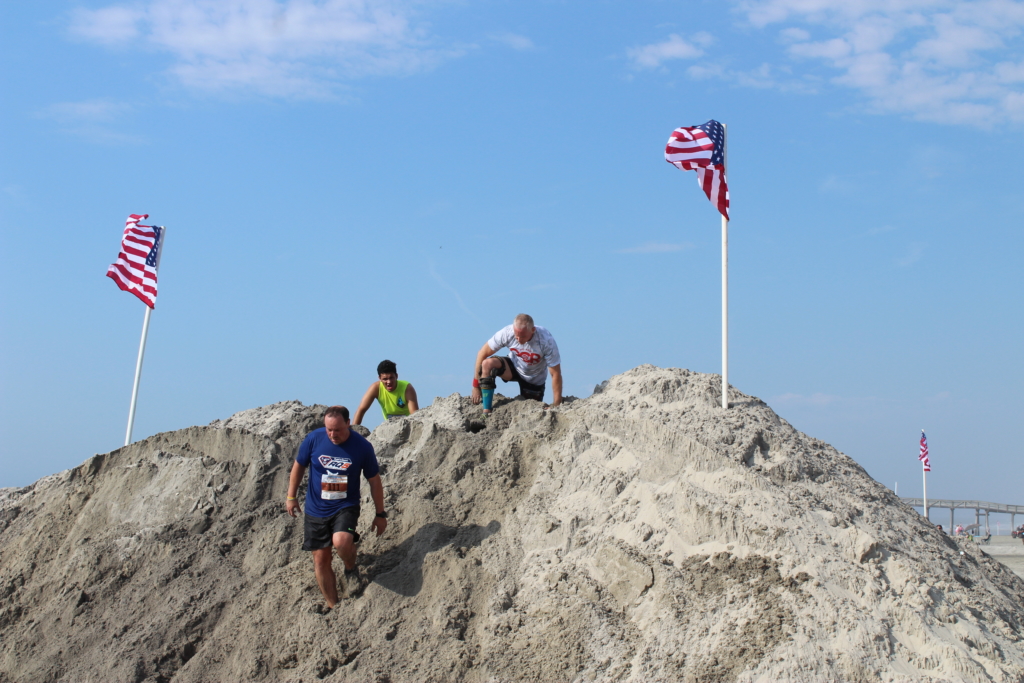 Seven loose sand hills like this will challenge your quads 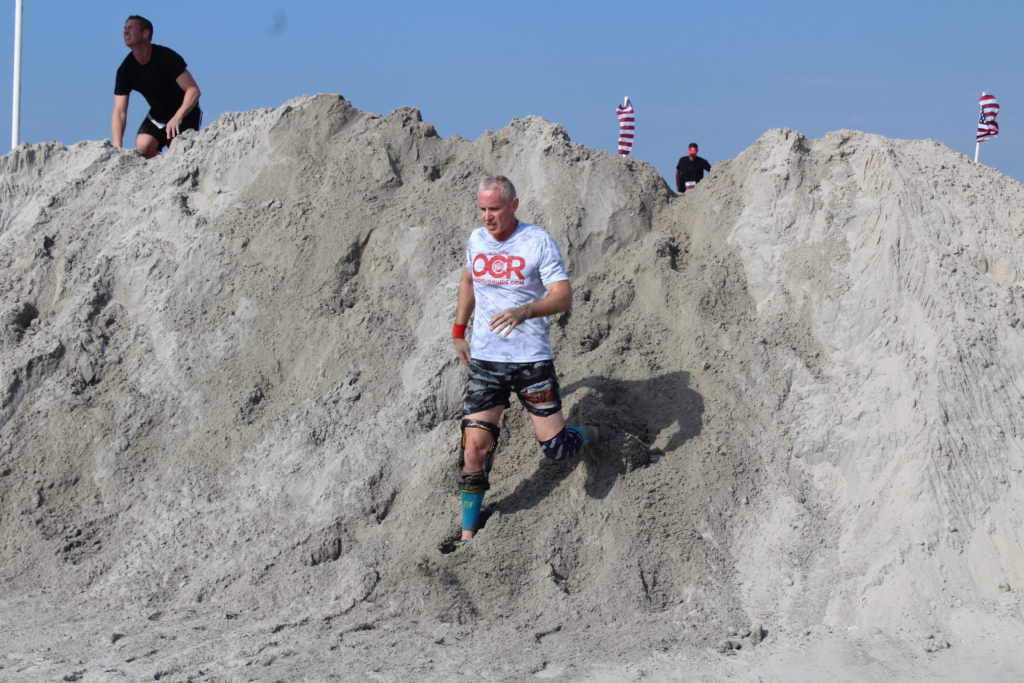 Coming down one of the seven sand hills

Once again, Race Director Mike Vaules put on a great race for every competitor.  The real message of the day, however, was for us all to remember our fallen heroes.  Today was about the thirty-one.  Gold Star father Charles Strange talked about the day his son and thirty other SEALS died when their helicopter was shot down by a Taliban RPG.  He talked about the healing, the sacrifice, and even the joy his son experienced while training for missions.  Training way harder than this two-plus mile OCR on the beach. 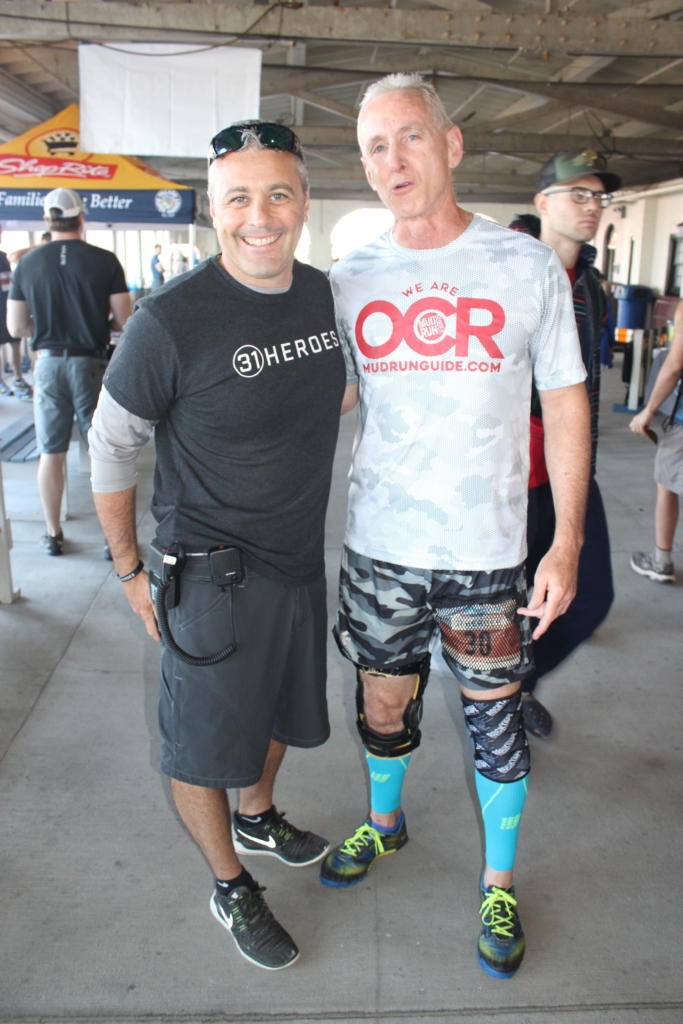 The race started and ended at the Music Pier.  We headed north towards Atlantic City, jumped a hurdle, walked a balance beam, did a short sandbag carry, did a quick grinder, then did a U-turn at 5th Street and headed south.  We crawled around the Pier, lunged toward the Boardwalk, and did another grinder hosted by Local Gym.  Then it was about a mile of just running with one set of sand hills about halfway where the local fire department soaked us real good.  At the Fishing Pier between 14th and 15th we turned north again to face a gauntlet of obstacles.  It started with another grinder.  Then a series of sand hills followed by a dash beneath a camo net and then a quick set of over-unders.  An A-frame wall and tube crawl were at the end. 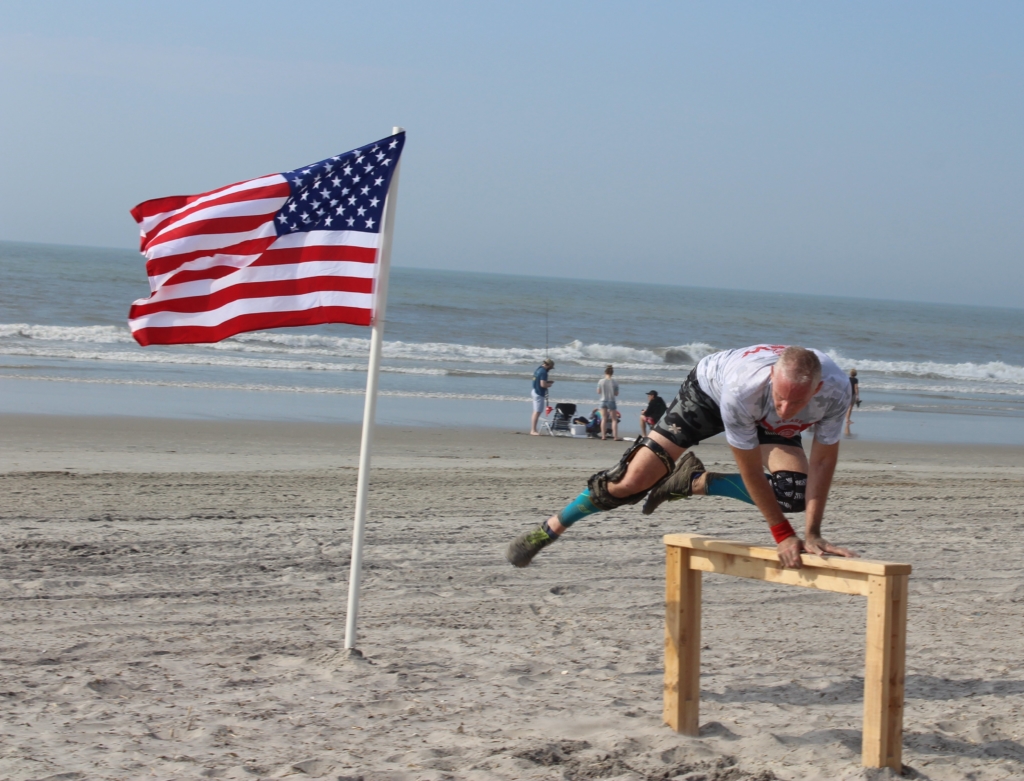 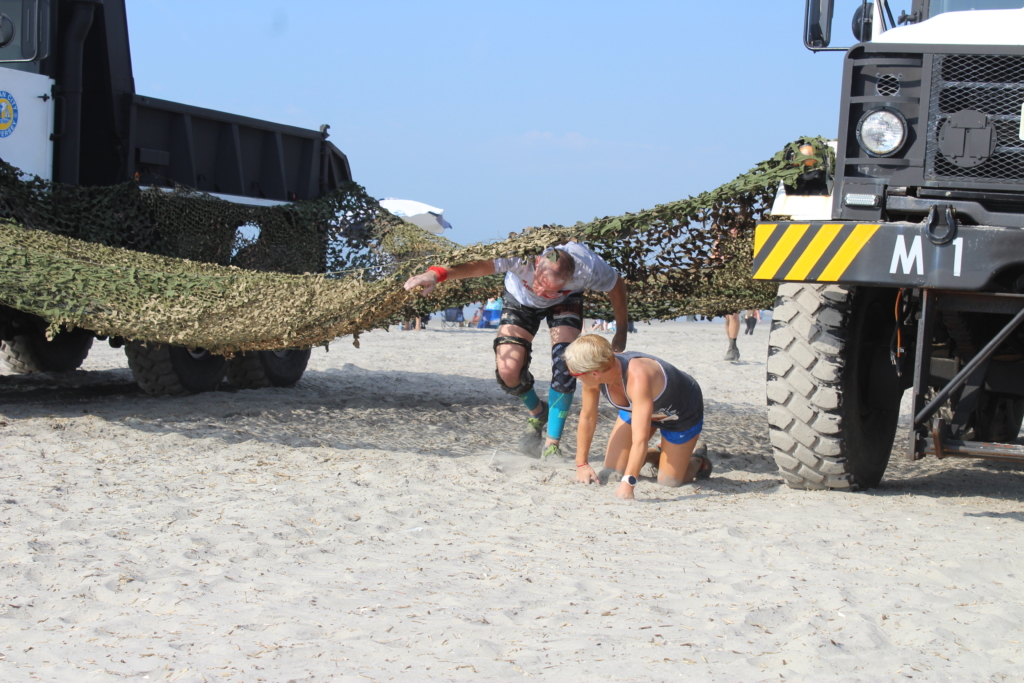 Good technique will surprise the competition! 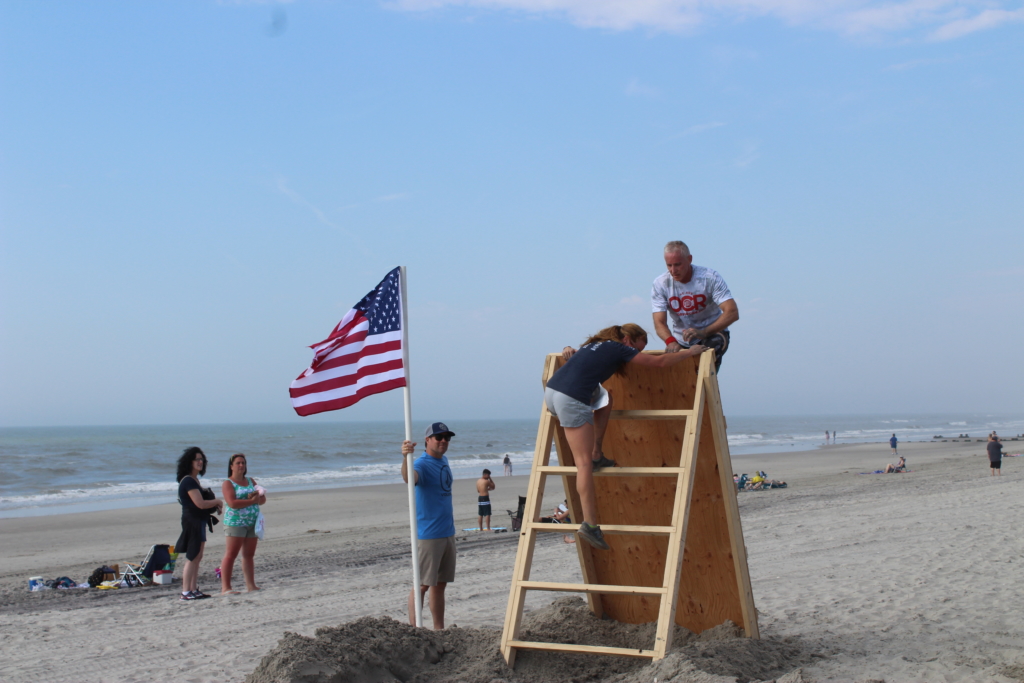 I got chicked by a co-worker! She was FAST!

Then it was the kids’ turn.  Their race was much shorter but so much fun to watch.  Mom’s and dad’s filmed every step of these little bursts of energy.  There were hundreds of them.  The event claims about double the entries from last year.  Was it worth it? 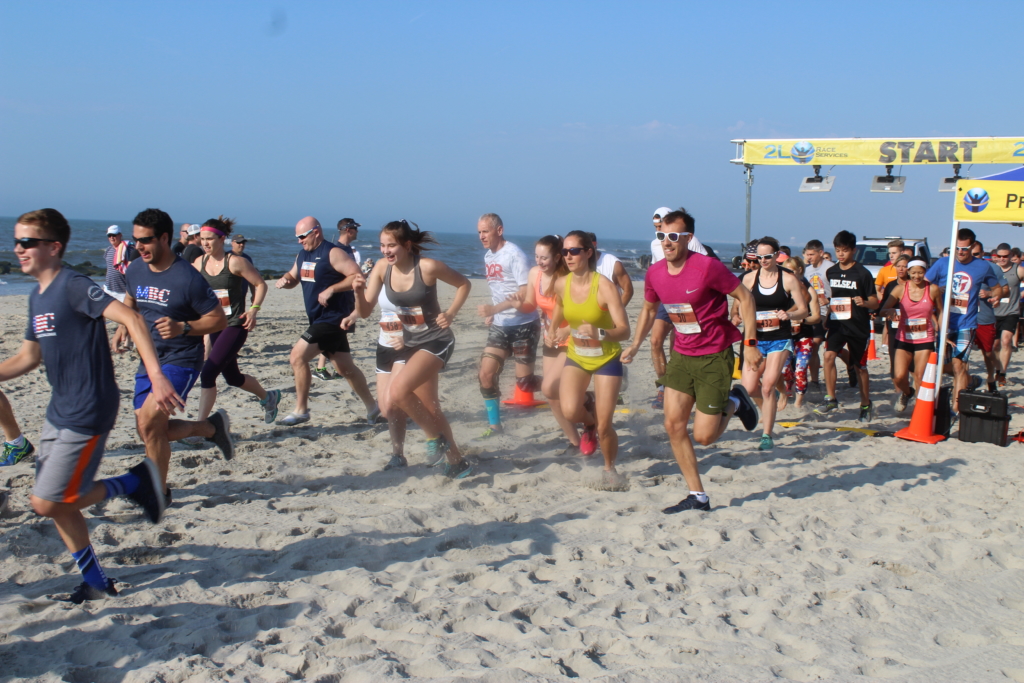 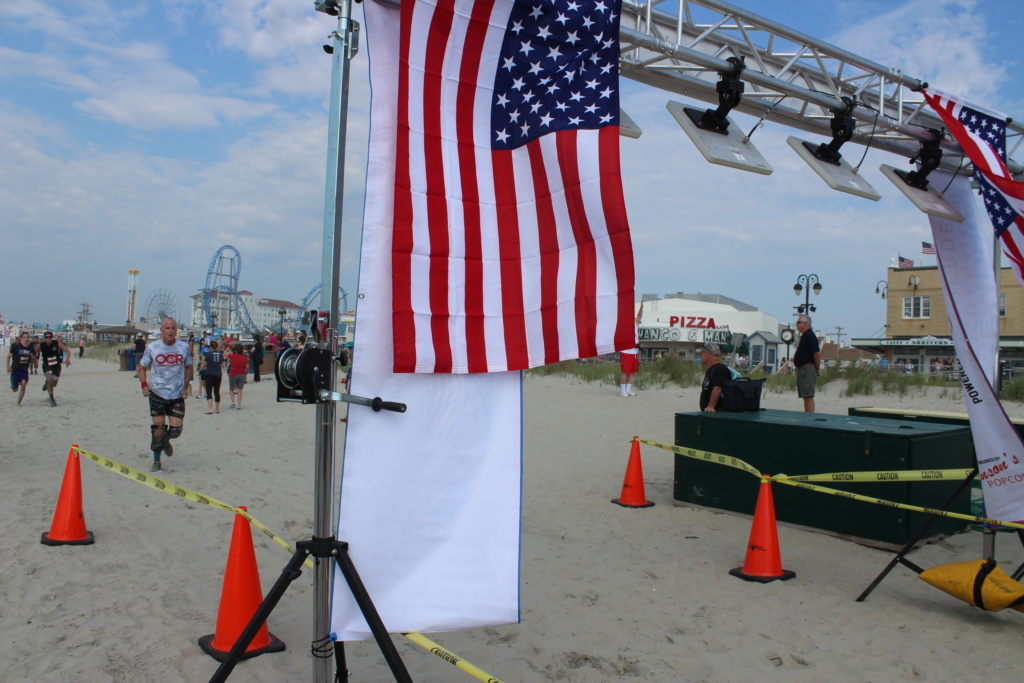 The finish line welcomed over 500 runners

From some perspectives, yes.  The race in the sand was excellent, very difficult work for any runner.  Running in sugar sand is not like running on trail sand.  This stuff is like mush.  Your feet give out with every step.  You feel it with every twist of your knees and hips.  Two miles of this is a true challenge that very few people get to train in.  The obstacles otherwise were uneventful to seasoned OCR athletes.  But they are great for beginners and children.  The other huge positive of this event is the theming around the 31 Heroes.  Net proceeds from the race went to this very worthy program. 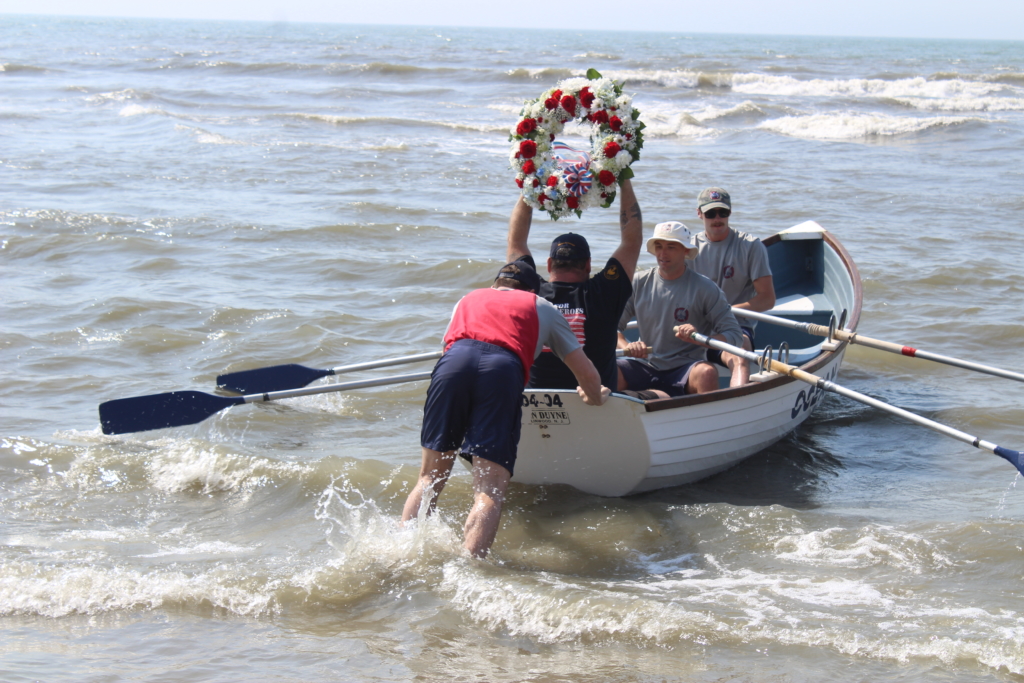 For the beginner and families, I highly recommend this event as a 5 for 5.  For all other athletes, I score it a 4 for 5 just for the running part.  For the obstacle portion, I rate it a 2 for 5 (except for those hills).  I was really looking forward to the ABF Mud Run rigs this year.  Unfortunately, they were already booked for another event.  Those rigs (Platinum) would have upped the obstacle rating considerably.  I ran the race with an old ABF friend Mike.  He and I agreed on this and also agreed that we should persuade our other ABF friend Larry Cooper to bring a Destroyer to Ocean City’s Memorial Beach Challenge next year.  That will bring the ante up for sure.

Have you done an Memorial Beach Challenge?

Leave your own Memorial Beach Challenge review and feedback...