The 2018 Virginia Spartan Super kicked off on a damp and chilly morning. Recent storms had brought in a powerful cold front and substantial rain. Many Spartans were bundled up in coats, hats an gloves leading up to the start of their waves. While it did warm up as the day progressed, daytime temperatures only hovered in the mid-50s. The overcast skies and the cool, damp air was a textbook Fall Virginia morning. The combination of weather, wide-open rolling hills, and dense forest provided the perfect setting for this 8.25 mile Spartan Super.

Infinity Downs Farm provided the venue for this race and it is well suited for the task. It’s an easy location to find, and there was plenty of signage to direct racers to the parking area. The parking area itself was plenty large enough to accommodate all of the racers but was also located close enough to the Festival area that no one would have had an excessive walk from the car to the race. The Festival Area was very large and roomy. This was nice as it gave athletes plenty of room to warm up while giving spectators plenty of space to spread out. There were a few muddy spots to watch out for, but for the most part, the Festival area was dry and grassy.

While this course was a little bit short for a Super the course had plenty to offer. The course is surprisingly flat considering it is surrounded by some modest mountains. There weren’t any overly steep inclines on the course, but that doesn’t mean there wasn’t any elevation change. Most of the elevation change took place over long, gradual descents and climbs.  In fact, there were actually very few genuinely flat portions on the course.

What the course lacked in elevation change it made up for with technical terrain. The majority of the race took place deep in the woods with only a few well-worn trails or paths. What you were faced with was almost an entire course full of rocks, roots, stumps, and holes. The trees had dumped a fresh coating of leaves all over the ground, making it that much harder to know what you were about to step on. There was also plenty of mud on the trails, but it wasn’t overwhelming. The mud was slick enough that had to watch your step but it usually wasn’t so thick that you had to worry about losing a shoe.

There were also a few small stream crossings, which both provided you the opportunity to clean your shoes and also to get muddier. Most people seemed to opt to avoid the water as much as possible though because regardless of the mud, the overnight temperatures had made any water on the course quite cold. If you started your race early and were feeling tired, be sure that the Dunk Wall woke you up! 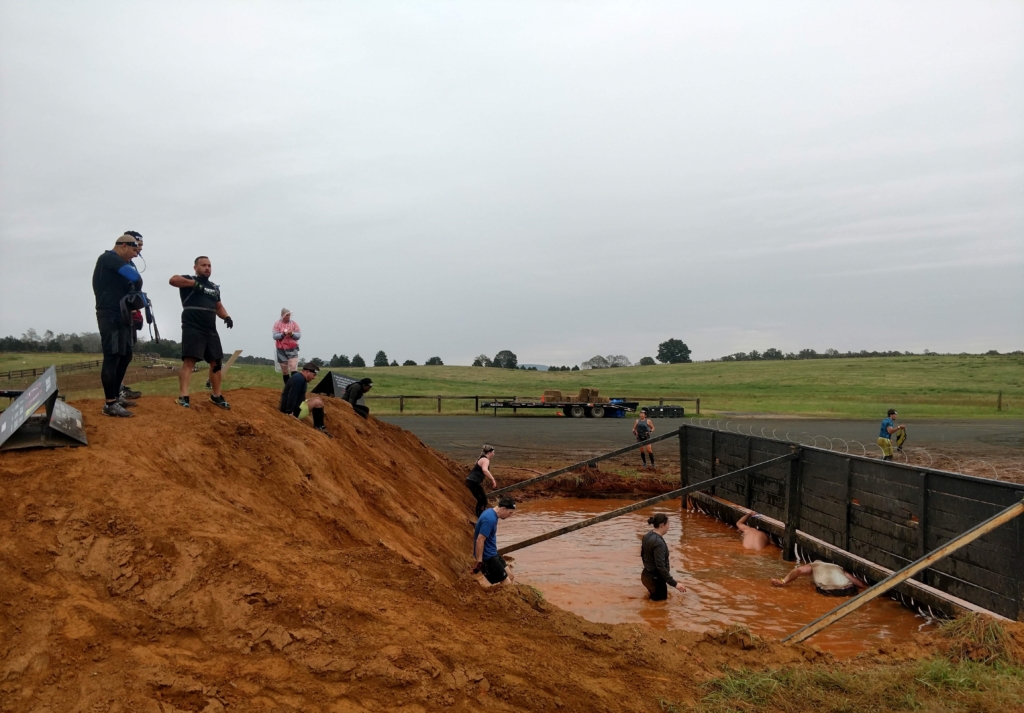 The frigid Dunk Wall. The Rolling Mud obstacle had even taller hills and was much muddier.

The obstacle line-up was exactly what you’d expect from a Spartan Super event. Even so, They did a good job mixing up the order of the obstacles. They placed the Barbed Wire Crawl, Monkey Bars, Dunk Wall, and Slip Wall all within the first mile. Unlike many other races where they put a grip-intensive gauntlet at the end, on this course, they spread those obstacles out over the course. For example, Twister was placed in the first half and Olympus was right around mile 6. The Multi-Rig was within the last half mile, but it also wasn’t right before the finish line. 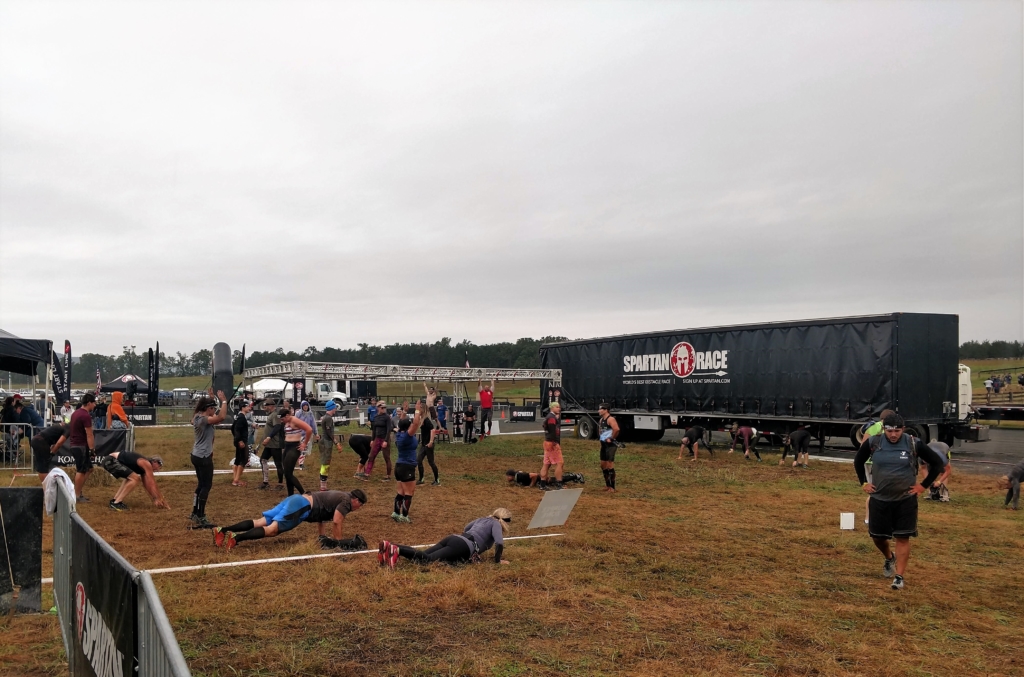 Plenty of burpees to be had once the rain started

They finished up the race with the Spear Throw and the Inverted Wall. It was a very damp morning though and it began raining right around 10:00 AM which instantly made any grip obstacle that much more challenging. They also had the 7-foot wall immediately after the tallest, slipperiest, muddiest Rolling Mud I have ever encountered which made the wall a slick and formidable obstacle. This was, of course, followed by the rope climb. The wet, mud-covered ropes proved too difficult for most racers and the burpee pit was packed.

Spartan really demonstrated why they are such a dominating force in this sport. They took the time to design a course that had a fun, varied, and interesting layout. It was clear that they looked for challenges where others might have missed them. The mixed up obstacle distribution kept the race fresh and made some obstacles easier and others harder. The event was well thought out and was executed with precision. This event was challenging, but it was also equally fun. While the demanding mountain races earn you a certain amount of respect, sometimes it’s nice to be able to just run, get muddy,  and have a good time. And that is exactly what Spartan delivered with this race. 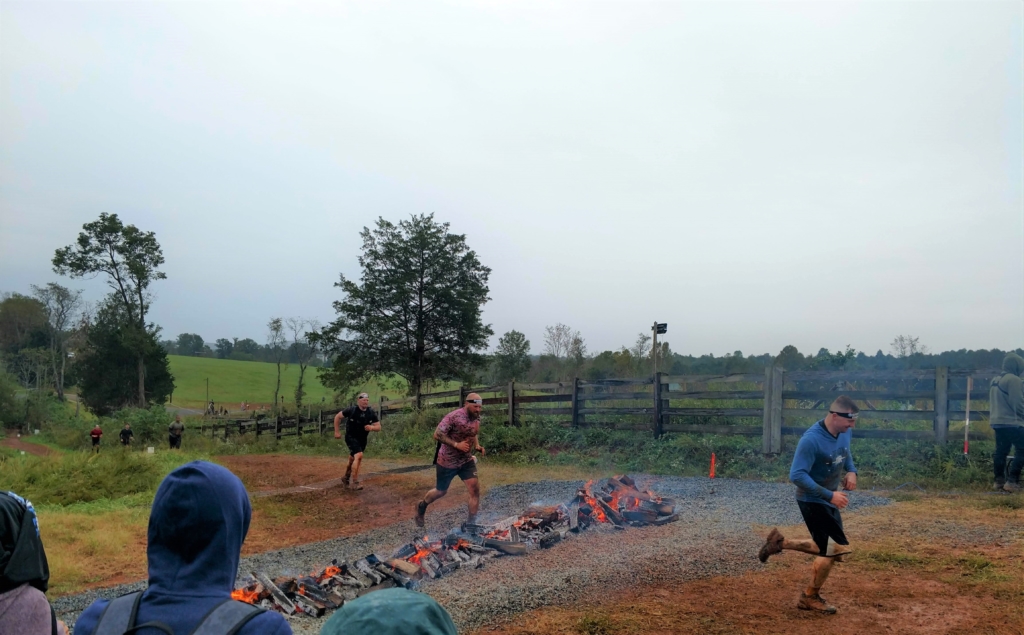