Tougher Mudder Dallas – Mud with a side of Mud

Now that’s it’s the start of fall, OCR is back in full swing in Texas for the next few months.  Tougher Mudder came to Dallas the weekend of September 29th and it was one hell of a muddy course.

And then there was mud, and it was glorious?

When I ran the Toughest Mudder this past May, I thought I had ran the muddiest course yet.  If I’m being honest, this Tough/Tougher Mudder was the muddiest course I’ve done to date.  In Toughest, there was a quarter mile or so of mud that was so slick and sticky, that it was hard to move and get through.

This was due to rain that had happened earlier in the day/the day before that caused the course to just have that extra bit of wetness.  That quarter mile was a sort of sloshy, slick and sticky mud.  All 10 miles of this Tougher course was that type of mud.

To indicate how bad the mud truly was, imagine trying to wade through molasses and having mud stick to your shoes like cement.  I even lost my shoe for a moment in the first mile, and had to quickly stop to put it back on.  Even after jumping into water obstacles, it would just clump right back up. 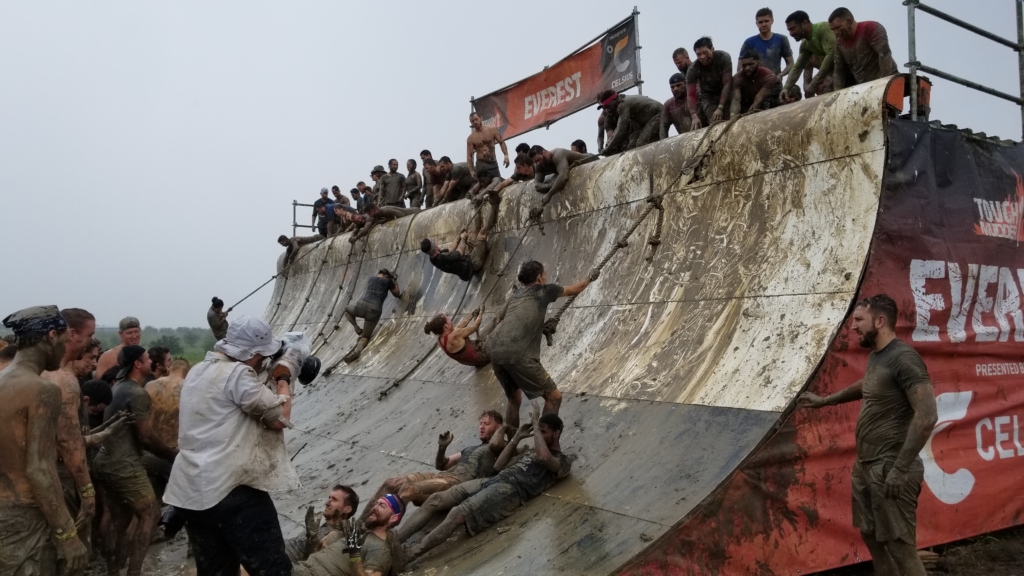 Everest itself took 30 minutes for the Tougher wave to get through, with much slipping and sliding.  The Tough Mudder waves lines for Everest looked like it would take some people maybe an hour to get through.  I nearly saw someone take out a group of people like a bowling ball would pins.

The mud was intense due to much rain days before as well as during the whole race itself.  To even indicate how crazy the weather had made the mud, Mudder Village itself was a mud bath that even kids were enjoying.  My after-race rinse was a waste of time.  Changing into new shoes was a terrible idea as they became muddy and a complete mess before I could even start taking photos.

Venue – Yes, let's do this one again!

Now onto feedback about the race/event itself and not so much the weather.  Last year, when I wrote the review of Dallas’ Tough Mudder, the number one feedback I had at that time was the event location.  I was happy to see a change of venue for this year, and welcome coming back to this venue in a future Tough Mudder.  There is lots of space to do plenty of different races out here, with all the hills, lakes, and tons of offroading mud goodness.

To speak about the Tough/Tougher Mudder Course, the map itself was not accurate to the obstacles we actually did.  Case in point, we did Mud Mile, Berlin Wall, Pork Soda, Blockness and Quagmire twice (those are the ones that come to my mind).  I will just flat out say, I think for courses where there is a Toughest Mudder, the loop in a way can make a complete sense given that we are doing 5-mile loops.  However, on courses where there isn't a Toughest option, I am not a fan at all of the looping structure.

Not jumping for joy with loops

In a general sense though, I will come out and say I am not a fan of the looping structure as it is now.  If it is possible to do two different 5-mile loops completely different parts of the course, that would be ideal to me.  Set up different obstacles on these truly different loops where traffic doesn’t intersect.  For myself, I’m not going to fully write off loops as being a terrible format just yet, because I do think they can be done in a good format. However, Tough Mudder already announced in 2019 they are going back to a single loop format.

Another big problem I ran into was that in doing the loops, we went through similar loops for Tougher and Tough Mudder participants.  What this means, if there was a queue due to Tough Mudder participants, Tougher competitors would have to be queued up as well.  I knew I wasn’t going to get that cash prize by any means, but I did want to see how fast timing wise I would be able to achieve and this did put a damper on some of that.

While I’m on the note of Tougher feedback, not having Volunteers or staff at EACH obstacle to indicate an attempt, or the penalty to keep your jersey was something I noticed and wasn't happy about.  In Tougher Mudder, part of the spirit of this is doing each obstacle and attempting/completing all of them.  Before I had gotten to Mud Mile 2.0 for the second time, I had passed up a group of 4 or 5 other Tougher competitors.  I jumped into Mud Mile, and these individuals just kept walking by.  When I gave them a look and asked what they were doing, the response was, “We’re already behind on time, and have done this so we’re moving on.”  As a person who is truly trying to get an idea of where I stand among competitors, this bothered me.  Especially because I do expect that staff would be there to call them out.  I can imagine others could and would feel that way.  By all means, I don’t mean that non-competitors should not be in the wave, but they should be willing to perform as required of wearing that jersey.

Can you find the spectator path? Neither could I.

The last piece of feedback I have on the Tough Mudder side was the spectator course. After I was done with my race, I was left to go out to the course and get photos and media.  When I left the start line, I did not understand where the spectator route started. The path was sort of marked by flags that indicated there’s a spectator path nearby, but with no indication of which was a spectator path or mudder path.  I even saw other spectators confused, and walking in a mudder path at one point.  As I talked to other spectators in passing, there was agreement that the paths could be better marked.  Maybe in the future with something to make the path a little clearer for spectators, possibly purples arrows if that's the pattern we're going for with Tough Mudder.

Final Thoughts – where to go from here?

While the venue itself was good, I was disappointed in a lot of the event itself, and not because of the turmoil caused by the unforeseen weather.  Tough Mudders are what got me into this sport, and have I been a die-hard fan of their races, however, this one was a letdown.

Between the feedback about loops, Spectator route, competitive drama, there is one last thing I'd like to point out.  These races aren't cheap – they are roughly 200 dollars a race!  I feel something has changed as of recent when it comes to Tough Mudder.  I wear my finisher shirts with pride and am not a fan of the cheaper/thinner material.  Especially my Toughest Mudder shirt which has holes in it after a few uses.  I would love to see Tough Mudder go back to basics, especially course wise and finisher swag wise.  If I had to rate this race, it'd be a 2.5/5 overall.