Elite Obstacle Course Racers Vie for More Than $110,000 Across Five-Events as part of the Spartan Global Championship Series 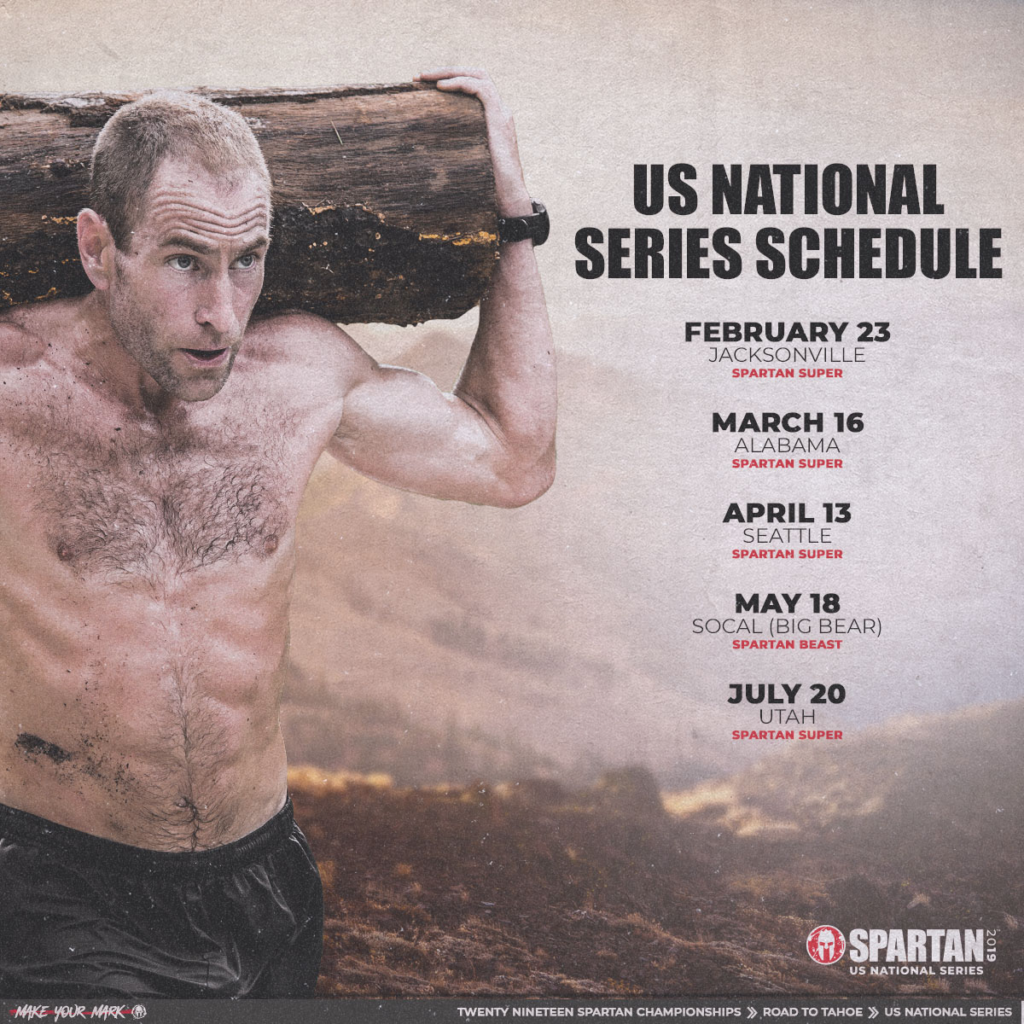 BOSTON, MA (December 21, 2018) – The country’s best endurance athletes will vie for more than $110,000 in prize money during the 2019 Spartan US National Series, which unfolds across five cities. Kicking-off February 23 at a new race venue in the warmth of Jacksonville, FL, the competitive Obstacle Racing (OCR) series leads to the regional 2019 Spartan North American Championship which will be announced at a later date.

“The US National Series sees the nation’s best athletes battling on the Spartan race course and every year, they raise the bar on the competition, and this season will not disappoint,” said Spartan Founder and CEO Joe De Sena. “With new untested venues and returning courses that brought racers to their limits in previous years, the series will
test the mettle and grit of Spartan athletes as they vie for one of the largest prize purses in the sport.”

After the fast and flat course in Jacksonville, the series heads to a swampy new venue in Saraland, AL March 16 before returning to scenic Snohomish, WA April 13 followed by mountains of Southern California’s Big Bear Lake May 18. The National Series champions will be crowned at the finale in Huntsville, UT on July 20, based on cumulative series ranking points. Four of the U.S. Championship events feature Spartan’s signature “Super” race format featuring eight-miles of terrain and 25 obstacles, while Big Bear Lake boasts a “Beast” race course with 12-
miles and 30 obstacles.

As the series progresses, rivalries will form with reining Spartan Women’s World Champion and US National Series Champion Lindsay Webster expected to return to defend her title against the likes of Rea Kolbl and Faye Stenning while Men’s US National Series Champion Ryan Woods looks to stay ahead of Robert Killian and Ryan Kent among the field of elite athletes. As a leader in the Sport of OCR, Spartan has expanded its age group categories for the 2019 season from six to ten, splitting the 30 – 39, 40 – 49, and 50+ age groups in two in each category respectively, which creates the fields of 30 – 34, 35 – 39, 40 – 44, 45 – 49, 50 – 54, 55 – 59, and the new 60+.

Unfolding across more than 40 countries, the 2019 Spartan Global Championship Series features 14 National Series races leading to stand-alone championship events in five regions (North America, South America, Europe, Asia-Pacific, and the Middle East & Africa), paving the road to the 2019 World Championship powered by Rakuten in North Lake Tahoe, CA. Anyone can enter National Series events and the top 10 male and female elite and age group finishers from each unlock entry into their nearest championship. The final leaderboard for each series determines who earns spots at the World Championship via a “roll-down week,” starting with first place. Elite spots are scarce with just 600 total available (300 men and 300 women) and only 1000 for age groupers (200 per age group, 100 male and 100 female).

Fans can catch the action of all Spartan US National Series races live on Facebook WATCH via the Spartan TV Page.

Each weekend also offers opportunities for athletes of all ages and skill levels to hit the race course with open heats at the varying distances of Spartan’s signature “Sprint,” “Super” and “Beast” race courses. Spartan Kids races are also offered at each venue for youth ages four to 13. To register and learn more visit Spartan.com.