I was stoked to return to ‘Dega after missing last year’s event due to injury. The Bonefrog team made some tweaks between 2017 and 2019, some for the better and others for the worse. Let’s dig in.

I was fortunate enough to be staying at the hotel hosting early packet pickup, so check in was a breeze for me. I was even able to get my right-hand man in last minute to help with media duties and still have plenty of time to get situated. What I love about the Speedway is that running water is the norm. Even along the course, actual bathrooms were open to racers which is a big win in my book at any event, particularly those that run several hours.

There were a few booths in the festival area, and the military presence was aptly represented at this Navy SEAL-designed operation. Unfortunately, I missed out on the majority of the party running the Endurance heat since most booths packed up and shipped out long before the last Endurance racers crossed the finish line. Even though the Trident and Endurance heats were among the small percentage of racers that day, it was a bit sad since all I could think about after 6.5 hours on course was real food. Don’t get me wrong—my doses of Tailwind did the trick throughout the race beautifully, but I was straight up HANGRY once I slowed down physically and physiologically. Still, I can appreciate that the crew at beer tent stuck around for all of us trudging ‘til the end. And get this—the beer was even still cold! 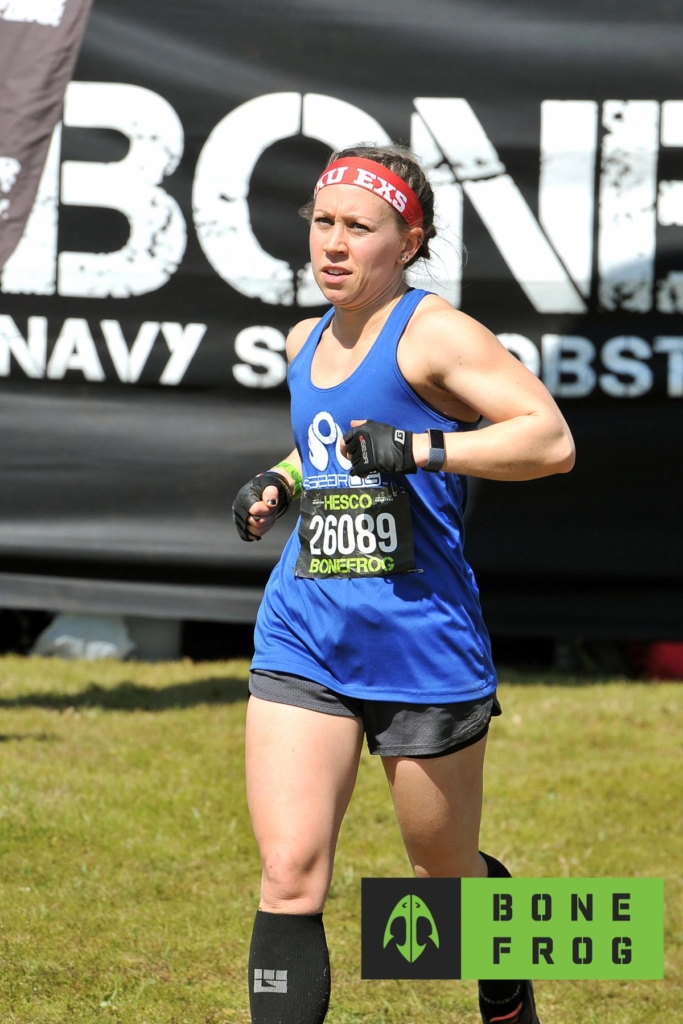 Honestly, I was a nervous wreck entering my first trial of endurance. Everyone in the corral was shivering along with me, though many of these were attempts at retaining body head given temperatures started in the mid-40s at launch. I was, however, a little underwhelmed by the hype preceding the launch itself though. Everyone was encouraging, sure, but it just didn’t have the impact it did when Coach Pain motivated the hell out of the racers before launch. On the other side of that, I can appreciate that all waves seemed to launch right on time.

The Sprint loop was entirely on the infield of the speedway and the Challenge course didn’t stray outside the gates by much. Only the Challenge course runners were treated to a mud bath, though that was minimal with a thigh-high water crossing (Okay, probably knee-high for most!) and just a few yards trudging through the muddy bank. I, for one, am not complaining about lack of mud. That is exactly what I expected and enjoy about this course. Aside from a very brief sandbag stair carry repeat and a few passes in the grandstand in the Challenge course portion, elevation was minimal as well. This made my legs feel very comfortable about pressing on, posting double-digit mileage. Classic rock blared from the grandstand so tunes were aplenty all day along the course which was a welcome reprieve from my growing thoughts of pressure and pain as laps built.

Bonefrog races stand out from other brands with the inclusion of the hero “obstacles,” which require racers to say the names of fallen heroes as they bang out reps before proceeding. Peppering the run are traditional gym moves like the pull-up, dip, and non-penalty burpees works perfect here. This year, Talladega made these challenges exclusive to the Challenge racers, which makes me feel like Sprint racers missed out on something special.

The Stronghold and Chopper rigs have undergone changes over the years, and these were still the big band-stealers for the elites of the day as Bonefrog required Elite racers to not only successfully complete the obstacles before moving on, but also demanded the penalty be paid for each failed attempt. That meant 25 burpees stood in the way of each subsequent attempt at the Chopper. Let’s just say that I saw a ton of burpees during my 5 laps. Ultimately, wingspan played a critical role in success at these, so the vertically challenged racers were at a significant disadvantage in this final gauntlet where these were placed. 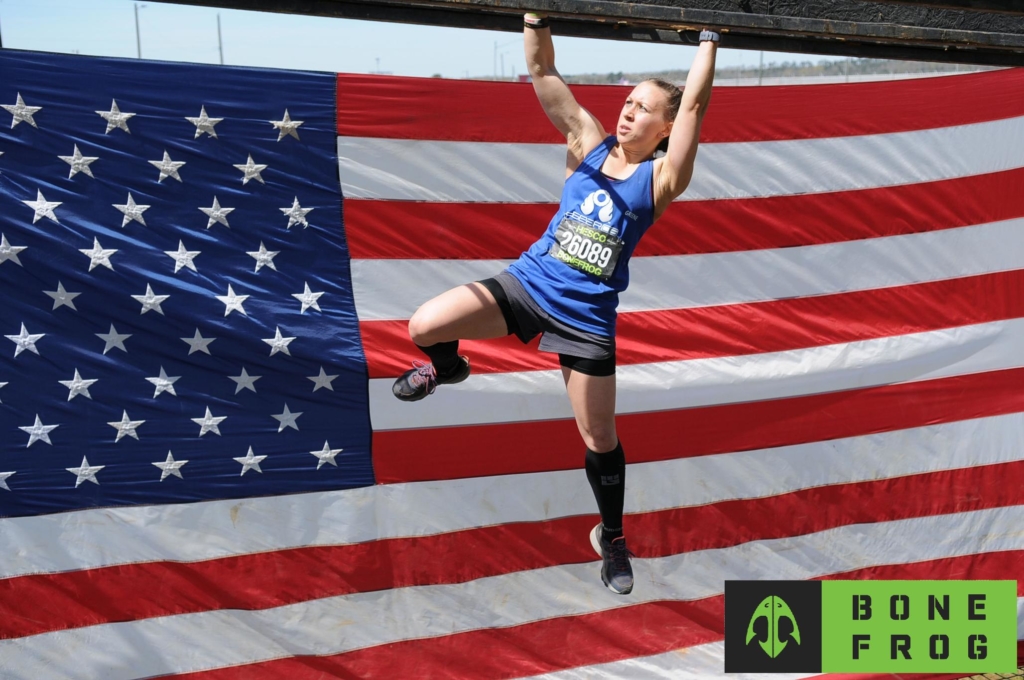 I’m a bit torn on Bonefrog’s decision to stack the standard meat and potato obstacles (walls and throughs) one right after the other in an open field. The zig-zagging run 100 yards down and back to a wall, repeat into slightly bigger wall, repeat into tallest wall then the same pattern for through walls got a little old after 3 laps, served as a bit of a breather physically, but this design of mental monotony served as its own feat of willpower—a secret menu obstacle, if you will. Add this to the zero relief from shade save the Endurance tent, brains were getting scrambled in the p.m.

Even if I’ve been a bit critical of the Talladega Bonefrog, but I can’t complain much because I still *mostly* had a smile on my face after 20+ miles. Swinging off my 5th pass of Black Ops knowing I’d nailed my goals melted away most of my hiccups right then and there. Bonefrog still has some growing pains to address to be a leader in the OCR field, but I truly enjoyed my day, bruises, burns, and all. Plus, the Endurance medal is a marvelous accolade that I’m exceedingly proud to add to my collection. The first place finish in the open Endurance division was just the cherry on top of a killer day! 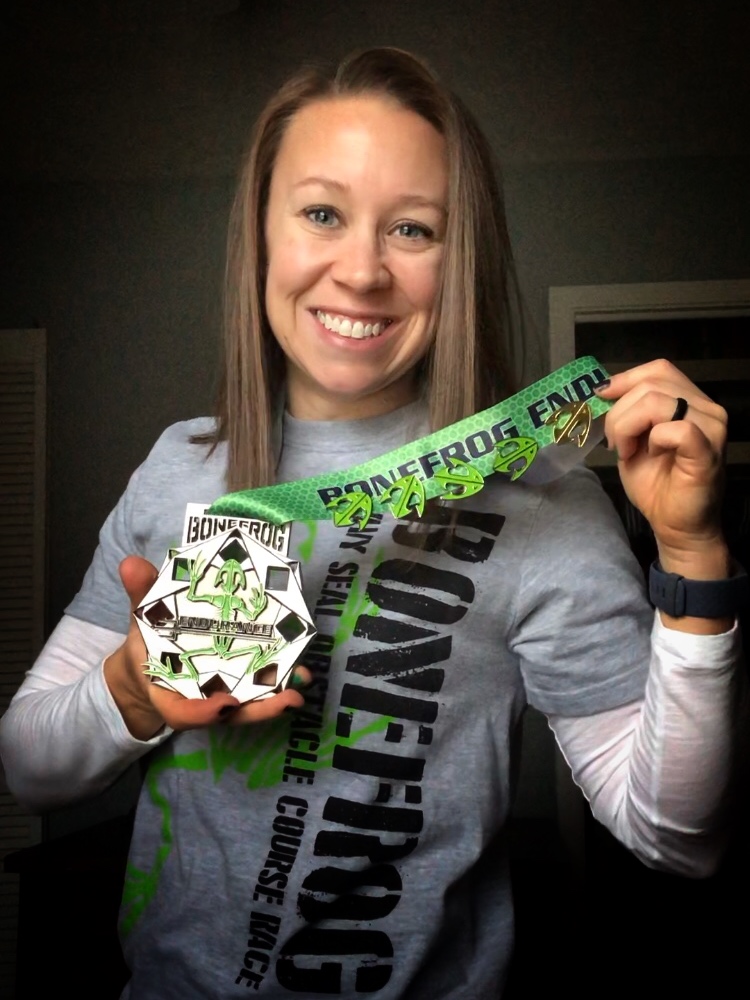 This author is part of the Mud Run Crew and received a free race entry in return for an independent review. All opinions are those of the author and were not influenced by the race sponsor or Mud Run Guide.
By Hillary J. Greene|2019-04-09T12:10:32-04:00April 15th, 2019|Race Recap|0 Comments