You're such a Savage…

Savage Race Boston held its third annual race at Carter Stevens Farm in Barre, MA on July 13th and 14th. This venue is no stranger to holding obstacle course races, having hosted Spartan Race and Bonefrog over the last few years. In addition to being a great venue for OCR, it’s also the home of Stone Cow Brewery, which not only has some amazing beer but kick-ass BBQ and ice cream to boot. Before you start fantasizing about IPA’s, pork belly and waffle cones, let's talk about the race.

Since I began racing, I have run this course over a handful of times. Up until 2018, Spartan called this venue home for both Sprint and Super weekends, so I have seen this venue laid out a number of ways. There are a few things you can always count on at this venue. The first is the cows. Walking into the registration, you pass by a bunch of cows and depending on the route of the course you pass more mid-race. Expect to have an intense craving for a rare hamburger after. Normally this is where I would tell you to be prepared to dodge cow patties, but I have to say, over the last year or so, the farm and race directors have steered racers away from one less obstacle. This is also a runners course, while it has minimal elevation you do have to watch your ankles. There are times you are in the direct sun running through the fields, but make no mistake, there are huge divots you need to avoid. As someone who is rehabbing a sprained ankle, the first two hundred yards were the worst. 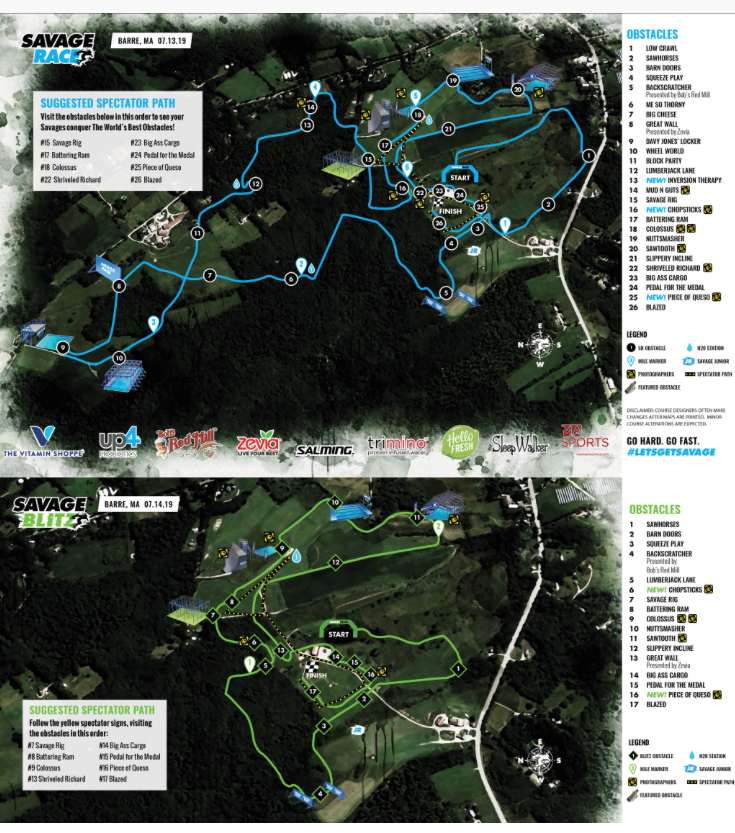 While we are on the subject of terrain, let’s dive a little deeper into the course itself. This was my second year racing Savage. I had such an awesome experience last year I was really looking forward to seeing what they had up their sleeves this year. Savage laid out 26 obstacles over the 6.6-mile course. Inversion therapy, Chopsticks and Piece of Queso are all part of the new 2019 obstacle class Savage debuted this year.  To be clear, Queso and Chopsticks were not, in fact, at the end of either of those obstacles. More on that in a bit. While it was a steamy 85 degrees and humid on race day, we did have some heavy rain the night before. This lead to nature creating some major mud pits. The first encounter of said pits was less than half a mile into the race. Now at that point, the open heat hadn’t thinned out just yet so you were just trying to make it through. Sadly my left shoe was victim to the mud pit. I honestly thought I had tied my shoes tight enough with my ankle brace but I was wrong. I grabbed the shoe, did not throw it into the woods or at anyone, and kept going.  When it cleared a bit I jammed that shoe back on because like hell I was going to spend another $150+ on a pair of Innov8s. Happy to report it stayed on for the rest of the race. Yes, before you even ask, I did triple check to make sure my shoes were double knotted and tied tight enough (or so I thought). 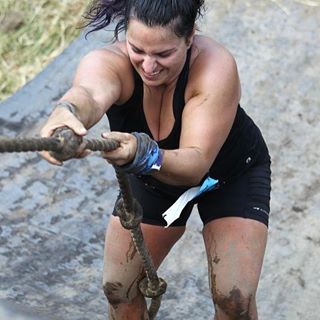 All aboard the hot mess express

Having raced Savage last year, I was familiar with many of these obstacles and knew which ones I would get hung up on. Enter in Davy Jones' Locker. I’m talking about the ninth obstacle on this course and not the captain of the Flying Dutchman. If you have gone off this obstacle, you may understand the feeling I am about to describe. All you have to do is climb up a ladder to a swim platform and jump-off. Easy enough right?  Savage claims it is only 15ft from the ground but when you are up there looking down it feels a LOT higher than 15ft. For some people, the hesitation is the height. For me its the drop, where you are like Tom Petty and “free falling” and have zero control until you hit the water. The best way have I found to approach the obstacle is to let the volunteer know you need to walk right up and go. So yes my heart rate spiked, my stomach flipped as I climbed up the ladder but then I shut the brain off (as best I could) and jumped. The water was refreshing and a huge wave of relief washed over as I conquered Davy Jones' locker. When going down Colossus I have a very similar feeling. To get a bit philosophical here these moments serve as a reminder as to why we do these obstacle races. Is it to prove to yourself that we are good enough? Maybe it’s to overcome a fear of heights? 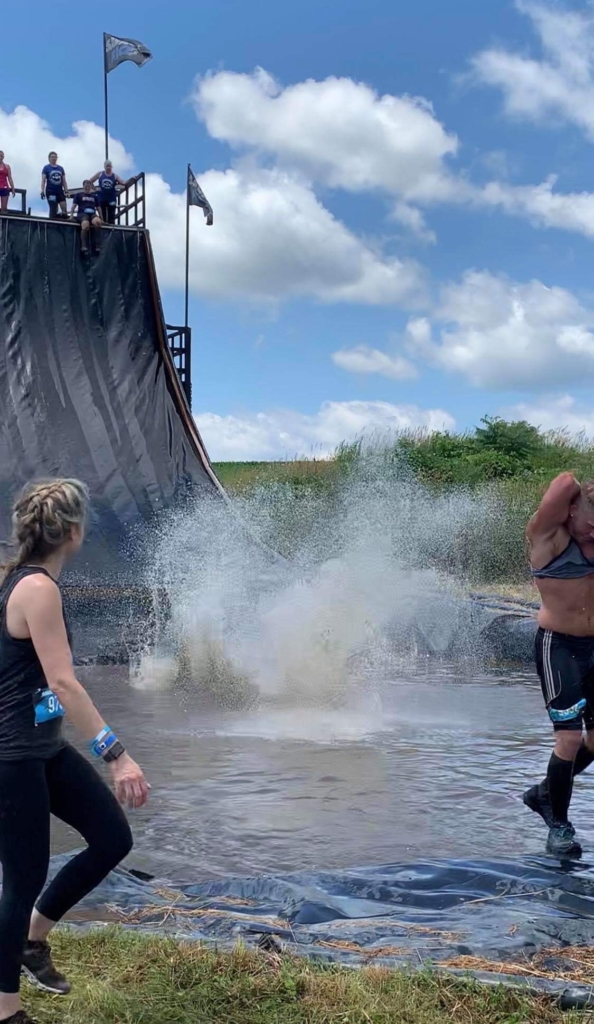 Be like Elsa and “let it go” on Colossus

Miles one through I’d say about three had obstacles that were fairly spaced out. At times you felt as if you were doing more running than anything. I face-planted about three times over my own two feet on the trails at this point of the race. I blame it on the muddy shoe back at the half-mile mark. As we moved through the miles they became more dense with obstacles. I liked a lot of the obstacles Savage has to offer as it’s a nice mix of climbing, crawling, jumping and grip. Some races tend to evolve the obstacles by creating more elaborate rigs. As someone whose weakness is rig-based obstacles,  having more obstacles in a race that are rig focused can be frustrating. To be clear, if you want me to hang all day say from a child’s monkey bar I’m your girl. It’s just that whole forward motion thing that screws me up. Last years course Savage did have more rig/upper body focused obstacles so I was very happy with the obstacle choices this year. Speaking of which, let's discuss the new obstacles we saw this year.

As mentioned before Savage mixed in Piece of Queso, Chopsticks and Inversion Therapy. You should probably read that sentence back in your best Julia Child’s voice as it sounds like it could be a culinary masterpiece. “Take one piece of queso and mix some fava beans into this inversion therapy delight and combine with your chopsticks.” On second thought that sounds like Hannibal Lecter…..

Kidding and chianti aside, I really enjoyed Chopsticks. There are long, vertical pieces of narrow wood with very small areas to put your foot. The goal is to get to the other side while moving across said pieces of wood. This obstacle combines grip, arm and lower body strength as well as balance and core. Creating momentum while moving from one piece of wood to the other was key, I learned at the very end if you lost momentum you were kind of screwed. I was stuck at the very last stick and was unable to reach the bell. Until my friend gave me a nice little push. For a moment I felt like a toddler at the park being pushed in the swing set. Until I hit the bell and came back to reality, that is.

Inversion Therapy was about two feet off the ground and required your entire body to be pressed again a pipe and ladder. I surprised myself with how easy I moved through that obstacle. Historically, when I attempt an obstacle like the Tyrolean Traverse at Spartan, I generally get halfway and my calves cramp. What did I say to the Lord of Calf Cramps? NOT TODAY! So on I went….

Piece of Queso was the final new obstacle we saw. It is a combination of a sheet, ropes, and these large blue boards that look like cut pieces of plastic swiss cheese. Let me start by saying swiss cheese is not my preferred cheese of choice. I’m more of a smoked gouda gal. The lane I chose started with a looped piece of sheet that was just out of my reach. When you are 5’5″ on a good day, you have to basically jump and hope for the best. I jumped and grabbed on for dear life. Then came this blue plastic piece of cheese that was perpendicular to my body. I kipped and built up momentum to make the transition. Apparently, I was overly enthusiastic because I slammed into the board and now have bruises in places that one should never have bruises. 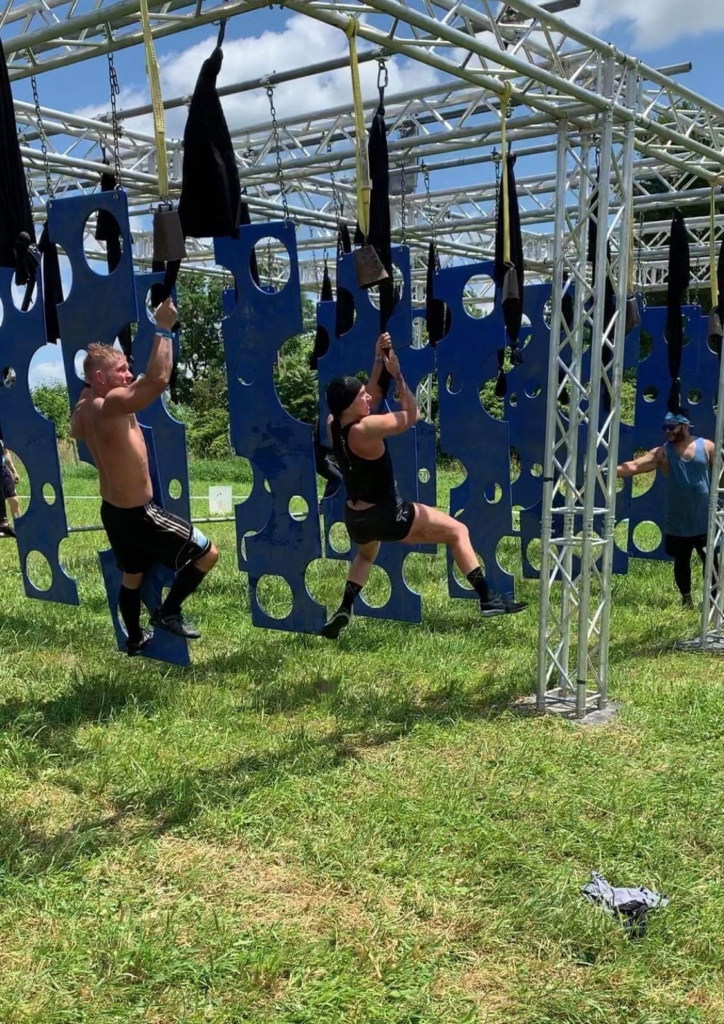 My friends who completed piece of queso unscathed.

Even though I was the conductor of the hot mess express at this race, I shaved 21 minutes off my time from last year. This is a good time to mention my timing chip came off, I think at Shriveled Richard and I didn’t realize it until the end of the race. Thankfully I had my Garmin running and I captured my unofficial time, because if it's not on Strava did it even happen?!  Bumps, bruises, muddy shoes, face plants and all I really had a blast at Savage race. I ran with someone who experienced her first Savage Race and her second OCR race ever. Everyone, and I mean everyone, was smiling, laughing and really enjoying themselves on the course. Savage always seems to put on a very chill, fun, easy-going race where the goal is to have fun. My only criticism outside of the blue plastic cheese is to have more photographers on the course. I mean I’m never going to place in these races so why not be a vain human and do it for the photo ops? 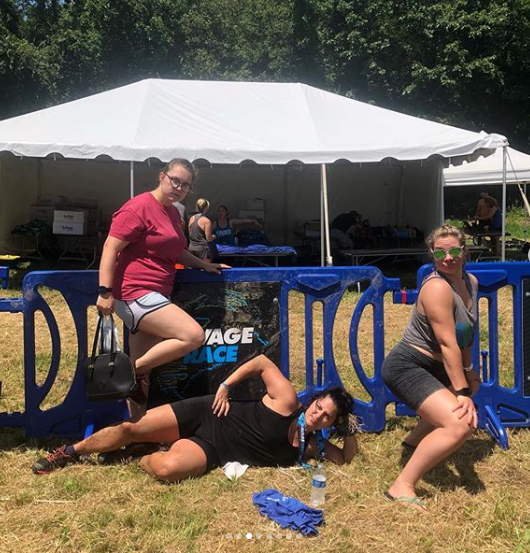 Eat your heart out Sports Illustrated

If you are thinking about getting into OCR or maybe have done some OCR’s and haven’t done Savage, I STRONGLY encourage you to check this company out. I believe you get your money’s worth out of this race which includes swag, registration, course and the festival area. I do want to note the free beer at this race was from Stone Cow, I like that they support local vs watered-down Coors Light. For those who don’t think they can do the seven miles, Savage offers a Blitz series which is roughly 17 obstacles on a 5k course.

So let me ask you, are you ready to get Savage? 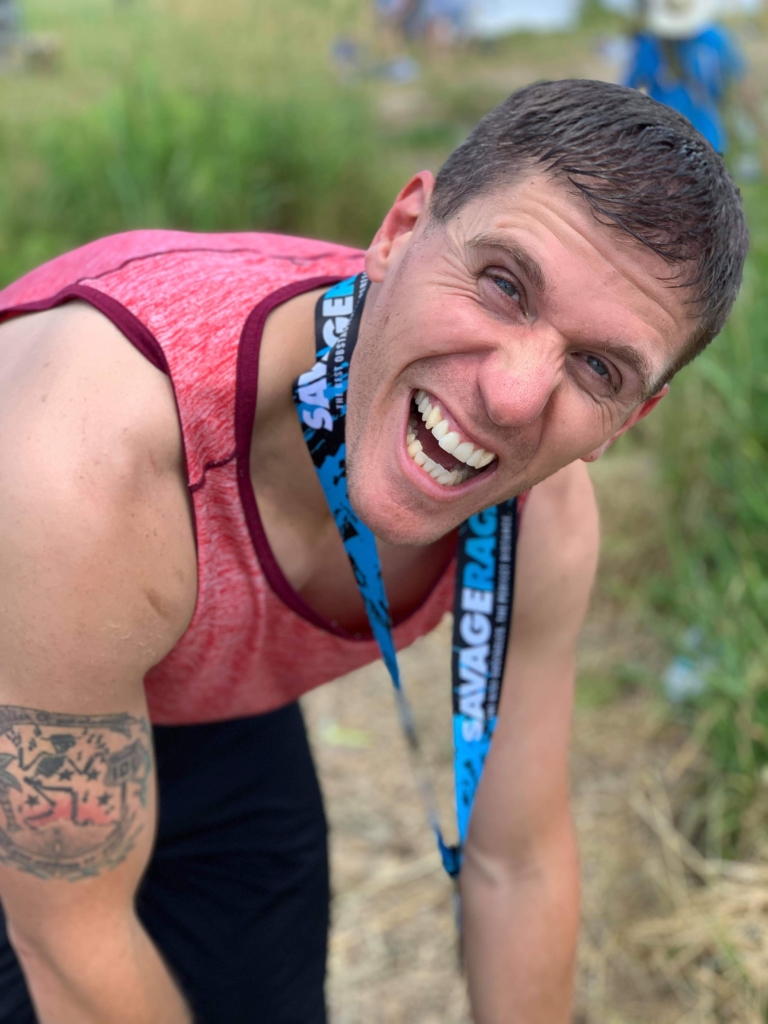 This author is part of the Mud Run Crew and received a free race entry in return for an independent review. All opinions are those of the author and were not influenced by the race sponsor or Mud Run Guide.
By Alexis Haddad|2019-07-23T17:15:08+00:00July 25th, 2019|Race Recap|0 Comments

Alexis fell in love with OCR 2014. Prior to this she grew up playing various sports and dancing since the age of two where she competed regionally and nationally. She earned her degree in Political Science/Dance Performance from Roger Williams University in Bristol, RI. When she is not running in the mud she works as a Senior Recruiter for Nutanix.You can usually recognize Alexis at races by her loud mouth, purple hair and a coffee in her hand. She resides in Worcester, Massachusetts.