OCR is evolving, and as obstacle course racing continues to grow across the country and world, we are beginning to notice new formats ninja competitions, relay events, and now, a heptathlon gaining ground.

So here, we take a look at The D.R.X. Obstacle Games to explore a different way to “OCR.”

Competitors compete in the 3rd event: the Tire Pull and Drag

On August 25, 2019, I attended the D.R.X. Obstacle Games in Columbus, Ohio (as a spectator). The games took place at the Jewish Community Center of Greater Columbus on the Black Diamond Obstacle Course – a permanent OCR training course on site. 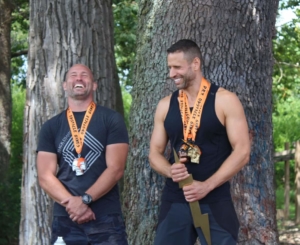 The event brings out both competition and comradeship in participants.

The D.R.X. games are a part of the Dirt Runner series that offers day and night trail runs, mud runs and training events. In line with its mission that “life’s better when conquered”, the D.R.X. game challenges just that!  In a nutshell, the D.R.X. Obstacle Games is an obstacle based heptathlon competition; a series of seven physical events designed to test competitors’ strength, speed and endurance.

As a spectator, one thing I observed right when I arrived was that this event catered to a variety of athletes. Some competitors I recognized as loyal local-OCR participants, while others were new faces – fitness and crossfit enthusiasts drawn in by the aspect of strength and excited to try their hand at OCR for the first time.

The event drew in 14 female competitors and 24 males (which was quite an increase from the crowd in 2018, which was just 4 females and 8 males). Based on this we can expect the event to continue to grow and draw in fierce competition in locations and years to come. 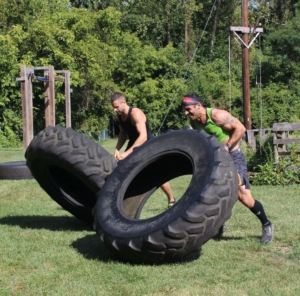 Competitors face off to complete the 5th event: Tire Flips

1) Tire Jumps: Similar to a box jump, competitors completed as many tire jumps as possible in 1 minute.

2) Rope Climb: Competitors completed as many rope climbs as possible in 1 minute.

5) Tire Flips: Competitors completed as many tire flips as possible in 1 minute.

6) Farmers Walk and Carry: Competitors completed a 50 yard farmers carry with cement blocks (*70 pounds for men/40 for women), then after returning to the start position, used one of the blocks to complete “bucket carry”. This segment too was for fastest time. 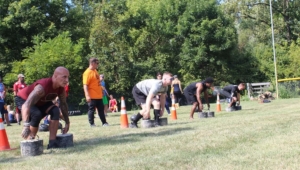 Competitors line up to complete the 6th event: the Farmer's Walk and Carry

7) 1 mile dash with 10+ obstacles: Competitors completed a shortened, adapted version of the Black Diamond Obstacle Course. The course included an 8 foot wall, slip wall, monkey bars, tire flip, tire pull and drag, atlas carry, and more. What made the course especially grueling for competitors was that the first obstacle, just 100 yards from the start line, was to complete 50 burpees. While this was brutal for the athletes, especially after already completing in the 6 previous events, it was a fantastic, strategic method to space out competitors for the remainder of the course. The course tested runners by enforcing obstacle completion (or suffering burpee penalties) and challenged participants to again, aim for the fastest time.

In the first 6 segments, 2-5 competitors were able to compete at one time, and as a spectator, I was able to follow the crowd of competitors from station to station to watch each event. Even on the last event, the obstacle course dash, I was able to see over 50% of the course and obstacles from a central field area. The event ran from 9am until approximately 12:30pm and flow of the event was very smooth.

Competitors earned points based on their performance against other participants in each segment. For example, once all competitors completed an event, they were ranked and given respective points for their placement in the group. For example, in the segment of tire jumps, competitors were ranked based on the number of jumps they completed in one minute.  For each of the segments, volunteers were present to count reps and clock times.

One aspect I found surprising, was that participants were not updated of the rankings throughout the event; rather, they were encouraged to give 100% at all times, as they did not know if they were in first or last place. I think that in the future it would be interesting to update the competitors of the rankings periodically throughout the event.

The Swag and Awards:

All participants received a t-shirt and medal for their show of endurance and strength; however, what was really impressive, were the awards for top overall and masters finishers. 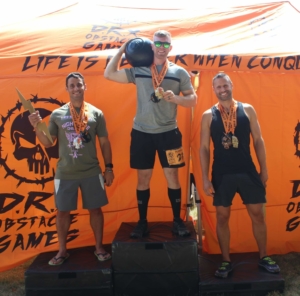 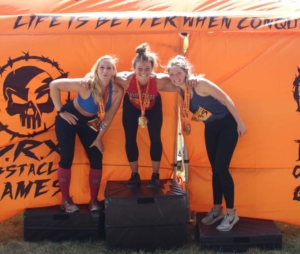 Overall, I rate the event at a 4 out of 5. The event challenged competitors speed, strength, and endurance in a way traditional OCR cannot, and provided a great experience to participants and spectators alike, however, I saw room for improvement in the area of communicating rankings. This event appeared to be extremely challenging, yet, it is open and accessible to athletes of all skill and ability levels and I believe that anyone looking for a way to mix it up in their OCR or fitness routines would appreciate this format and event. I would love to return to another D.R.X. event in the future and will even considering participating myself!

For official scoring, rankings and more information on the event and future events, visit dirtrunner.us!

Photos are courtesy of local photographer, Cynthia Duval, and all event photos can be viewed and downloaded from her Facebook page.