If you don't think the weather plays a part in your experience at an OCR you have obviously never run the same race in cold, rainy, miserable weather and then again on a gorgeous, sunny, fall day. This is my 4th year running City Challenge and, back in April, my son Jack and I showed up to Jersey City revved up to have a fun time running a flat, quick course with some different types of obstacles, but the weather had other plans. Signs blew over from the wind, making us miss obstacles. Two obstacles were closed due to heavy rain, and many volunteers did not show up. We had a good time because we were out doing what we loved, but it wasn't what we were expecting. I was disappointed, I really wanted Jack to get the whole experience. I worried that this race wasn't all I had hyped it up to be. Six months later I  saw it was coming back to my area and I decided to give it another shot. Jack and I headed down to Hoboken, New Jersey and the City Challenge race I had remembered was BACK!

Let me start off by saying that Elvi, the course director, never disappoints with the views. Running around the streets of New Jersey with iconic NYC buildings in the distance is breathtaking. The Empire State Building, One World Trade, and the new skyscrapers at Hudson Yards really drive home the point that you are running an urban obstacle course race. For those of us used to running in the woods and on mountains, the landscape here is such a nice change of pace. As soon as we left the parking garage our surroundings were so calming and I hoped the rest of the day would be this nice. It was. 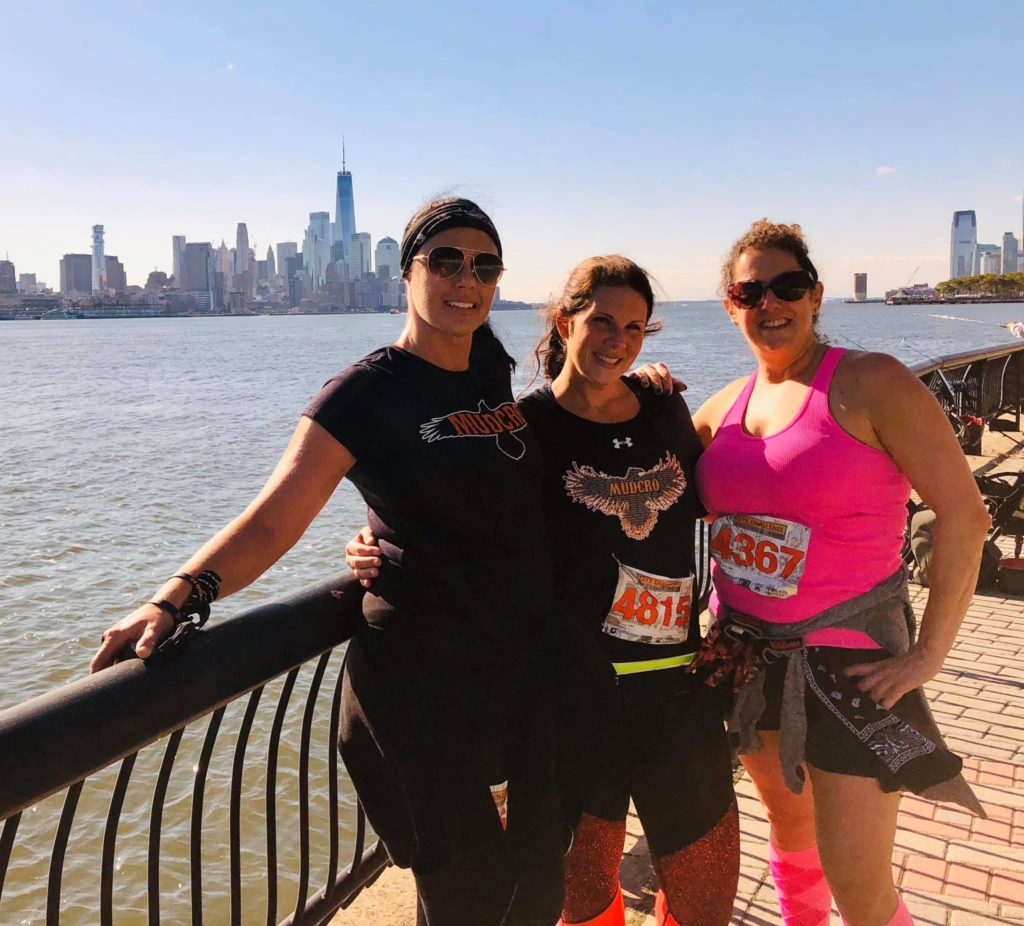 Check-in and bag check were a breeze and the volunteers were super friendly and efficient. Justin Manning was the MC for the day and I found him to be extra engaging with the crowd, especially for so early in the morning. I planned on running with Jack, but after ten seconds he took off and I didn't see him until the end. I really wanted to observe him on the obstacles, but I understood that he's a 17-year-old boy and really wants to push himself and compete. I ran with two women from my team, MUDCRO, and we had a blast.

There is no mud at City Challenge Race and the two locations I have done have been totally flat. I like this because I enjoy variety in my races and I don't feel like you need to kill yourself trekking up mountains or trudge through water every time you go out and get a new medal. There were a lot of walls to climb, but each one had blocks to help you get up or open slats to climb. Since a race like this gets many “newbies” and people running with kids, I think this is great because it makes every obstacle doable. Even someone like me who has been running for 7 years appreciates this. And if you don't want to use them, you don't have to. The race is very customizable. 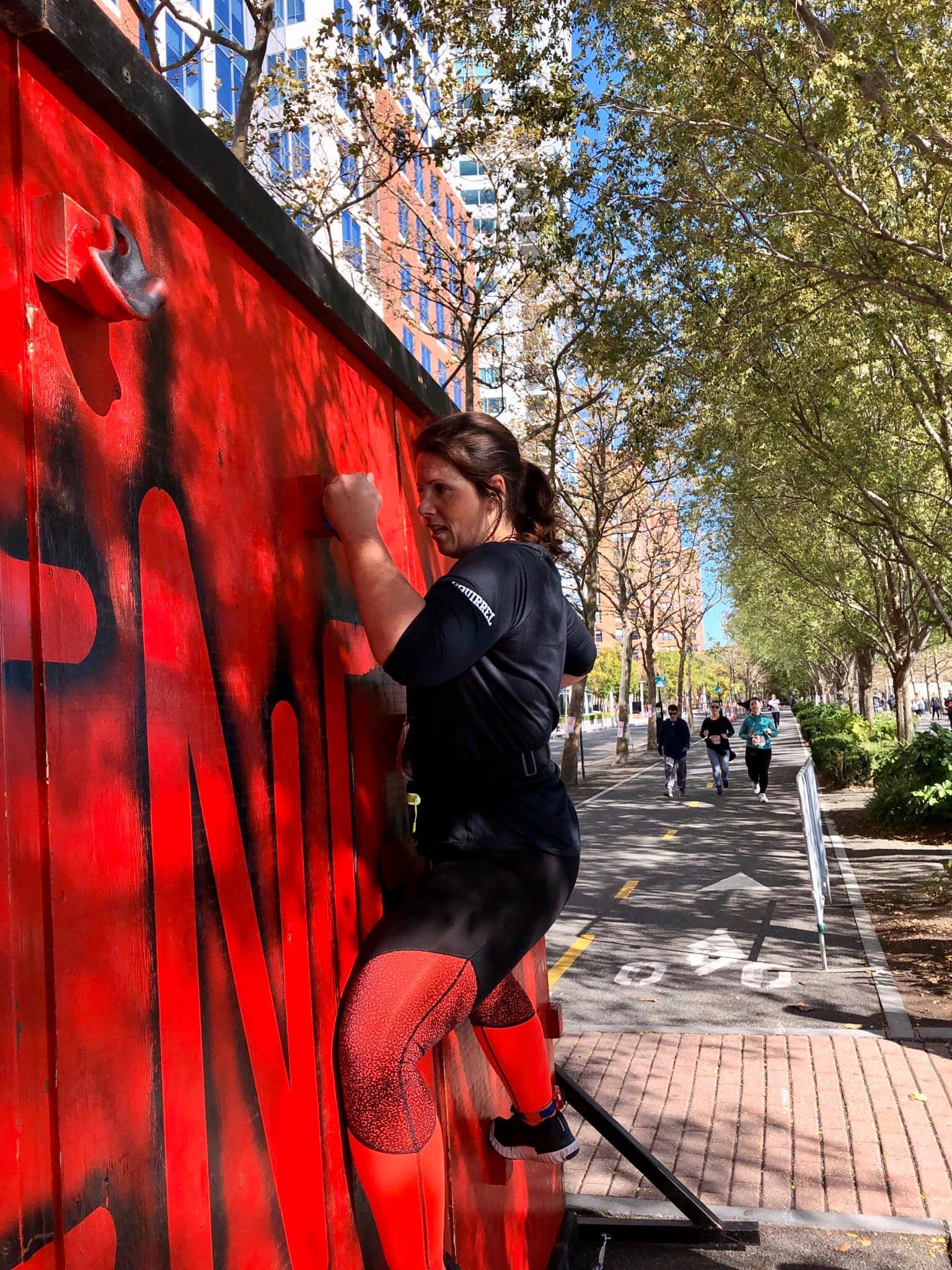 I didn't face backlogs at any of the obstacles and I don't know if it's because I ran the first open wave or because they were so good about only sending a few people out at a time. They seemed to be sending out about 15 people every 3 minutes or so. When we came to the water jug carry we were told there were men's ones and women's ones. All three of us women decided to carry the men's. It was two jugs per person, and we did it only having to put them down to stretch our hands twice.  When we finished the obstacle we found out the difference was 5 gallons per jug vs. 2.5 gallons per jug. We also decided to carry the men's sandbag. The volunteer said she thought the difference was one was 20lbs and one was 30 lbs. I like that races have different carry weights and lets you choose if you are a woman.

Speaking of carrying, the Stacy Williams carry is an obstacle where you and your partner walk or run with each other on your backs. Since there were three of us we switched 1/3 of the way taking turns so that each of us got a chance to carry and be carried. We saw some men just walking next to each other and when we asked them what they were doing they said, “There's no way we can lift each other.” I pointed out that we were three women achieving it and then we all laughed. I was only joking with them as I am not “obstacle police” and I feel everyone should run their own race. 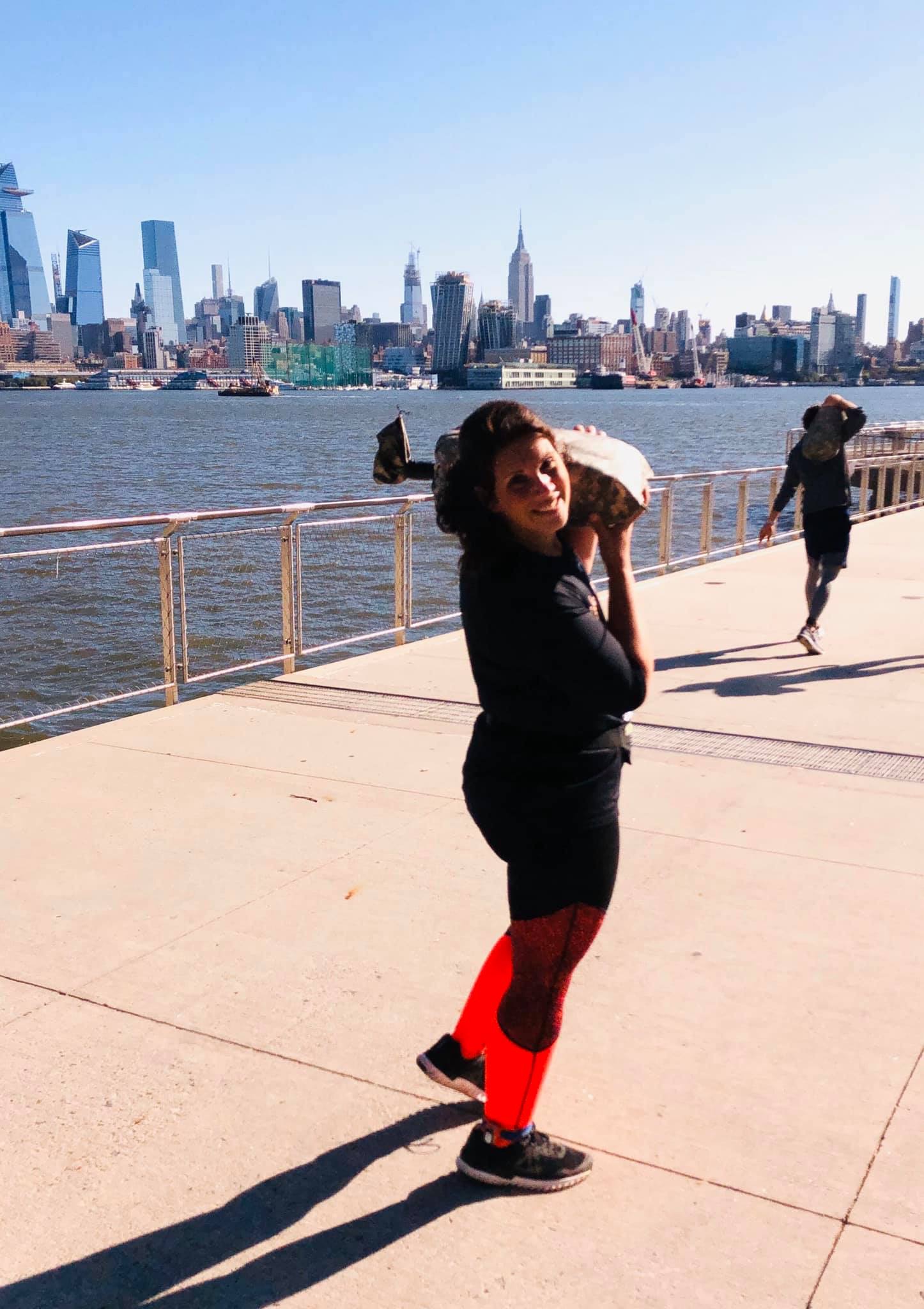 Tricky swiss is fun and it consists of floating boards with holes for your hands and your feet and you need to navigate your way from one to the next with rings in between two of them. It's a nice upper body obstacle and really makes use of your core. I'm going to be honest here: Gibbons by Force5 was an obstacle I just walked right by and did my 15 squats as the penalty. I was intrigued by it and knew some people would love it, but my arm strength is not there. There were hanging handles and sticks you took from a box. As you moved along you were supposed to put the stick in the handle and then use your other hand to reach and put another stick in the next handle, then take out the first and move it to the next all to help you get to the end. KUDOS to those who completed this obstacle because it was very American Ninja Warrior. 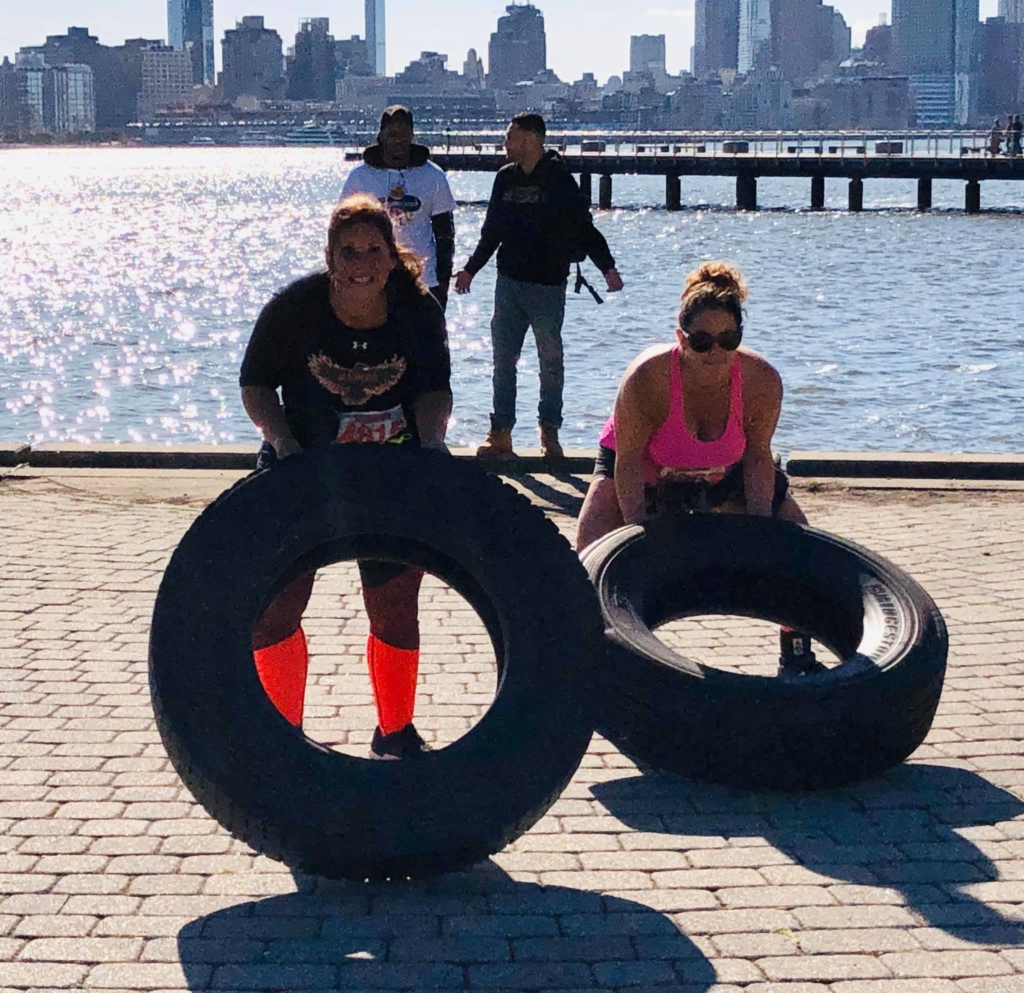 Then the race ended with the Urban Cliffhanger which is another ANW obstacle that had me doing squats. This is the one that has hanging bars to some spinning wheels. I love watching people do these and my son  Jack said he did it and I really wish I got to see him. But as always he was waiting at the finish line for me with a “What took you so long mom!” face on.

All day, the volunteers were bright and cheerful, and the little girl at the finish line who handed me my medal was no exception. The fastest time for the day for a male was Nicholas Eichhorn with a time of 25:09 and for a woman it was Racquel Wagner with a time of 35:50.  Jack finished in 38:49 and I would like to see him run in a competitive heat in the future. I finished in just over an hour, but my friends and I took our time taking advantage of the great photo ops the gorgeous views afforded us. 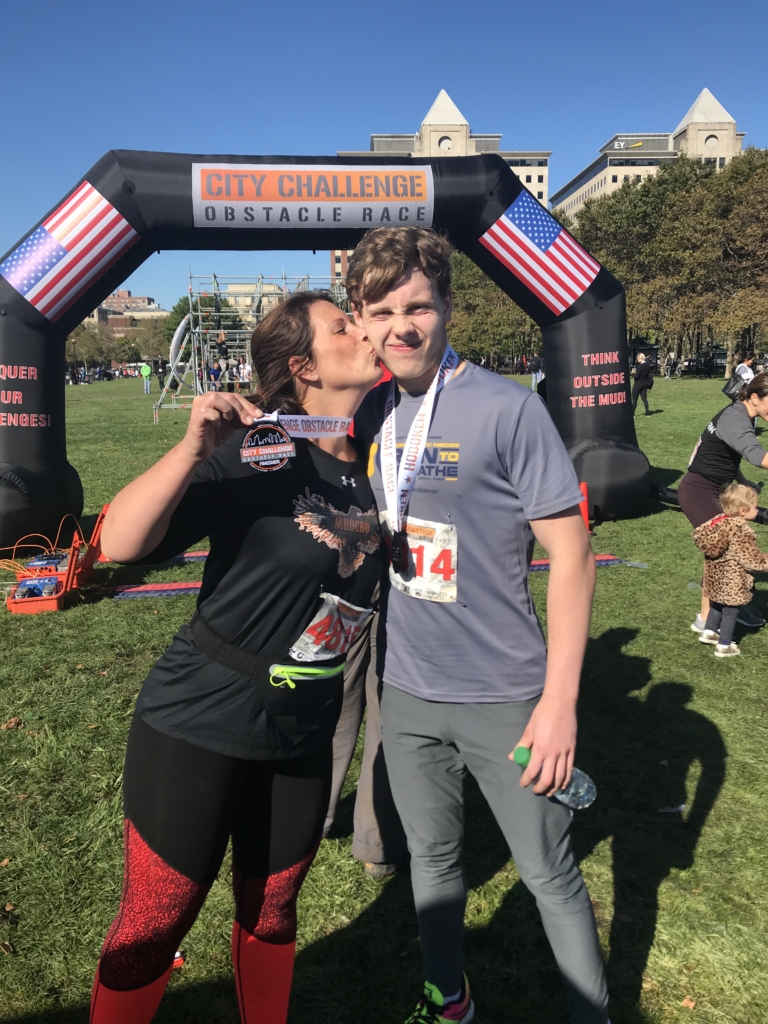 For the first time ever, City Challenge Race offered a special Tri-City Medal for those who competed in three or more different events. There was a Wellness Village set up with a couple of different tents. I spoke to Katie Purcell at her tent where she had information on her company Fierce Gear OCR which is a one-stop-shop for race day fuel and nutrition. I picked up a delicious honey stinger waffle from her and I sampled some really tasty  Chameleon Cold Brew at another tent. They offered a variety of fair trade and organic black coffees as well as their pre-bottled oat milk java. 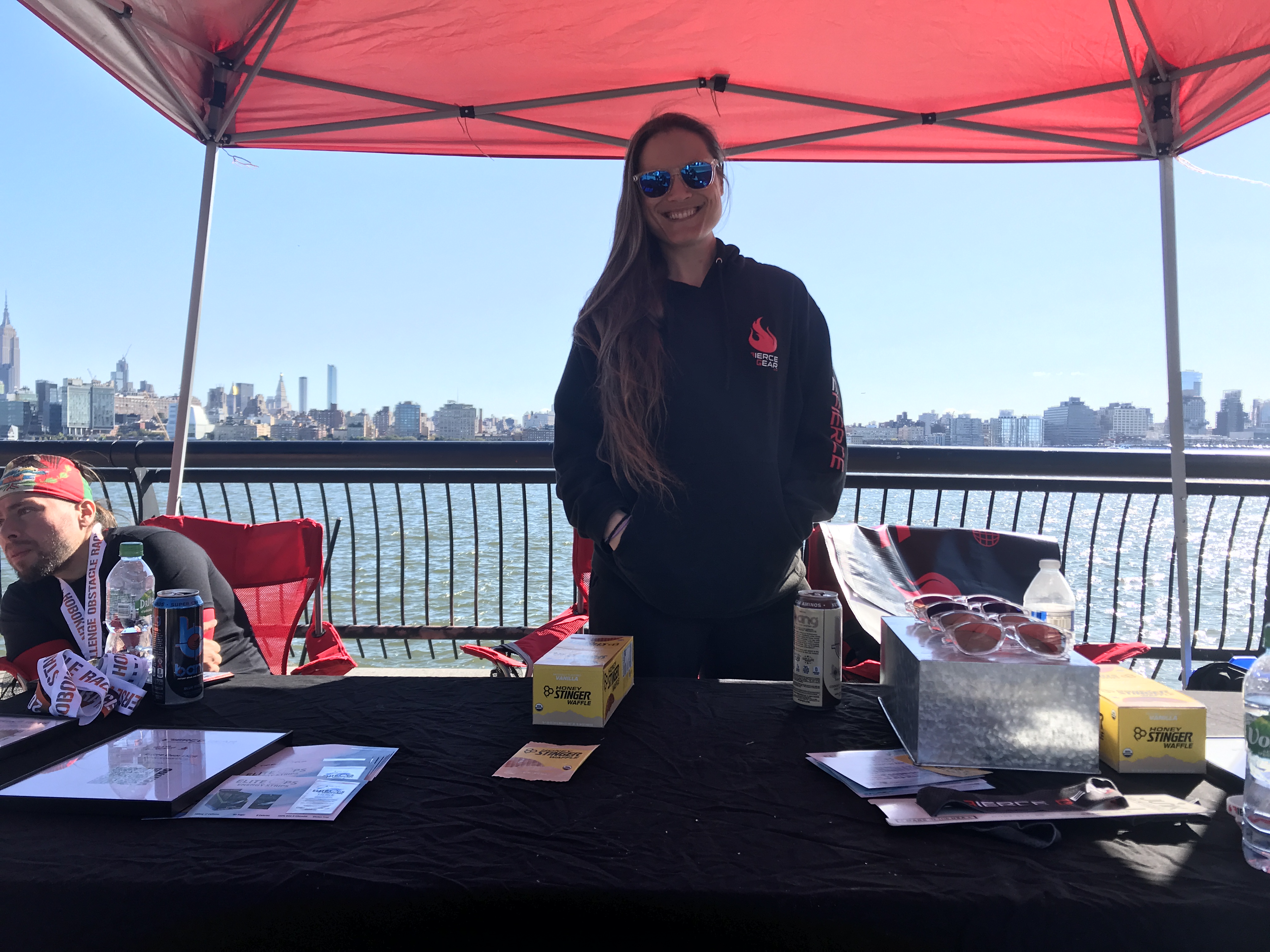 I am so glad I didn't count this race out because of some unfortunate events in April. Elvi and his team could not do anything about the weather that day, it was just another obstacle thrown at all of us, and I'm glad I realized that. Had I not given them another shot  I would have missed out on a fun morning spent with friends and another chance to make memories with my son. See you on the course!

This author is part of the Mud Run Crew and received a free race entry in return for an independent review. All opinions are those of the author and were not influenced by the race sponsor or Mud Run Guide.
By Tara Skinner|2019-10-08T00:18:32-04:00October 8th, 2019|Race Recap|0 Comments