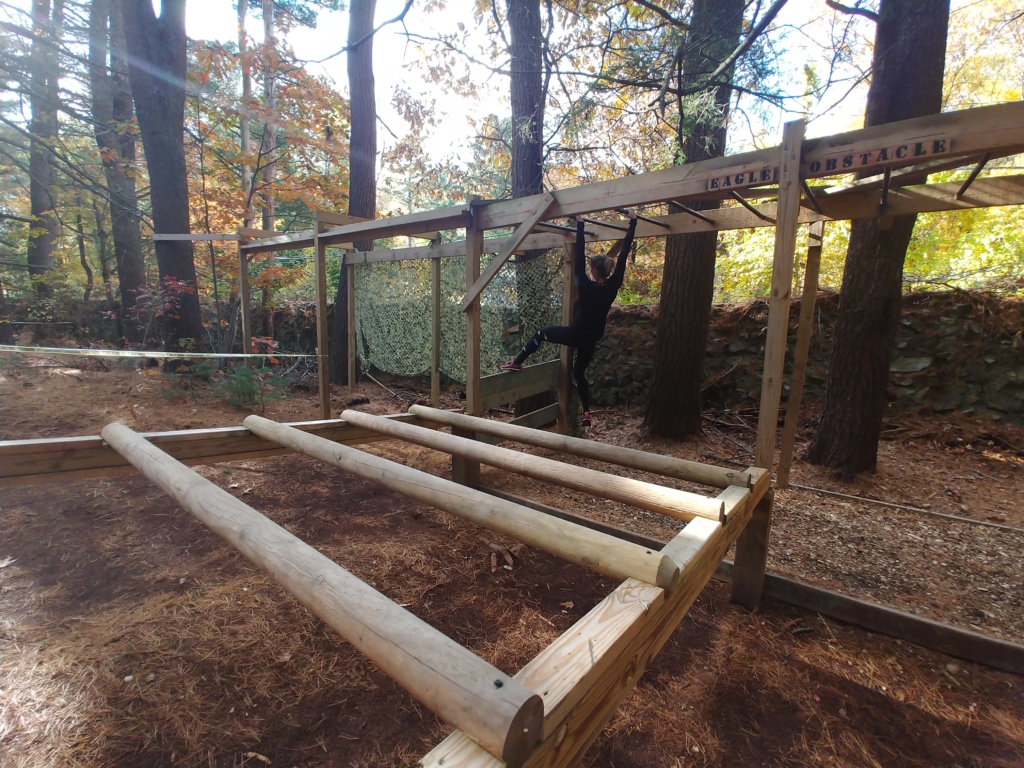 Over the weekend of October 26-27, as most of us begrudgingly began our approach to the end of the 2019 OCR season, Eagle Obstacles of Dedham, MA offered a unique experience to those participating in their Great Pumpkin Challenge. Many racers in this area still have one or two races left before the assault of winter, and The Great Pumpkin Challenge turned out to be the perfect event to get in some solid obstacle training to prepare for their final races of the year.

Was this a race comparable to other obstacle course races? No. In fact, it wasn't a race at all. It turned out to be a day of meeting new people and making friends, having fun and laughing nonstop, and testing thirty man-made obstacles (with a Halloween and pumpkin theme) that seemed to get progressively more difficult and taxing on both grip and upper-body strength. I expected this challenge to take 30-45 minutes out of my morning. Somehow I was there for over two hours.

The course was located on the woodsy grounds of the MIT Endicott House in Dedham, about thirty minutes from Boston and fifty minutes from my home in Worcester, MA. On the ride there, there were some dark clouds in the sky, so I obviously was just hoping that the rain would hold off until the next day so I wouldn't have to deal with wet, slippery obstacles. By the time I arrived and got on the course, it had become the epitome of a perfect autumn day. It was about 60 degrees, the sun was shining, and the air was still. It also didn't hurt that the fall foliage was at its peak. The day was nothing short of perfection. I can really only say one “negative” thing about Eagle Obstacles, and that is there was no signage whatsoever, for the obstacle course nor the parking. I had been there once before, so I eventually remembered what to park, and where to walk from the parking lot to find registration. I would love to see them put a sign up on the main road so people know that they're there, and even a hand-written sign in the parking area would have helped people know they were parking in the right place. As of now, I don't know how anyone even knows that they're there. The plus side was that parking was free of charge. And, it was only $25 to register for the event.

There were only three other people starting the challenge with me, but there were other groups not far behind us. A quick shout out to Barry, Jason, and Betsy. We all immediately became friends, and I soon realized be would be doing this ridiculously fun course together from start to finish. I'm used to running OCR alone, so it was refreshing to meet some friendly, encouraging people and stick with them for the whole course. 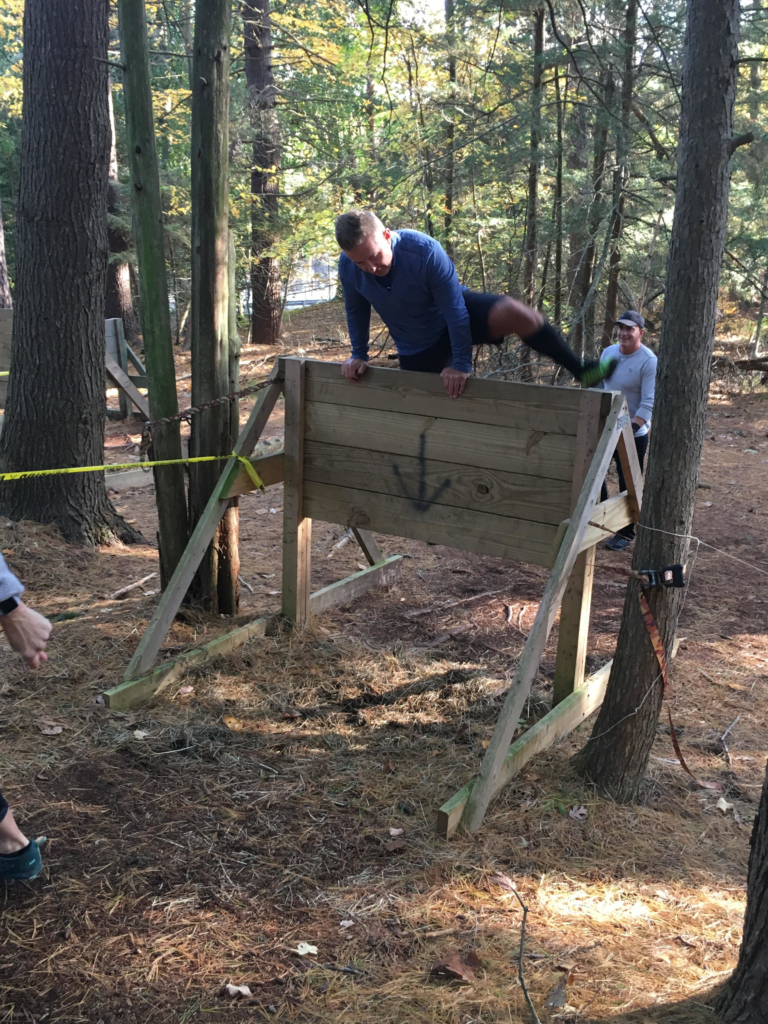 Jason hopping over one of the 4-foot walls near the start of the challenge.

Eagle Obstacles is a family-owned OCR training ground open every weekend during racing season. This was the last weekend of their season. The power-couple Broc and Kaylin Boileau are the owners and two of the nicest people I have met. They also orchestrated the whole event on their own. I had been to one of their events two years ago for a 5K obstacle race. It was raining and cold that day, and there were only two other people racing in my heat. Kaylin explained that since then she has managed to create more of a social media presence, which has helped them get bigger turnouts in their more recent events.

When it comes to the course itself, Broc is a one-man show. He builds each obstacle by hand, sets it up for the season, then breaks them all down at the end of the season. Each year he changes the layout and creates new obstacles, some of which are inspired by obstacles you see at the bigger races or American Ninja Warrior. This event was only a mile long, and there wasn't much running because Broc had packed in thirty obstacles. Each obstacle was only a matter of yards away from the next.

Broc was out there on the course all morning and afternoon directing athletes where to go, showing them how to do the obstacles and giving them options to make them more challenging, and resetting obstacles for the next groups. In fact, since I was in the first heat of the day, Broc led my group through at least the first half of the course. I was pleased to learn more about what Eagle Obstacles is all about, and how hard Broc works being a one-man show when it comes to the building and deconstructing of the obstacles. It is quite impressive. 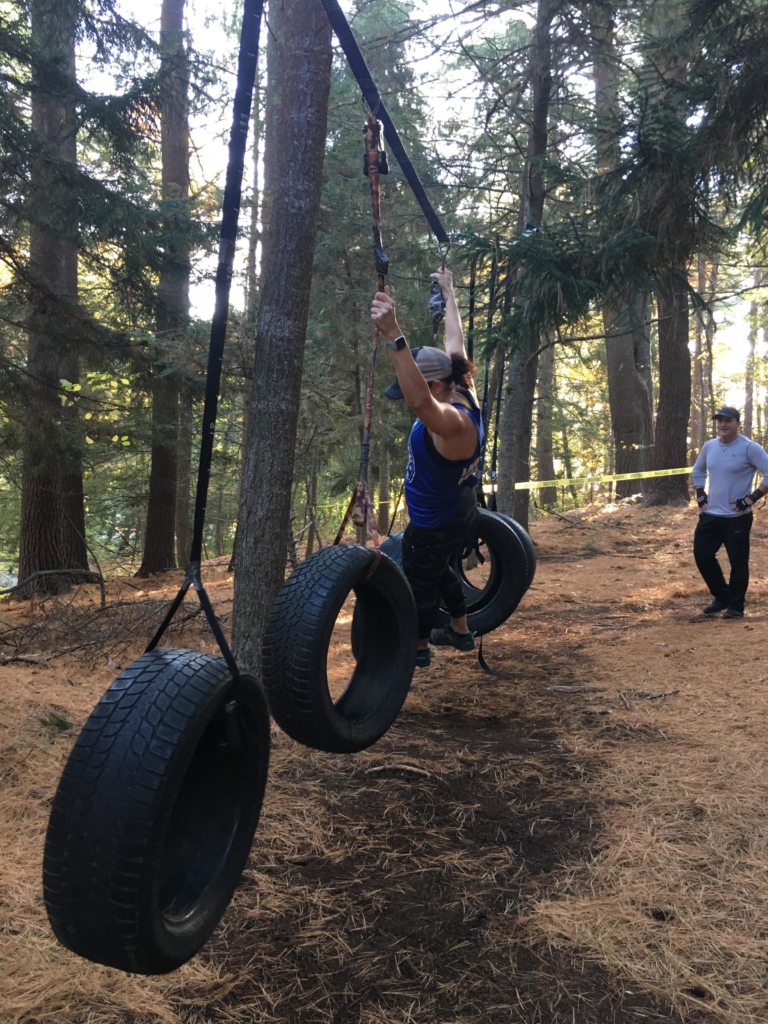 Betsy flying through the tire swing.

Now, let's get to the obstacles, for which Broc deserves a round of applause. First of all, there were thirty of them on a 1-mile course. Many of them you would recognize, like the monkey bars, rope climbs, rope traverses, a Hercules hoist, a sandbag carry, Olympus, a tire flip, a spear throw, an inverted wall, and even an 11-ft wall. One of the most notable obstacles was the peg board. There were two peg boards, each built on a large tree trunk. You had to make your way up the board and then back down. I was so spent by the time I got down that I literally just stood there hugging the tree for a few seconds.

Another obstacle that stole the show didn't have a name on the course map, but there was a horizontal beam with holds similar to what you would see at a rock-climbing gym. There was only enough room for your fingertips, and you had to traverse across them without any help or support for your legs. It demanded a great amount of grip strength. The other obstacle that stood out was the log ladder. Without touching the ground, you had to maneuver your body over and under these elevated logs. It was awkward and took some concentration, and got us all giggling as none of us looked very graceful. 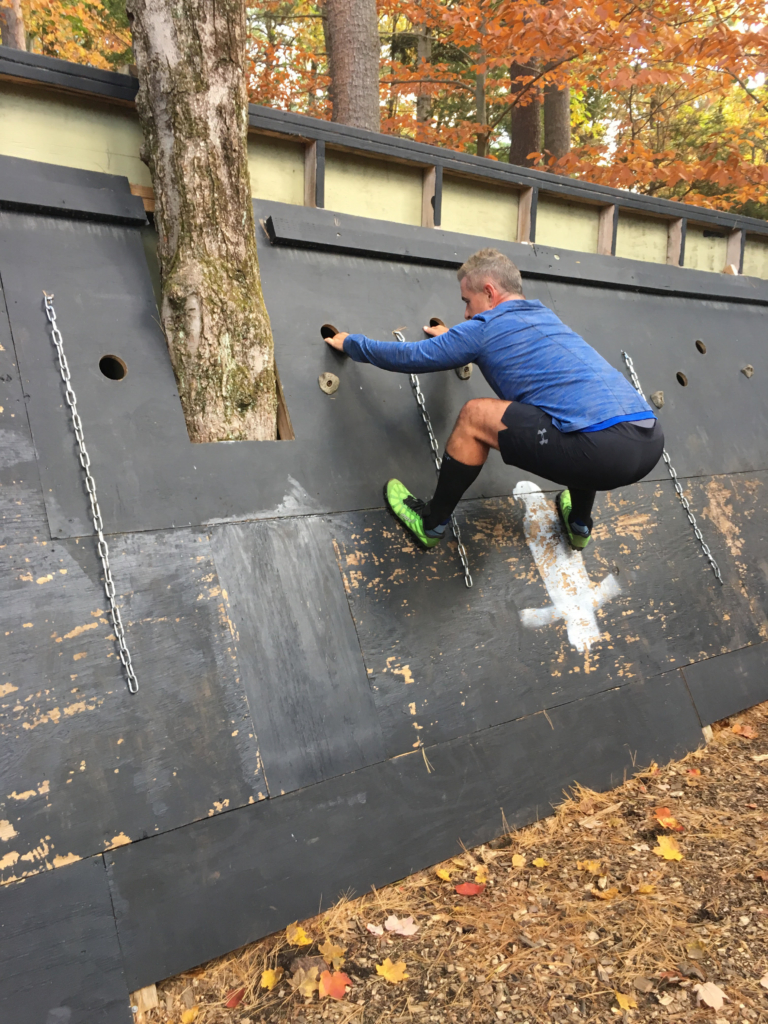 All participants received a medal featuring an eagle for completing the challenge. There was no festival area, but they did offer water bottles on the course and candy on your way out. If you're looking for a timed, competitive race, then this isn't the event for you. However, if you're looking to get in some solid training for your next race, want to test out some unique, challenging obstacles, or maybe just want to have a fun, more laid-back Saturday with some friends, then this event is right up your alley. Eagle Obstacles is now closed for the season, but Kaylin assured me that they will have more events next year. They also host birthday parties and bachelor/bachelorette parties, offer raft building classes, scavenger hunts, and team-building games. Overall, I had a blast at this unique challenge and was quite sore afterward. While Eagle Obstacles is a small, local venue with a ways to go when it comes to getting the word out and becoming acknowledged in the OCR world, it is on the right track. It's amazing how one can feel such a sense of community in an event so small. If you live near Boston, or anywhere in Massachusetts, check out Eagle Obstacles at some point during your 2020 racing season.

This was a difficult event to rate because it was so different from anything I had done in the past. I would rate the obstacles at 4.5/5. My rating for the event itself would be a 3/5, and I can see that going up significantly once they get more participants and more organization.

About the Author: Amanda Woodman

OCR is my life. I run about 10-15 races a year, pushing myself to complete more endurance events each year. Next year, my goal is to complete a 12-hour Spartan Hurricane Heat. I train with my other passion, Crossfit, 5-6 times per week. I also enjoy rock-climbing and hiking. I work full time as a bartender and have a Bachelor of Arts Degree in English. I live in Worcester, MA with my boyfriend, Matt.